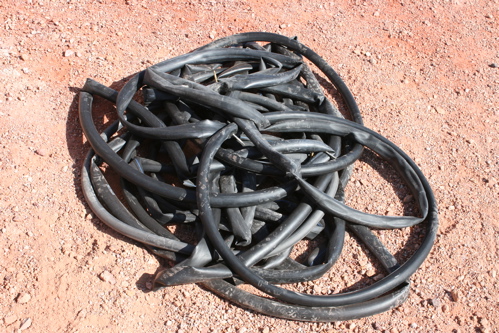 There’s been a good discussion on the forums over the past couple weeks about flat mountain bike tires and judging by the comments you might think some riders just have bad luck on the trail. In reality, though, the cause of flats isn’t usually a big mystery and by following a few tips you can minimize your chances of losing your air on the trail.

This was my biggest lesson when I moved west to Colorado and started getting flat tires every time I rode trails like Palmer Park and Ute Valley. It turns out my tires were chronically underinflated leading to annoying pinch flats on rocky, hard trails. Overinflation can be a problem as well but these days I keep my tires rock hard, just under 60 psi. And hey, if you don’t like riding hard tires I suggest investing in a plush suspension system – don’t expect your bouncy tires to do all the work without a little complaining every now and then!

# 2 Mount your tires and tubes properly

Ever change a flat tire only to get another one within minutes? It’s probably because you didn’t seat your tube properly or you didn’t check the inside of your tire for sharps. Installing a new tube isn’t rocket science but you need to be methodical about it to minimize the risk of future flats. Run your hand around the inside of both sides of your tire to check for sharp objects before getting that new tube anywhere near the tire. Also check the inside of the rim for spokes or nipples that may have pushed through your rim tape. After seating your tire on the rim (but before inflating the tube!) check both sides of the wheel between the rim and tire wall to make sure your tube isn’t caught in between. I like to start at the valve to make sure I go all the way around the tire. When I hit the valve, I flip the wheel and check the other side before inflating.

This is perhaps one of the easiest ways to avoid flats but it takes discipline. I’ve heard all kinds of stories about trails that are just flat tire magnets because of sharp rocks, cactus, you name it. No matter where you ride sharp stuff is never far away from the trail, though it’s usually not directly ON the trail. So sure, if you drift to one side of the trail and hit a cactus or yucca plant you’re gonna get a flat tire. Ditto for sharp rocks – avoid them if you can. It’s not the rock or cactus’s fault when you get a flat – it’s your for not avoiding it!

# 4 Ride aggressively at your own risk

For a lot of riders flat tires are the direct result of aggressive trail riding so if you’re an aggressive rider flat tires are really just a part of the game. Of course wise line choices can help but at high speeds it’s often tough to distinguish between a cactus and a soft bed of moss. On a balls-out solo ride I once got a flat (and taco’d my rim) after attempting to speed hop a rocky gap – an expensive lesson for sure. Even riders who aren’t necessarily aggressive (think Clydesdales and guys on 45+ pound rigs) need to be careful to avoid unnecessary flats – but oftentimes they just come with the territory.

I’ve been pretty lucky (or smart, depending on how you look at it) avoiding trail flats over the past 10+ years despite riding in some pretty prickly places including the deserts of southern Utah, the rocks in Colorado, the sand burrs and palms in Florida, and the rocks and roots in the southeast. I can literally count on one hand the number of trail flats I’ve had and I think it has a lot to do with learning from past flats. So the next time you get a flat tire on the trail, stop to figure out WHY – you’ll probably avoid the same problem next time!

Gear
The Schwalbe Magic Mary is a Household Staple for Good...
Gear
Review: WTB Vigilante 27.5 Tires
Gear
Trailside Repairs: How To Fix A Flat Tire
Gear
Slip Me Some Skin: The Importance of Trying Many Tires