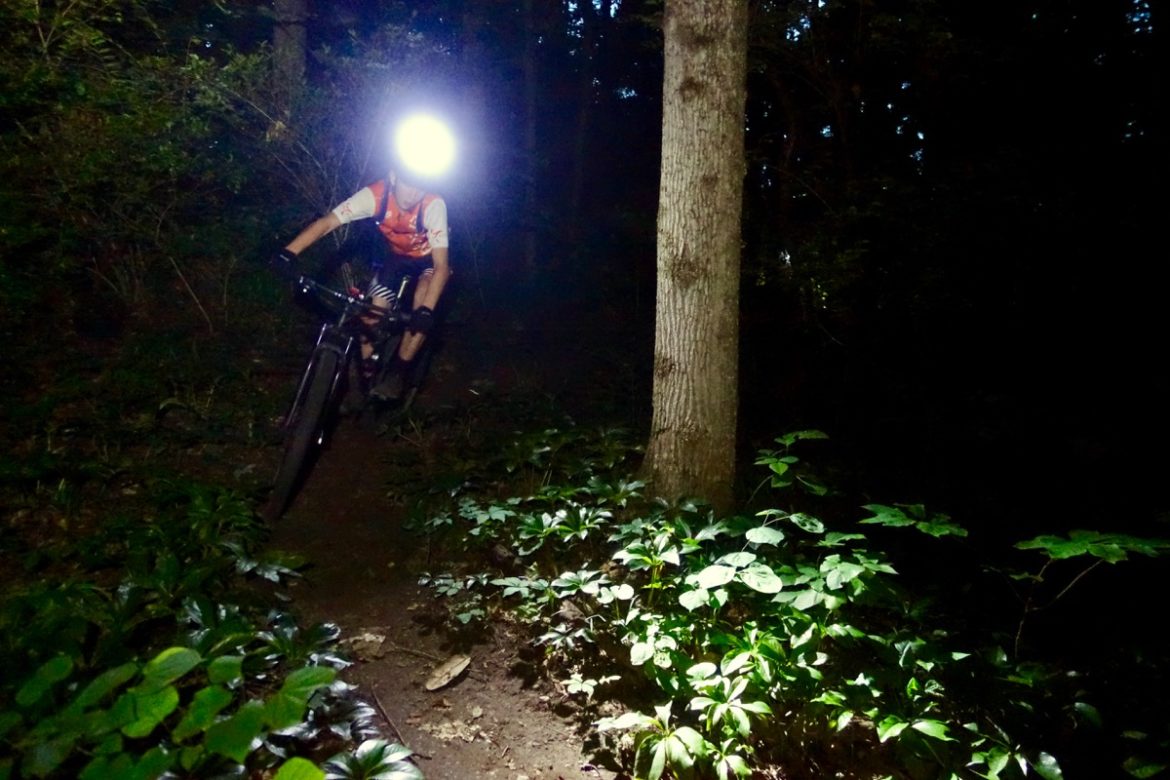 It’s a question we hear from Singletracks readers all the time: How bright does my light need to be for mountain biking at night? As always, the answer depends on a number of factors. The conventional wisdom says the brighter the light, the faster the rider can navigate the trail, but is this true? How much faster can a rider go with a brighter light?

Obviously this test occurred at night, in the dark, on a singletrack trail. The test loop itself has a little bit of everything: twisty sections, techy bits, wide open areas, climbs, and descents. Mike and Paul were our test riders, and they took between 3 minutes, 16 seconds and 4 minutes, 2 seconds to ride the approximately half mile loop.

We hypothesized the riders would get slightly more tired after each lap, which could cause them to slow down, regardless of the light configuration. However, we also guessed the riders’ speeds might increase a bit as they became more familiar with the course. It was possible these two would cancel each other out, but it was also possible one effect would be greater than the other. 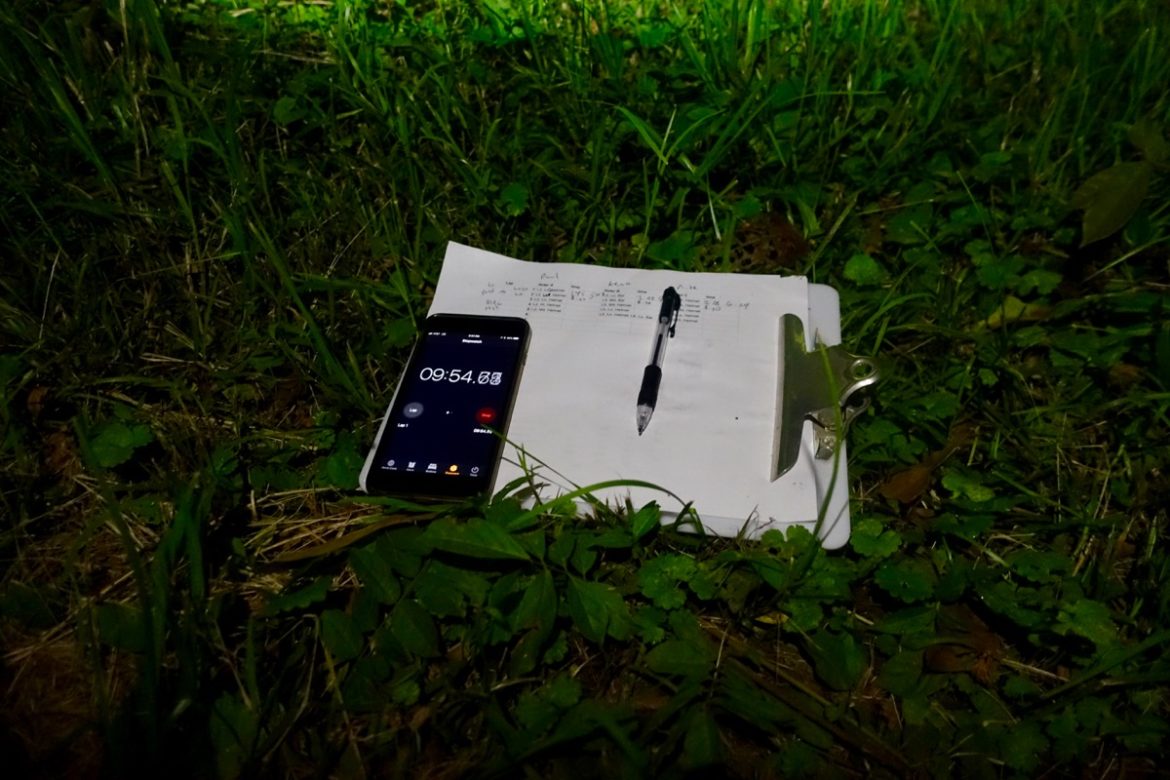 Both Mike and Paul ran the lights on their helmets for each test, and each used different lights which accounts for the various maximum and minimum lumen counts on the chart. 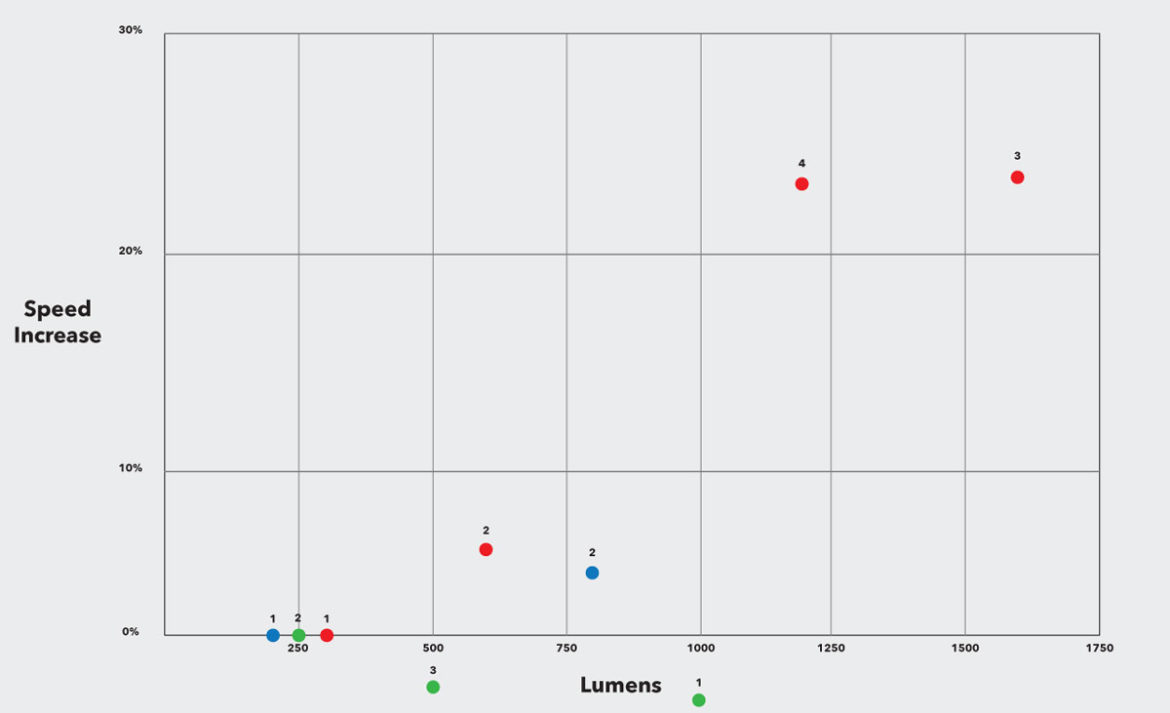 Looking at the chart above, Paul’s dots are red while Mike is shown in blue and green. (Mike tested two different lights with slightly different maximum and minimum brightness settings.) 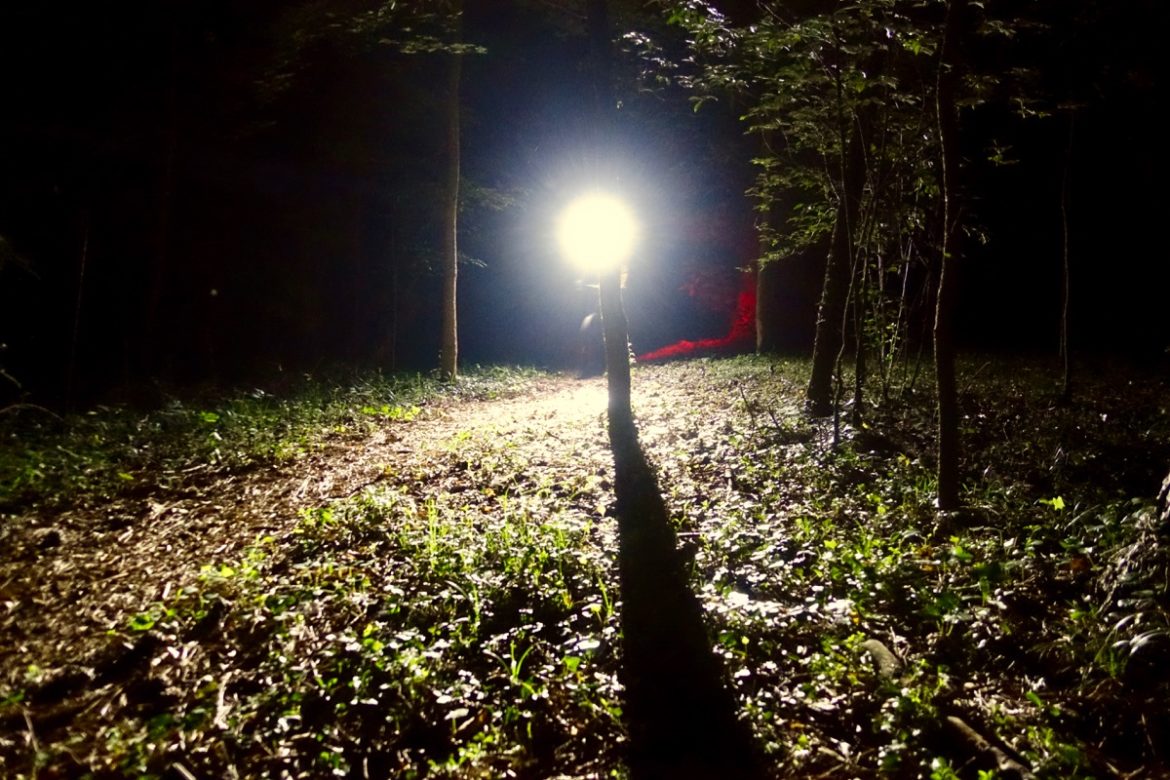 It’s interesting to note that Paul’s times seem to plateau once he hit 1200 lumens on the helmet light. That is, he didn’t get much faster going from 1200 lumens to 1600 lumens. There are two possible explanations here.

First, once a rider has “enough” light, additional light doesn’t help as much. This is the rule of diminishing returns, which seems fairly plausible. Riders only need to see so far down the trail, and beyond a certain distance, trees and obstacles tend to block trail views whether it’s day or night.

Secondly, Paul’s 1200 lumen run was his last, which means he was more familiar with the course on this run than on his 1600 lumen run. So, it’s possible the 1200 lumen run might have been a little slower if we were able to normalize the times somehow, leading to a more linear result. 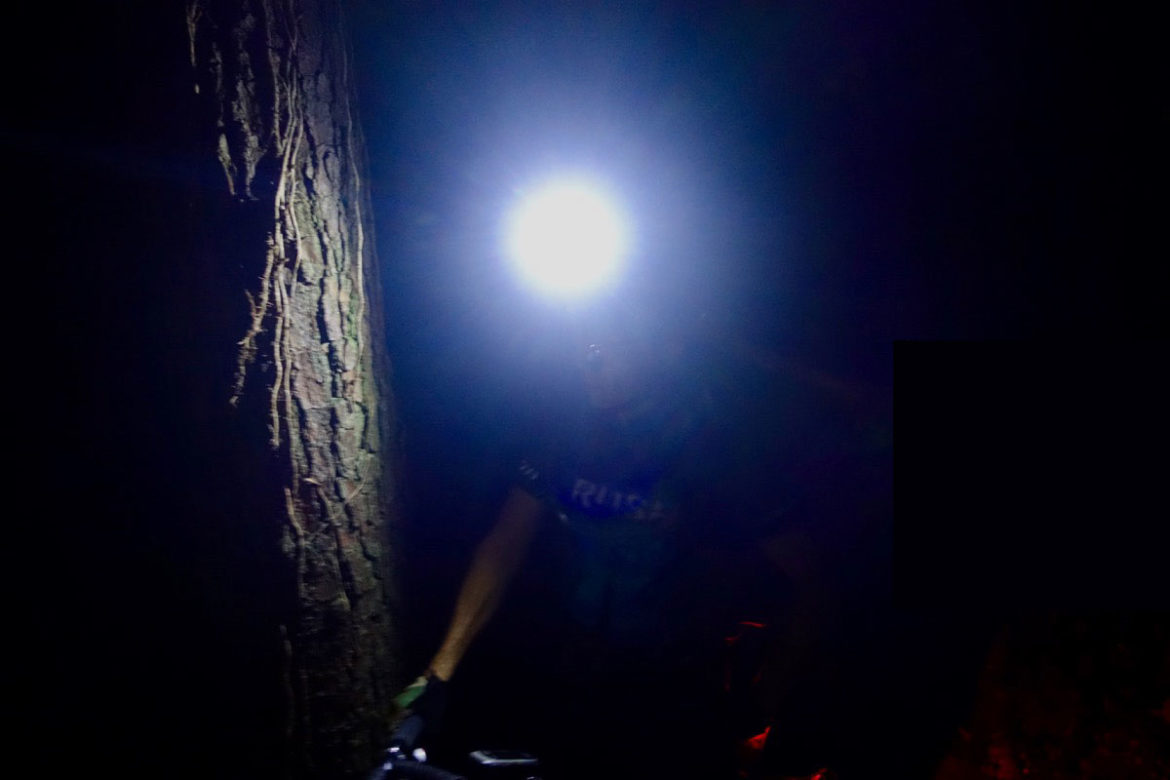 Mike actually tested two separate lights over the course of 5 laps, and his results were a bit mixed. For the “blue dot” light, the results were as expected. At 800 lumens, Mike rode about 5.5% faster than he did at 200 lumens. That’s a big jump in brightness, so it’s surprising he wasn’t much faster than that. Add in the fact that the brighter light came during a later lap, and that gain is even smaller. But, it’s still a gain.

For the “green dot” light test, Mike’s results are puzzling. He actually got slower the brighter the light was set! How is this possible? I have a few theories.

Mike completed his first lap with the light on high (1,000 lumens), when his knowledge of the course was at its worst. All else being equal, we expect riders to get faster with each lap as they learn the course. Still, this doesn’t explain why his third lap, at 500 lumens, was slower than his second lap at 250 lumens.

Mike was the most consistent in terms of his speed overall, with a spread of just 16 seconds between his fastest and slowest laps. (Compare that to Paul, whose spread was 46 seconds.) It’s possible something else, other than the brightness of the light — like stamina or even the fact he was riding a rigid mountain bike — limited his speed, more so than the brightness of the light.

The 250 lumen test lap seems suspiciously fast, for reasons unknown. This lap was 9 seconds faster than his 200 lumen lap, despite a negligible bump of just 50 lumens. A timing error or even a course shortcut could have been at play.

Admittedly the results aren’t decisive, but we did gain some key takeaways about mountain biking at night.

While Light & Motion agreed to sponsor our test, they didn’t influence the results in any way, and this isn’t meant to be a ploy to sell you on a brighter light. If you’re skeptical, by all means, run your own test and let us know what you learn!

Your turn: Have you found a sweet spot in terms of light brightness for trail riding? If so, how many lumens are “enough” for you?

Community
Night Rider: A Tale of Battling the Dark by Mountain...
Gear
A Cheap Chinese Bike Light Nearly Burned Down this Rider's...
Singletracks
Last Week to Check-in To Win // Singletracks Hats Added...
Progression
MTB vs. Road: How Much More Effort Does Mountain Biking...

Gear
You Have $5,000 to Spend on a Mountain Bike. Which...
Gear
The Shimano GRX Drivetrain Brings Familiar Mountain Bike Tech to...
Gear
Never Underestimate the Power of a Good Zip-tie
Progression
Sizing Up or Down Plus Handlebar Widths and Crankarm Lengths:...
Subscribe
Login
Please login to comment
12 Comments
Most Voted
Newest Oldest
Inline Feedbacks
View all comments

It would be interesting to see a study that compares not just lumens but also beam shape. My 800 lumen light has a circular beam shape with a bit of a dead spot right in the middle. It seems there’s plenty of light for what I need, but 1/2 of it shines up into the branches of the trees. If I angle the light down, then I get too narrow of a beam out at the distances I need.

That could definitely be interesting.

Stay tuned because next week we’ll look at light mounting positions: helmet vs. bar vs. bar and helmet.

I find that the type of light you use matters a lot more once you get over 600 lumens. For instance you have a light with a spot beam vs a wide beam pattern. Ive ridden a lot of trails at night and this includes roads, and a lot of MTB singletrack scouting (first ride on the trail ever) and some bushwacking old trails at night also.

I have a 5000 lumen dual led light that is a only a spot beam pattern on both LEDs that is great for night road riding as i can see far down the road straight but is inadequate for night trail riding because i need to see the sides of trail. For trail rides i make sure to have a wide beam pattern, the one i use is same 5000 lumen model but one LED has spot and one is wide angle lens and it helps tremendously. Also for trail rides, i also supplement with 2000 lumen helmet light as trail conditions necessitate but thats a spot only so i can see where im directly looking at, in addition to the spot/wide handlebar mounted light. All these run on 2×18650 size lithium batteries for head mount, and 4x 18650 batteries for handlebar mount.

Jeff, please take this as a fun poke, because typically I enjoy your articles. But that was a lot of words to say absolutely nothing, seemed like you were obligated to post it.

Haha. Well, initially I assumed there would be a definitive answer but it turns out there are many factors at play here. Unfortunately we found there is no easy answer to the question. But we did gain some interesting insights!

I always wonder why there are so many questions about the ride prep than the actual ride. Lumens schumens…Grab some ducttape and a flashlight if you need just get and and go. It is always more awe inspiring doing it on a full moon and guessing the line right?! Sorry just making light of the article..????

I have 2 lights, fenix bc30r 1800 lumens on bar and nitecore hc70 1000 lumens on helmet. They are plenty of power and can operate at high mode about 2 hours that is enough for a night riding trip.

actually it is the amount of batteries you are prepared to bring that is the real limit of how much light output you may get.

in my experience 1400 irl lumens will drain 4×18650 batteries in about three hours. if you want more light than that you need to bring more batteries. for trail use a total of 2-3000 lumens is fine.

Too much fuss about lumens.

I just want to extend riding hours into evenings, I certainly don’t need a KOM at night.

I find that some not-so-expensive NiteRider models, like a 300-550 lumen model is just fine. I use 2 lights (bar and helmet) and rarely turn them up to the brightest setting, So really, I’m probably running 200-300 lumen dual lights and I find it completely adequate without breaking the budget.

if soil is dark and wet its beneficial to have a good deal more than that, especially at high speed.

in snowy or sandy conditions it would however be totally adequate.

From personal experience, the spread of the beam makes as much difference as the brightness. A dimmer light that casts a uniform light where I need it is better than a bright light with spotty coverage.

Before you tested the lights you need to have a base to work from. Like riding the loop in daylight and get some times then go back out when dark and do the same again that way you will have daylight and nighttime figures to compare. That way you’ll end up with more meaningful numbers.