Guerrilla Gravity (GG) has developed a new bike to satisfy customers who have asked for a longer travel Trail Pistol or a bigger-wheeled version of the popular Megatrail. The “Smash” as it is known, is inspired by rock n’ roll roots (like all of their bikes), in this case punk legend Joe Strummer. After the success of the original Megatrail, which accepted both 26 in and 27.5 inch wheels, GG also made some big changes across their entire line of bikes including a second generation Megatrail, re-branding the shorter travel Megatrail SS as the “Shred Dogg”, creating the more trail-oriented Trail Pistol, and updating the GG/DH. The Smash fills the gap between the Trail Pistol and the Megatrail.

I met with lead engineer Matt Giaraffa one afternoon for a pre-launch spin on some local singletrack to pick his brain about the new model and what some of the changes mean for their customers.

Geometry chart can be found here.

I actually tested the updated Megatrail at a local demo event about a month ago and was impressed with how much better it handled than the first generation version I had on long-term review in 2015.  Particularly, improvements in climbing, traction, and cornering seemed to unlock some untapped potential compared to its already very capable predecessor.

The Smash was even more impressive, with a steep seat angle that added gobs of traction to the larger footprint 29-inch wheels. The long reach, combined with the short and wide cockpit, paired well with the 140mm Pike to provide an amazing amount of front end control and precision not commonly found on longer-travel 29ers. Compared to the other versions of the Megatrail, and most 27.5 inch bikes I’ve ridden, the Smash rides high and powers over trail obstacles thanks in part to a slightly higher 13.6-inch bottom bracket. I was impressed that I didn’t suffer pedal strikes in areas where I usually do, yet I didn’t feel I was so elevated that I couldn’t corner.

Matt explained that in order to keep the chainstays short and the bike playful, they abandoned the idea of an even longer travel rear shock because it lowered the bike too much and impacted climbing efficiency. After trying different geometry and travel combinations, GG felt that 140mm of travel was ideal for the Smash to climb with plenty of reserve to slay the downhill. I agree. They also worked to simplify things, which I feel is a much needed improvement.

In fact, gone are the four geometry configurations found on the Megatrail. The Smash simply has Crush and Plush mode, specifically tuned for uphill and downhill respectively. Matt said that Crush mode not only is the preferred climbing mode, but that it is also ideal for riders wanting more pop and snap on the downhill. Plush mode, on the other hand, was designed to allow riders to point the Smash through anything they have the guts to try.

GG also abandoned 27.5+ compatibility, engineering a purpose-built long travel 29er specifically for the crowd that asked for just that. Matt noted that the bike would have lost a lot of the trail characteristics they wanted to keep on the Smash by tweaking the geometry to accept plus wheels, so they didn’t. However, the Smash can accept 2.5 inch tires both front and rear (the newer 2.6 inch tires will not clear due to increased tire diameter), which is plenty of rubber for a trail/AM bike in any event. Matt keenly suggested that riders who want the option of plus-sized tires should gravitate toward the very capable Trail Pistol.

The Smash was ideally designed to run 140mm forks, but will accept forks up to 160mm, though Matt admitted it makes the front end wander quite a bit on steeper climbs. After climbing up parts of Apex, I think that is a fair statement. The 140mm rear can accept a variety of shocks. My test ride was equipped with a Rockshox RT3 and Matt offered to swap over to a coil shock. Unfortunately we simply ran out of time. We both agreed that a shock like the Push Eleven Six, for example, would make this bike unstoppable in places like bike parks. 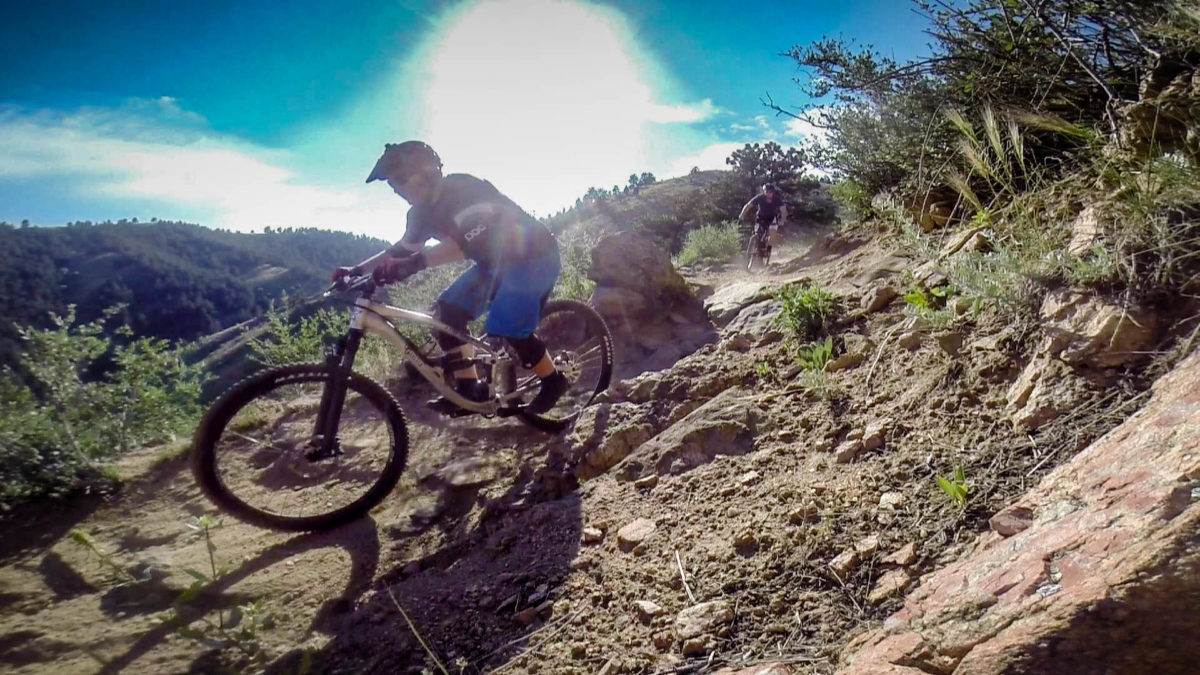 For such a big bike, and a big-wheeled version at that, the Smash feels spry when you climb into the cockpit and start out. Even with the first few pedal strokes I could not believe how quickly it engaged, and how eager the bike seemed to get going. The ergonomics felt spot on and the geometry encouraged a comfortable upright position to sit, open up the thorax a bit to breathe, and climb.

The test bike had 140mm of suspension travel front and rear, a combination I personally feel ideal for any well balanced “trail bike”. The Smash gobbled up obstacles and smoothly rolled over the brutal rocky sections with a grippy footprint that did not disappoint, even in the dusty July heat. It also had no reservation charging tight lines uphill, even at a crawl, and never wandered when pointed up 20-degree anaerobic pitches. I honestly thought the weight of the bike would feel a bit like a tank, compared to similar aluminum bikes I have tested, but it felt nimble and deft–an unexpected surprise considering the size. It certainly climbed better than the Megatrail, and was on par with the Trail Pistol 29er.

Having a short inseam of 30 inches, I have always struggled with sizing on 29er mountain bikes, and I have to work hard to maneuver them through corners. The Smash felt well suited for my size but it did feel somewhat awkward in corners compared to longer, slacker bikes like the Megatrail…which seems to rail corners when I am on it. On the more technical or tighter sections, I felt that I sat up a bit too high to lean into the bike enough to get through certain sections quickly. I found myself slowing down to adjust to this, taking wider arcs around rocky corners, and using a kind of body english I rarely have to purposefully employ on a bike.

That, however, is one of the trade-offs of all 29ers in my opinion, especially for shorter riders like me, and I’ll admit that if I owned this bike and rode it frequently I would probably get used to it. On the other hand, on smooth rolling, twisty sections, the Smash really came alive, and it was on these sections that I had the most fun. Overall I will say that the Smash does a much better job of mitigating the sit-up-high feeling that many 29ers have, and that unlike many if not most of them, the Smash felt right at home in most cornering situations, which impressed me quite a bit.

There is one thing I can definitively say about the Smash: it will roll over just about anything. Matt said they developed this bike to not only shred on local trails, but to bomb down nasty sections at bike parks like Keystone. Where there are some places I felt it lacked the finesse to thread the needle through lines at speed, I quickly learned that I didn’t have to. This bike is solid, and has the trail manners of a juggernaut on a rampage when pointed downhill. This is not a bike you force into cumbersome lines. Instead, it will dictate where it wants to go and convince you that the line it has chosen is the one you need to take. Trust the bike, the bike knows. Like all 29ers I have been on, it also takes some adjustment when moving this rig about in the air, but it will plant with confidence and soak up sloppy hits when you ride harder than you should.

As a rider with a short inseam I’ve admired riders that can rock long-travel 29ers given all the benefits these bikes offer. After testing both the Megatrail and the Trail Pistol in long term reviews, this bike is for those GG customers who have been pining for a Megatrail 29er. It is a bike for anyone who wants a solidly built, American-made, beast of a bike that can rally hard and doesn’t feel like a tank going uphill. The Smash launches Monday, July 17th and can be ordered by contacting Guerrilla Gravity or ordered at your LBS via their Shop Direct program.

There are three build kits priced at $3,295, $4,295, and $5,295 USD. Framesets start at $2,095.The staff at GG work closely with riders to customize bikes based on customers’ needs, and have a reputation for going above and beyond to create the exact bike that their customers are looking for.

Thanks to GG for sending the bike over for review!

Check out some of the other photos of the Smash below:

So since the rear is offset 3mm to the driveside, does that mean I can use a boost kit with my non-boost wheels and not have to re-dish? That would be great so I could still relatively easily swap wheels between my current bikes and build this up from a frame. I already have some nice carbon 30mm ID wheels with DT Swiss hubs, so they do have a boost kit available.