Before I get into the nitty gritty of how the Gravity Dropper Turbo performs, I’d like to take a minute to explain why the heck you would wantto buy a dropper post in the first place. For those of you who already consider yourselves dropper posts fanatics, feel free to skip down to the “Specs” section. 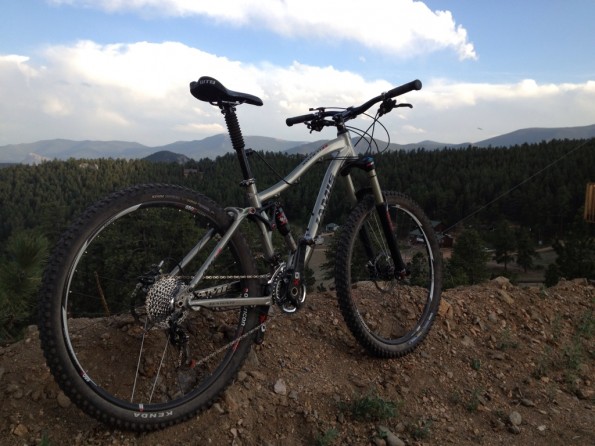 In the most basic sense, when you are riding technical terrain, creating more room for the bike to move under you allows you to negotiate bigger obstacles more easily. Without the limitiation of a mile-high seatpost, your arms and legs are free to work like suspension, letting the bike flow with the trail while your upper body stays quiet, moving straight down the trail. Think about it: on a normal trail bike you only have 4-6 inches of suspension in the bike itself, but your arms and legs can add much, much more give and take in highly technical terrain.

Additionally, getting your butt off the saddle and weight onto the pedals drops your center of gravity, increasing your stability on the bike. This also works with the seat up, but with the seat dropped out of the way the temptation to sit down is greatly reduced.

Even when the terrain isn’t super gnarly, getting the seat out of the way on smooth downhills can really aid in your cornering technique. As I learned at the BetterRide camp, proper body position while cornering requires you to lean your bike over and pivot your hips to the outside of the turn (something I need to work on more). However, with a seatpost in the full upright position, it is impossible to achieve proper the cornering stance. But dropping the seat out of the way with a dropper post solves this problem. 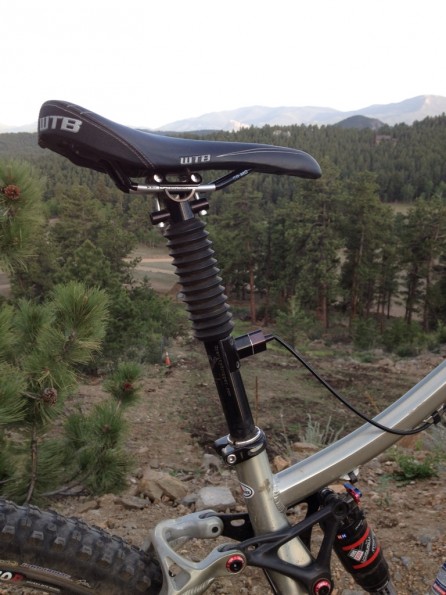 I tested the Gravity Dropper Turbo 4-inch drop model. It is also available in 2- and 3-inch drop varieties, but if you have enough room available to go with the 4-inch, do it!

The post is cable-actuated and entirely mechanical. Unlike hydraulic posts that need to be serviced at regular intervals, the Turbo is sold as one complete unit and is designed to work for years without any service or maintanence. With my general lack of mechanical skills and no desire to unnecessarily tinker on my bike, this is my kind of product!

While some hydraulic posts allow you to pause the post anywhere in its stroke, touted by marketers as “infinite adjustability,” the Turbo has just 3 positions: full up, 1-inch drop, and full down. I found myself using full up and full down almost exclusively.

Made from lightweight CNCd 7075 T-6 aircraft aluminum, this post is designed to stand the test of time. A rubber boot covers all the moving parts to keep them free from grime on the trail. All told, the entire assembly (including cable, housing, and lever) weighs in at 470 grams–40 grams lighter than their Classic model.

As mentioned above, the entire unit comes assembled and ready to install. Despite warnings on the instruction manual that a certified mechanic should install the post, I found it an absolute cinch to put on my bike. The cable is already run through the housing and connected to the post and the lever, so all you have to do is bolt the lever on the bars, stick the post in the seat tube, and slap the saddle on top!

While almost the entire post is made out of aluminum, the backside of the clamp is made of plastic. It cracked the first time I tried to bolt it down, but I swapped it out with a metal piece from a set of old Hayes brakes that was the exact same size. The new piece has been working great.

Also, the two-screw design takes a little while to get the saddle fore-aft position and angle adjusted properly, but once you have it set up you’re good to go. 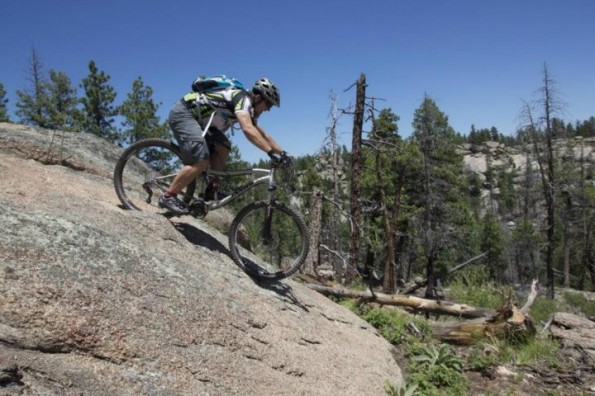 Seat dropped way out of the way as I roll this steep rock on the Blackjack Trail in Colorado.

I have had the chance to put Gravity Dropper’s Turbo seatpost to the test over the past several months. I have used it heavily on several different bikes, putting on hundreds of miles and countless drops and climbs. One thing is certain: this is one bomber piece of machinery!

I have had zero issues or complaints from the post. It has been such a breath of fresh air to have a bike part that requires no maintenance, no attention, and just plain works! I’m so used to stuff breaking or getting tweaked that having this post just work was marvelous.

Function is dead simple: when in the up position, push the lever, sit down, and the post drops into the down position. When letting it up, it’s best to weight the saddle a little bit before you push the lever because it will explode straight upward if you don’t! There are some fragile valuables up there too, if you know what I mean… but in actual practice, even if I don’t weight the saddle first, it usually ends up slowing down on the inside of my thigh before doing any damage.

At first, it takes a little while to get used to riding with a dropper post if you’re new to the concept. But after the initial adjustment period, the benefits to my riding have been immense. I’m to the point where I almost don’t want to ride a bike unless it has a dropper post on it. I don’t think I’ve become dependent on the post–rather, I now realize how much easier it is to ride well when I can get my body in the proper position.

Also, one significant benefit of the mechanical setup is that when the post is in the down position, the seat stays down, allowing you to hoist the bike by the saddle. I never noticed how much I did this when the saddle is down until I started using a hydraulic Joplin post recently which doesn’t stay down… and ever time I grab the seat and it slides up, I just wish I had the Gravity Dropper Turbo back on. 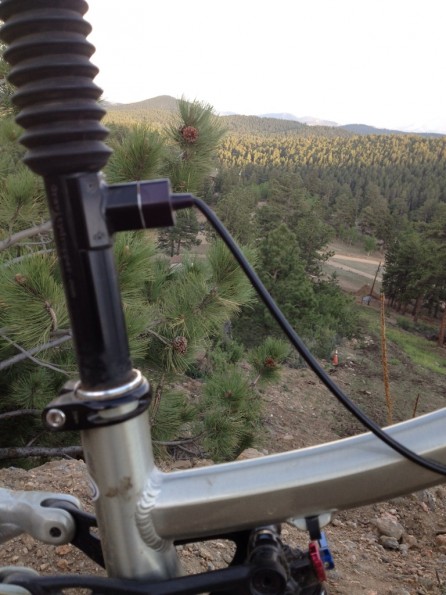 A sharp bend developed in the housing, but it did not affect performance.

Finally, there were two small quirks that I noticed: the 90 degree cable routing eventually caused the housing to get bent at the junction because the housing dropped down signifcantly to reach the top tube. I thought that it might start impacting performance, but it hasn’t. Also, I’ve found it hard to get the post into the 1-inch drop position: it usually either wants to go all the way down, or all the way up. However, I never really feel the need to drop my saddle just one inch. If I want to drop it, I want to get it all the way out of the way.

This is a bomb-proof product that performs exactly as advertised. I would have no qualms recommending a Gravity Dropper post to any of my friends! Thanks to the solid design and reliable performance, this post is guaranteed to see use on one of my bikes for many years to come.

Many thanks to Gravity Dropper for sending the Turbo over for review!

I originally thought seat droppers were another not-worth-the-money-or-effort convenience until I demoed a bike with one. It didn’t take me long to get one thereafter. Highly recommended, especially for folks who ride a lot of technical terrain.

One little problem–after a couple years, my first generation 3″Gravity Dropper sometime needs a little help getting back up. Still well worth it though.

Well, you convinced me. I need a dropper post!

It looks like the Turbo is offered in two diameter sizes (27.2 and 30.9) and for other seat tube diameters you need a shim. Based on your experience with the shim and a cracked seat tube, would you be nervous about running the Turbo with a shim on another bike?

Regarding the cable routing: I had an issue with a rental bike running the Specialized Command dropper post. Basically the cable routing was stretched a little too much (probably because I ride a big bike) which pulled the cable and dropped my post every time I hit a bump. I guess the good news is the cable + housing is easy to replace and to customize to fit your rig.

I wasn’t very familiar with Gravity Dropper before your post and it’s interesting to see how it stacks up against the more familiar (to me anyway) Joplin. Pricewise they’re close but the Gravity Dropper is lighter weight (I didn’t see the hydraulic Joplin listed on CrankBrothers’ website). Unlike the Gravity Dropper, the Joplin is offered in a 31.6mm version (but no 27.2).

Thomson is working on a dropper post. It will rule…whenever it comes out, likely in a few years.

As far as running a shim, I haves used the exact same post with the exact same shim on my airborne goblin for months–many times the amount of time I used it on the jamis–and I have had zero issues with it on that bike, and I am still running it on there.

@Dustin Gaddis But that Thompson name means it will be heavy!!

I have the older Gravity Dropper model and a KS 950i. I have switched the GD around from bike to bike using a shim and it worked great.

The Gravity Dropper works great but I don’t really like the either up or down position. I like the infinite option of the KS. I love my KS it doesn’t have the usual complaints that the other hydraulic seat posts. They may cost a bit more but as usual with mountain bike products you get what you pay for and not to mention the great customer service of KS’s US representatives.

WANT! Dropper in general, This one maybe. Of course this is the kind of thing that requires a pile of saved up nickles and dimes. 🙂

A dropper post is one of my next upgrades, probably some time next spring. Like Bubblehead said, it takes quite a few nickels and dimes.

Yeah it does… Especially compared to the free seat post that comes with every bike.

Hans Rey stated that the dropper seat post was the most significant advancement in mtb technology in the past decade.

I tried one on my now retired SC BlurLT, almost 2 years ago. Fast forward to today….I’ve got Rockshox Reverb’s on all three of my rides: An intense SS, a Heckler, and my Tallboy. Are the posts expensive?….yes. Does it make riding more fun?…Hell Yeah!

For anyone who rides a quality 4-6 inch travel bike, this is THE upgrade you should make. You wont ever want to go back.

aw man, you had me untill i saw the price!

i purchased one a few years ago and it died on me- wouldn’t go up-after a short season. replaced it with one with a longer drop and it, after only a few rides, died. had it rebuilt and i’m waiting to see if it dies..if it does, i’m trying another brand because it’s really worth the price

I’m always stopping on the trails here in Colorado to lower/raise my seat. A seat dropper is on my wishlist and this review was thorough and informative and a great resource. mtbgreg1 is to be commended for his review!