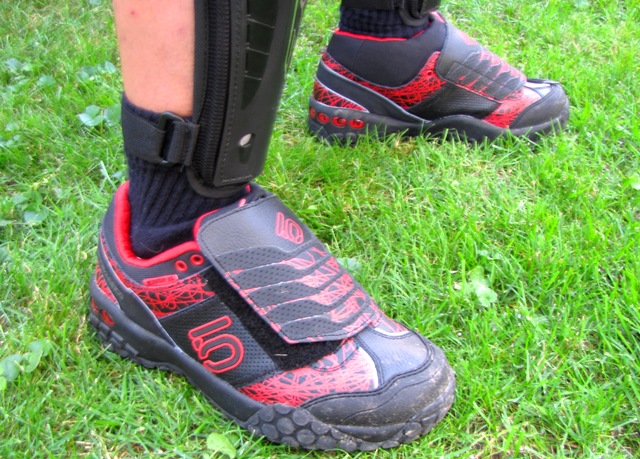 I’m just gonna come out and say it: Five Ten shoes are to the gravity rider like cleats are to XC racers. If you ask almost any rider on the slopes what shoes they wear (or want to wear) they will tell you Five Tens.

Five Ten didn’t actually start off in the bike market – in fact they started off way back in 1986, producing high-friction footwear for climbing. Charles Cole, the company’s founder, came up with a grippy rubber compound that produced high friction yet held up for climb after climb. To make a long story short, the company rolled out Steath rubber outsoles to all their shoes and eventually found their way into the freeride/DH scene. For the MTB market, the Five Ten line of shoes represents a tough, durable set of kicks with crazy good traction on the pedals.

The Five Ten Karver shoe is built for the really rough stuff that you encounter on the trail – bumps, logs, and of course jumps. Compared to other flat shoes I own I have to say I feel the safest in these. For starters the toe box on the Karvers feel secure with zero flex. I’ve pinched my foot between a rock and the pedal more than once so I really love the added protection I get with the Karvers. Speaking of pedaling I also appreciate the amount of power I can transfer via the fairly stiff sole. I even found I could get a bit of a pull up on the pedals thanks to the super grippy outsole.

The Karvers shine brightest on the drops and jumps. The shoes feel fantastic, keeping my feet on the pedals all the time. Even on the rough terrain like rock gardens where a foot can get tossed off the bike, the level of grip on these shoes helps me grab control of the pedal that much quicker. The Karvers feature just the right amount of padding to keep my foot secure and comfortable through the full range of motion.

The two best features of the Karvers have to be the flap that covers the shoe laces and the support cup around the ankle. I just love the feel of having my ankle held in place and my feet doubly covered to prevent unfortunate incidents with trees and rocks. The Karver can be had for about $115 and you can get them either online at Five Ten or at your favorite retailer.

I would like to thank the folks at FiveTen for providing the Karvers for review. Hopefully I’ll get you a few more reviews in the near future with the new Cyclone and Maltese Falcon shoes from Interbike. Check out the Five Ten website for more rad MTB shoes.

Anyone know of a retailer for Five Ten’s in the Tampa or Orlando, FL area? I have been looking, but have had no luck. Don’t want to do the mail order thing on shoes.