What does it take to adequately review a bike? Some people think a quick leg-over-the-top and a spin around a parking lot is enough to get a feel for a bike. Others take it out for a short spin on the singletrack, logging five miles or so, and then they think they know a bike.

Other publications might have a bike sent to them and ride it a couple times, shoot a couple of photos, and call it good.

But let’s be honest: even a hundred miles of riding isn’t enough to say that you’re intimately acquainted with a steed, that it feels like an extension of your being and that you are comfortable aboard it and know exactly how it handles and what to expect out of it.

I can say, without any reservation or any doubt in my mind, that I know the Trek Superfly 100 AL Pro. 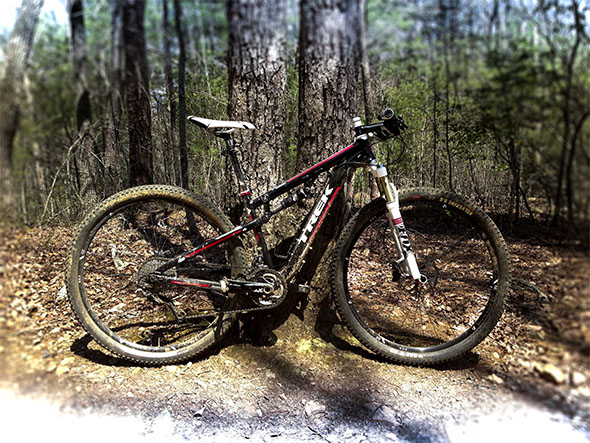 My spring riding season marked a personal fling with ultra-endurance cross-country mountain biking. Consequently, I have been riding a lot of miles this year, and so far the majority of my mountain bike miles have been on the Superfly.

Over the course of testing, I flogged this bike with 500 miles of grueling dirt punishment. Of those 500 miles, 100 miles were ridden in a dirty century, 60 miles were ridden during the destructive wet, muddy conditions of the Cohutta 100, and the rest were notched on long training rides and short pleasure jaunts alike.

To help me really understand this bike and to make sure the bike performed to its maximum capabilities during the dirty century, I also had it professionally fitted by Eddie O’Dea of 55nine Performance.

To help you get to know the Superfly a little bit better before I dive into the guts of my review, be sure to check out the “On Review” article which contains all of the bike’s specs.

Trek’s claim that the Superfly 100 is “the ultimate 29er full-suspension race bike” is right on the money. The Superfly is all about sheer speed: weighing in at 26 pounds stock (without pedals), this is one lightweight full-suspension 29er. Bearing in mind this is one of the aluminum versions and there are three more models above this including a full-blown XTR carbon dream bike, this is a no-holds-barred, competition-slaughtering machine.

Still, let’s be honest: only a fraction of us will actually be able to “slaughter” the competition. For the rest of us, we just have to settle for beating our friends every now and then and bettering our own times.

Even if all you want to do is up your personal records, the Superfly 100 AL Pro is the perfect bike for that, too. I’ve set countless PRs on everything from climbs to pedally, undulating descents to full-circuits while riding this bike.

The efficiency of this bike is incredible. Despite being a full suspension rig, I felt like my power transfer to the wheels was impecable. Thanks to the Fox CTD suspension, you can adjust the fork and shock stiffness on the fly with the three Climb, Trail, and Descend settings.

During my XC rides, I found myself running the shock on full open almost all the time I was on singletrack, thanks to the Superfly’s firm pedaling platform. I ran the shock on the trail setting almost all the time I was on fireroads to give it a little more firmness but to also provide a little forgiveness when things got chunky; I almost never used the fully-locked climb setting. Perhaps the only time I found myself using “Climb” was once or twice on pavement, or very long, very smooth gravel road climbs.

As for the fork, I didn’t see much use for the trail setting since this is only a 100mm fork, and opted to run it full-open the majority of the time. I did run it fully locked on many gravel road climbs, especially when I was out of the saddle hammering.

For my dirty century and other long, arduous dirt rides, the rear suspension really saved my body. I’ve done a few 60ish mile rides on hardtails before, and the pummeling on your body, not to mention the extra effort required to descend gnarly trails, takes its toll after hours on end. I greatly appreciated the full suspension setup for my dirty century, and doubt I’d ever attempt one on a hardtail.

There’s a group of people who might look at the Superfly 100’s specs and be interested in this bike simply as an everyday performance trail bike. With 29in wheels and 100 millimeters of suspension front and back, the Superfly 100 is capable of tackling some serious terrain. While I would personally feel comfortable piloting this rig down technical, big mountain trails, the Superfly just isn’t intended to be confidence-inspiring in that application.

For one, the travel on the rear shock just isn’t enough for true gravity riding. It’s great for XC and ultra-endurance riding, but will bottom out pretty quickly even on small drops and jumps and is overwhelmed quickly in technical rock gardens.

Finally, the geometry isn’t designed to be inspire confidence in all-around applications. The 71-degree head tube angle and 73.6-degree seat tube angle feel great on undulating trails and when climbing, but when descending at speed the bike feels twitchy. I was still able to rip most descents during Cohutta and during my dirty century, but I wouldn’t want to put a bike with these angles on much burlier terrain.

Still, if climbing is your thing, or you don’t have too many drops or rock gardens on your local trails, or your idea of a “descent” doesn’t entail at least 1,000 vertical feet of downhill, the Superfly might be just the ticket. If you do want something that’s more descent-oriented, don’t fret: Trek has plenty of bikes in their lineup to choose from.

Components: After the Fact

Despite thrashing the Shimano XT drivetrain in mile after mile of wet, muddy conditions, I had no major issues with the performance. XT is simply a bomber, reliable drivetrain. The XT brakes also performed superbly, and while I’m sure the pads took a hit during all the muddy riding, I still haven’t had to replace them.

The Fox fork did start exhibiting some stiction after Cohutta. It’s nothing too drastic, but it’s noticeable. Standard maintenance (seal job) would probably clear it up and make it right as rain.

In the “On Review” article, I mentioned that I put a serious wobble in the rear wheel during my first ride, albeit a 63-mile singletrack fiesta. I consulted bike mechanic and wheel builder extraordinaire, Zachary Rider of Northstar Bicycles, to get a second opinion from someone who’s more knowledgeable about wheels. According to Rider, “with straight-pull spokes, most of the time they require second tensioning and truing after about 100 miles.” Also, it sounds like this retensioning requirement is true across the board with straight-pull spokes, no matter the level of the wheelset.

My wheels loosened up well before that 100-mile mark, so it’s a good idea to keep an eye on them and then take them in (or do it yourself) before you warp the wheel permanently. I rode a loosened wheel for about 300 miles before getting it looked at, and consequently put a big flat spot in the wheel. Most of the blame for that damage lies with me. Despite being warped, I went on to put another 200 miles on that wheel after Zach trued it up as best he could. Despite that same wobble and flat spot, I still haven’t broken a spoke or had any major issues.

Lastly, in the previous article I mentioned that I swapped out the front Bontrager tire to a burlier WTB Wolverine, but I left the other Bontrager on the back. Well, after my dirty century but right before my Urban Assault race in Richmond, VA I was riding around warming up before the race and heard my tire pop and all the air rushed out. I checked and realized one of the sidewalls had worn through, with less than 500 miles on the tire. I executed a quick trailside repair with a $1 bill and was able to race it, but the sidewall tear is disappointing.

Sidewall tears are a real pet pieve of mine: I like to wear out my tire tread and choose when to replace my tires instead of having to replace them out of necessity, and risk getting stranded in the wilderness due to a sidewall blow out. If you purchase a Superfly, I highly recommend a tire upgrade.

If the worst thing I can complain about is a blown sidewall on a tire, you know this is a good bike! Just don’t have any illusions: the Superfly is all XC, all the time. It can pull occasional duty as an aggressive trail bike and an adventure machine, but the Superfly 100 is bred for pure-frigging-speed and is meant for rolling on race courses.

And chances are, if you take the Superfly to the race course, you just might find yourself crossing the finish line faster than you expected!

Many thanks to Trek for providing the Superfly 100 AL Pro for review.

Awesome review. It’s great that you got the extended trial and how often do reviewers go as far as a full pro fitting? It may not be my next bike but it all helps me zero in on whats good.

I think I gotta have those Shimmonoe brakes. Mine get return calls from turkeys.

Yeah, it was a very immersive review experience–and I loved it!

Re: Shimano brakes: I’ve been digging the XTs! They’re on my latest review bike (Diamondback Sortie 29er) as well, and I’m seriously considering a pair of these for my personal rig!

Great review Greg. I have a 2012 Trek Rumblefish and love it. I’m sure this SuperFly is an awesome bike for XC. I see that one of your pics is from Chicopee in GA. I miss that trail. I’ll never forget the crazy gravel climb at the end after the creek crossing. I now live in Florida, so I really miss those Atlanta area trails…especially Blankets Creek. Keep up the good work on the articles.

Thanks Rick! Yeah, Chicopee is always a great ride, but I generally prefer to stay up in the North GA mtns 🙂

I’m feeling like getting back down that way again soon, though.

Great review! I’m on my second Superfly (AL versions) and I absolutely LOVE these bikes. They are ready to roll out of the box and really don’t need upgrading besides new tires after you wear out the original one’s and going tubeless. The XT components are simply the best bang for your buck. The XT brakes are superior to ALL the other companies out there. They are as quiet as a church mouse. I have the 2012, but next year I will be upgrading to the carbon version w? XT components. That version wasn’t available in 2012.