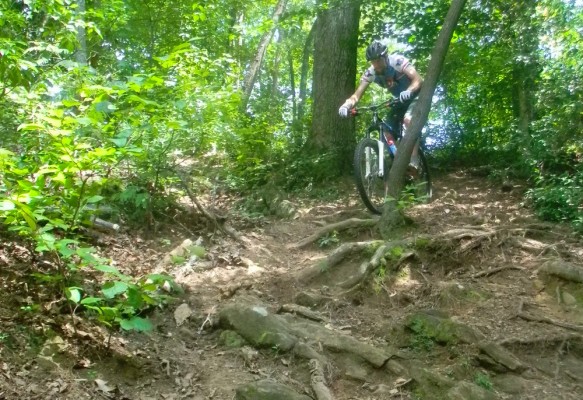 In my last installment, I introduced you to the Blue Pig – Ragley Bikes’ most aggressive steel hardtail.

So now that I’d built the frame all up and rode it up and down my street in the dark (noting the brake drag that would surely work itself out), what would a guy do next? Drive four hours after work, set up camp in the dark, and go race 30 or so miles up in Pisgah the next day, of course. The Pisgah Enduro had to be the perfect test for this little piggy.

Ragley Blue Pig, Out on the Trail

I was fully equipped with all the essentials for a full day of riding some of the best trails in the southeastern U.S. Two helmets – check, knee pads – check, just a tad bit of lycra – check, hardtail ready for it all – check. That’s how they do it in Europe, right?

The bus and trailers dropped us off a fair distance up the hill at Ridgecrest; the rest would be up to me. The climb was steep and paved for the first stretch. The bike did its duty, while not quite letting me forget that I was riding a 6+ pound frame with a burly build bolted on. Once we got to the really steep bits of trail, however, that front end, with its 66.5° head tube and 45mm stem, started wandering around like an over-medicated nonagenarian in a souped-up Jazzy. I tried flipping the ETA on my fork, but the travel adjustment worked only when it was damn good and ready. With that option out, I resorted to standing up. The wandering was well sedated, and I continued the grunt up the first hill.

On the rock-strewn first descent of Rattlesnake Ridge (my first on the bike, mind you), I noticed something was definitely off. The ass-pounding that I was normally accustomed to on my Aluminum hardtail was missing. Those svelte, curvy stays were actually doing something. Smaller obstacles were painlessly chewed up and spit out the back. However, the long wheelbase (45 3/8in. on my 20in. frame) combined with the heft of the frame and whole bike in general made bunny-hopping over larger objects a bit of a wrestling match, despite the relatively short 16.5in. chainstays. The bike’s long wheelbase and slack headtube did keep things real stable in the fast and loose sections. High speed corners were taken with authority, while low speed corners were just that; I wouldn’t call her nimble.

Up the hill we rode, down we came, again and again. The race finished, I’d check results as they were updated periodically, and get back to drinking, but this isn’t about me. The bike yearned for more – I could see the potential. I came to Pisgah for gnar, and yet the trails ridden that day were some of the tamest the forest had to offer. 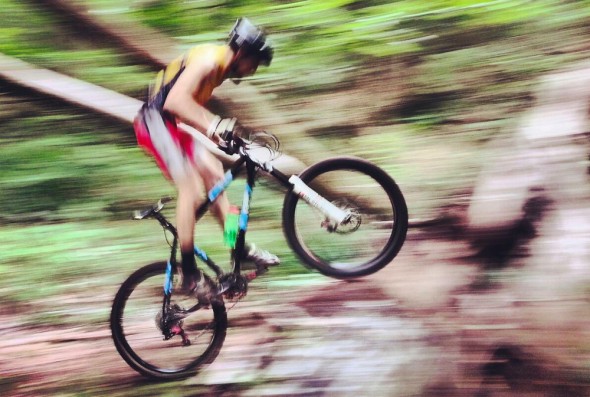 Back at home, I took the bike to a popular IMBA-approved trail (i.e., gentle, wide, and flowy) for a go. The bike was fun and the bike popped off the small table tops along the trail, but there was still something missing. 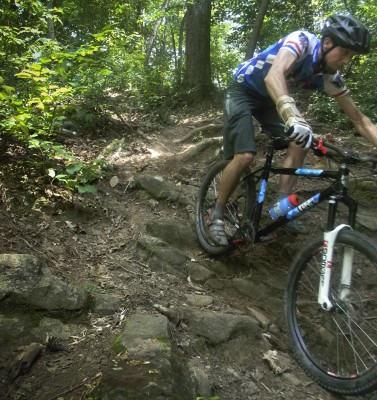 My local underground trails proved to be the perfect testing ground for this piggy. Here I could point the Blue Pig down–way down–over rocky outcrops and through narrow chutes,off drops and over roots, all the while squealing with delight. On my own backyard trails with some flats installed, catching air was comfortable and fun. If not entirely whippable on the jumps, the Pig could rail berms so hard I thought I’d rip the bead off the rim. This bike needed to be ridden hard and fast. 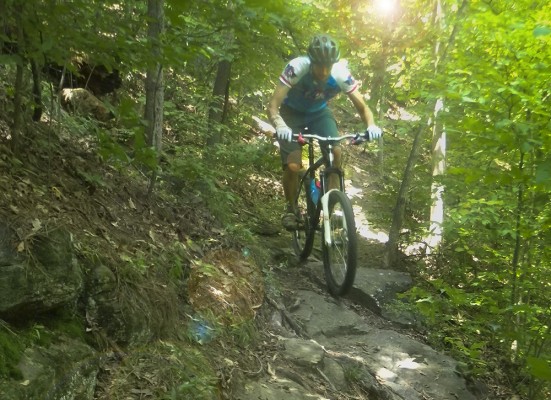 If I had another go at it, I’d choose the 18in. frame (tested: 20in.), which should make the bike a little more nimble in the air. I’d also mount up a slightly longer stem, maybe a 60mm, to get a bit more weight over the front end to even out the wandering climbs.

The Blue Pig may not be the bike for everyone. It’s heavy, somewhat sluggish, and still has those pesky 26in. wheels everyone seems to keep complaining about. It’s not a dirt jumper either; it’s plenty beefy, but those stays probably couldn’t take that kind of abuse.

The bike loves descending: the steeper and faster, the better, and those same slender stays will definitely save your ass on all-day, big-mountain rides. If you’re looking for an affordable, berm-burning, hard-charging, enduro-racing, absolutely beautiful, all-mountain rig, this pig just might be the one!

Many thanks to Ragley for providing the Blue Pig for review!

ericnico
ericnico is an author and Singletracks contributor. Not much is known about ericnico, though the legend grows each day.

I know this is super old, but amy way we could find out the author’s height?

Eric is tall-ish. About 6′ I would estimate.