At a time when the only fat bikes in the world were some one-off custom models and the fairly-heavy, steel-framed Surly Pugsley, Greg Matyas at Speedway Cycles in Anchorage, Alaska was inspired to create a fat bike with the terrain-conquering characteristics of the Pugsley, but in a package that rides and handles like a regular bike. The bike also needed the ability to run 29er wheels in the summer, and the frame needed to weigh 4 lbs or less.

The Fatback bike was born, and quickly went from hand-drawn sketch to welded reality, making it the first production fat bike to hit the general market after the Pugsley.

If you squint a little and ignore the enormous tires, the Fatback looks like a typical hardtail trail bike. The alloy frame features a tapered headtube and a dropped top tube for optimal standover height, and there are plenty of mounting options for racks and frame packs. It also has, count ’em, three bottle cage mounts. With the exception of the fork, hubs, and crankset, all of the components are straight off the shelf, allowing the endless upgrading and customization that we all love to indulge in. 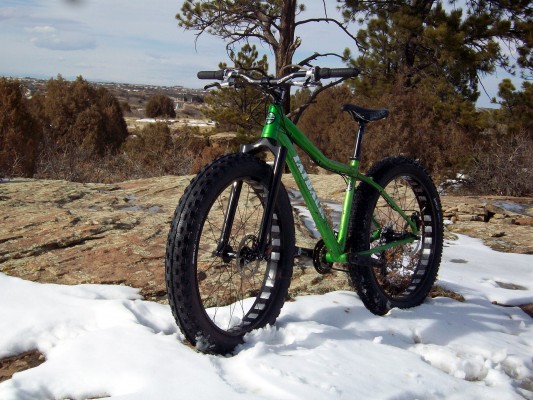 All Fatback frames are designed, welded and assembled right here in the US of A .. a rarity these days.

My test bike is the “Deluxe” build, which includes Avid BB7 mechanical disc brakes with 160mm rotors front and back, a SRAM X9 drivetrain with the large chainring replaced by a bashguard, grip shifters, FSA alloy cockpit parts, and a WTB Pure V saddle. Fatback rims, imported hubs, and an FSA crankset round out the build kit. Stepping up to the “SL” model gets you Hadley/Fatback hubs, an X0 drivetrain, and Ritchey carbon cockpit stuff, as well as Avid Elixir 7 hydraulic disc brakes. Both build levels are available with Fatback’s own rigid carbon fork, and tires can be mixed ‘n’ matched with models from Surly and 45NRTH. 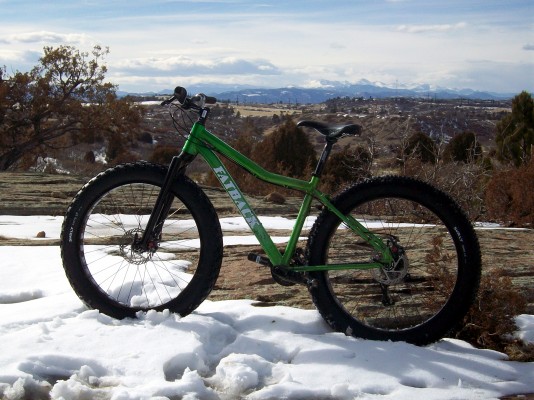 The Deluxe build tips the scales right at 30 pounds, with pedals, while the SL weighs in a couple pounds lighter. That’s right: an alloy fat bike with 4in tires for 30lbs or less…

Relative to their nominal lengths, the effective top tube is a bit long and the seat tube is a bit short. For me personally, this makes for an awesome fit, as I have short legs and a fairly long torso. In general, this also maintains a fairly upright sitting position like a trail bike, but also allows for good body extension for efficient pedaling. The longish top tube should be conducive to a short stem/wide handlebar setup, but I haven’t tried it yet. Other reviewers have commented negatively on the 18.1in chainstays, but I haven’t found the length to be an issue. In fact, this is one of the easiest mountain bikes to wheelie that I have ever ridden. 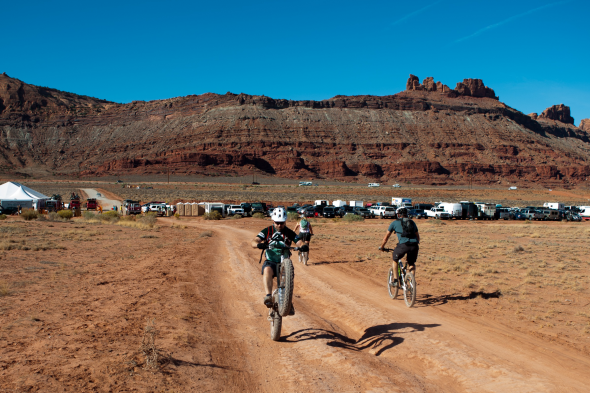 Overall, the Fatback geometry is more like a comfortable trail bike that happens to have fat tires, rather than a bike that was designed around the tires.

With Speedway Cycles being located in Alaska, and fat bikes exploding in popularity in the Lower 48, Greg and the guys quickly became adept at shipping partially-assembled bikes via mail order. Mine arrived with the front wheel removed, the handlebar detached and packed neatly to the side, and the fork turned backwards, allowing for the smallest possible box. Final assembly took about 15 minutes, and the brakes and shifting were already perfectly adjusted and indexed.

I would normally discuss “out on the trail,” but the Fatback has become my go-to bike for all sorts of rides. Going to the store, spinning around the neighborhood with the kids, after work XC jaunts, and even some signature Denver Front Range rides of a dozen miles or more are all fair game on the fatty.

True to its design, the Fatback excels in snow, sand, and soft dirt. The uber-wide tires distribute weight over a huge contact patch and leave a minimal footprint while providing crazy amounts of traction. This traction, combined with the ultimate power transfer of the fully rigid design, actually makes it easier to get up and over some obstacles as compared to my full suspension 29er. Yeah, that surprised me too.

Trail riding is surprisingly similar to any other hardtail bike. You can definitely feel the rotational mass of the big tires, but in terms of geometry and pedaling efficiency, it’s just a great riding, comfortable bike. Despite being a fully-rigid frame and fork, running the fat tires at 5psi or so provides enough squish to tame minor trail chatter, and the carbon fork also helps in this department. Overall, the Fatback rides better than most front-suspension hardtails I have ridden.

One quirk I noticed, though, is high speed maneuverability. Get the big knobbies churning at 20 MPH or better, and the gyroscopic effect of all that rubber is, um, interesting. Basically, if you catch some air and the front wheel is turned, the whole bike wants to follow. A little practice helps mitigate the effect, but it’s definitely a thing.

Climbing on fat tires isn’t as bad as I expected, but the cumulative effect on long, sustained climbs can be brutal (think Mt. Falcon in Denver.) After a few rides on the Fatback, going back to my XC 29er is an incredible feeling!

The Fatback is also a very durable machine. In my months of testing over all sorts of terrain, I have had zero issues. Braking and shifting are as crisp as they were on day one, the wheels are true, and the frame and bolted items are still nice and tight.

There is no question that fat bikes are enormously popular right now. As one of the pioneers of this movement, Fatback is still an innovator in the genre and should be on your shortlist if you’re in the market for a fatty. More specifically, while this bike is a clear choice for snowy or sandy environments, it is also a great all-around player that can handle literally anything you can hang on for. I’m not necessarily suggesting that you make a fat bike your only bike, but if you do… this is the one to do it with.

On a personal note, this bike, like no other test model before, has become a part of the family. My daughter is always bugging me to let her ride it, and even my wife has given it a spin. Every group ride I take it on, people are quick to ask for a turn, and the end result is always a smile. I have even been stopped by some BMX kids on the local bike path so they could take pics of my “totally rad, fat BMX.” There’s just something so iconic and real about the Fatback that makes it “that bike…” the one you always grab when you just want to go for a ride. 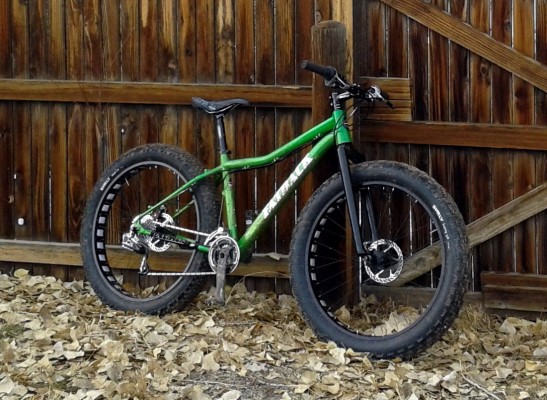 For $2,500 MSRP you can put the Deluxe model under your butt, or for $850 you can snag a bare alloy frame and build it up any way you like. Either way is a solid deal on a great bike!

Thanks to the guys at Speedway Cycles for sending the Fatback Deluxe over for review!

Great write up! I got on the 4.8″ version at Outerbike and was super impressed with everything from the ride quality to the component spec: all in all a fantastic job by Fatback Bikes!

Also, check out a spin-off from Fatbikes in Colorado Springs: http://www.borealisbikes.com A bit more upscale, but some very cool bikes, including the ability to go with 4.8″ tires. Wow!

What do you mean by ‘spin-off’?

Also, I rode a Borealis at Outerbike. The carbon is definitely nice and light, but they have a ways to go on getting the geometry dialed.

Also, as per mtbgreg1’s comment, Fatback also offers 4.8″ tires. In talking with them at Outerbike though they all run 3.8″ or 4.25″ back in Alaska .. the 4.8″ offering is just to keep up with market trends.

A “spin-off” in that the Borealis designer worked for Fatbike. So, not endorsed by Fatbike, but from the same shop in Anchorage.

I’m unclear who ‘Fatbike’ is and how they relate to ‘Fatback’.

And ‘not endorsed’ is putting it mildly. 😀

Anyway, it’s beyond the scope of this article. Let’s leave it at; I rode both, but I’m buying the Fatback with my own dollars. (We typically don’t get to keep review bikes)

Also, stay tuned for the all carbon Fatback starting around Christmas. You can pre-order that frame right now on their website.

Sorry, fingers should have typed “Fatback” not “Fatbike”.

Yeah, I bet Fatback would rather not have these guys in Colorado nudging into their niche, but I bet the folks at Surly would say the same about Fatback. In any case, with all the attention this segment is getting there soon may be some great fat-tire bikes available at prices that aren’t too hard to choke down.

I just got to try a Borealis Yampa–their full carbon frame fatbike and it was nothing short of amazing. 28lbs was pretty sweet for such a rig and the ride was superb. If you’re willing to spend the coin, they can get it down to 25lbs–less than my first 26″ HT race bike!

But can they make your heels not rub on the chainstays and the seatstays not dig into your calves when pedaling out of the saddle? 😉

Corey, I think you need to bust out a review of the Borealis!

Also, stay tuned for my (shorter) review of the 4.8″ Fatback from Outerbike tomorrow.

Ha! I don’t think Fatback would call it a spinoff…