Winter is a great time for building new trails and maintaining old ones. With all the leaves off the trees, it’s easier to see the terrain and decide on the best route for the trail to take. If it’s too cold/wet/snowy/muddy to ride, but you still want to get out into the woods, a little trail maintenance is a great way to get some fresh air while giving back to your local trail system.

On work days over this past fall and winter I’ve been carrying two tools from the Japanese brand Silky: their ONO Chopper and Pocketboy 170 folding saw.

The ONO Chopper ($149) gets its name from the words you’ll say if your hand or another body part got in the way of this blade: “Oh no!” I don’t know if that’s true, but it sure sounds cool. At nearly 6mm thick and weighing in at 1.75lbs, the ONO is one serious slab of metal. The handle is made of a cushy rubber that makes the ONO comfortable to wield even barehanded. Should you — or more likely, your great-grandchildren — wear out the blade on the ONO, replacements are available for $90. Peel the rubber handle apart into two pieces and rejoin them on the new blade. Super simple.

Overall, the ONO measures about 13″ long with a 5″ blade, and comes with a carrying case for mounting to a belt. The ONO would be a little cumbersome to take with you on everyday rides, but for workdays — and camping trips — I found it indispensable. I made a small paracord loop as a wrist sling for a little extra security on mine. It’s perfect for clearing small brush while walking a new trail and for chopping small logs to burn. The ONO will punch above its weight on bigger logs if you use a thick stick to hammer its backside, to help drive it through. 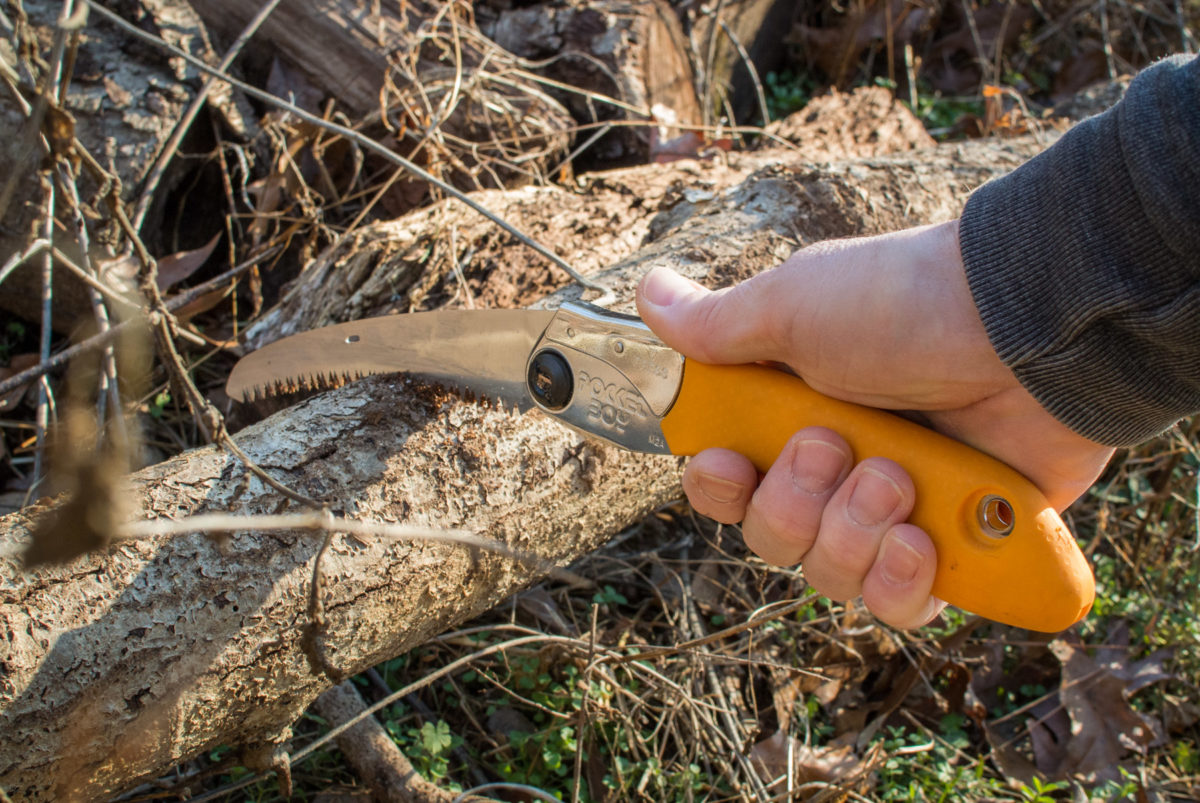 While the ONO only came along with me on work days, the Pocketboy 170 ($52) folding saw now lives in my pack. At around 1/2 a pound including the carrying case, there’s no reason not to bring it, especially on backcountry rides. Like the ONO, the Pocketboy has a comfy rubber handle. The 170mm (6.75″) blade folds out into one of two positions. In the first position, the Pocketboy is basically straight–great for most uses. The second position gives the saw a little bit of a kink, which I found helpful for cutting stuff low to the ground.

Silky shipped this Pocketboy with their fine, 17 tpi (teeth per inch) blade — good for cutting hard woods, but it makes quick work of green branches too. If you have the patience — and the stamina — the Pocketboy will get through some surprisingly-large logs. I regularly sliced through logs 5″ in diameter… with a rest break.

The Pocketboy comes with a plastic case, which is a nice touch to keep the saw rust free and safe, but there’s room for improvement. For one, the saw only fits in the case one way, which is a bit annoying. Second, there’s kinda sorta a bet clip but not really. In reality it’s just a square loop of metal that doesn’t mount anywhere particularly well. I’d rather see a legit belt clip or none at all. The one use I found for the clip was to loop one of my pack’s straps through it. That way, I could put the Pocketboy in my exterior stash pocket without worrying about it bouncing out.

If you like bikes, there’s probably a good chance you like tools, too. My quibbles with the plastic case aside, both the Pocketboy folding saw and ONO Chopper are damn fine tools. The ONO is a bit use-specific and expensive, but it’s a fun piece that’s sure to last a lifetime. On the other hand, the Pocketboy should be in everyone’s pack, especially if you’re riding in the backcountry.

Thanks to Silky for sending the ONO and Pocketboy for review.

I love a good pocket saw. You can cut through surprisingly large limbs with one, and they’re easy to throw in a pack. The ONO definitely appears to be the Cadillac of folding saws.

Aaron, can the blade on the pocket saw be replaced? And please give us a long term update on how well the saw blade holds up. I have regularly carried a less expensive pocket saw in my bike bag for quite some time since I’m always riding with a bag anyway. They just seem to rip through pretty much anything. I also carry some small snips on many rides to keep back the smaller brush. Between a pocket saw and snips, one can get a lot work done on a ride with minimum time allotted. Oftentimes I’ll go out for a “trail maintenance” run on a trail that I know needs maintenance … with the snips and saw in hand. I schedule like two hours, so I get some decent mileage for the run and get some trail work in wear it needs it.