When Cannondale announced the latest iteration of the Trigger, there were (for better or worse) a few things missing. Cannondale ditched the 29″ version, the Lefty got left behind, and the shock went from pulling to pushing. So many changes in one fell swoop calls for high expectations so I was stoked for a 3-month demo on Cannondale’s quiver-killing, do-all machine — the Trigger. 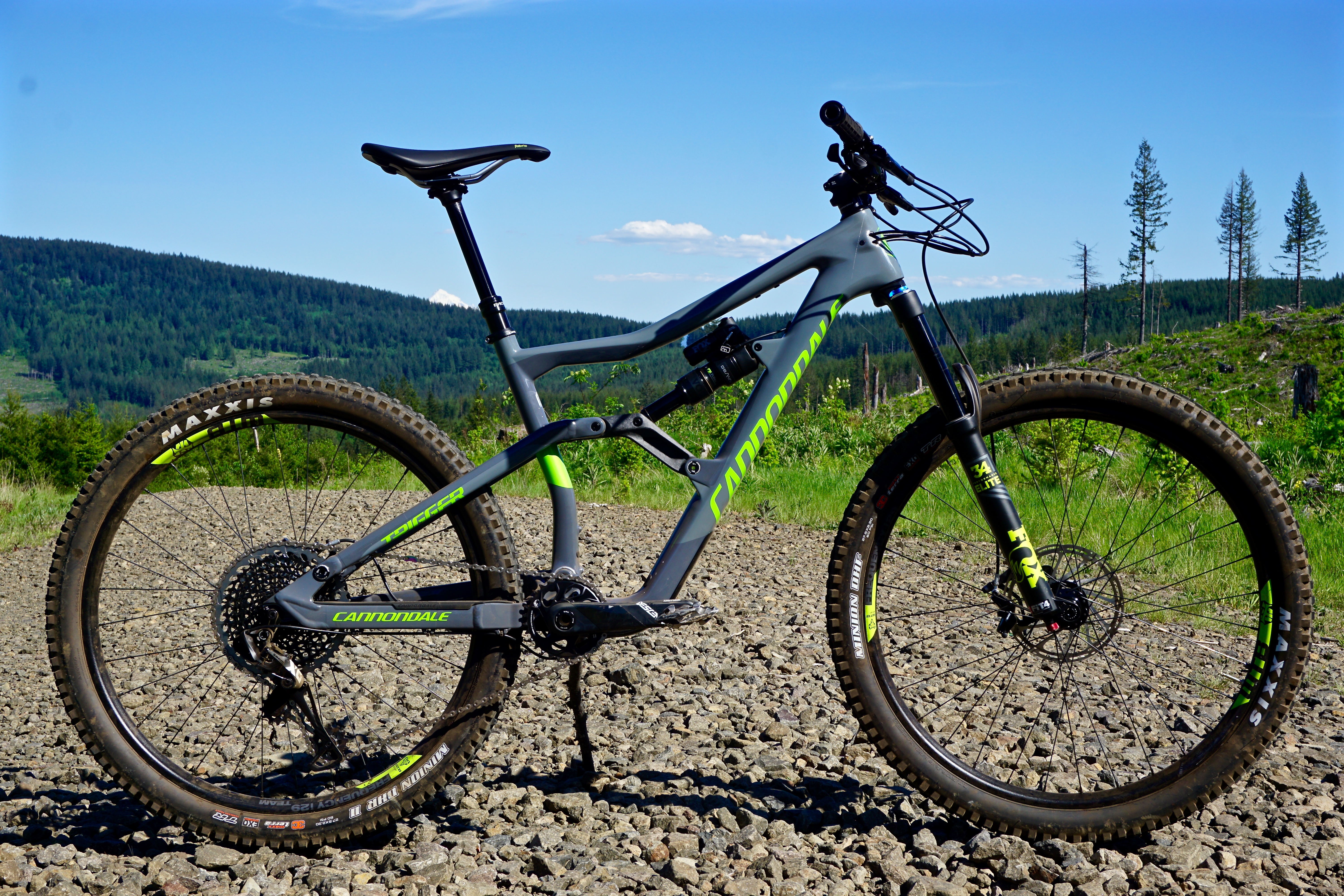 The Cannondale Trigger comes in four sizes (S-XL) and four builds, starting at $3,999. All builds feature Fox suspension, a 1x drivetrain, dropper seatpost, and 27.5″ wheels from WTB. The highest spec Trigger 1 is the only build with a full carbon frame while builds 2, 3, and Women’s 1 pair a carbon front triangle with an alloy rear. 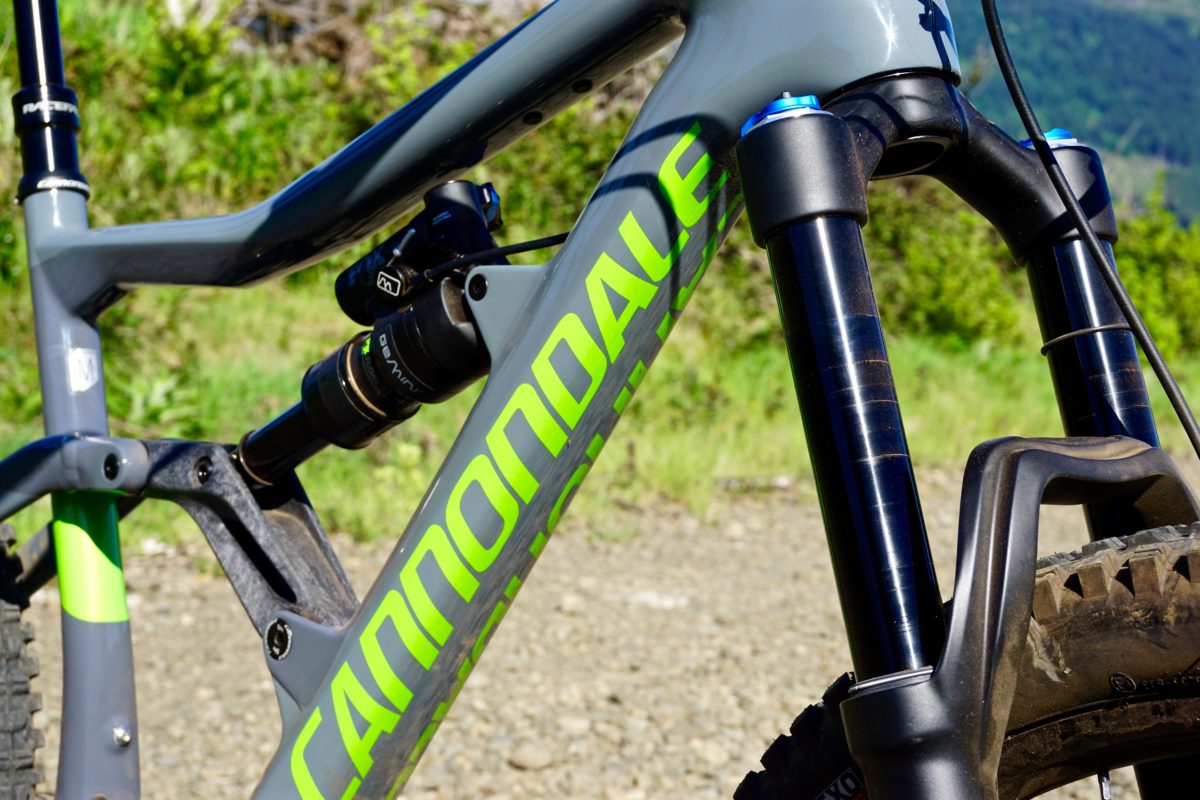 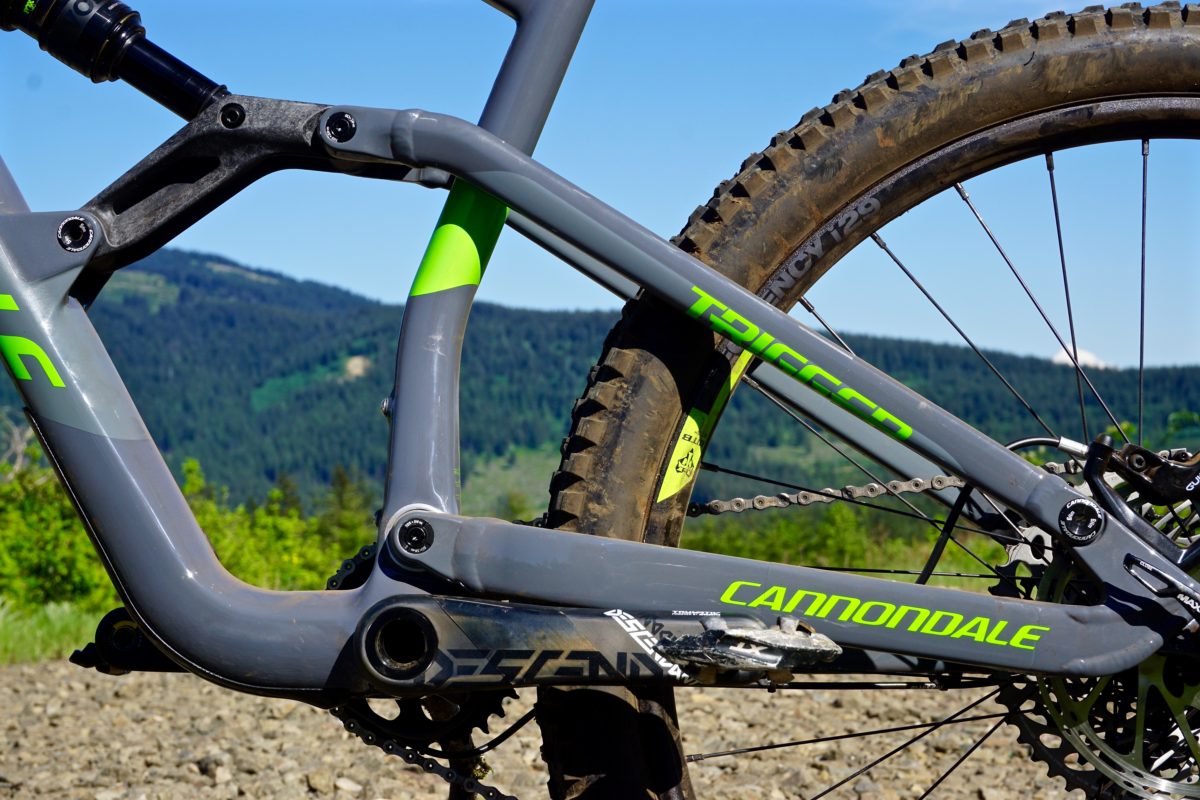 In marketing the Trigger as “ready for anything, do everything”, Cannondale tends to details important for versatility and durability. Internal cable routing allows for 1x, 2x, Di2, a stealth dropper, and cable for the Gemini shock. All Trigger models feature a carbon shock link with Cannondale’s “Lockr” thru axle pivots for added stiffness and ease of maintenance. A water bottle fits squarely between the bottom bracket and rocker link and a frame guard adorns the down tube.

Death to DYAD and Lefty Left Behind

The most notable changes Cannondale makes to the Trigger is in the suspension category. While the DYAD pull shock has been laid to rest, some of its likable features have been condensed in a less burly version Cannonade calls “Gemini.” Co-developed with Fox, the Gemini offers a remote-actuated, dual travel adjustment, which reduces shock volume by 20% (145mm to 115mm). The Fox X low speed compression, rebound, and DPS damper remain unaltered. At the lower volume (Hustle mode), the Gemini is more progressive (more responsive, playful, stiffer) while the larger volume (Flow mode) provides a linear, plush feel. Unlike the DYAD, you can swap the Gemini out for another aftermarket shock of the same size (210mm x 55mm).

Further balancing the equation is Cannondale’s choice to suspend the use of the Lefty Supermax for a Fox Float 34. The Trigger 2 comes with a Fox Performance Elite featuring the FIT 4 damper, 110mm Boost spacing, and a 44mm offset. 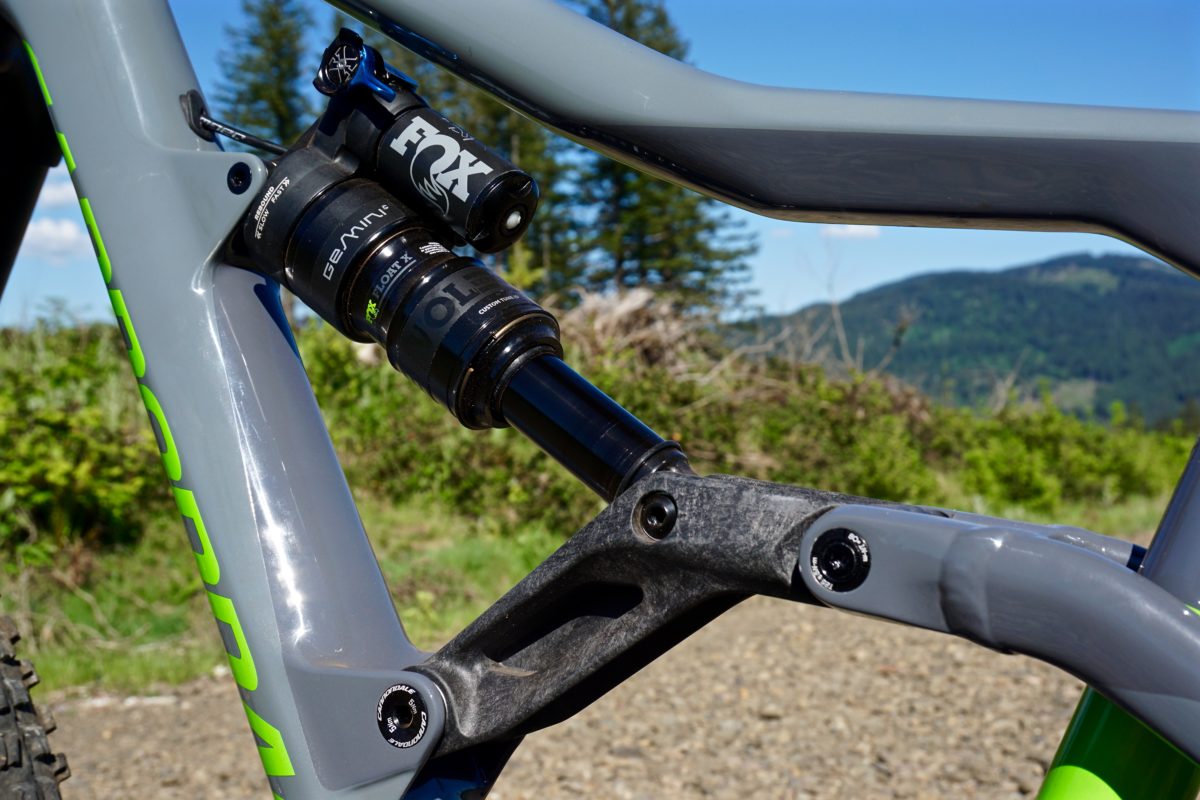 With such an aggressively-charged geometry, I initially thought I’d clicked on the Trigger’s bigger brother, Jekyll. The Trigger’s killer combo of a 66º head tube angle, 420mm chainstays, long reach values, and 74.5º seat tube angle had visions of uphill capability, downhill stability, and flick-ability dancing through my head.

Boost spacing is hardly worth mentioning anymore, but what many do not appreciate are the compromises some companies still make to achieve such short stays. In keeping true to their heritage of innovation, Cannondale has tweaked the rear swing arm-drivetrain interface in a system they call Asymmetric Integration (Ai). Moving the chainring, front derailleur, and chainstay 6mm (142 to 148mm) to the drive side allows for massive tire clearance without thinning the driveside stay or eliminating 2x compatibility. To achieve proper chainline, the rear cogs also move 6mm outboard. This now centers the rim directly between the hub flanges, requiring the re-dishing of a standard rear wheel. This results in even spoke angles and tension for a stiffer, stronger wheel. 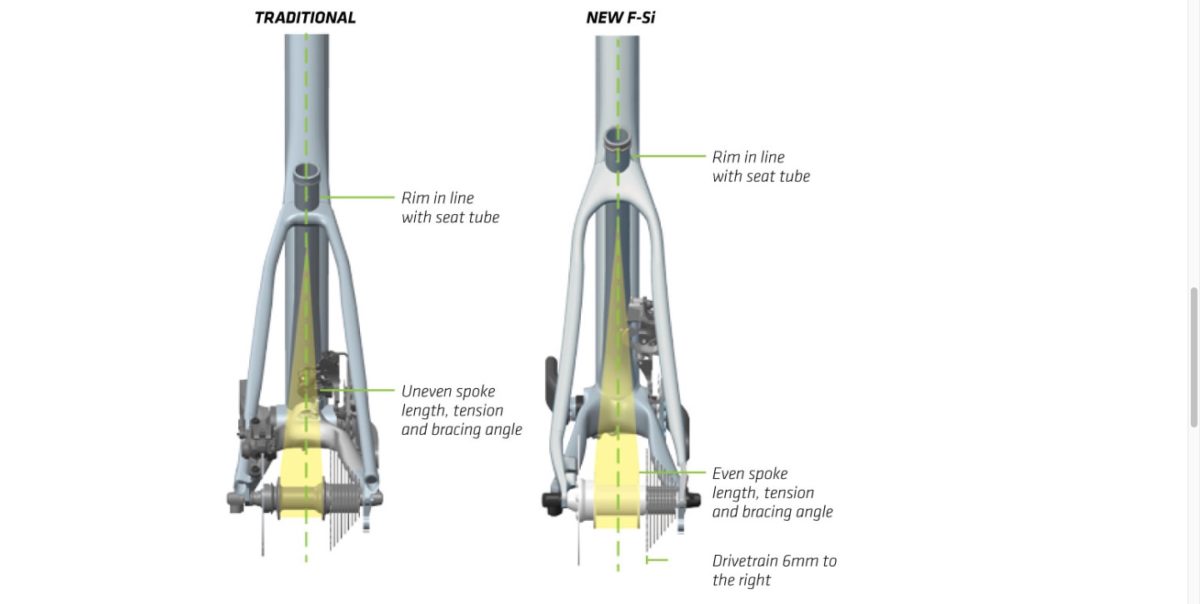 Like its hard-charging geo, the Trigger 2 is composed of a beautiful balance of components, with all-mountain durability and performance at the forefront.

Cockpit: A 45mm stem paired with a 780mm-wide carbon bar is a bold step in the right direction. In fact, this is the same Cannondale bar employed on the enduro-ready Jekyll! Only a 35mm clamp would best this beefy bar/stem combo, yet many are still perfectly happy with the smaller diameter. Rounding out the cockpit’s braap-ability is a Race Face Turbine dropper with 150mm of travel on sizes M-XL (125mm for small).

Drivetrain: Both the Trigger 1 and 2 enjoy the wider-range SRAM Eagle 12-speed drivetrain, while the Women’s and Trigger 3 get an 11-speed Shimano. Eagle shifting is light at the lever and smooth from top to bottom. Both the shifter and rear derailleur are X01 on the Trigger 2. As a reminder that the Trigger is not to be taken lightly, Cannondale specs the downhill-worthy Truvativ Descendant carbon crank. While I don’t consider the 345mm bottom bracket height super low, rock strikes came more frequent than I cared for with the 175mm crank length (size medium). 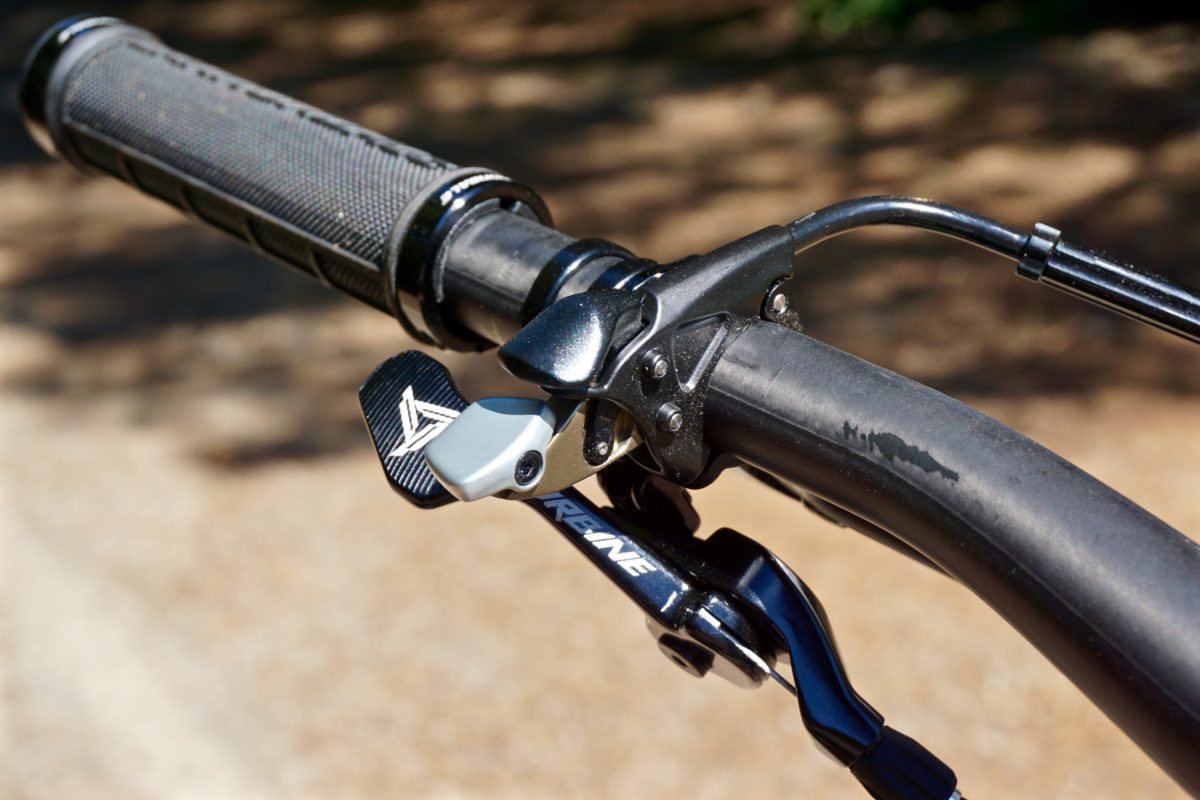 Brakes: SRAM Guide RS takes on brake duty and performed flawlessly under great duress. With such a smattering of beefy parts elsewhere, a 200mm front rotor seems more sensible than the current 180.

Wheels: Wilderness Trail Bikes (WTB) supplies their fan-favorite, 27.5″ Frequency i29 Team wheelset with a 29mm inner width. Triple-butted DT Swiss Competition spokes are laced to the new SRAM 900 hubs. I was excited about these particular hubs and was happy to find quick engagement (6.9º), versatility, and tool-free maintenance at an affordable price. Lastly, Maxxis Minion DHF front and rear might be overkill for some, but an “over-tired” bike is rarely a deal breaker.

There’s something about the number “145” — the amount of rear travel employed on the Trigger — and a Fox 34 fork that doesn’t exactly scream all-mountain (AM), yet seems a bit much for a lighter-duty trail bike. This travel choice with a great component spec would end up being what sets the Trigger apart from other AM bikes that tend to favor downhill more than up — in a word, balanced.

The benefits of the super short chainstays were immediately and consistently noticeable on the Trigger. I found gravel-spitting traction on the ups, enhanced agility on the downs, and nimbleness everywhere in between. With chainstays this tight, it was no longer about how fast I could zoom, but how often I could pop, flick, and kapow! Cannondale’s BallisTec carbon triangle also increases nimbleness and the ability to loft the front end with little effort. The Trigger’s geometry is definitely a move in the playful direction. 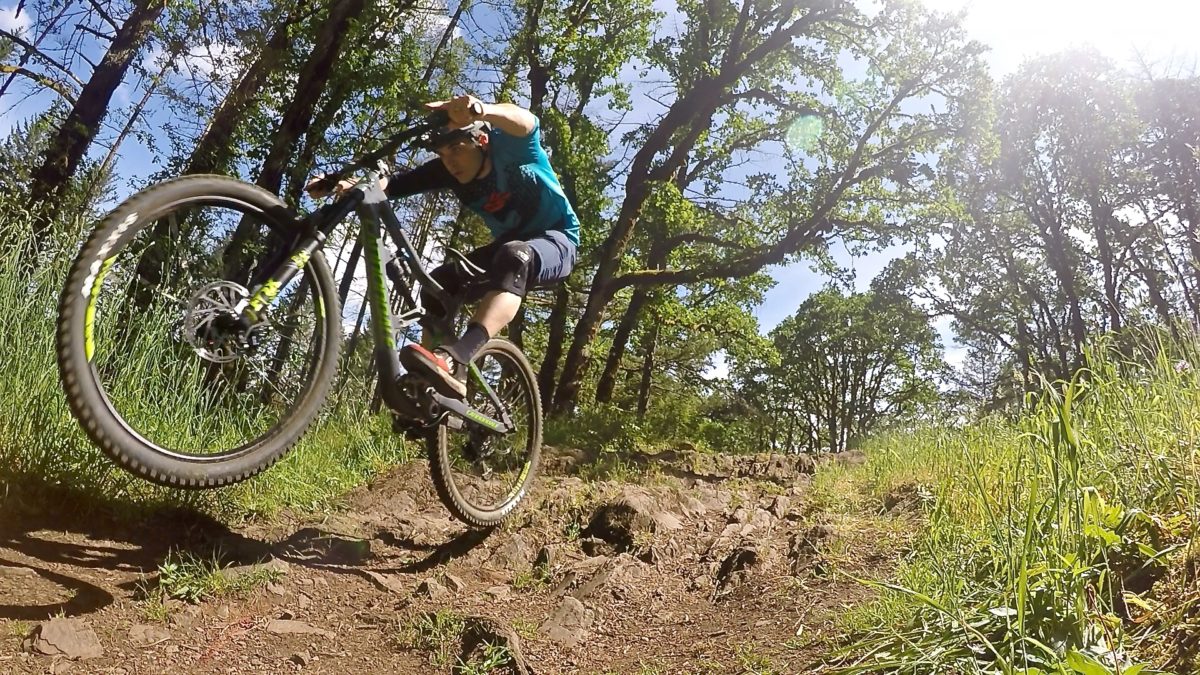 Bringing Balance to the Force

Increasing maneuverability is often a tradeoff for high speed stability — a compromise I found only slightly made on the Trigger. Riding Tiger Mountain’s Predator, SW Washington’s Thrillium, and Leavenworth’s Tres Hombres trails, it wasn’t difficult to find the limits of the Fox 34 and 145mm rear travel. That said, these are also trails capable of overwhelming bigger rigs. To balance its playful tendencies, the Trigger’s wheel diameter, head angle, and fork offset produce a stable trail value of 101mm. To further ameliorate downhill twitch, the longer reach (439mm, medium) paired with a short stem and wide bars provided adequate room for a proper attack position.

Aside from geometry, some choice components also aide in bridging the gap between downhill stability and what I would consider a lighter, nimble AM bike. The seat tube is relatively short, allowing for excellent clearance of a 150mm dropper (125mm for small). Although too long for the bottom bracket’s sag height, and bordering on XC weight, SRAM’s Truvativ Descendant cranks are technically built for downhill. Finally, the Maxxis Minion rear tire produces a noticeable amount of drag, but the Trigger climbs so well, it’s worth the trade when pointing the Trigger down. 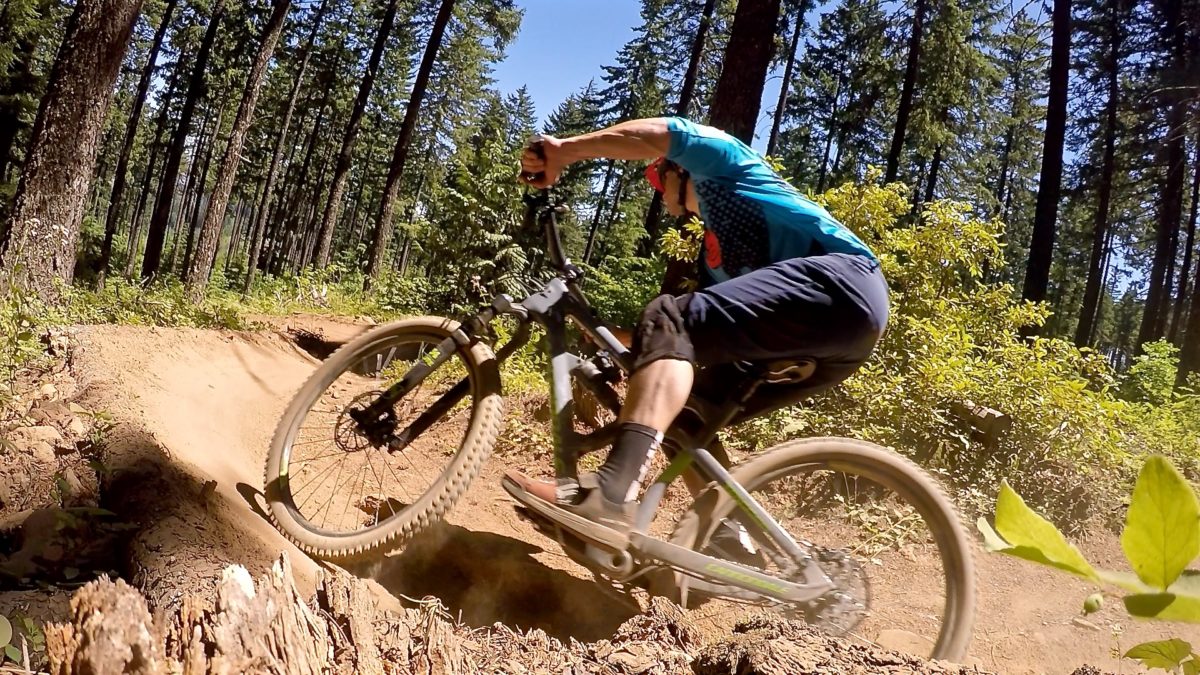 To Hustle or Flow?

First, it is important to note that Hustle versus Flow mode is not a question of climb versus descend. The ability to reduce shock volume is like adding volume spacers (like fork tokens) at the flick of a switch. Flow is a long travel bike while Hustle is short… kind of. In Hustle, not only does the travel drop from 145mm to 115, but the spring rate becomes much more progressive, making it impossible to bottom out travel.

And that is exactly how it felt on the trail.

As a four-bar single pivot with the rear pivot located above and in front of the axle, the Trigger relies a great deal on the tuneability of the Gemini shock. I set rebound, compression, and sag in Flow mode for steep and deep descents so I could get my Hustle on and liven the bike up during smooth, undulating transition sections. The shock allows the rider to utilize the normal Fox compression settings in both Hustle and Flow modes, providing further fine tuning of the suspension. While Hustle wasn’t necessarily intended for climbing, reducing rear travel does mitigate pedal bob, which is further quelled using the normal Fox damper levers. 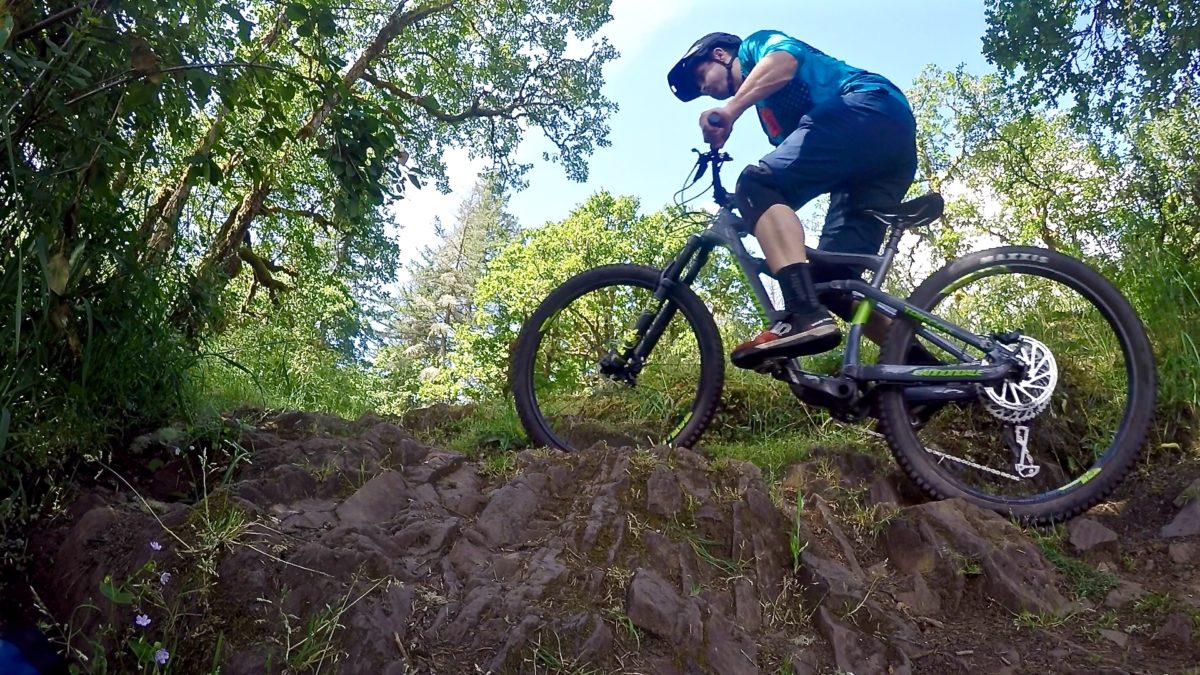 I typically run rebound as fast as possible without causing untoward bucking, but the Trigger seemed happier with the rebound around 50-60%. In other words, instead of the 15 of 20 clicks initially set, I settled with 10-11, which dramatically decreased a distinctive clunk feeling during repetitive rough sections. As a linkage-driven single pivot, it is also possible that braking forces were stiffening the suspension. Aside from that, the Trigger soaked up bigger hits and drops with aplomb.

The Trigger does not aim at any one discipline, is not task-specific, nor does it corner a certain crowd. If you’re looking for that one bike to ride everything well, the Trigger should occupy a spot on your next do-all bike list. With a sub 30-pound build, durable components that perform, and a travel-adjusting shock, I found the Trigger closer to the claim, “climbs as well as it descends”, than any other AM bike I’ve tested. Furthermore, Cannondale ditched the proprietary of old for parts you can work on or replace yourself. They future-proofed the frame and still managed to add a little Cannondale touch — innovation that has, historically-speaking, gone on to influence the entire industry. 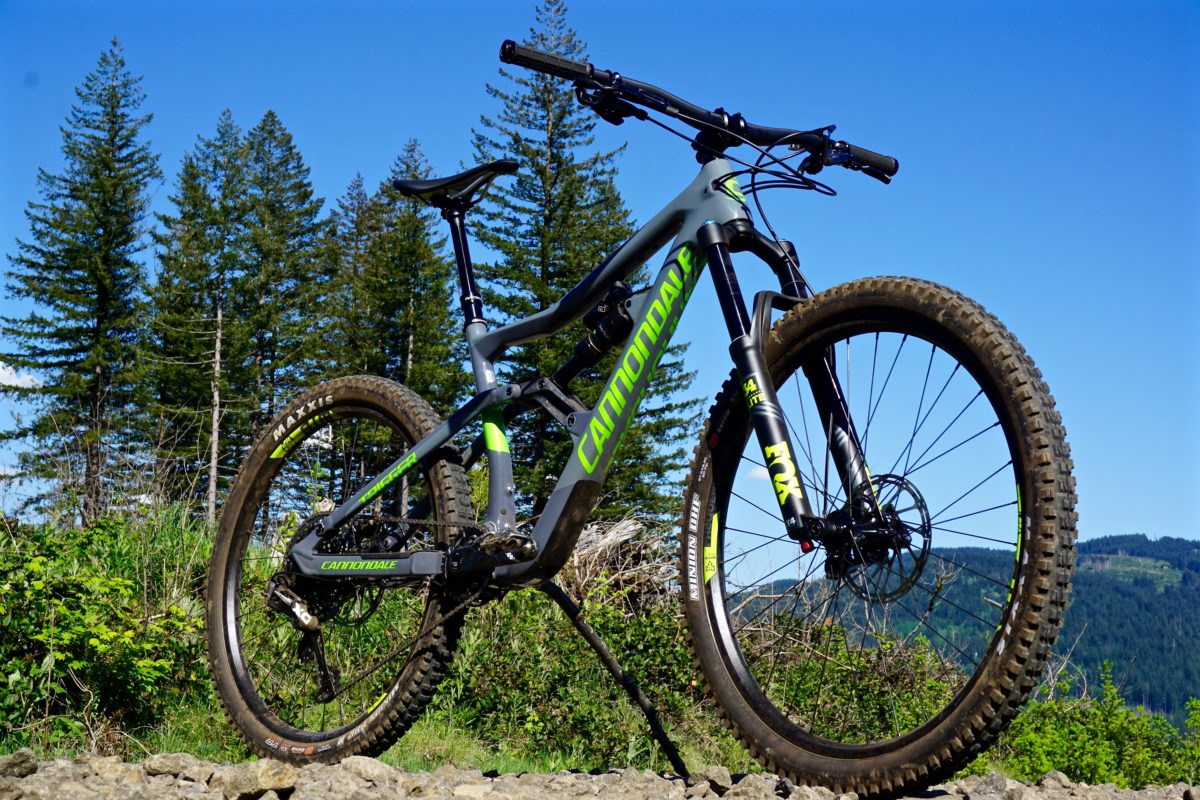 Thanks to Cannondale for lending us the Trigger for this review.

Having done a long term review of the previous gen Trigger, it sounds like they made a bunch of positive changes here! Would love to give this one a go someday.

Good review Chris. I think it was a good idea for Cannondale to ditch the lefty fork. Never trusted that fork. Lots of great changes for this new model.
But for the record, my L 2015 Specialized Enduro has the same chain stay length (42.2 CM) with 165mm of rear travel.
https://www.specialized.com/us/en/bike-archive/2015/enduro/enduro-comp-650b/65258