Advocate Cycles may be new to the fat bike party–and the party in general–as the company is only about a year old, but they’ve already made a solid impression. Not only does Advocate produce a versatile and high-quality–yet small–lineup of bikes, they also employ a unique company setup and have real potential to change the bike industry.

While Advocate may be a new name in the cycling world, that of its founder, Tim Krueger, is not. Krueger was previously the product manager for Salsa Cycles, so making bikes that people want to ride is a familiar concept. Ironically, I re-awakened my love of mountain biking on a Salsa Mukluk, so I was really interested to see how the Watchman would compare.

The Watchman is one of three bikes produced in Advocate’s inaugural year, and is pegged as the “do it all” fat bike. They also produced the Hayduke, a hardtail that can be set up as a 29er or 27.5+, and the Lorax, a road and gravel touring rig.

Check out my On Review article about the Advocate Watchman for specs and some more background on the company and its products.

It took me a few rides to get used to the Watchman. I hadn’t ridden a fat bike in a while, and it felt a little heavy compared to my personal bike. Tipping the scales at right around 33 pounds (size small frame), it’s certainly not a lightweight. But that is the unavoidable nature of fat bikes, especially steel ones, and this bike is certainly no heavier than others in its class. As with any other fat bike, the wider Q-factor (basically the space between the pedals) also felt weird at first, but it wasn’t long before I felt right at home on this bike. I’ve always found that Salsa’s bikes fit me really well, so I wasn’t surprised to discover the same of the Advocate, considering Krueger’s ties to both companies.

Over the past few months, I’ve ridden this bike in as many conditions as possible to see if the “do it all” label holds up. For myself and the kind of riding that I like, it certainly does. I love to go out and ride all day, racking up the miles on a mix of singletrack and dirt roads. I like to climb. I like the challenge of technical sections, and I’ll try a challenging rock garden a few times to see if I can get it, but I usually quickly move along down the trail rather than hang out and play. Descents are undeniably fun, but they aren’t the reason I ride. I like a bike that I feel at one with, that feels responsive but not twitchy, that softens the blow of rocks a little, but still allows me to feel the trail, a bike that will just go up, over, and through anything I have the strength to conquer, and is comfortable to ride all day, every day.

The Advocate Watchman is that bike.

I’d been hoping that having a sweet fat bike would be a good excuse to take a vacation and try out some beach riding, but the season got away from me and that never happened. So I settled for the shores of local Raystown Lake, which is a favorite winter riding spot. The lake level is drawn down in the off-season, exposing a shoreline that is a mix of deep mud, sand, rocks, and plenty of fallen trees. These conditions usually lead to much frustration on a 29er, but they were much easier to explore on the Watchman’s 3.8″ tires mounted on the Alex Blizzerk 90mm rims.

The rocky, mountainous singletrack that is so prevalent in central Pennsylvania was really fun to rip on this bike, and even in dry conditions, I was happy to have the extra confidence and traction that fat tires provide. It felt very stable while descending chunky stuff or plowing through rock gardens. Despite its steady, balanced feel, I found that the Watchman is also quite maneuverable, not at all like the tank to which many fat bikes are equated. Rather than feeling unwieldy, it simply rode like a mountain bike with big tires.

Later in the season, we finally got some snow, and I couldn’t wait to test out my fattie in the white stuff. It continued to perform well, plowing through slush and powder alike, and with the right tire pressure, I felt unstoppable. When a big snowfall rendered the trails unrideable for a brief period, I turned my attention to gravel roads and snowmobile trails (the sleds pack it down nicely for fat bikes). The Watchman didn’t feel nearly as cumbersome as I thought it would during long slogs up snow-covered roads.

The only time I really noticed its weight and the extra rolling resistance of fat tires was on super steep climbs and hike-a-bike sections. A couple weeks ago, I did a ride that involved carrying our bikes for a couple miles up a trail that was difficult to walk up, even sans bicycle. I definitely would have wanted a lighter bike in that instance, but for the vast majority of rides, weight was a negligible factor.

The frame is designed to run a 100mm RockShox Bluto fork, which comes stock on the complete Watchman. To be honest, I had always thought that suspension on fat bikes might be overkill. However, after getting on the Watchman, I quickly fell in love with the extra cush that the Bluto provided, especially on descents. With the extra confidence and traction that fat tires provide, along with the forgiveness provided by the fork, I was hurtling down technical downhills faster than ever. Yet the ability to lock out the fork preserved the raw feel of hammering out a grueling climb on a rigid bike. The Bluto really seemed to fit the Watchman well, and I can honestly say that my opinion of suspension on fat bikes is forever changed because of it.

The Advocate comes equipped with a SRAM GX drivetrain. At this point, 1×11 drivetrains are certainly nothing new, but this was my first experience riding one for any extended period of time. I really prefer a 1x drivetrain over a 2x, so it was really nice to have the extra range compared to a 10- or 9-speed setup, but not have to deal with a front derailleur. The 12-42t cassette with a 30t chainring up front allowed me to crank up steep stuff in my granny gear (which I used a lot more than I’d like to admit), but also rip it on gravel roads and keep up with the skinny tires. 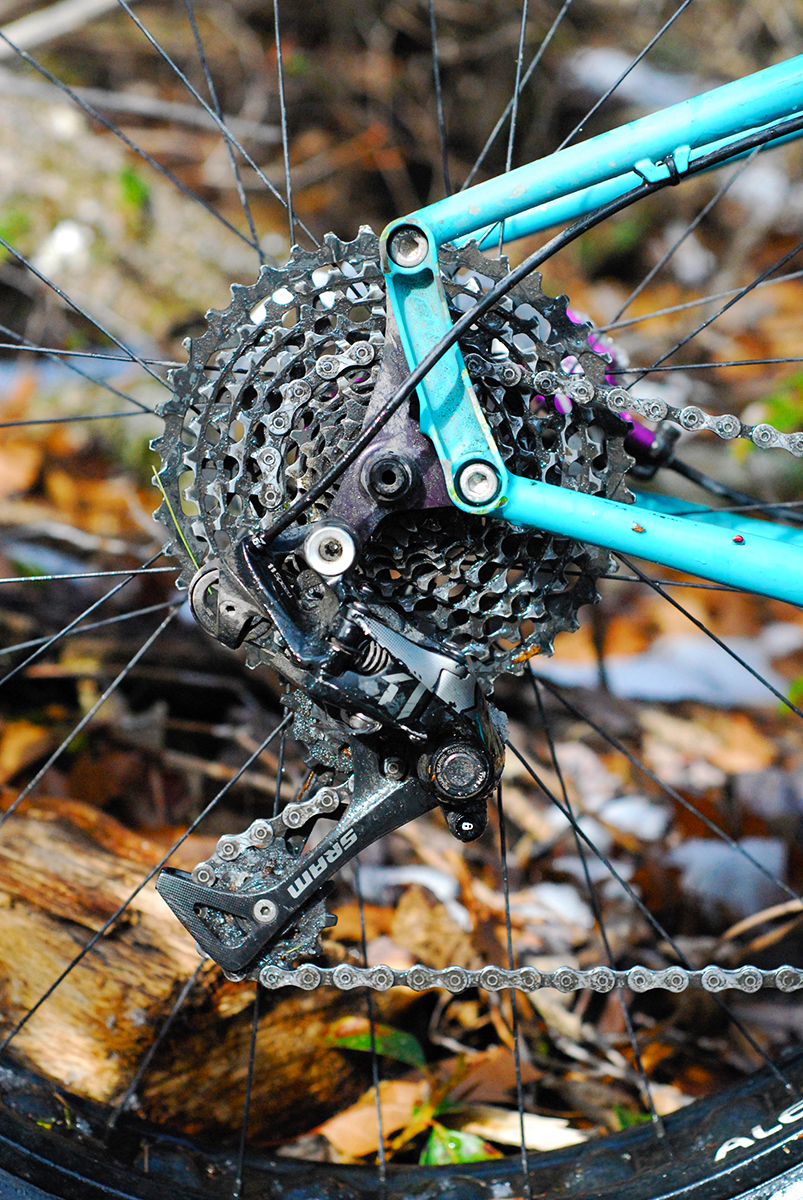 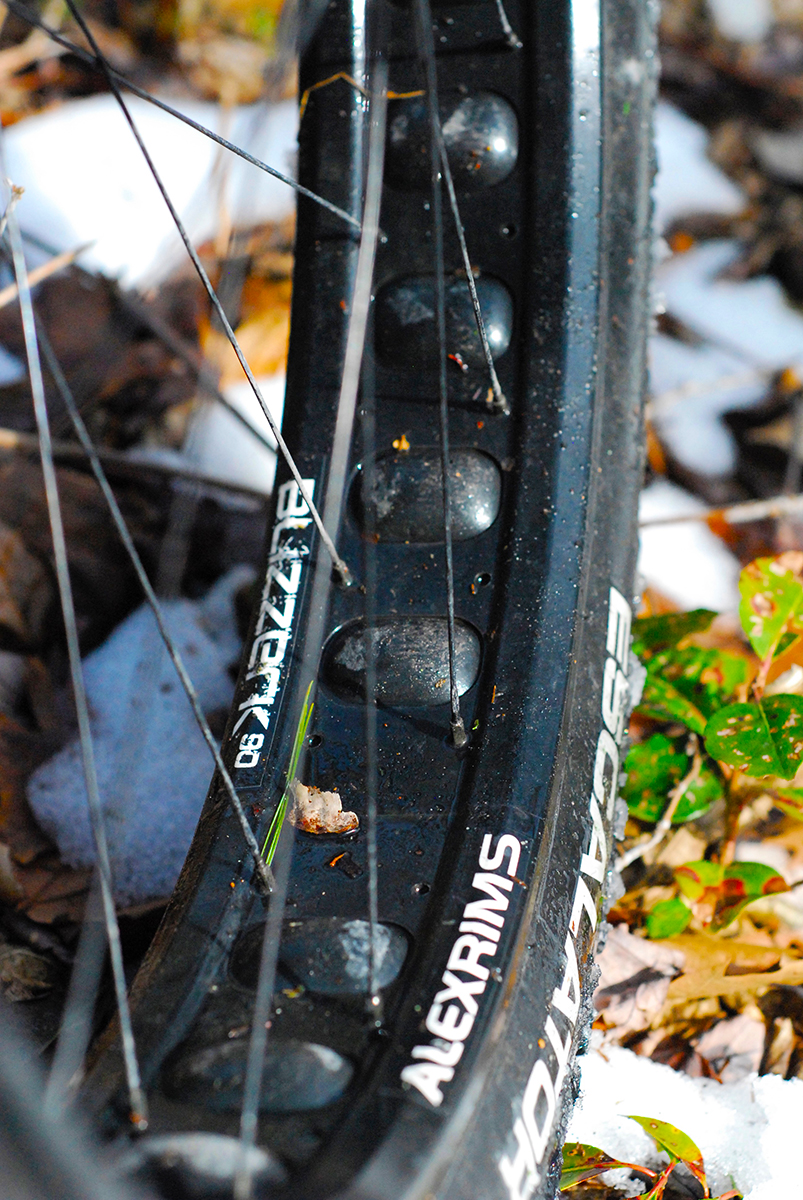 One of my favorite things about steel bikes is that I don’t feel like I’m going to break them. I put my bikes through their paces: Pennsylvania has a lot of rocks, and I crash a lot on them. I ride long and hard and often put my bikes away wet. I treated the Advocate no differently. I rode that thing in the slush and mud, left it outside on my porch, and got back on it to find that it performed as well as always, every time. I lubed the chain every now and then, and had to add air to the Bluto a couple times, but that’s it. I had no major issues with the bike during the entire 3-month test period.

The bottom line is that this bike is awesome, and quite frankly, I am really sad to be giving it back. I absolutely loved ripping around on it for a season, and I wouldn’t hesitate to ride this bike year-round. It’s a bike that I wanted to ride all day, every day, and it was well-suited to the type of riding that I do.

So who shouldn’t buy this bike? If you’re a gram-counter and care a lot about saving weight, this bike (or any steel bike) probably isn’t for you. Otherwise, it is a very capable and fun all-around ride.

Gear
Mountain Bike Tire Repair Tips: From Emergency to Semi-Permanent
Gear
These MTB Deals are Fire, including 40% off Patagonia Dirt...
Gear
The Maxxis Minion DHF Tire is Still the One to...
Gear
Never Underestimate the Power of a Good Zip-tie
Subscribe
Login
Please login to comment
2 Comments
Most Voted
Newest Oldest
Inline Feedbacks
View all comments

Great to see this review, Helena. I took delivery on a Watchman last week but I’ve not been able to put it through its paces, as all the local trails are closed due to the freeze/thaw cycle we’re having here in southern MN. I’m waiting delivery on the Bluto fork, so I was glad to see your conclusion about it.

Will I be inclined to sell my hardtail 29’er? I thought not but after reading your review…

Griff, you won’t be disappointed by the Bluto! As far as your hardtail 29er goes, you just might! The Watchman was a lot more versatile than I expected, and a lot more fun in dry conditions than I’d anticipated as well. As I said, it rides like a mountain bike, not necessarily a fat bike, yet it does all the things a fat bike is meant to do too. I hope you enjoy your Watchman as much as I did!