If you’ve picked up fat biking and have attempted to partake in this chilly version of mountain biking for any length of time, you probably know that you can get away with a standard pair of shoes, warm socks, and waterproof shoe covers for the occasional ride. However, if you try to ride with such a setup often enough, you will soon realize that you are guaranteed to have cold, wet feet by the end of your ride, more often than not. Cold, wet feet make fat biking not very much fun. The Wolvhammer boots, on the other hand, are purpose-built fat bike boots that are designed to keep your little toes warm and your feet happy, even in temperatures down to 0 degrees 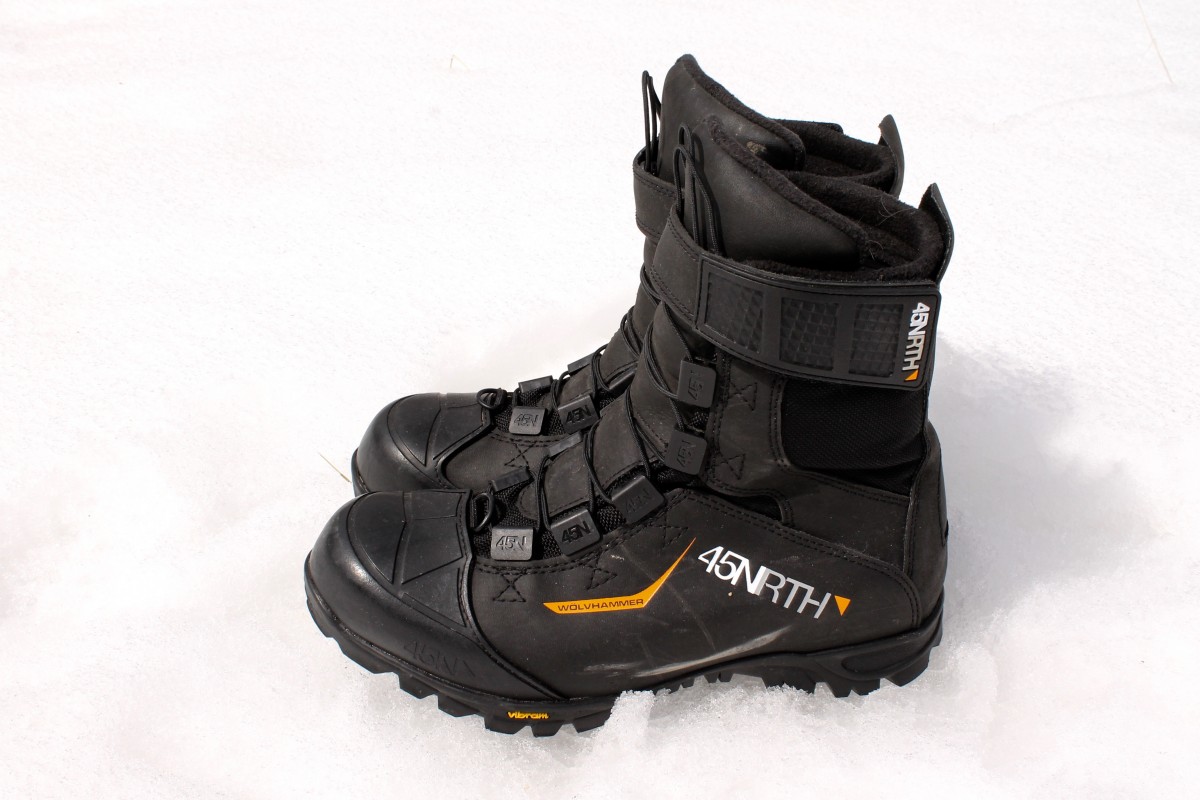 Modeled after mountaineering boots, the latest rendition of the Wolvhammers feature a pull lace closure with a velcro strap around the top of the boot. This closure system is updated from the previous zippered model, which some reviewers noted was not durable and would often pack with snow.

The exterior of the boot features a 100% full grain cowhide leather and ballistic nylon on the upper, and a Vibram rubber outsole. The boots come setup ready to ride on flat pedals, or you can unscrew a small plate from the bottom and install SPD cleats for clipless pedals. 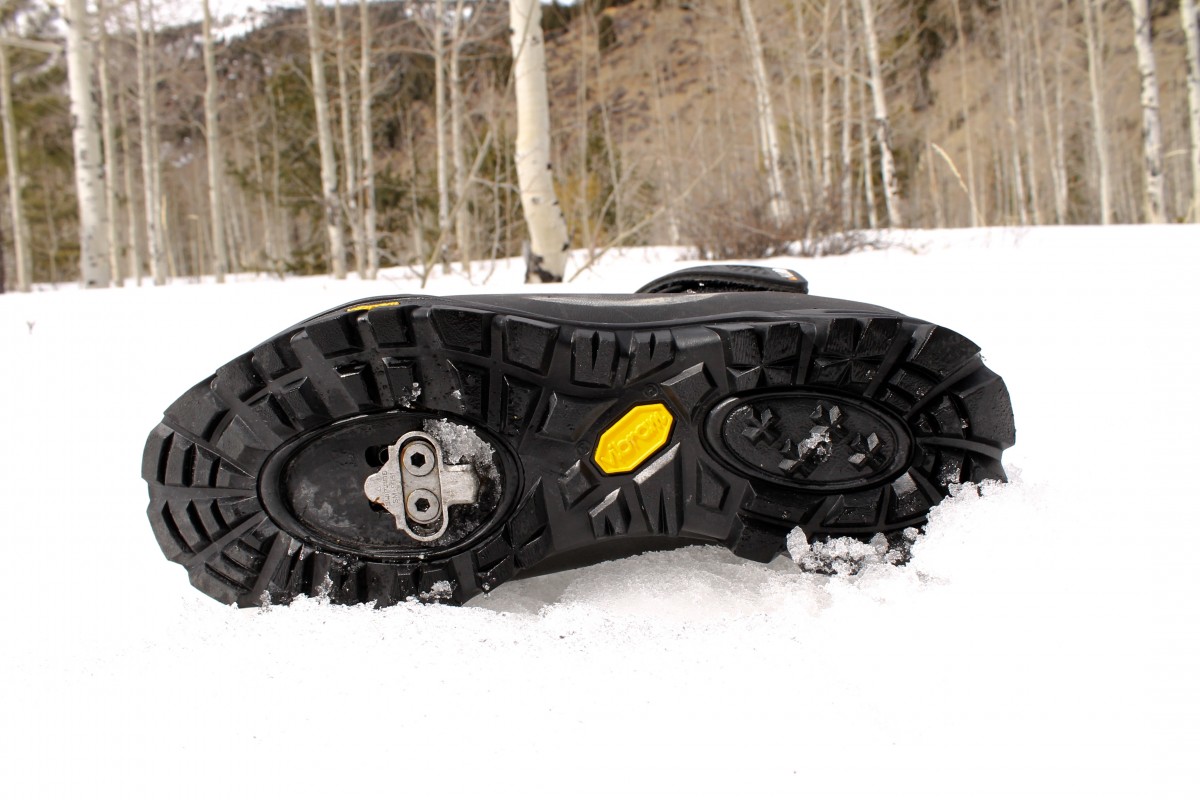 In order to keep heat from leaking out through the metal cleats, 45NRTH has incorporated a Primaloft aerogel insole under the foot to keep the heat in. Additionally, a waterproof, breathable membrane helps with moisture control, the mid-calf height generally helps keep out the snow, and if that isn’t tall enough, an integrated gaiter hook on the toe makes installing taller gaiters a breeze.

Weight: 715g per boot with cleat installed–1430g for the pair, including Shimano SPD cleats.

Some folks have recommended going up a size when buying a pair of fat bike boots in order to have enough room for extra-thick socks, but I ordered my standard shoe size and found that the Wolvhammers had plenty of room for warm socks. These are by no means a tight-fitting boot, and the extra room is probably intentional on 45NRTH’s part. While I was very pleased with how they fit in my standard shoe size, as always, I recommend trying before you buy.

After mucking around with shoe covers and a slew of generally uncomfortable half-measures, finally fat biking with a boot designed for the job was an eye-opening experience! Ah, this is what it’s supposed to be like: simple, intuitive, warm, and dry. In fact, I might go so far as to say that the Wolvhammers are the one product that could single-handedly make fat biking a thoroughly enjoyable experience despite the cold and the snow!

But let’s get down to the nitty gritty. I found the sturdy hiking boot-style outsole to be incredibly welcome when hiking in the snow: the traction and confidence was a weight off of my shoulders after slipping around in standard shoes. Also, I found that even in 3-4 inches of fresh snow, I was fine hiking in the Wolvhammers. You really only need to add gaiters if you think you’re going to be postholing to the knee. The gaiter hook really was extremely useful and while 45NRTH sells their own gaiters, I found the Wolvhammers to mesh well with rather generic gaiters from a different brand.

While I know many folks prefer flat pedals on their fat bikes, I’m an SPD addict, and having a cleat easily mesh with these boots felt perfectly natural and normal. However, don’t expect to get the same pedaling feel that you would with a standard XC or enduro shoe. These boots are literally twice the weight of a cross country shoe, so the pedal stroke takes more effort, since you have more weight to move around. But isn’t that the way everything feels on a fat bike?

At first I found the pedal stroke to feel a bit odd with the wider sole of the boot, but quickly I realized that there were no ill effects–I was simply used to a tighter-fitting shoe. Finally, I initially anticipated that the motion of my ankle through the pedal stroke would be inhibited by the mid-calf-height of the boot. However, it turns out that I was dead-wrong: these boots articulated superbly, and I felt no limitations in ankle flexion while pedaling.

The closure on previous versions of the Wolvhammer has received a lot of hate, and after researching it and examining some older models, I can understand why. But thankfully, it appears that 45NRTH has successfully fixed that issue! With the new pull-lace closure, there’s really no way for snow to block up the system. While there is a velcro strap across the top, since the strap is so high up the boot it essentially never encounters snow, meaning that even if you need to adjust it mid-ride, it’s likely to work just as fine as it does in the warmth of your home.

To make a long story short, I had not a single issue with the 45NRTH Wolvhammer boots. While they aren’t cheap with an MSRP of about $325, I wish I had bit the bullet and purchased a pair when I first started fat biking. A quality pair of boots like the Wolvhammers can turn what might otherwise be a cold, wet, possibly frost bite-inducing experiencing into a care-free frolic through a winter wonderland.

Thanks to 45NRTH for providing the Wolvhammer boots for review.