Click here to read part I of this long-term review.

As I’m sure you’ve already gathered, the XC components and geometry make the Jamis Dakar SixFifty B Pro a very capable climber for a 5.5″ bike. If you don’t feel like you need full squish on the climbs, close the gate on the rear shock and dial the compression all the way up on the fork to drastically reduce the amount of travel and stiffen the suspension up. With a weight of 27.72 pounds (without pedals and without dropper post), the Dakar 650b Pro is very light for an aluminum-framed 5.5″ travel rig.

If you’ve recently reread my initial test post from February, I mentioned that the front end felt really squirrelly on the climbs. Later, I noted in my pre-road trip blog post that the issues I had with the Dakar’s climbing performance at the Southeast Bike Expo were easily resolved through a careful cockpit setup. Taking the time to set up the bars, grips, brakes, etc. to my height and preferences made a world of difference. 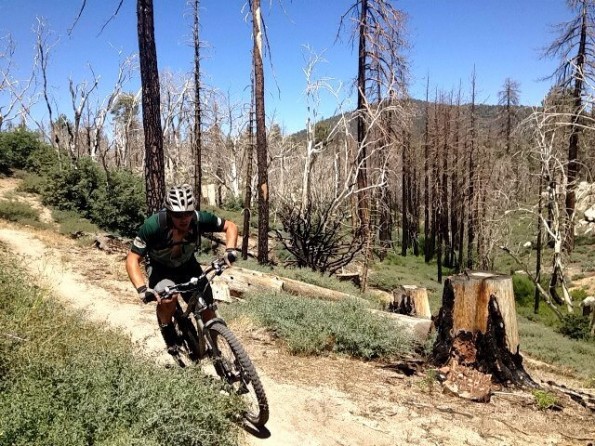 When pointed downhill, the Dakar was super confident and felt very well balanced once I had my suspension properly fine-tuned, as I’m sure you could also gather from part 1 of this review. The bike tore through and straight over anything I pointed it at: gnarly, extended rock gardens; jumps; drops and series of drops; smooth straightaways; and flowy turns.

At first I thought the rear end might be a little too stretched out, but whatever small bits of maneuverability the chainstays sacrifice is more than made up for in the stability they offer. After my initial adjustment period, I found the combination of the chainstay length, Kenda Nevegal rear tire, and suspension design made for an a very predictable drifter. Thanks to the very loose, dry terrain of Southern California, I had many chances to get intimately acquainted with how well this bike drifts.

“Hey, how do you like those 650b wheels?” was a question I came to expect every time I wheeled the Dakar into a bike shop or stopped to chat with locals out on the trail. My response to that question hasn’t really changed since my first blog post from February:

[650b wheels] performed exactly like youd expect them to.No, seriously: theyre a perfect blend of 26″ wheels and 29″ wheels.

They roll over roots and smaller obstacles better than 26″ wheels but not as [well] as 29″ wheels.

I know you probably don’t like that response, as it seems a little predictable, but it’s the truth! Imagine a blend of 29″ and 26″, and there you go. I will say this: I think 650b is a great wheel size for longer-travel dual suspension bikes.One thing I do know is if I was given $5,000 to spend and I had to buy a bike tomorrow, I doubt that it would be a 26er.

In my personal opinion, I think we will see wheel sizes filter out by application. I believe that we will see the best wheel size for the job win out. It might look something like this:

Of course, I think there will probably be exceptions in almost every category. Only time will tell.

In the end, I don’t like to get pulled into the wheel size debate. While maybe certain wheel sizes work better for certain applications, the truth is, if it’s a well-designed bike, it will probably be a heck of a lot of fun to ride, no matter what size the wheels are.

I wish my entire experience with the Dakar SixFifty B had been positive, and while my review will end on a high note, it took a while to get there. As regular readers will no doubt remember, I broke the frame at the top of the seattube while riding The Whole Enchilada in Moab. 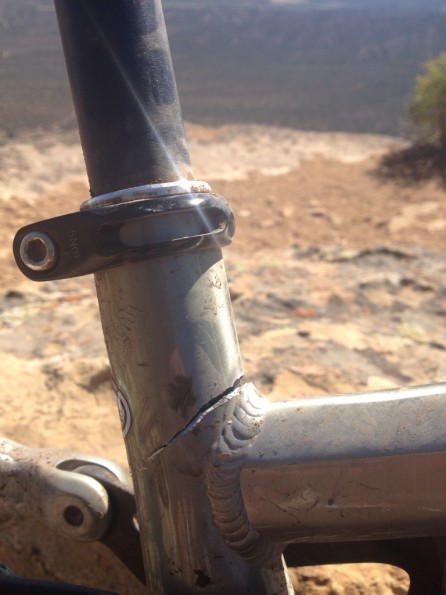 As you can see in the photo above, I did have the dropper post shimmed to fit the frame. Jamis postulates that this put undue stress on the tube, causing the break. However, I have run this exact same setup (post and shim) for much longer periods of time in other bikes I own with no issues whatsoever.

Of course product failures are undesirable whether it be as a result of manufacturing or rider error. That frame was designed and tested with the use of a 31.6mm seat post. Sure, it is common to use shims to fit other size posts in a frame but we have not tested the stresses that it can cause to that area nor can we control the fit and/or tolerance of all aftermarket shims. We would always recommend using parts that are equivalent to Jamis original spec to be confident in the performance of the product.

Despite this unfortunate occurrence, it is important to note that Jamis stands behind their products 100%. While I was bummed to have broken a frame, I told them about it and they immediately shipped me a new one which I got installed in San Francisco. Due to the nature of my road trip, I know it was a pain for Jamis to go through the trouble of finding a place to ship it to where I could easily pick it up… but they did. In addition, their Northern California rep took it upon himself to perform the frame swap for me–now that’s dedication! Finally, in order to ensure an accurate test going forward, Jamis also included a Joplin dropper post that fits the frame perfectly.

So was I able to break the frame again? NO. I had less than 200 miles on the first frame when it broke, and after receiving the new frame and seatpost I put another 400+ miles of punishment on with no issues. After the break, I pushed the new frame even harder to see if I could replicate the results–and I couldn’t.

Was it a fluke? Was it the shim? I’m not sure, but now you know all the facts and can decide for yourself.

Unfortunately, the broken frame wasn’t the only issue I experienced during my test. I was having trouble getting full travel out of my rear shock, and at first I thought that I wasn’t setting up the sag or tuning the shock correctly on my end. After communicating with Jamis, it turns out that I was doing everything correctly–the problem was the internal tune of the shock didn’t mesh well with the size small frame. Even if I totally oversagged the shock, it was still wallowing in the middle of the stroke, and there was no way that adjusting my air pressure or the external settings would allow me to use the entire shock stroke. 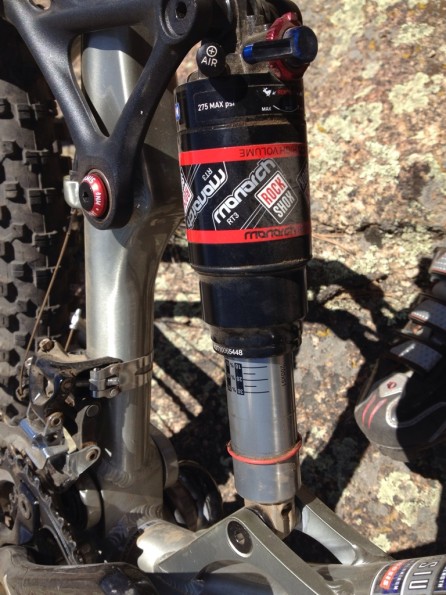 There was almost an inch of unused stroke.

Again, Jamis was more than cooperative and shipped me out a replacement Fox shock with a better tune. After installing the new shock, I was successfully able to achieve full rear end travel!

I found the fact that this production bike had shipped with an incorrect shock tune very surprising. While I personally view the frame break as a total fluke, the incorrect shock spec is troublesome. According to Jamis:

…we work closely with Rock Shox engineers to achieve the best possible shock tune for our suspension bikes. We’ve had that shock tune spec’d for 2 seasons on this model with no other instance from the field of not getting full travel. This makes us speculate that this shock was produced or labeled incorrectly. It would need to be disassembled by Rock Shox to determine this.

Curiously, at the same time I was having issues with my rear shock, I read on BetterRide’s Facebook that Gene Hamilton had rented an older Dakar SixFifty B model and also couldn’t get full travel out of his rear shock, despite 30% sag and a four-foot huck to flat. This leads me to believe this isn’t just a one-off occurrence, but without riding every single small-size frame in the Jamis fleet it is tough to determine whether this is just a freak accident, an error on Rock Shox’s end, the factory end, or the engineering end. Hopefully this issue isn’t pervasive, but if Jamis’s willingness to work with me is any indication, the company will work to resolve it! 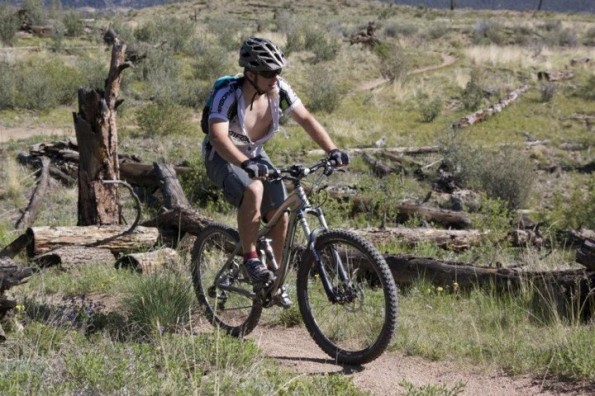 While some of the above issues were a little frustrating to work through, after finally getting a new frame with a properly-fitted seatpost and a new rear shock with the proper tune, the Jamis Dakar SixFifty B Pro has been an absolute pleasure to ride! By the time this review goes live, I will have probably put 700 miles of dirt, rock, (and some air time!) under my tires, and I have been loving (almost) every minute of it!

After resolving the issues, the SixFifty B has been a very solid, dependable bike whose versatility seems to be its defining characteristic, from keeping pace with downhillers at Big Bear to pulling the front of the pack on fast-paced cross country rides. I am not looking forward to taping up the bike box and shipping this rig back to Jamis; this is the kind of bike that I can ride day in and day out and feel like a champ as I do it.

A huge “thank you” to Jamis for providing the Dakar SixFifty B Pro for review and for working with me throughout this review!