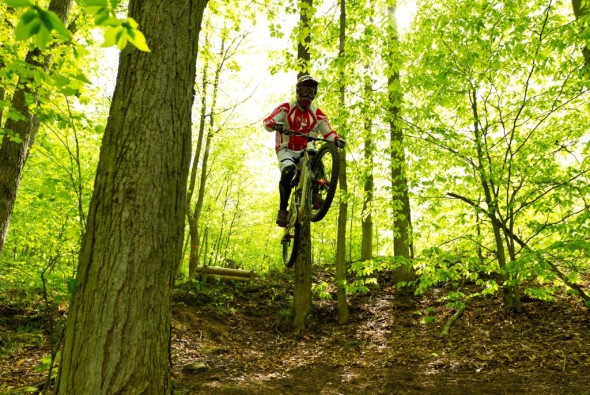 FOX is one of those companies that doesn’t stop tinkering. Every year for the past few years I have seen improvement upon improvement and this year is no exemption. The shiny new 2011 36 TALAS FIT RC2 180 is exactly what I am talking about, with a host of improvements and brand new features. In fact, this is the first year FOX has produced a much needed 180mm version of the fork.

First, the most obvious features: a new lower leg assembly and Kashima coated stanchions. The upper crown and hidden longer stanchions aren’t as obvious but they’re equally important. FOX wanted to make sure the TALAS was as bullet-proof as possible so they added extensions below the axle in the lower housing to allow room for the stanchions under full compression. The thinking is they wanted to spread the bushings as far apart as possible to better manage twisting and torsional forces. 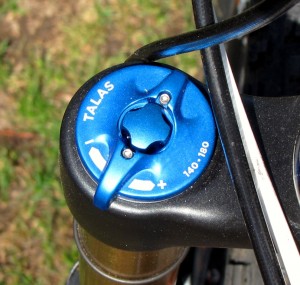 Each model in the RC2 lineup features an all-new FIT RC2 inverted damper for consistent damping performance and reliability. The new FIT RC2 damper lowers un-sprung weight which essentially allows the fork to react more quickly for better steering control. The internal single-wall bladder has been engineered to hold all the fluid and provides consistent, fade-free damping by preventing the fluid from aerating. The inverted design offers the same range of adjustability as standard but the compression adjusters have been moved to the top of the stanchion for convenience. The rebound control, which is a set-and-forget kind of item, is now located on the bottom of the fork.

The TALAS 36 180mm has an incredibly large amount of bushing overlap. A look at the new below-axle tube design give you a hint of what had to be done to create this extremely stiff chassis. The upshot is Fox offers the lowest axle-to-crown distance available in a 180 mm fork. The RC2 model pictured comes with Kashima coated stanchions which provides nearly stiction-free performance for quicker suspension response and improved durability (longer life). The two step adjustable travel on the new 36 TALAS, with its ergonomically-pleasing TALAS lever, makes it super easy (even with gloves on) to toggle between 180mm to 140mm of travel. 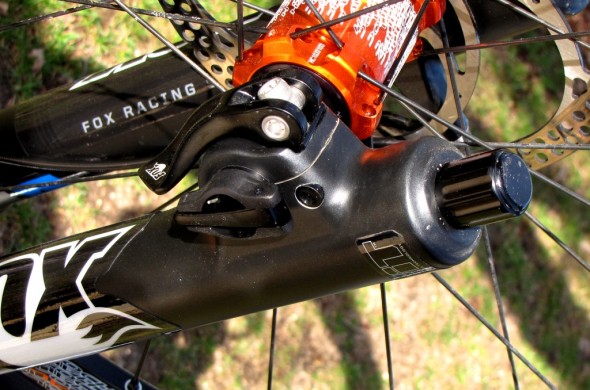 Installing the TALAS is pretty much like any other fork – just remember to measure twice and cut once. The tapered head tube can be cut with either a pipe cutter (with a fresh blade) or with a Park SG-6 Threadless Saw Guide and saw (my method of choice). Install the star nut and lower race and you’re pretty much good to go (always torque the bolts to the manufacturer’s recommendations).

After the fork is installed on the bike it’s time to get things dialed in. As I mentioned before, the controls on the new TALAS are not the same as older units which speeds up the entire process. Remove the center dust cap on the left leg, making sure you’re at full travel, and set the pressure so you have 25-30% sag and that’s about it for the air spring. If for whatever reason the o-ring is missing, place a tie wrap to get your reference point. There should be about 45mm of sag. After dialing the sag I started working on compression and rebound settings. Keep in mind I am 200lb with gear, armor, and shoes so my pressure was set at 74 psi. 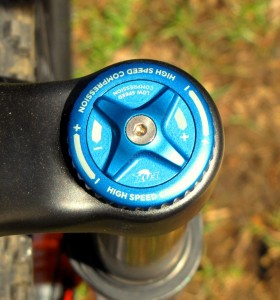 Low speed compression is set using the smaller inside blue knob on the right fork leg. When setting the low speed compression youre looking for the balance point where you can hit the brakes or accelerate without having the front of your bike dive or excessively move. Ride hard and hit the brakes, noting how much the bike pitches forward. You dont want the bike to blow through the travel but at the same time you dont want the fork to stay rigid. Ultimately you need the fork to follow the trail as closely as possible. I ended up setting the LSC to 9 clicks from full (+).

For me the high speed compression (top outer blue knob) took more work to get just right and I ended up sessioning a few jumps to get it dialed in. Most riders will probably only need to set this once after finding a satisfactory amount of control. Adjust your high speed compression setting so the fork doesn’t blow through its entire travel too quickly when taking a big hit (active word here is BIG). Keep adding damping until you have a controlled fork compression without the fork eating up all its travel and bottoming out (stopping abruptly in its internal bump stop). You will know you have too much high speed compression when you feel your wrists compress and an uncomfortable amount of force travels through your body on impact. I ended up with 9 clicks from full (+) to get the HSC where I wanted it. 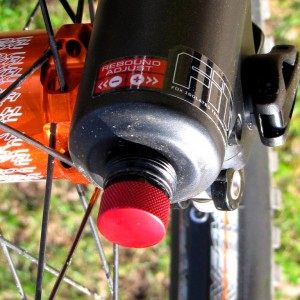 Rebound is the next setting to manipulate and you can also do this one on the trail. Here youre looking for a controlled return to ride height after the fork compresses. You dont want the fork to feel like its a bucking bronco, tossing you off the bike on return (too much rebound) nor do you want the fork to come up so slow that it feels like the fork is losing travel over multiple bumps (too little rebound). My rebound setting was smack in the middle at 9 clicks from full (+).

Performance on the trail

So how did the FOX TALAS 36 perform? For a 180mm fork I noticed the initial bit of travel is very plush and then ramps up a bit mid stroke to end stroke. This actually works great because it absorbs a lot of the small trail chatter and unevenness that could cause the wheels to slip. Speaking of slip, the huge stanchion and bushing overlap really keeps this fork stiff and tracking where you want it.

Tracking through rock gardens is cruise-missile-like – even those hard-to-traverse round rocks that are sometimes tossed in the trail “just for fun. Height adjustment also works flawlessly. At Blue Mountain I ran the fork on my Nelson back to back with my other DH rig and found I actually gained a second on some runs, probably due to the greater control I found in the corners. Compared to last year’s TALAS the controls are easier to use and the 40mm drop on the front for most bikes is just about right to make you want to tackle that climb rather than hike-a-bike. 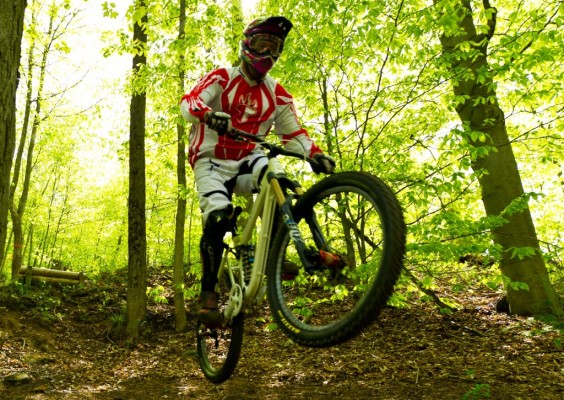 Now if you’re looking to lose some weight with a buttery smooth outta-the-box kinda fork with adjustable travel from 180mm – 140mm of travel, then test ride the FOX TALAS today. And if you’re a female rider who wants a truly kick butt setup, the TALAS gives you a lightweight front end and 180mm of travel yet still turns very well. The great thing is that the TALAS comes in 4 flavors that just might fit the bill if you’re in the need of a fork that’s 160mm+ for your AM-DH bike. At $1090 MSRP this is not the cheapest option out there but it’s a solid purchase for sure.

Overall ratings (out of 10)

I would like to thank FOX for sending out the TALAS for a review.