What if we just kept riding all night? On the evening of the summer solstice, fourteen mountain bikers decided to find out.

Admittedly, mountain biking all night isn’t really that crazy, especially for seasoned bikepackers and endurance racers. But since I’m neither, I figured my best shot at keeping my pedals spinning until dawn was to make my attempt on the shortest night of the year.

According to Alexa, the sunset in Atlanta would occur at 8:51p and the sun would rise at 6:28a, so that meant we would be riding for at least nine and a half hours.

8:32p: Get off the MARTA train at King Memorial Station.

8:46p: Depart Loose Nuts. Employees and customers stick around to give us a proper send off.

8:48p: Flat tire. This is the first of many mechanicals, and yes, this literally happened two minutes into the ride. We would be here, in Grant Park, for the official sunset. 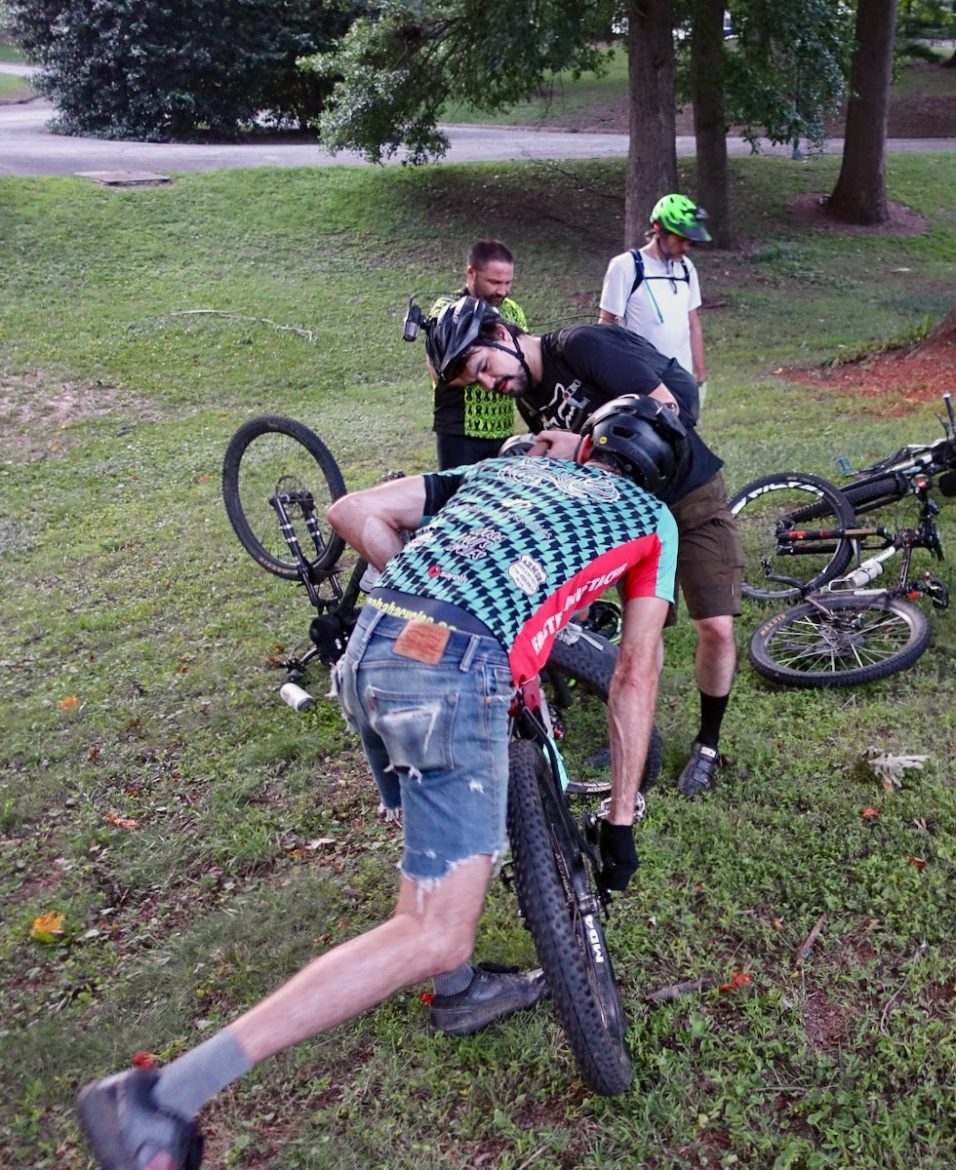 9:08p: We finish riding a short stretch of the Beltline, then peel off onto improvised singletrack. I have an all-in-one light on my bars, and another on my helmet, plus two or three spares in my pack. I’m not sure how long my lights will last, so I mostly run just one at a time, on low, alternating between the bar for road sections and the helmet lamp for singletrack. The pace is generally pretty chill so I don’t need a lot of light.

9:38p: Enter the powerline cut. We had ridden this stretch at night before, but that was back in the spring before the weeds took over. Plants towered above our heads in spots, and the guys in the front had to beat down a path through vines and briars. Someone lost a light in the brush, but there was no way anyone was going back to look for it.

10:12p: Change of plans. Brad mapped out a beautiful route for our all-night ride that would take us to some fun trails we don’t usually have time to ride on a normal Tuesday night. But we were already way behind schedule, and Chris was trying to meet up with the group and would never catch us if we headed south. So, we skipped ahead toward Skyhaven.

10:25p: Eric lost his light on a short, steep section of trail so he and a few others go to look for it while we wait for Chris to intersect with our shared dot in the Google Maps app. As soon as we stop moving, sweat pours off my head and arms due to the heat and humidity, even though the sun has been down for more than an hour. My single water bottle is nearly empty already. Chris catches us, and after 22 minutes and no sign of the light, we decided to get moving again.

10:50p:  Sharif, “bro-owner” of the Spindle, bends his chain all out of whack, causing a delay. We take a couple short laps through Skyhaven and wait for the rest of the group to catch up. Chris, who joined the ride less than 30 minutes ago, breaks a pedal and hurries home to swap it out. He’ll quickly catch up to the group again. 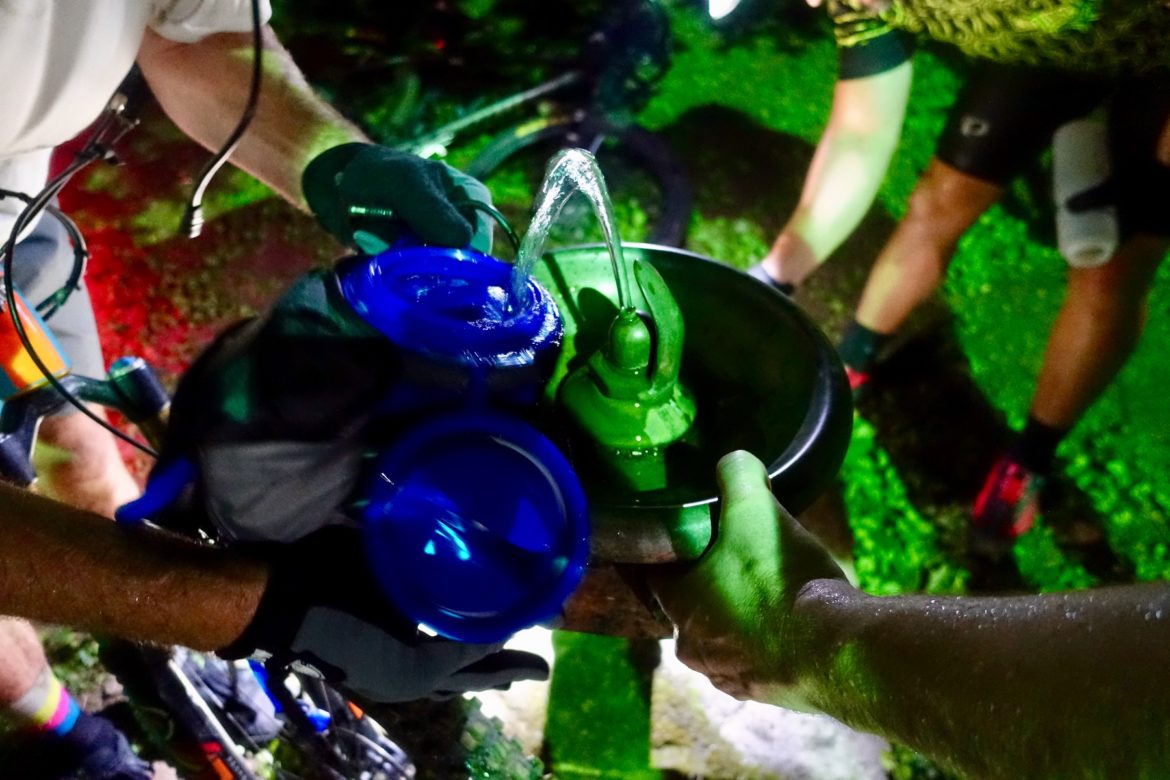 11:32p: Water stop at Brownwood Park, and there’s a constant line of hydration bladders and bottles to be filled. Some of us are getting hungry, and we’re worried the bars will stop serving food before we arrive. Brad and Mike study a printed paper map and strategize. 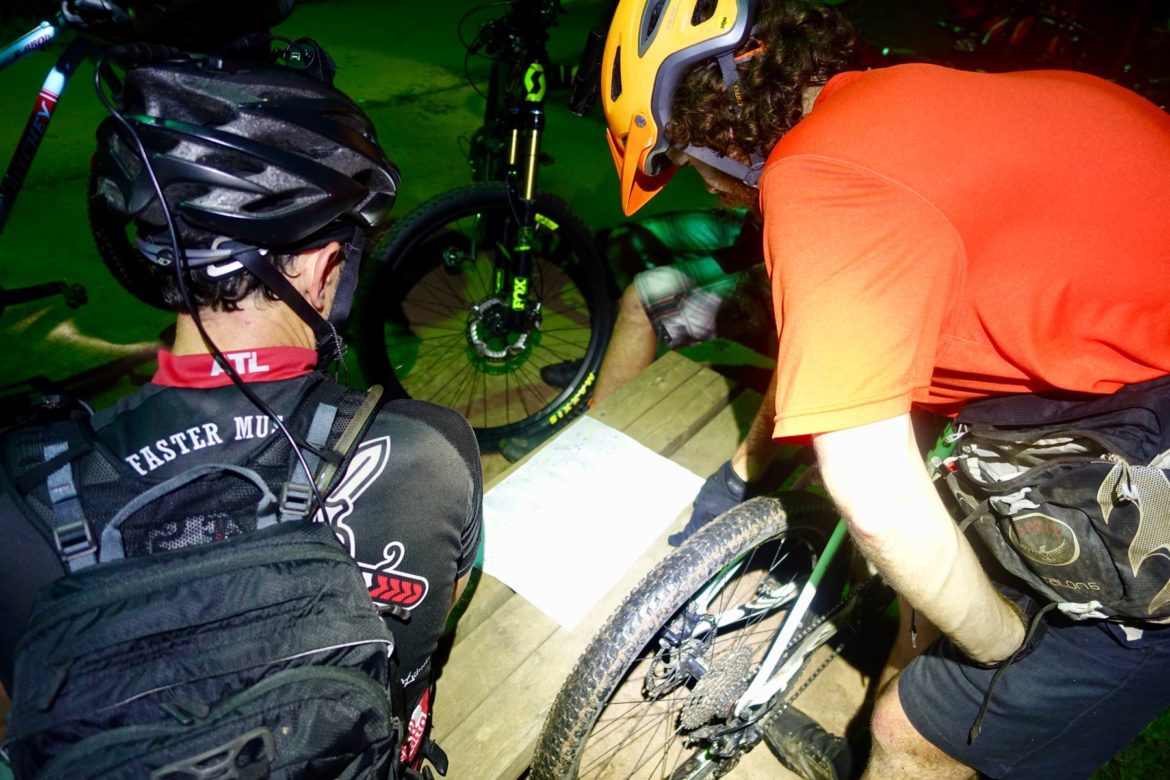 12:28p: First stop for food and beverages. The sign on the door at Twain’s Brewpub says they’re open until 2:30a, but we’re told the kitchen will be closing in 20 minutes so we get in our food order quickly. People are ordering burgers, sandwiches, and pitchers of beer. I grab a plate of nachos. 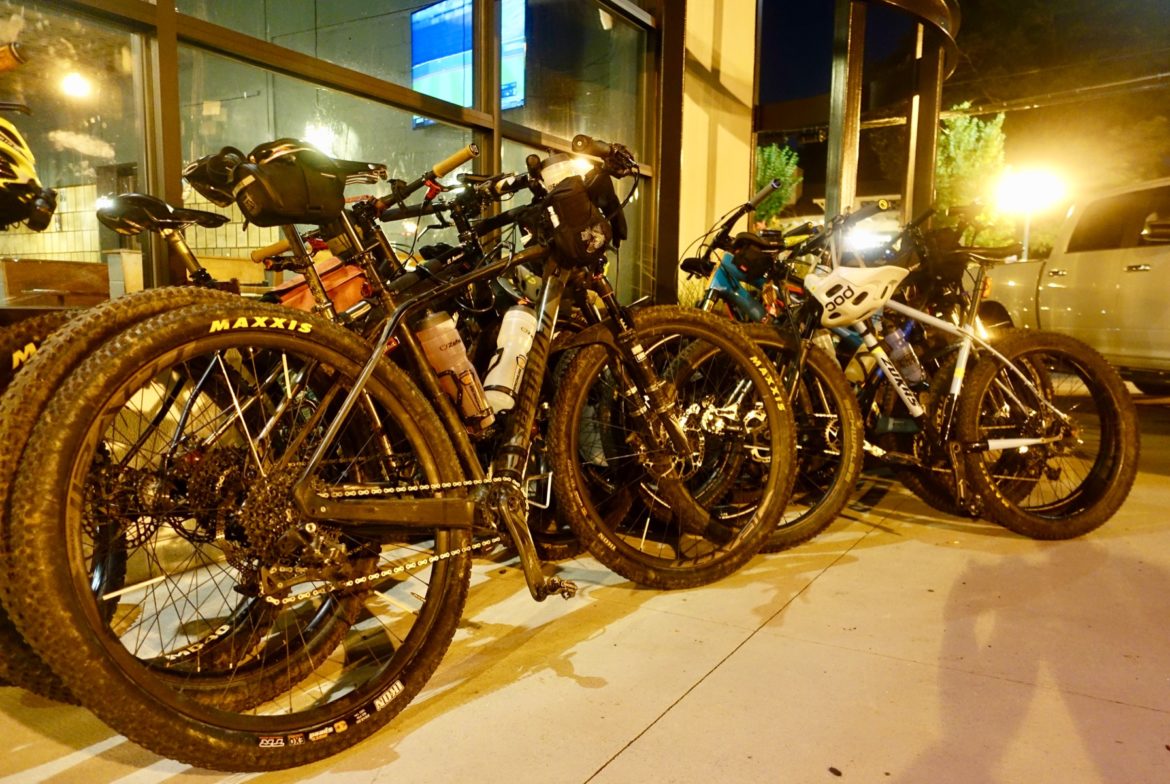 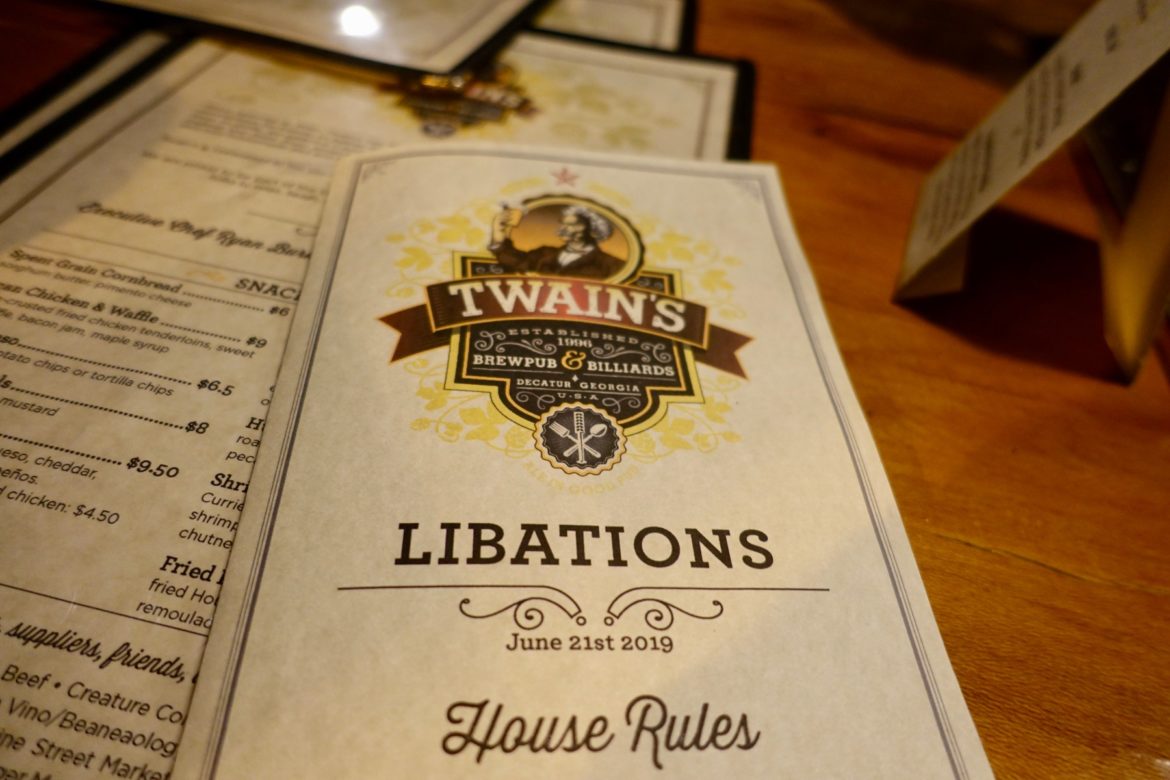 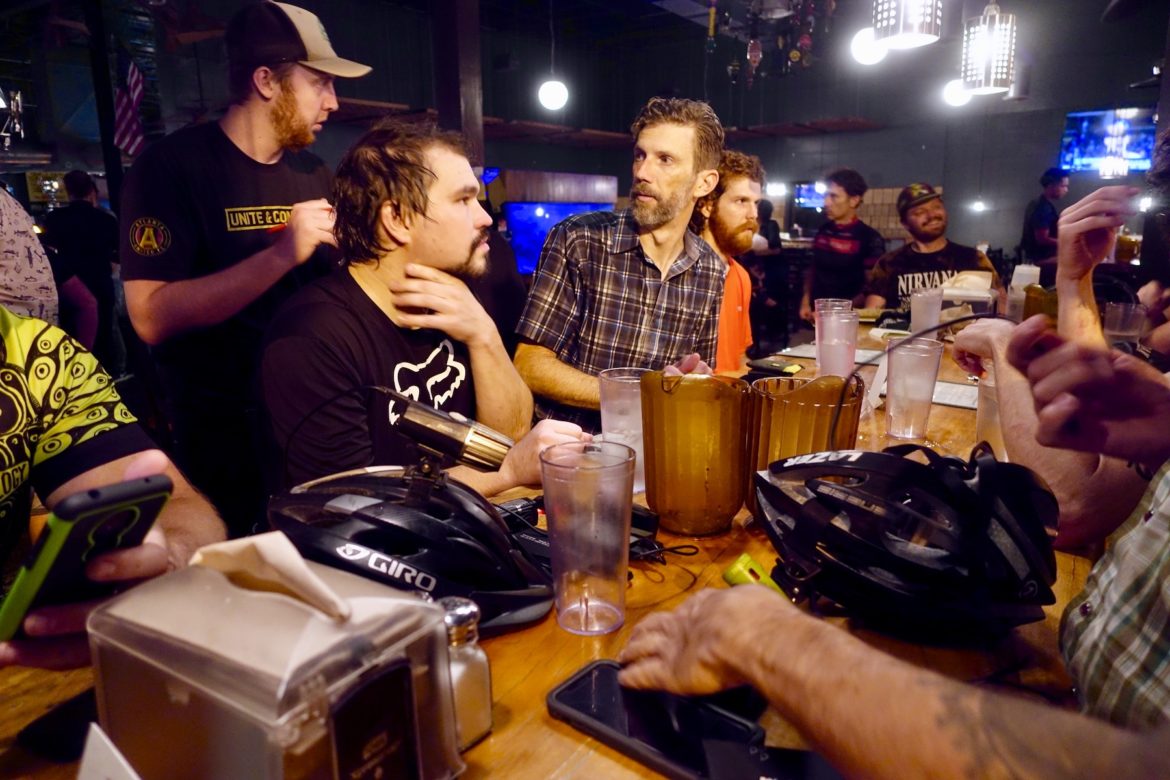 I break out my plug-in, USB charger while others use battery packs to recharge lights for the second half of the night. 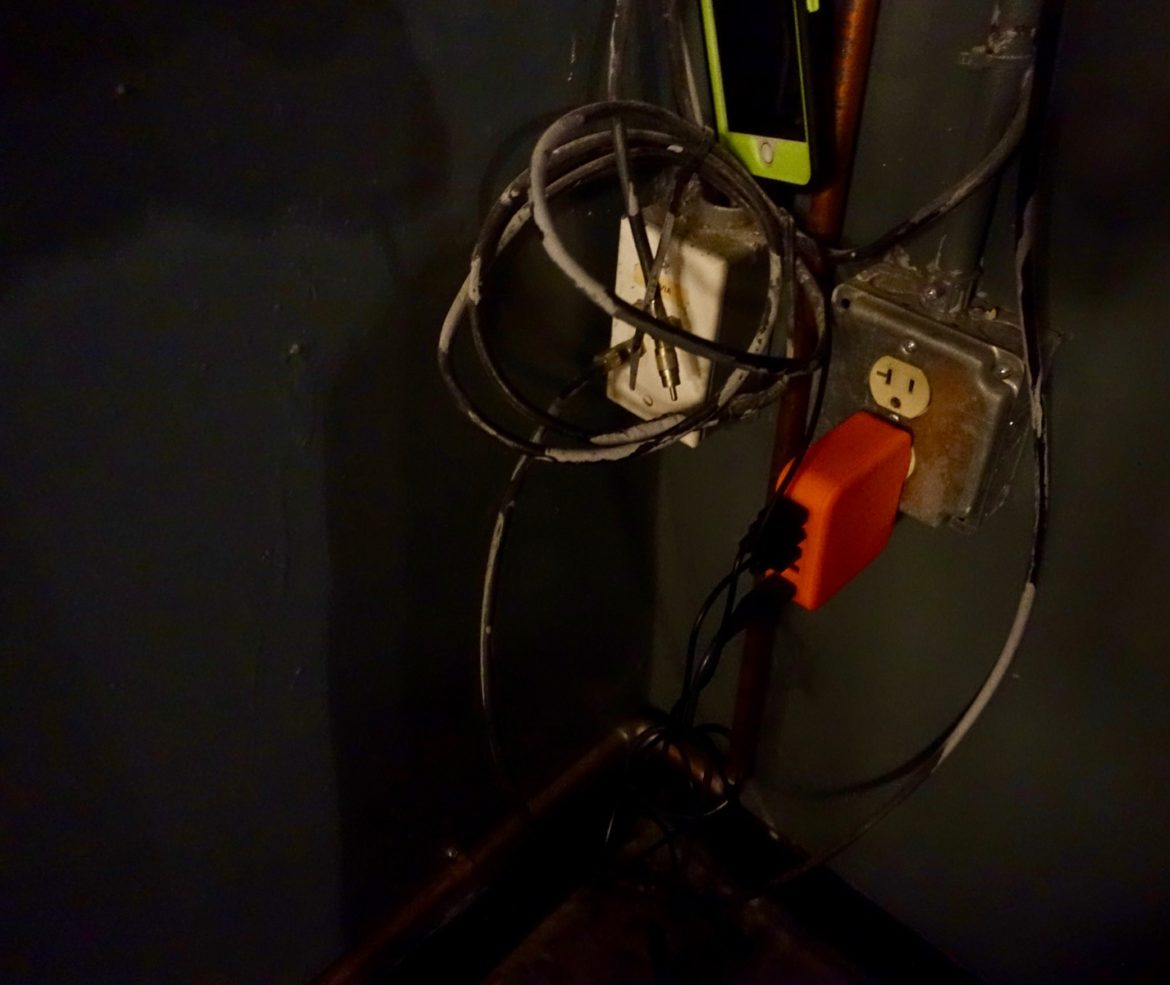 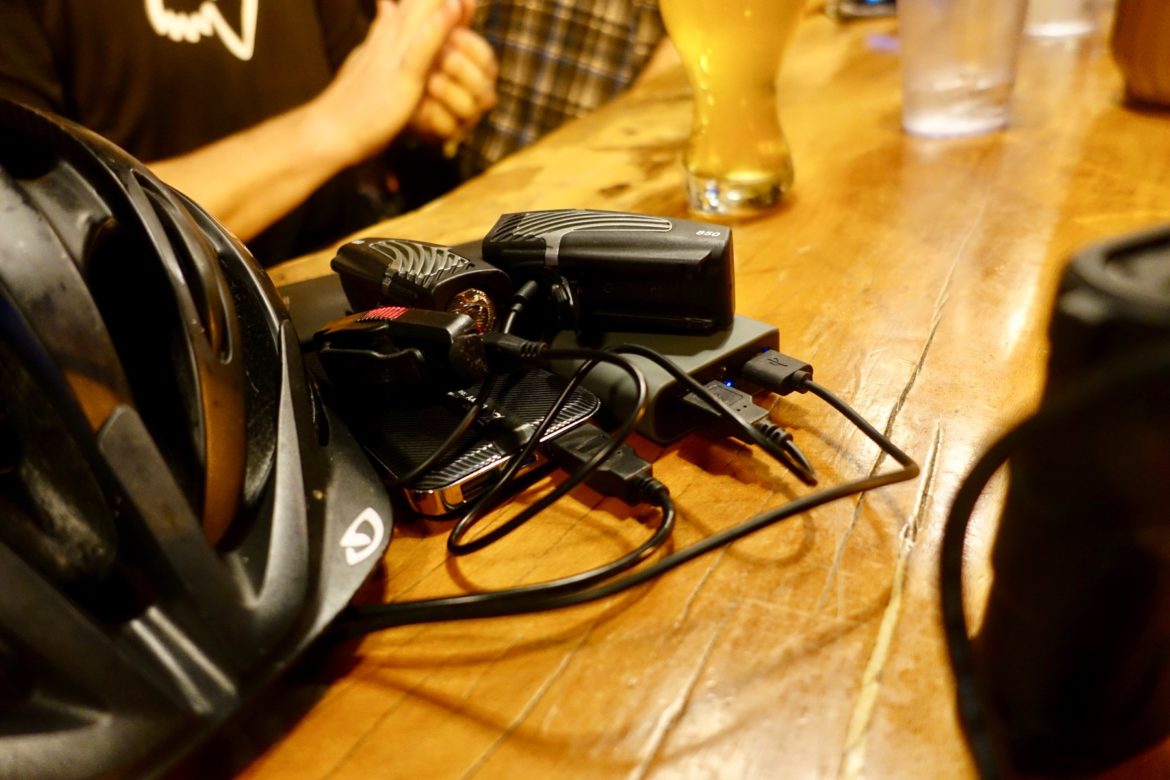 1:45a: The crowd starts to thin at Twain’s, and someone notices a weather warning for our area. The forecast predicted exactly 0% chance of rain overnight, yet now the radar is filled with a nasty blob or yellow, orange, and red heading our way, with 50mph wind gusts. Our guess is we’ll get hit around 3am, and while I’m not too concerned about getting wet, riding singletrack through the woods in high winds can be scary.

2:02a: The storm hits. Air temperatures seem to drop 20 degrees in a matter of minutes, signaling a strong front moving in. Big, plump rain drops spatter our arms and the wind whips the leafy boughs into a frenzy overhead. We catch a glimpse of the clouds through a clearing, and try to reckon which way the weather is heading. Then, as quickly as it arrives, the storm passes, leaving us dry save for our sweat.

2:37a: We pass a house with a medium-sized tree leaning onto a carport, and a man with a hand saw is furiously trying to dislodge the tree from his roof. Large branches block the road, evidence of the powerful winds that blew through minutes before.

2:58a: Three members of the group decide to call it a night, leaving the group at ten. My jersey, shorts, gloves, and socks are soaked from sweat. I’m wishing I brought an extra set of dry gloves right now. 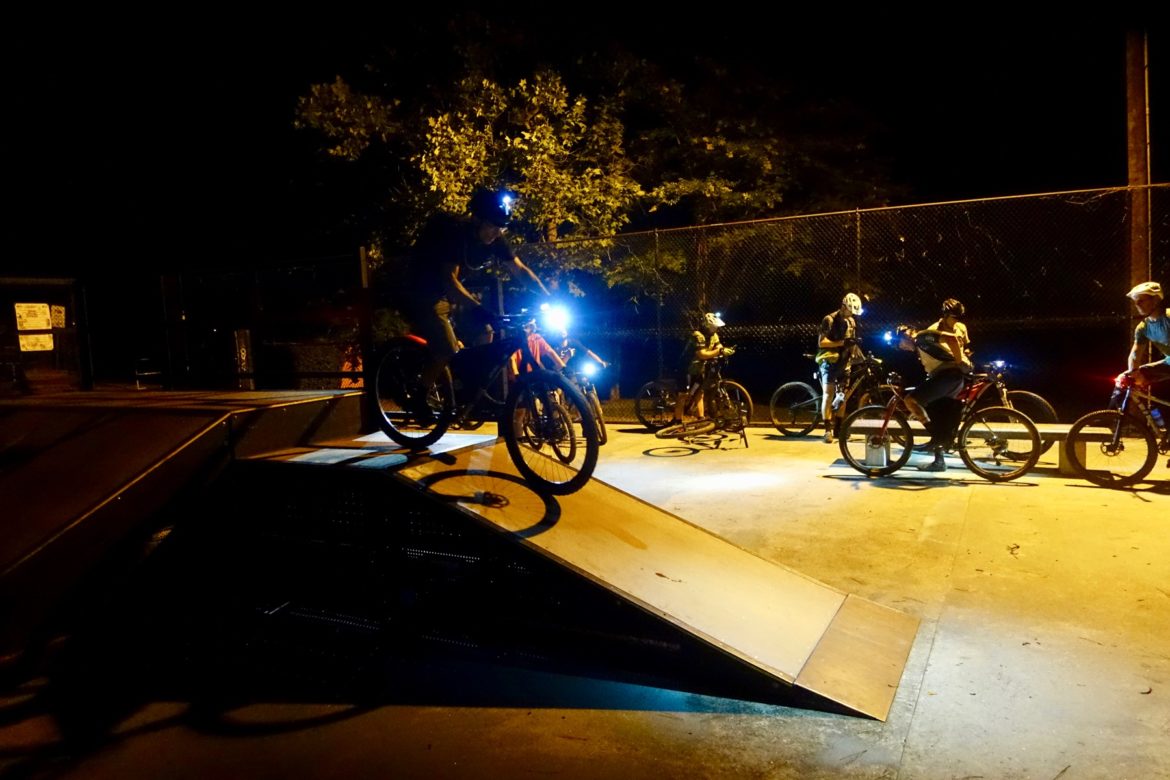 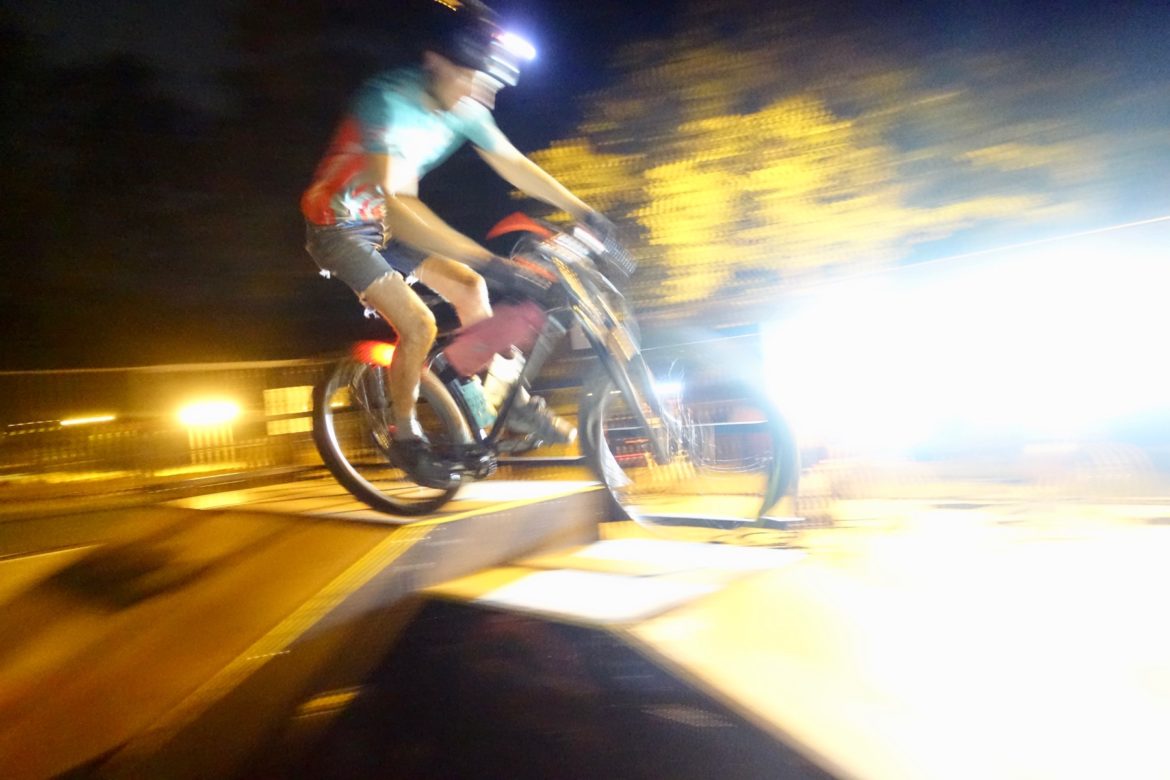 3:23a: We make it to the Candler Park neighborhood where our regular Tuesday night ride meets each week. Despite the hour, it feels like we’re starting our usual ride on the usual trails.

4:04a: Need coffee. There’s talk of stopping at a Waffle House, but they’re all too far away. Then we remember the nearby McDonald’s attached to a 24-hour gas station. Despite both the McDonalds and gas station advertising themselves as open all the time, both are currently closed for “cleaning.” The woman at the McDonalds drive-thru tells us to come back around 4:30 or 5am and they can serve us. New plan: head to another, larger gas station we know will be open. 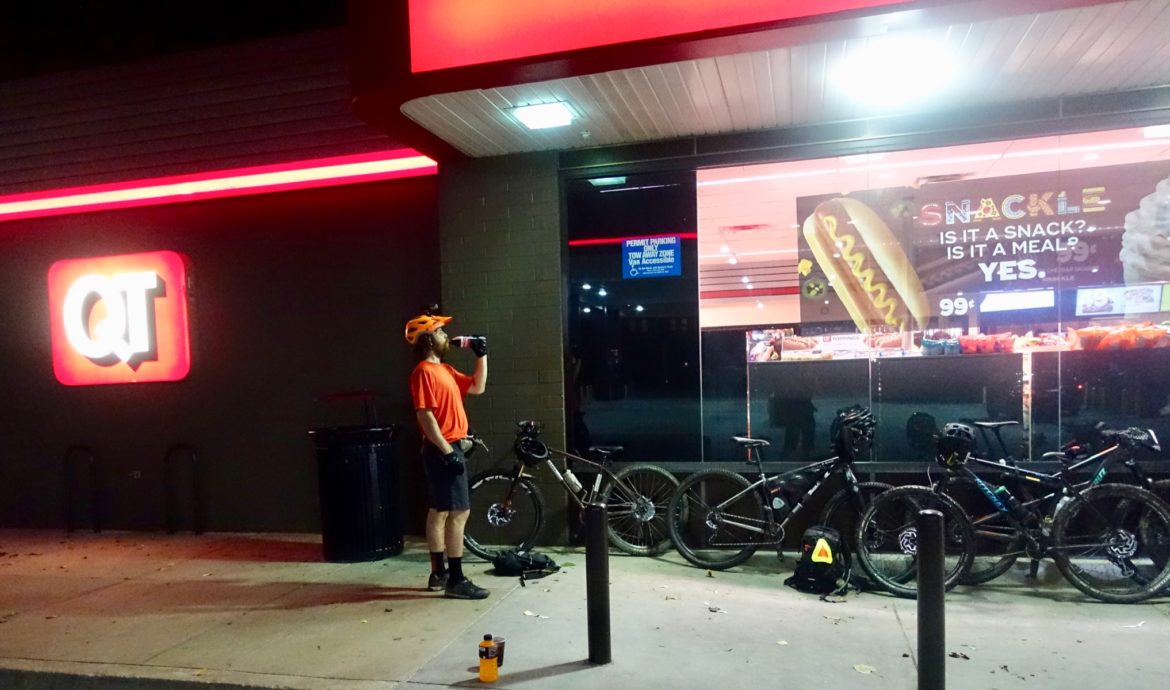 4:34a: Quick Trip is open for business. The buzzy, bright lights are disorienting and stepping into the store, I’m overwhelmed by choices. Should I get a donut, or a beer? Coffee, or Powerade? I decide to stick to liquids and buy a hot coffee and an orange Powerade. Brad slurps down a 20oz. Coke. No one seems to be in the mood for food. 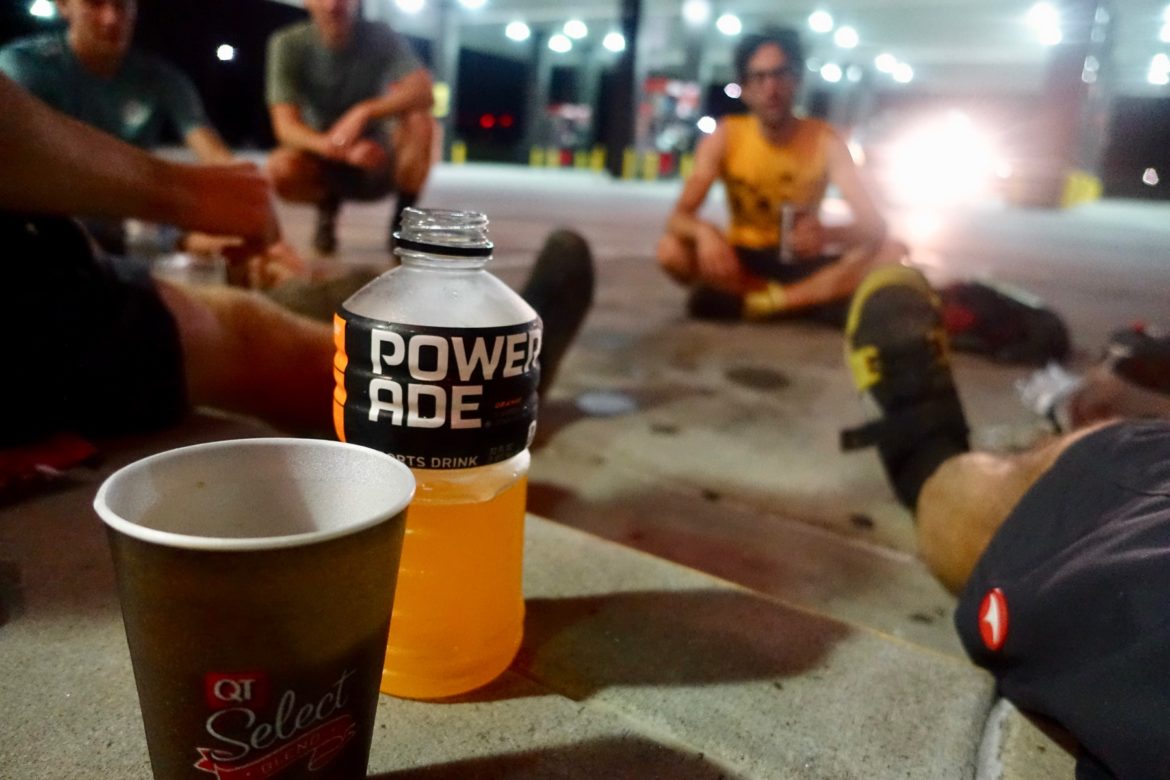 5:02a: Back on the hunt for singletrack. 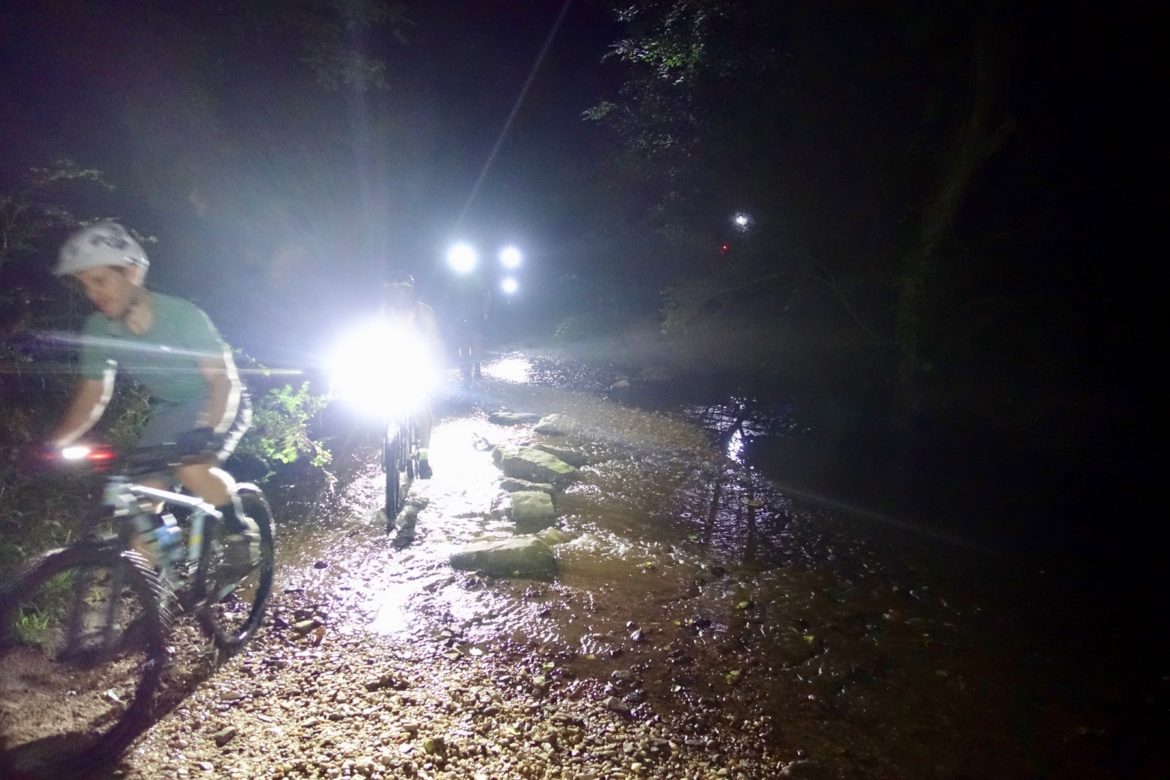 5:31a: The party is here. Someone must’ve had a kid’s birthday party in the park and decided to leave the decorations. After a quick spin through Shamrock, we hop onto the railroad tracks and head toward Mason Mill Park for a punishing singletrack finish. 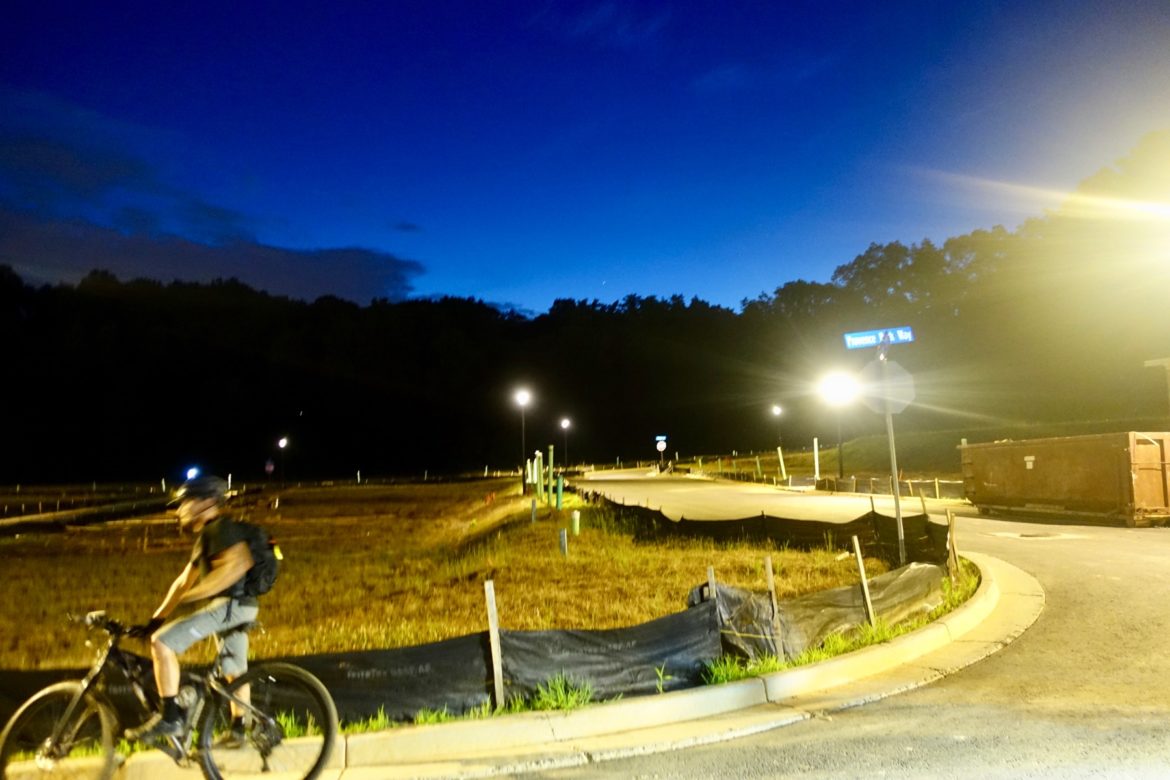 5:40a: As we hop off the tracks, we see first light breaking above the trees. It’s still almost an hour until the official sunrise. My Light & Motion handlebar light finally dies around this time, but the helmet light — which I charged for a bit at Twain’s — is still going strong. I’m pleasantly surprised I don’t need to swap lights during the night. 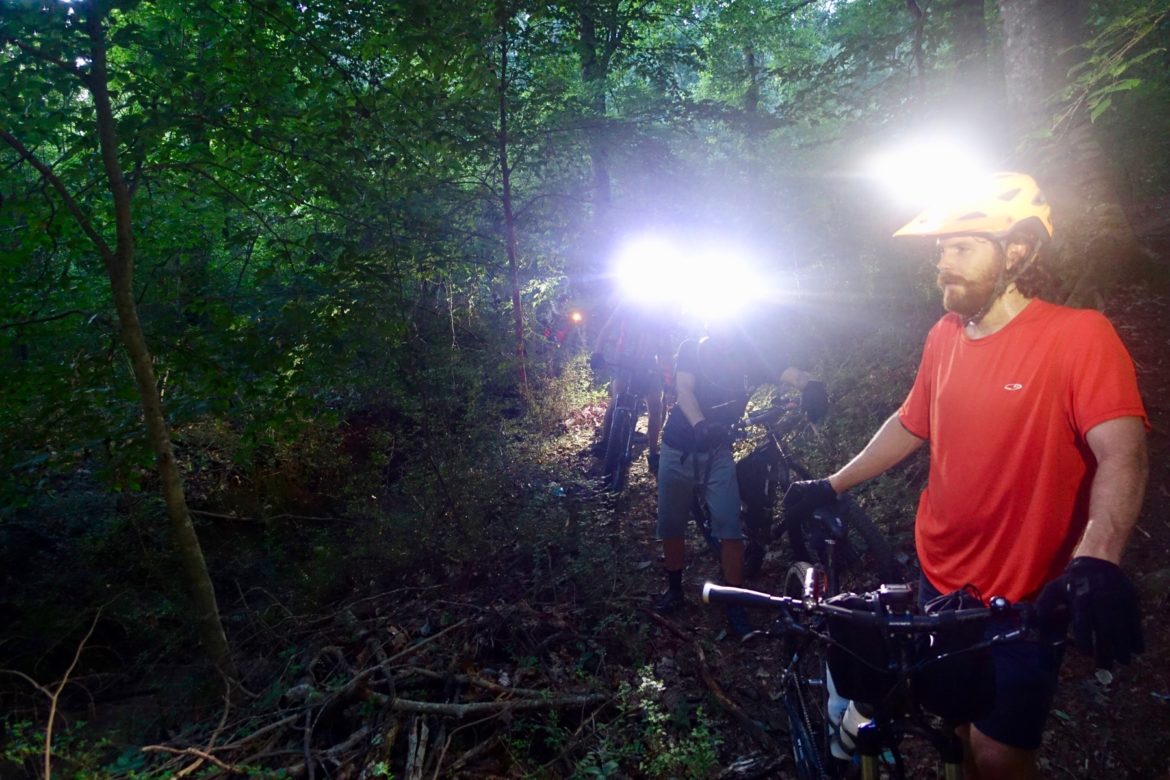 6:28a: Sunrise. The sky seems bright above us, but it’s still dark on the trail so we continue to burn our lights. We’re in the middle of a loop in Mason Mill we call the High Line, and rather than bail based on the clock, we press on to finish the loop.

6:40a: Emerge from the forest. Crossing the railroad tracks, we stop for a group photo with the sun at our backs. From here, the group splits and we each head for home.

7:32a: Arrive home. My Wahoo Elemnt says I rode ten and a half hours and covered 44 miles, which is a good bit shorter than I estimated. On a normal Tuesday night, we usually clock 20 miles or more in only two and a half hours. But with all night to ride, it turns out we aren’t in a hurry to get anywhere in particular. 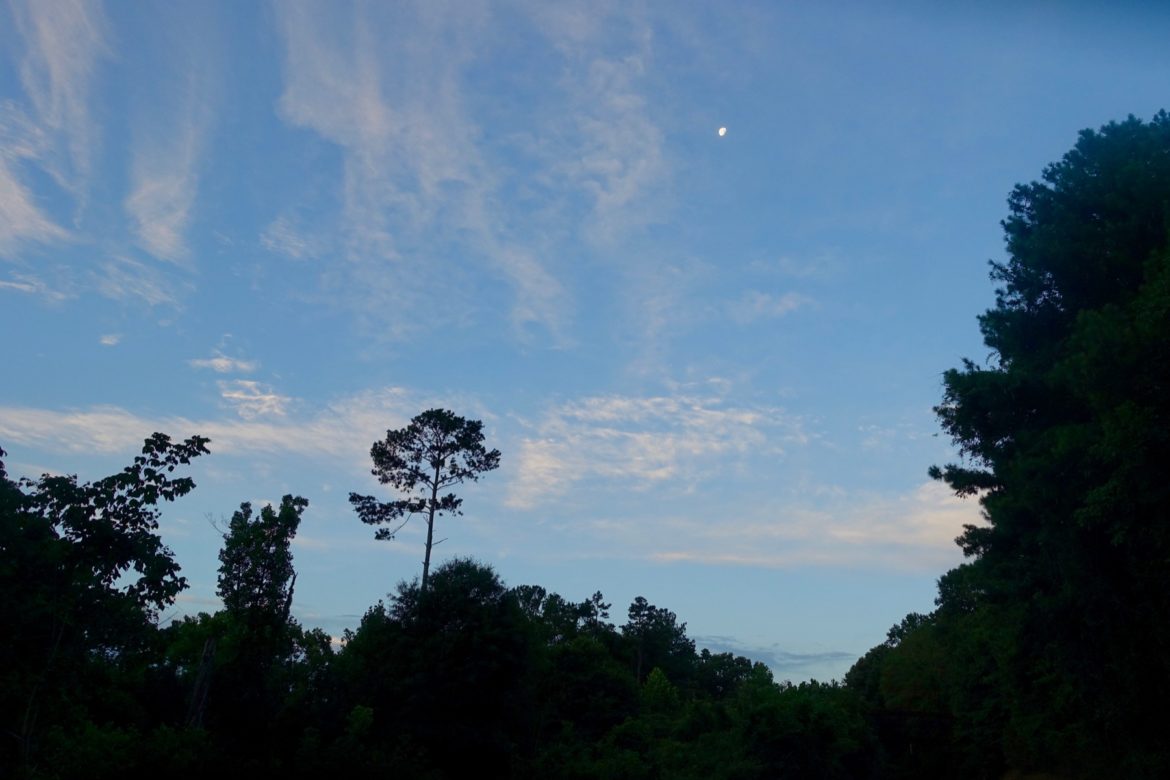 Mountain bikers everywhere seem to have their own way of celebrating the solstice. For me, this was my first time riding all night and also my first dawn patrol, and I’m glad to have experienced it on the shortest night of the year.

Now, it’s time to start planning a ride for the winter solstice…