After taking almost a year off of mountain biking due to the very long, sometimes taxing process of making another human being, I have started this season with much more resolve to get in better shape and to improve my technical ability. In years past, I have felt that any improvements were very minor and that there were, perhaps, fundamental flaws with my technique (see Exhibit A).

While I enjoyed mountain biking a great deal, almost every ride was comprised of (listed in increasing quantity): pure bliss, lung burning, cursing, fear of bodily injury, fear of death, and scrapes/bruises. In an effort to reverse the previous list, I sought out women’s mountain biking clinics. Stumbling upon the Beti AllRide Clinic, I peer-pressured a friend of mine to sign up for the clinic in Sedona with me.

Best decision EVER. Well, at least with regards to mountain biking. The husband and the kid do rank above it.

After spending half the day driving across the southwest, with absolutely nothing to look at except for a few random, surprisingly-plump cows, we finally found ourselves in Sedona shortly before the Friday evening social at Over the Edge Sports (OTE). Being intrinsically socially awkward in new social settings (think The Big Bang Theory), I strategically unloaded the car at our hotel to position a “fashionably” late arrival.

We were two of the first people to arrive at the social. After a lame attempt at being creative with my name plate (Exhibit B), snacking on the gourmet cheese, crackers and wine I can’t pronounce, I exchanged pleasantries with a few other women that signed up for this crazy clinic as well. Only they looked like the intense, full-face downhill mountain bike chicks I see in videos. And I? I looked like I was ready to go purchase a new pair of Birkenstocks from REI. I left the social with my arms over-flowing with swag and thinking maybe this wasn’t a great idea after all.

There are two options with this clinic, either one day (for $175) or two days ($295). In case you haven’t looked into mountain biking clinics, this is dirt cheap.

Saturday morning started with breakfast at Over the Edge. Over 30 women signed up for the clinic, but there was a spread of food enough for 50 men. To be quite honest, that’s how we ate as well. It was as if the coaches and staff were professionals in the business and knew how women stocked up prior to spending an entire day on the bike in the sun. I anticipated a light, continental-style breakfast, such as tea and crumpets, but it wasn’t even close to that: breakfast burritos with chorizo, bacon, and sausage that stick to the ribs, oatmeal with every amazing topping you could imagine, as well as enough Starbucks coffee to get even the most caffeine-depraved amongst us going.

After stuffing our faces–in the politest manner possible, of course–we made our way to a nearby park to begin the clinic. We started in a single group going over some of the basics of bike handling, complete with comedic demonstrations by the coaching staff. We then broke into smaller groups to work on the fundamentals in a large, open grass field. I was in one of the intermediate groups, led by Lindsey Voires (most famous person I’ve met). My personal goal for the clinic was to learn how to climb technical trails. I have encountered entirely too many trails while living in New Mexico that required me to push my bike uphill and, quite frankly, I have grown sick and tired of it. As we went round robin with introductions, it became clear that all of us wanted to improve on tackling rocky ascents.

We slowly built up the skills we would need to shred singletrack that afternoon. It didn’t take long for me to realize that I had fairly bad techniques for just about every aspect of mountain biking. Prior to the clinic, my techniques consisted of ramming obstacles like a bulldozer and hoping my 29″ wheels would make it over. As for technical descents, my personal favorite was just to lean back and hold on. The latter technique being one that just about every (good) male rider I had ridden with instructed me to do.

But the coaches started small and built up from there. We covered techniques from how to hold a straight line on 2×4 boards to wheel lifts and bunny hops. The coaches also didn’t disappoint with a myriad of obstacles to practice on: everything from boxes to simulate shelf-like rocks to even a teeter totter.

I felt like a kid in a playground. It’s amazing how much faster you learn how to do a wheelie lift over obstacles when there’s no fear of slamming your face against rocks or cacti. All these years I thought it was that kind of fear that helped you learn tricks faster! 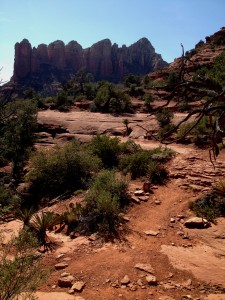 After stuffing ourselves yet again with gourmet food for lunch (these chicks know how to roll!), we struck out on the Soldiers Wash Trails. This is where I think the coaching staff did a phenomenal job: picking out trails that were tailored to the riders in the specific groups. It allowed us to translate skills taught in a very controlled environment to a setting where the knobbies hit the (sometimes very loose) dirt, lined with cacti and sharp rocks. The coaches were extremely patient, and even after just a morning session with us, were able to point out bad habits engrained in us after years of biking.

While we didn’t rack up a ton of miles that afternoon, we conquered a number of technical features that many of us (especially myself) wouldn’t have even attempted the day before. We stopped and sessioned key features along the trail to solidify good technique. I found it extremely beneficial to watch each of the girls tackle the terrain in their own way. Many times I learned by watching their lines and technique to see where I was going wrong.

After the biking festivities, we all reconvened at Over the Edge for happy hour sponsored by Deschutes Brewery (yes, that means there was free Deschutes beer!!) and an educational bike repair clinic given by Keep Making Circles, sponsored by Hero Kit.

Not only did we get a superb crash course on bike maintenance and how to fix our bikes while on the trail sans men, there were a ton of goodies given away during the event, ranging from t-shirts and koozies to iceDot crash sensors.

Overall, Day 1 was entirely more successful and enjoyable than I had expected, or even hoped for. Stay tuned for Part 2 tomorrow!

Great article! I have been hoping to do a similar skills clinic for guys–and am looking forward to a pro lesson coming up soon.

Were there different levels of riders, or just one group?

There were four groups that covered the entire spectrum of riders. From brand spanking new to the super advanced.

Awesome write up! Sounds like you found a really great clinic. Can’t wait to read part 2!

Thanks! It was fantastic. I highly recommend it!