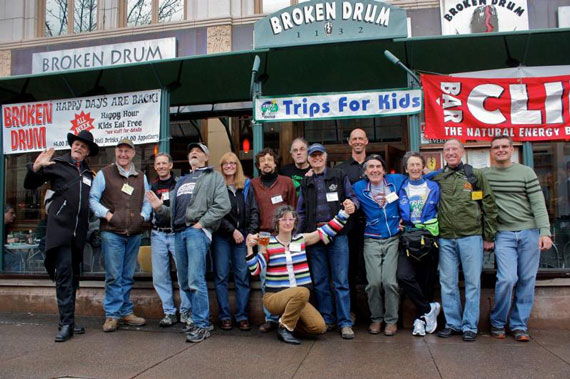 The press release we read said $3,000 was raised for this national non-profit which seems like a paltry amount for an event with such celebrity fire-power. Not only that, the $3,000 came from drink sales and a silent auction that included at least two brand new mountain bikes (a FS from Jamis and a 29er from Marin). Heck, we’re pretty sure the MTB legends themselves would have no problem running up a $3,000 bar tab in one night 🙂

For those who don’t know, Trips for Kids is a nonprofit 501(c)3 organization that “opens the world of cycling to at-risk youth through mountain bike rides and Earn-A-Bike programs.” TFK is based in Marin County, CA and was founded in 1998 by MTB Hall-of-Famer Marilyn Price.

So to answer the question at the beginning of this article, I’d probably be willing to pay a hundred bucks to have a beer with the guys next year. If just 30 others were willing to do the same, TFK could easily beat this year’s haul!

If cold beverages, a little food, and a chance to win a bike were all rolled together with the opportunity to meet & greet with those legends…Count me in for at least $250.00.

Yea I agree! I dont even drink but would be in for at least $100.
Perhaps a little advertisment and pre-planning would be a good thing next year.
Im sure there are plenty of other fund raising events/technics used by the TFK, and $3000 is no laughing matter but it does seem like this could have gone over a lot better.

It is great to read articles like this and realize what strong support Trips for Kids has in the mountain biking community. Thank you for your wonderful thoughts and suggestions for the Brews, Bikes and Bucks party. We started this event more than a decade ago to be a fun, casual party where our volunteers, supporters and the mountain bike pioneers could get together and celebrate mountain biking. It’s our way of saying “thank you” to all the great people that have supported us throughout the years. Most who attended give us a “thank you” right back by purchasing raffle tickets and drinks and participating in the silent auction.

All of your suggestions, though, have made us consider how we might be able to make Brews, Bikes and Bucks into a fundraising event and give locals a chance to mingle with the pioneers of mountain biking. Please keep up with the TFK happenings on Facebook and Twitter (twitter.com/tripsforkids)