Syncros offers their FR wheelset to the DH/Freeride crowd as a high quality wheelset for a reasonable price. Back in the spring I previewed this wheelset so if you missed it or want to check out the specs, click here. Many of the top riders on the North Shore ride these wheels so I was excited to test them out for myself. My tests took place on the toughest, roughest trails in Whistler, on the North Shore and in Kelowna.

The first thing you notice about these wheels is their distinctive styling – the white really pops out on the trail and in pictures and sets your bike apart from the rest. But as soon as you saddle up, what you’ll really appreciate is that the bearings roll fast and the hubs are smooth – and they remained so through the duration of my tests.

I tested these wheels under the most extreme conditions possible, mounting them on my Banshee Legend MKII and pounding them mercilessly on the rough, rock strewn, jump infested trails around Vancouver, British Columbia. I have a plow through anything mentality and at 63, 195 lbs, my equipment takes far more abuse than the average rider dishes out. Given the extreme nature of the testing, the Syncros FR wheels held up fairly well.

I did my best to destroy these wheels. I rode them down steep rock faces, big jumps, rough landings and rock strewn race courses. They sustained some damage during testing but never catastrophically failed. 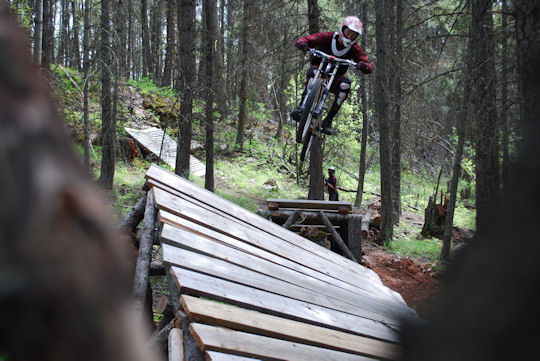 The front wheel still runs straight and true after 3 months of testing and only 1 spoke needed re-tensioning. Rear wheels always take more punishment than the front and this showed during testing. My first flat spot occurred early on but after tightening the spokes and straightening the rim, the wheel was good to good go for another month until I encountered a particularly nasty race course that resembled a dry riverbed. That trail, combined with a few more weeks on the shore and in Whistler, caused a couple more flat spots in the rear rim. By then the rim was pretty haggared and the flat spots caused the spokes to loosen prematurely. 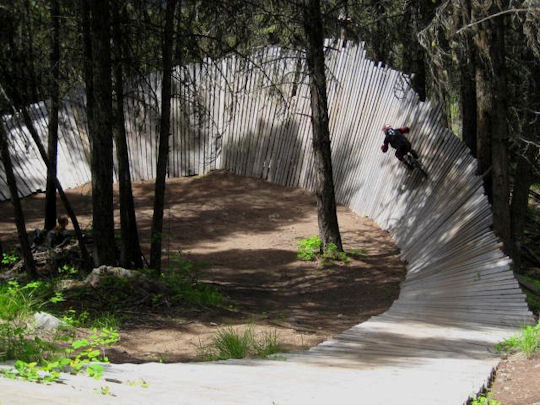 The largest flat spot occurred at the seam which is pinned with no welding like some more robust wheels on the market. Welding the seam instead of just using sleeves would greatly increase the strength of this rim (but the trade-off is this would probably increase the price). That being said, I put these wheels through hell and they held up better than many other wheels Ive tested. 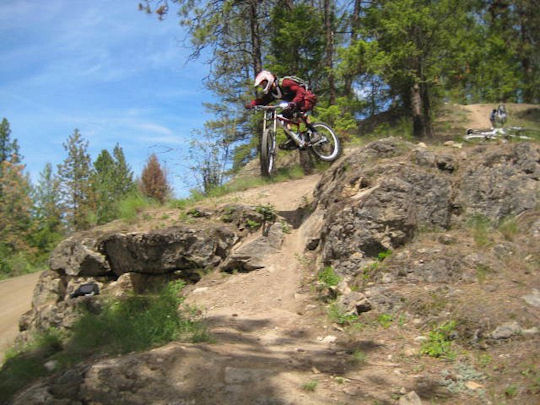 If youre looking for a relatively strong, middle-weight DH wheelset that wont break the bank, consider the Syncros FR wheels. They arent nukeproof but will be plenty strong for the average downhiller or freerider. As long as youre not casing lots of jumps or mindlessly plowing into rock gardens, these wheels should last a solid season or more.

Thanks to Syncros for providing these wheels for testing.

I’m confused. Is that a positive review or a negative review? You said they broke on you but they’re good.

Sounds like they were good for the money, but I didn’t see the price listed anywhere.

Based on your pics, I know I won’t be doing anything nearly that gnarly so I’m guessing the wheels should hold up fine for me. 🙂

What BTB was saying that the Syncros FR wheels worked great…This extended review was for the entire 2010 season of riding in BC. Saying that. BTB is an extreme freerider. Most of the people out there would not be doing what he does. I know him personally and rode with him for a while. Regularly BTB will do 20ft gaps and drops of over 15ft…That is a tremendous amount of abuse a set of wheels take. Also he said he bent them…When you come off a big drop onto rocks and such and case it (in otherwords crash) not many things come out straight any more. Including yourself 🙂

The scores are in! Element got a perfect 10!!

Exactly what Element posted! That was BTB’s conclusion after abusing them to beyond their limits and plus more. As a person that also does bigger drops with gaps, I understand exactly where BTB is coming from in his review. I have a friend that beats the hell out of that same exact wheels-set, and they are tough and taken a thrashing. They would far serve their purpose twice over for riders wanting a stronger wheel without the high price tag, though not too many wheels would survive the brutal punishment that Element mentioned above. I personally like a lot of Syncros parts, though I am not a brand junkie, but they make great products for the FR and DH realm of MTB’ing.