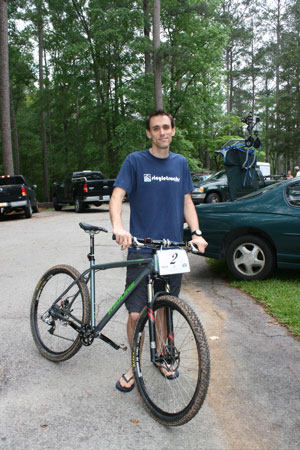 This weekend I rode the Sumter Metric Century, a 62 mile mountain bike race through the Sumter National Forest in South Carolina, home to some of the best singletrack the southeast has to offer. Despite mostly overcast skies and occasional rain showers throughout the day I had a blast reconnecting with some of the very first mountain bike trails I ever rode.

The “low key” race started at Lick Fork Recreation Area with a LeMans style start (no gun) and covered about 5 miles of singletrack before heading out of the park. After a little paved and gravel road riding we hit the first sag stop and jumped onto the Wine Creek and Turkey Creek trails for 12 miles of uninterupted singletrack riding. By the second sag stop we were more than halfway through and I felt great. 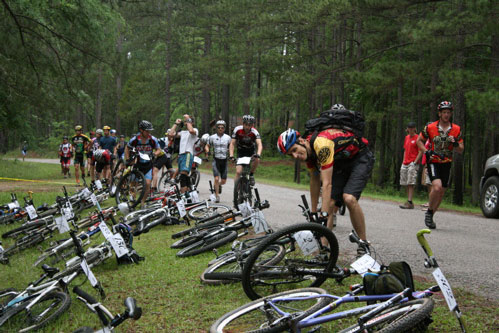 More paved and gravel roads led to the Stevens Creek (Modoc) trail and the final singletrack portion of the ride. About 2 miles into the trail (mile 44 or so and 4 miles from the end of the singletrack) the trail crosses a wooden bridge (one of dozens along the course) where someone placed a pile of sticks at the start of the bridge as a warning. Since the creek was about 6-8 feet below and the banks were nearly vertical I decided to carefully walk my bike across the slimy, twisted bridge rather than try to ford the stream.

About 2/3 of the way across the bridge I started to slip into the creek. As I was sliding I prepared myself to jump into the creek but at the last second I somehow regained my footing. I inched a bit further toward the end and grabbed onto a tree. With less than 3 feet to go I felt confident with a firm grip on the tree trunk when – WHAM – I was on the deck on top of my bike! I grabbed the high edge of the bridge decking, swung my legs to the bank, and slid my bike and body onto terra firma.

Somehow I avoided serious injury to myself but my bike didn’t fare quite as well. I fell on top of the bike with the derailleur side down, bending the derailleur AND several spokes on my rear wheel. The wheel was so bent it was nearly rubbing the frame with each revolution but I was able to make it 4 miles to the final sag stop.

At the sag one of the volunteers ghetto-trued my wheel by banging the rim on the asphalt and off I went for the final 16 miles to the finish with a wobbly rear wheel and just 3 usuable gears. I finished in 6 hours, 6 minutes which was a bit of a bummer (I was hoping for sub-6 hours) but in the end I was stoked to make it to the finish where there were burgers and hot dogs on the grill. 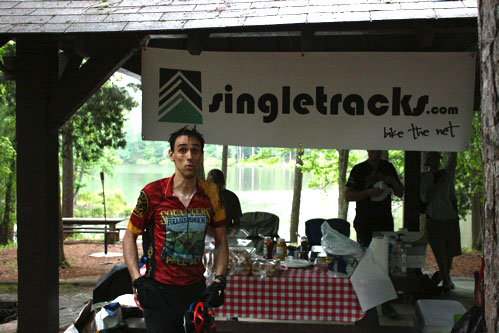 I don’t look tired, do I? I’m pretty sure I lost 10 pounds of water on the ride!

In the end we rode 24 miles of singletrack and climbed more than 3,500 feet (much more climbing than I originally estimated). It was great seeing brianW and seenvic there (ask him about his fall on 4-mile bridge) along with all the riders and volunteers who made the ride a success. 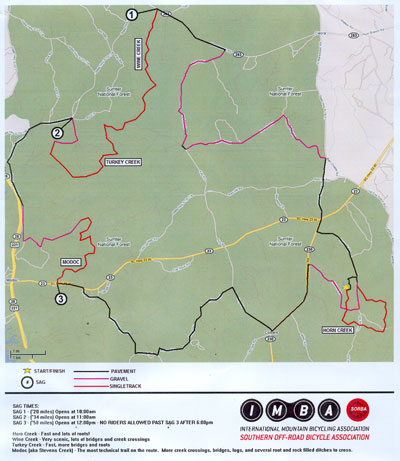 If you’ve never ridden in the Sumter National Forest I highly recommend getting out there this summer. With nearly a dozen singletrack trails within a 50 mile radius including the IMBA Epic FATS trail, you’re sure to have a blast. In fact, rumor has it that IMBA is considering Augusta, GA for the 2009 World Summit thanks to all the hard work SORBA is doing in the area. What are you waiting for?

Jeff, that’s freaking cool. And that picutre is CLASSIC! Congrats! And hey, think “glass half full” – you may not have made the time you wanted, but… YOU RODE 62 MILES. That ain’t shabby!

Congratulations bro! Sounds like you had an exciting journey my friend. BTW, love your set up at the end of the race with that whopper Singletracks.com banner.

Great to meet you, Jeff. Glad we could ride together for a while on Turkey Creek.

I had a blast. Rode with a sorts of people from all over the SE.

I bet this thing becomes and annual event. I think the folks here liked it and from what I can tell so far, the volunteers enjoyed putting it on.

All I can say is sweet, and glad that you guys made it out with no injuries of course.

Right on! Congradulations!
Sounds like a day you wont soon forget.
Love the ghetto fixes, hell some of mine last longer than the official repairs, go figure…

Way to go Jeff, I am looking forward to hearing more about it, I would of love to been there to cheer you on. Nice banner too!

Congrats on the ride, glad you made it….Even clawing yourself back on a bike after an off too…Good for you!