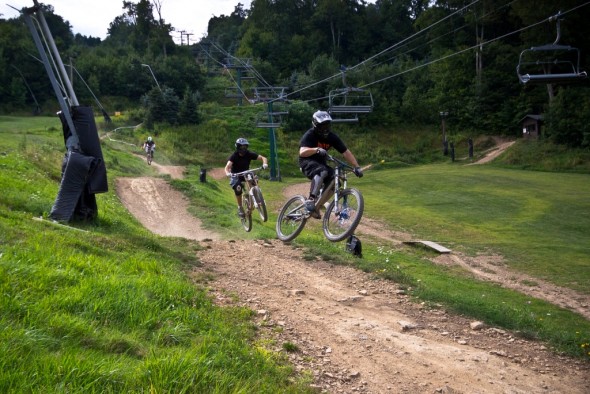 A few weeks back I had a chance to go on a road trip down to Seven Springs in Pennsylvania with my buddies. I was so stoked to pack up the gear and take that 7-hour drive from my home to Seven Springs, especially since I didn’t have to drive my car. Packing up the gear in my buddy’s pick-up took a bit of time but we had to make sure nothing moved (a lot of damage could occur just during transportation). So in the end with all the spares (shocks, springs, cranks, cables, nuts, bolts, brakes, and any other part you could possibly think of), tools, bikes (spare ride included), armor, clothing, and food, you can see that the truck got pretty full. 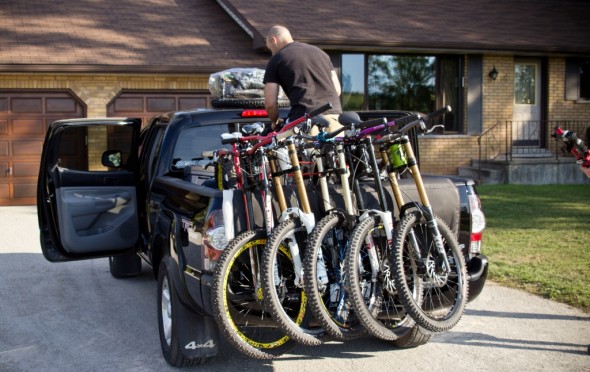 From Toronto the trip to to the Super 8 near Seven Springs took about 8 hours including various “scheduled” stops. Needless to say, we were baked at the end of the day. We still had to unpack the truck and basically sleep with our gear. I don’t know about you but $30,000 worth of gear open for all to see is a bit too much of a temptation. So that hour was spent for good measure. Of course after a long ride we were tired but still stoked because the next morning we knew we’d be out hitting the slopes. There was another hour or two of chatting it up and watching bike videos until finally the Red Bull / Monster concoction that we had on the drive down wore off. 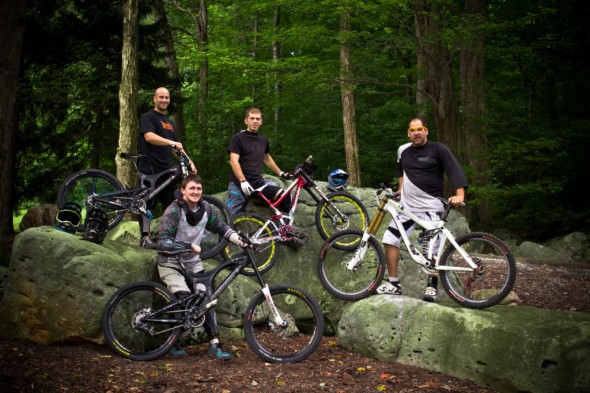 Arriving at Seven Springs there was the obligatory buddy shot (*tip* take camera shots before you hit the slopes, things tend to break soon after), on the rocks which I almost overlooked; fortunately my buddy Jay saw the shot. This is where a good camera, proper lighting, and a tripod come in handy. It took a bit of running and setting up white balance as well as proper exposure to get this shot but it did turn out well. For this shot I used a 24-70 lens with a f2.8 minimum aperture. I had fun taking the shot and playing around on the computer to change up the look of the shot. 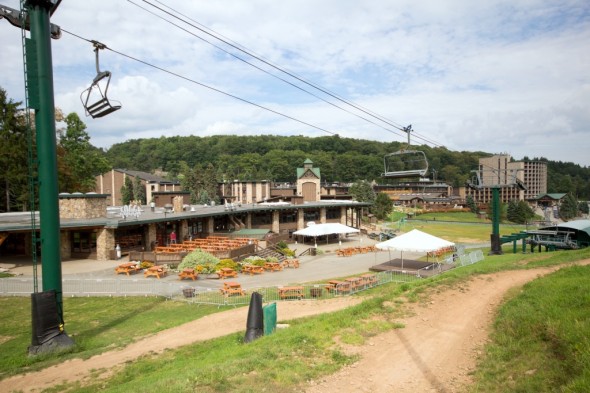 Seven Springs offers a good mix of slopes to ride, from easy blue dot trails (007) to more complex and techy diamond and double-diamond runs (Frankenstein and EC1 – upper and lower). In fact the DH runs were so much fun I found it hard to stop and get my camera out to take pics. On the second day of our trip I hung out on the collector a bit and took some shots of my friends and some other folks clearing the awesome 25ft tables. 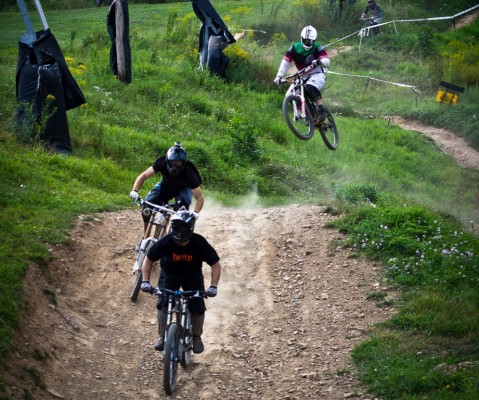 The slopes offer good vantage points for taking great shots, especially with a fast lens like a 24-70 f2.8 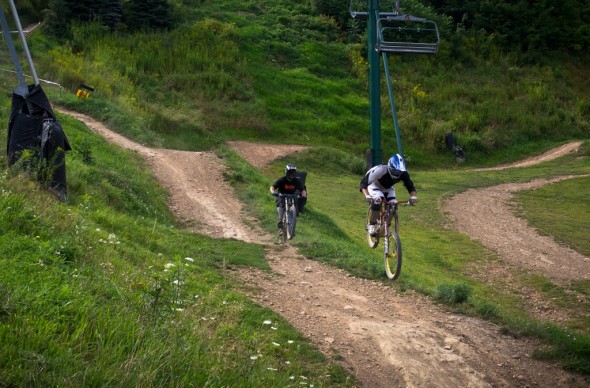 The next shot is of my two riding buddies just playing in the air – with a table top jump you get a lot of hang time. It’s almost enough time to start thinking about life. The funny thing about the tables at Seven Spring is the first few times the kicker tends to buck you slightly forward. But once you got used to it you were in for a lot of fun! 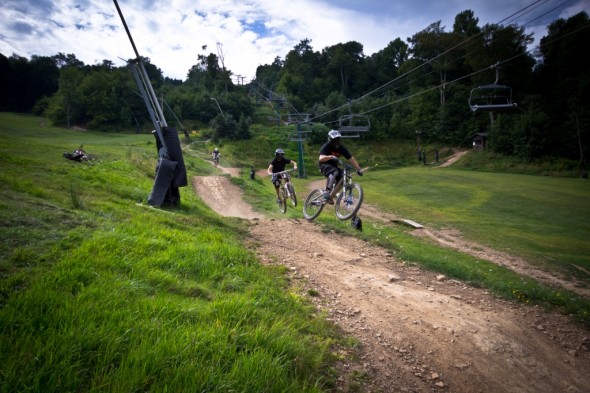 At the top of the slopes at Seven Springs there are some great trail features. The Burner line has three back-to-back features which, when hit properly, are super smooth. You come in and hit a step down wooden drop, followed by a rainbow bridge about 6ft+ high in the air, and then hit a picnic bench jump. Once you land that you have a super smooth wooden berm which then merges you into trail EC1 (upper). Lots of fun.

On the lower section of EC1 there is a mandatory roll-over drop into a quick right hand berm which will make most people think twice. I did hit it and made it but it was one of those features that I had to say OK, did it, not doing it again. A bit sketchy but that’s part of the charm. I do have to give props to the trial builders at Seven Springs as they really did a great job at using what they had. With limited elevation they still managed to make some sweet fast runs. The wood-to-wood features were all well built and flowy.

Now the only thing that bothered me a bit was the shuttle up; there is a lift but only on the weekends and only when there are enough riders to turn it on. The trailer, in my opinion, did not have enough padding to keep the bikes safe. On one of my bikes the brake line was bashed hard enough to crack the inner liner and cause it to leak. They did offer to refund my money but I was more interested in getting a new line and riding. Luckily we had spare parts with us and ended up fixing the bike ourselves and continued on the day.

Lift passes cost about $30 Mon- Thurs and $35 from Fri- Sun. There are DH bikes and equipment you can rent at the resort – $85 for the full day rental on the bikes and $25 for the armor package. The bikes were Jamis BAM’s from what I saw displayed. As far as looking good, the retail side sells Oakley, Fox and Dakine gear at a decent price too.

If you’re in the area, check out Seven Springs and consider bringing the family along. Visit their website for more details on biking and other summer activities.

Gear
Why are Good Rain Jackets so Expensive? We had to...
Gear
Best Mountain Bike Gifts Under $50
Progression
How to Stay Strong in the Off-Season, Even if You're...
Gear
13 Reliable, High-Quality Mountain Bike Products Designed to Last
Subscribe
Login
Please login to comment
9 Comments
Most Voted
Newest Oldest
Inline Feedbacks
View all comments

Those are great pics – really love the action shots.

You know you’re a serious mountain biker when you bring more bikes than riders for a trip. Epic!

Yeah we didn’t want to break down…In the end out of four riders we did consume. 2 tires, shifter cable, brake line, bike change (damaged rear wheel), two tubes (on the bike that had them) and a pad change. Fun times!

Me and my friends go there as much as possible in the summer months, only 2 hours from us and we love it.. We aren’t the great avid DH guys, but after going for the first time last year we all had so much fun we all went out and bought or built All Mountain bikes just for the purpose of going there.. Heading up there this Wednesday, CANT WAIT

I’m still trying to make the connection of how this is Interbike news? 😀

Four guys jacked up on Monster and Redbull I am surprised that was all that broke….I guess the fact that no one really cased any features accounts to the low breakage.

Yeah great times for sure…I even like the clean up time….I think we were better set up than the shop area..