I did my first ever cross country (XC) mountain bike race recently. I’ve done a bunch of longer distance endurance races (6hr, 50 mile, 100k’s, etc) and a few short time trials, but this was my first mass-start, short distance, high intensity race. It was crazy! It was both frustrating and fun at the same time, and I can see how people get addicted to it. I learned a lot that day, so read on to hear how my race went and to see if XC racing is something you might enjoy yourself. 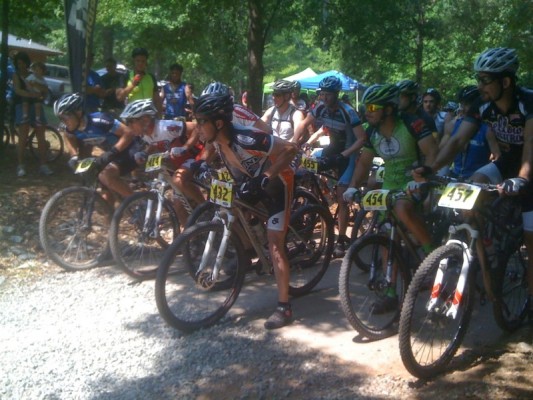 The SS class seemed to be the most eager to start. 432 even false started!

The Race and Course

The race was put on by Gone Riding and was a dual-series race for the South East Regional Championship and the Georgia State Championship. The course was a flatish rooty and rocky 10.5 mile loop at Dauset Nature Trails in Jackson, GA. There was only about 900ft of climbing per lap, but there were tons of roots and way more rocks than you would expect to find in middle Georgia. It was a rough course, but the conditions were hard packed and fast. There were 3 classes: Base (XC3) Sport (XC2) and Expert/Pro (XC1). Base did one lap, Sport did 2, and Expert did 3. Everything I read suggested first timers race in the Base class, so that’s exactly what I did, in the 19-29 age category.

I knew the pace would be fast the whole time, so for about 15 minutes before we started I rode up and down a long mellow gravel road climb. I pedaled an easy high cadence at first, then did some sprinting to send my heart rate up to redline a few times. I arrived at the start line, heart rate up and already sweating,just minutes before we went off. There were 8 of us in my class, and no one looked slow.

No really – GO!!! As soon as they said “go” it was a full out 100% effort sprint. We had about a quarter of a mile on a gravel road before we entered the singletrack. Almost immediately two guys somehow got tangled up and crashed hard at what had to be close to 20mph. I entered the singletrack at the back of the now 6 person pack. The pace never slowed down – it was fast, aggressive riding the entire race. Balls to the wall, hard as you can go. If you don’t feel like you might puke, you’re not trying hard enough. After a mile or so I made a pass and moved up to 5th, and kept pushing myself. 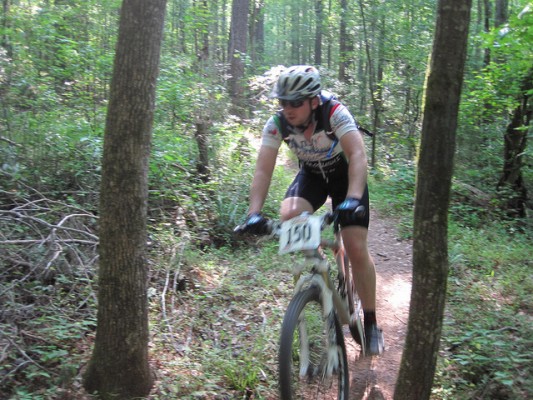 Me booking it through the woods. Be mindful of the trees! Photo: Mark D.

Around the4 mile mark I had almost reeled in the two riders ahead of me – I was close enough they weren’t getting out of sight anymore. Then on a rough climb I downshifted without easing up on the pedals. This is when I learned my upper limit screw on the rear derailleur was out of adjustment – the chain jumped past the big cog and got jammed between the spokes and cassette. I had to stop. The guys in front of me quickly disappeared, and the 3 behind me flew past. Before I could get the chain free some of the racers in the wave that started after my class had also caught and passed me, including my friend Chris. 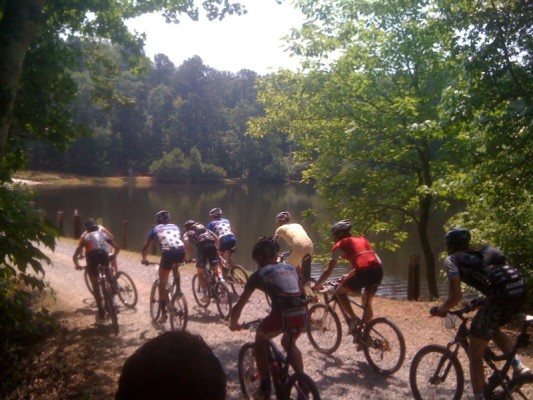 One of the Pro classes tearing out of the start line.

Once I got the chain free I took off in earnest, trying as hard as I could to catch back up. At a switchback there was another crash and I caught my friend Chris and a few other guys. Chris isn’t slow, so I tried tostay on his wheel. A short while later I passed Chris when he was in the wrong gear on a rocky climb. He caught back up to me pretty quickly, but didn’ttry to pass. Knowing he was behind memade me push even harder. Around 7.5 miles into the lap we catch a group of four racers, then my chain gets stuck between the cassette and spokes again.

This time it’s really stuck good, and I end up literally sitting on the ground next to the trail pulling and tugging on the chain trying to get it free. A ton of people pass me. There’s no way I can catch anyone in my class at this point: my race is over. After what feels like an eternity a course volunteer/photographer comes down the hill and helps me get the chain free. I finished the lap at a decent pace, but not nearly as hard as I was riding before. No point in killing myself now. A few minutes after I finish I hit the stop button on my heart rate monitor. One hour and nine minutes on the clock, average heartrate of 181 bpm and a max of 206 bpm. I told you it was full out! 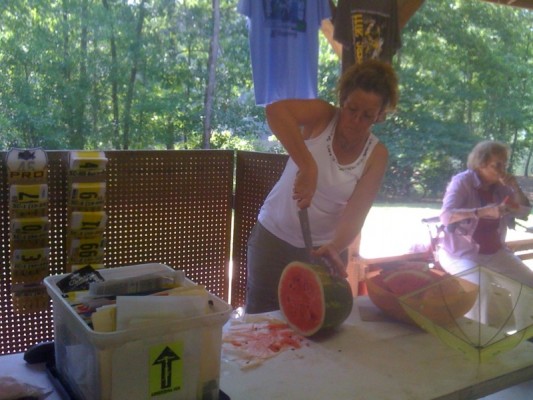 Post-race watermelon really hits the spot on a 90 degree day.

The biggest lesson I took away from the race is that perfect bike set up is critical. I had nearly 200 miles on that bike since building it up with no issues, but the race was the first time I rode it that hard – basically with reckless abandon. Shifting while cranking as hard as possible on the pedals will show any imperfections in your set up!

Some other advice for those of you interested in trying an XC race: 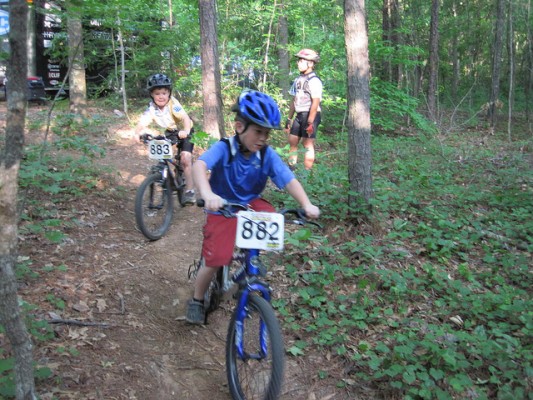 …it was a fun day, even though I was dead last in my class. The atmosphere was much more laid back and relaxed than I expected. Everyone was friendly and there to have fun. I also thought the kids race was cool – get ’em hooked young! The only thing I didn’t like was the drive-time to race-time ratio – I spent about 5hrs in the car and only about 50minutes riding. I probably wont do another one until I can combine it with a trip to visit friends or family. I can’t wait to try another XC race though!

Gear
These Bikes are Lightweight, Affordable, and Made for HS Mountain...
Gear
The Marin El Roy Hardtail is Very Slack, But it's...
Community
Kate Leeming on Exploring the Planet by Mountain Bike
Gear
Our Most Popular MTB Product Reviews of the Year
Subscribe
Login
Please login to comment
17 Comments
Most Voted
Newest Oldest
Inline Feedbacks
View all comments

The problem with your chain reminded me of a problem I had on a ride a few weeks ago. Got a piece of barbed wire wedged between my spokes & cassette so tight it turned my bike into a fixie. Even with pliers (thank goodness ckdake had a fancy multi-tool with him!) it was tough to get out. So that’s what those clear plastic “pie plates” are for… 🙂

LOL GoldenGoose! I’m pulling the cassette off today to check and see if any of them were damaged…should have done that before riding the bike again.

Well all the best on your next event!

It sound like a memorable experience, like my 1st XC race. I started racing on my 54th birthday, got hooked on the first race, and went to sport class on the 3rd race. I really had a blast and found out the dos and donts real quik. I’m 72 now, haven’t raced for years but still ride the trails. keep racing and having fun. FUN is the name of the game!

Great info. Thanks. I have been doing the endurance races and had some thoughts of maybe trying a cyclocross race this fall. I just kind of like the idea of not having to ride 40 to 50 mile training rides. 10.5 miles of allout riding sounds rough though! I am 55. Do they offer age classes?

Sounds like good times.
I havent raced yet although I have attended my fair share of them. I love being around the events, the excitement can just hang in the air. Them kids races can be very cool to watch! I started volunteering at some races in AZ a couple winters ago and it became almost my favorite past time. I started shooting pictures for the races and was always welcomed in the pits and out -on the track itself. Met a lot of great bike-people. There are some folders of photos at the bottom of my gallery page if anyone is interested-

Im headed out right now to pre-ride a course for a race I will be shooting tomorrow in Anchorage- bring on the bug dope!

@bikecowboy – If the race/series is big enough there will be several age groups at each ability level, so should be able to find out a class that you’ll fit into. And yeah, 10.5 miles full out is tough! It’s fun though!

Good effort… stinks you had that mechanical, though.

Thanks, yeah I did about 6 miles last night in full out intervals. I split it up in 5 sections with a couple of minutes in between. That was pretty tough for me.

It’s a little easier to push that hard pace in a race than it is when you’re riding alone bikecowboy. There’s so much excitement, and your adrenaline gets flowing – you just want to reel in the guy up ahead and no matter what don’t get caught by the guy behind you! You should try one, that’s the only way you’ll know if it’s for you or not.

I did my first race this April, as I have just gotten into the sport last July. April in Michigan is hit or miss. You could have dry and Warm one day, Cold Rain/Snow the next. One thing that I have figured out, when in a race, just go to have fun. If you are not having fun, then what is the use. I didn’t have much fun in that first race. Like you, it was 10 miles of singletrack. I didn’t pace my self at first and burnt myself out. Then the pace I had down the back third of the course, could’ve and should’ve been faster. I finished 15th out of 16. Frustrated, but humbled. It showed me that whether I’m racing or not, I really need to improve my bike handling skills, shifting and overall stamina. My second race was a 20 mile race, and from what I had learned from the first, the race was a lot of FUN.

I really need to try a race. I’ve been riding for 6 years, and I have yet to take the plunge…. Not quite sure if it’s my general dislike for organized sports or what.

@Greg: I’ll see you in August at Fools Gold. You’re gonna have a blast….once you get out of the pain cave LOL

For sure man! Think I’ve decided I’m doing the 50…. my longest day in the last couple of weeks has only been about 26 miles, (down from 35 a a month ago). I’ve gotta step it up!

[…] past the big cog and got jammed between the cassette and spokes.  AHHH!  This happened to me at a XC race not too long ago and afterwards I adjusted the limit screw on the derailleur and fixed the issue.  But somehow it […]