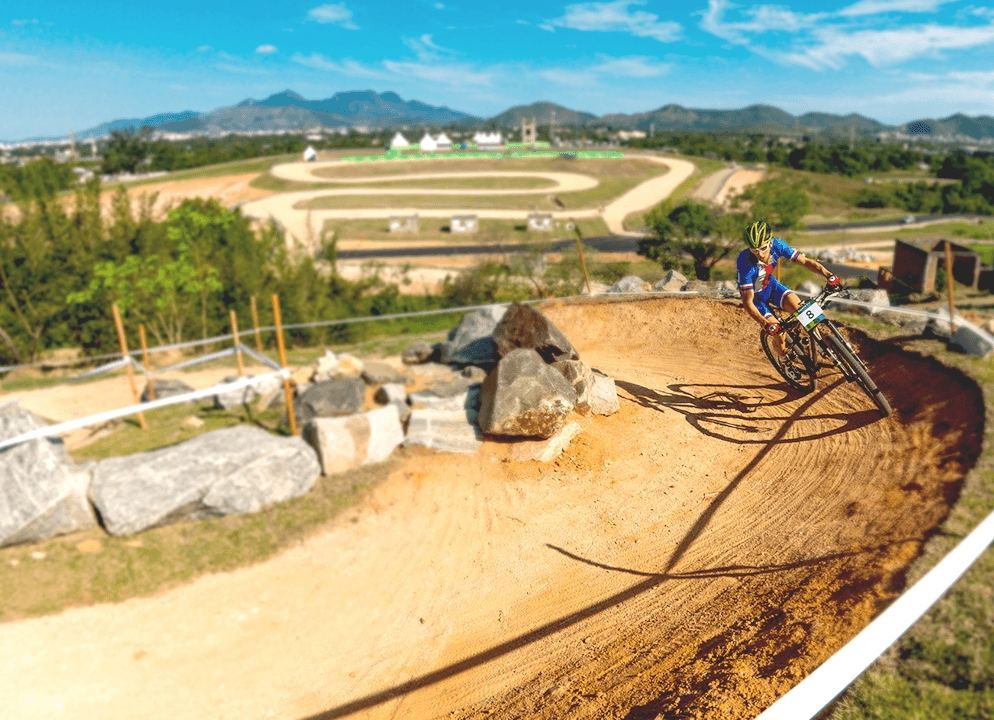 This year’s Olympic MTB course is a 4.85km circuit that was purpose-built for the Games. It’s designed to be spectator-friendly and per Olympic rules, no more than 15% of the course can be flat. Judging by the photos of the course, there will be rock gardens, a boulder-y section, flowy berms, and even what appears to be a rhythm section. The venue is located northwest of downtown Rio and the beaches, and is co-located with the BMX and canoe slalom venues.

Along the course there is a single feed zone and “Technical Assistance Zone” where riders can refuel and get their bikes fixed if necessary. Otherwise, it’s up to the athletes to fix their own bikes out on the course.

France is usually the team to beat in the Olympics, having scored a men’s and/or women’s medal in the mountain biking event at each Olympics since the sport debuted at the Atlanta Games in 1996. Julien Absalon, of France, is currently the #1-ranked XC racer in the world. Sabine Spitz is the oldest mountain bike competitor (44) and is also one of the winningest, with a bronze, silver, and gold medal to her name.

Other racers to watch include Nino Schurter, who’s been consistently ranked the top XC racer in the world in recent years. He’s currently sitting in the #2 position in the World Cup rankings behind Absalon, yet sporting the #1 race plate from last year. Also, Peter Sagan, the current road cycling world champion, is skipping the road race at the Olympics this year in favor of racing mountain bike instead. It’s going to be an intense competition!

On the women’s side, while Sabine Spitz is a favorite, Annika Langvad of Denmark currently has her edged out in the World Cup rankings, sitting in the #1 position.

Forty-two countries are competing in Olympic mountain biking, including African nation Lesotho, which has only 8 athletes competing in 3 sports. About a third of the athletes in this year’s competition are age 21-25, 26% are 26-30, and 34% are in their 30s. Just 2% of the athletes are over 40 and 4% are under 20 (the youngest is Denmark’s Simon Andreassen at 18.)

For those of us in the USA, the Men’s mountain bike competition will air live on Sunday at 11:30am EDT on the USA Network. While the women’s event doesn’t have an official TV air time, it should be possible to watch a live stream of the race online at stream.nbcolympics.com.