I’ve had the pleasure of testing quite a few mountain bike shocks back-to-back this season, including the new Revox Pro from Manitou. The Revox has gone through a few cosmetic changes and internal tweaks recently. On the surface the new Revox definitely looks much more polished compared to what it looked like a few years back.

The Revox Pro is Manitou’s top-level rear shock and is best matched with the Dorado (or any other dual-crown fork). Coming in at about 450 grams without spring (depending on length), the Revox Pro is ready to rock. With a battery of adjustments (HSC, LHS, rebound, pre-load, and no-tool volume control) this shock can be tuned for anything you can dish out. To ensure that last statement holds true, a 14 mm hard-anodized damper shaft has been incorporated to keep things under control. Cosmetic changes to the anodizing and a new black damper body give the shock a fresh new look. 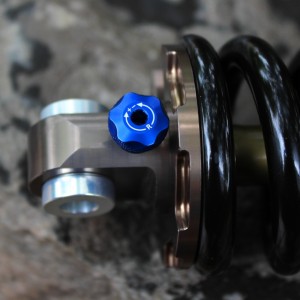 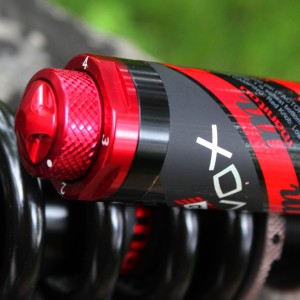 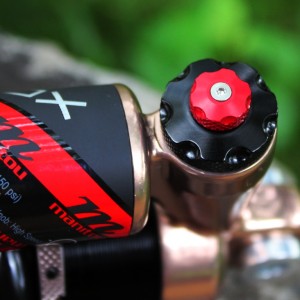 A shock with this many adjustments takes a bit of care to set up. Doing so correctly produces a rear shock that really shines and keeps you under control. When setting up the Revox, it’s a good idea to write down all the changes that you make. The detents are a bit soft, so recording adjustments as turns from full open / closed works best. Selecting the spring rate (usually manufacturers give you a good idea here) is a start. Consulting Banshee, for example, informed me that I needed a 400lb/inch spring for the correct rate to go along with the Revox. You can tell if you’re right when it comes time to setting up the sag. Usually you only need about 2 turns from initial contact of the spring to the spring seat collars. I wanted 35% sag, so from an eye-to-eye of 240 mm I wanted a compressed eye-to-eye of 213 mm. I tweaked the collar a half turn more, and I was there.

Once that was done, I was off to the slopes for some testing!

Below is a setup sheet: 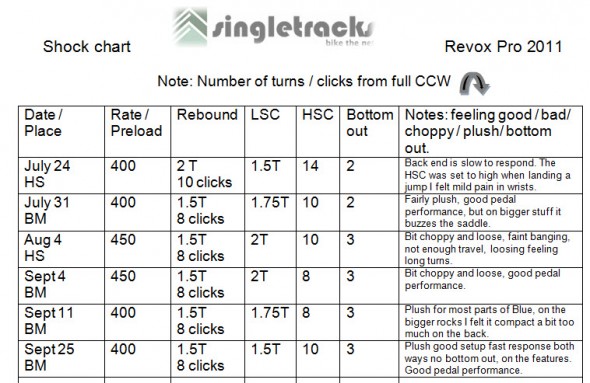 After the sag, I set rebound, starting closer to the middle of the range and backing it off until I got a wheel that returned fairly quickly but not so quickly as to buck me off the back of the bike. Now I tend to run the shock at 8 clicks from full CCW. It gives me a live feeling in the back without pushing me too far forward.

The next two adjustments are the low speed compression and then the high speed. So again, I set the LSC at half-way and I went and did a few rides. It took a bit to figure out that the LSC was perfect the first time out. I was playing around with both compressions until I found that the mid level, 1.5 turns, was the perfect amount to give me active compression when hitting bumps, but still hard enough for pedaling.

Getting the high speed set was a bit easier. Starting at just over the mid-way point, I went mostly down from there, finding that once the HSC was set to 10 clicks, which is just a bit below the mid-point, I was happy to play with the bottom-out adjustment. Bottom-out was moved to position three with 160 psi in it (10 over stock fill). 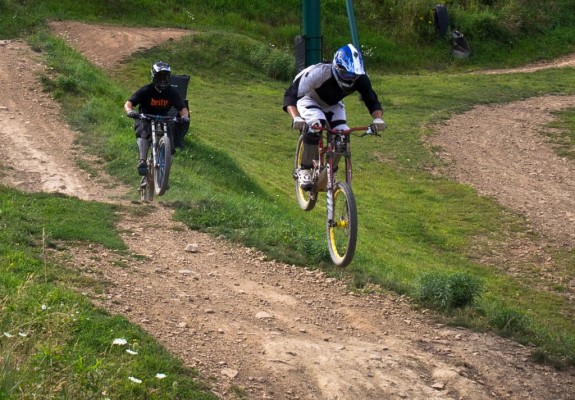 After spending some time playing around with the Revox Pro at Seven Springs, Blue Mountain, and Horseshoe Valley, I can say it works perfectly! The Revox never faded, leaked, or had any other defect. I had superior control over the rear of my bike. Over gnarly rock gardens or boosting tables or even hitting 12ft drops to g-outs to step ups, the Revox did an excellent job. A good upgrade would be a Ti spring (hopefully for next season).

The only issues I had were that the LSC detents didn’t click well and it was a bit hard to repeat settings. The small red knob was also difficult to adjust with gloves. The Rebound knob did detent well enough, but it was a bit stiff. If Manitou works out these minor kinks they will have a flawless shock. Get one of these for your bike for $400 MSRP (springs and hardware extra from $17.00 to $25.00).

Thanks to the folks at Manitou for sending down the Revox Pro for a review.

I’ve tried this shock out a few times. I honestly liked it just as much as the limited ride time I’ve had on an Elka. It’s a great rear shock.

I like your chart on the set-up. A very good idea that everyone should do when they get a new bike or suspension component!

The chart may be a bit much for some people who are just out for fun. But a must for those who really want the most out of their equipment and use a chart like that to evaluate setting changes.

Nice write-up. I use a similar system as well when first setting up my suspension. Great pic too;)