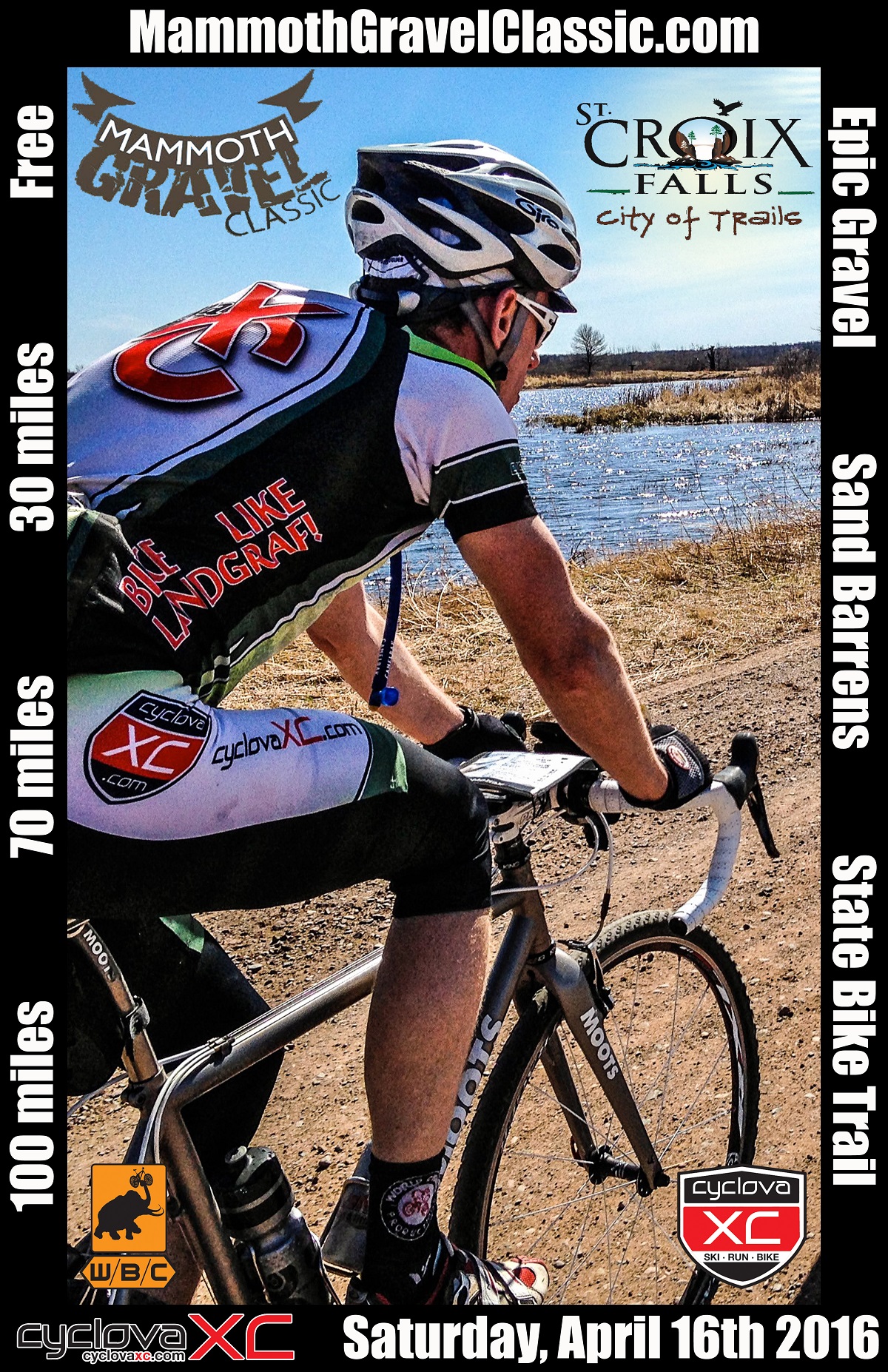 Scheduling your gravel ride for mid-April in Wisconsin can be a bit of a risk. In the 5 years that the Mammoth Gravel Classic (MGC) has been running, it has been rerouted once due to snow, and canceled entirely on another occasion. There’s nothing worse than going out and marking 200 miles of trail, only to have 20 inches of new snow come and lay waste to all your efforts mere hours later.

But the last two years of the MGC have been fantastic, and when the stars align and the weather is perfect, Mammoth Gravel Classic is one of the best gravel rides around. A combined effort between the Woolly Mt. Bike Club and CyclovaXC, the Mammoth provides a huge boost to the St. Croix Valley community and showcases the region as one of the area’s top cycling destinations.

Riders can choose from 30, 70, and 100-mile routes. It seems like every year I make the drive up to St. Croix Falls with the intention of doing the 70 and get “guilt tripped” into doing the 100. To some extent, you can get away with doing the 100 at MGC because the course is unbelievably flat. However, just because it’s flat doesn’t mean it’s easy, because the calling card of this gravel ride is the sand barrens. 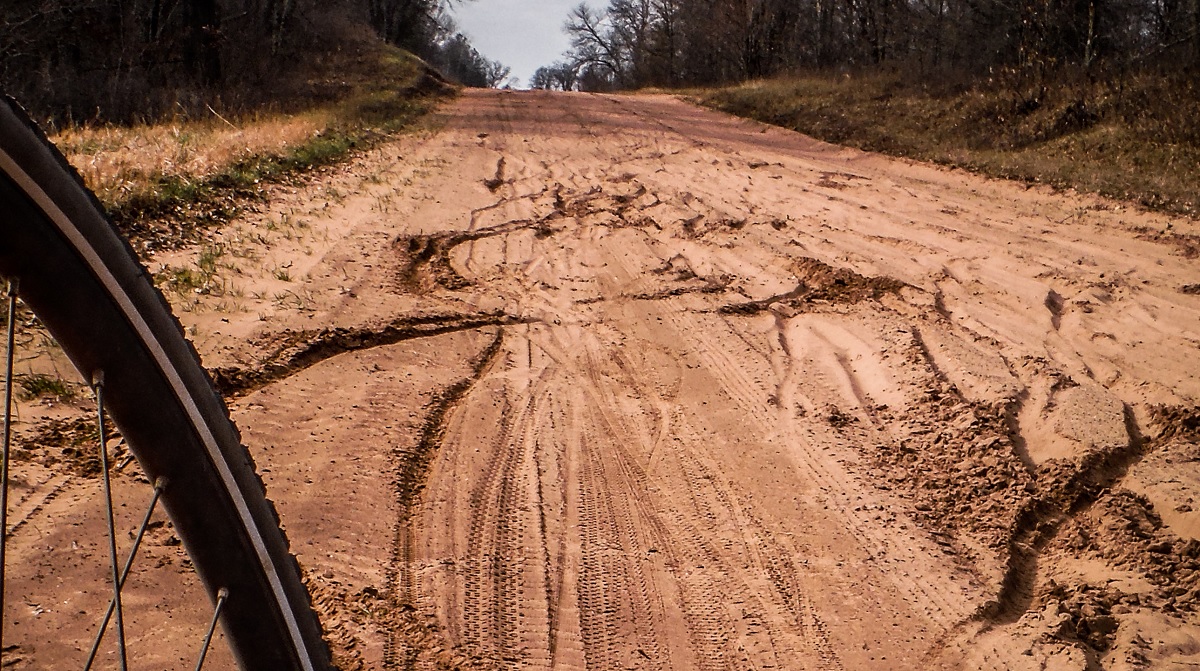 In 2015, there was a bit more rainfall leading up to the race, which does a lot to tighten up the sandy section about 20 miles into the course. This year, however, a lack of precipitation meant that riders were slipping and sliding as if they were riding bicycles designed by Willy Wonka or The Cat in the Hat. In upcoming years, I wouldn’t be surprised to see a line of spectators come out to the barrens and cheer on the riders who attempt to traverse the obstacle. It’s hysterical to watch as serious riders hit sand traps deep enough to stop all their forward momentum, leaving them spinning frantically as they twist their handlebars in an attempt to keep from falling over. The sand spins out behind in a rooster tail and, if the rider is lucky, a knob will eventually catch enough to propel the bicycle forward onto a harder, windswept section. Imagine a pack of twenty burly riders charging along only to hit a sand trap and be reduced to a bunch of tractionless kittens attempting to scramble across a slippery linoleum floor. There’s nothing else out there like the MGC barrens. 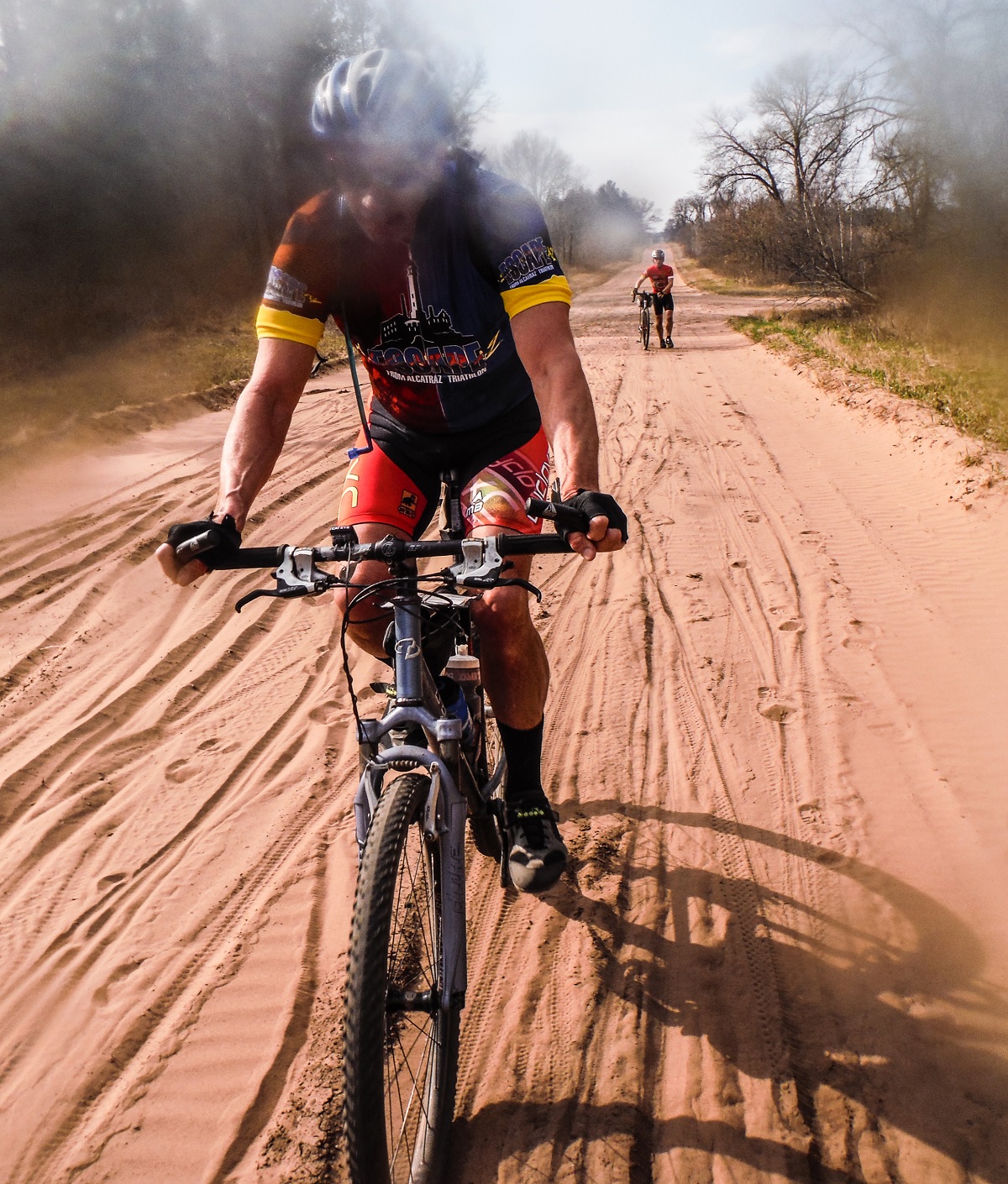 Many riders choose to bring fat bikes because of the barrens, but not me. I’ve always ridden this event on 38s and am content to play “push-a-bike” for a couple hundred meters if I have to. There tend to be a couple soft sections later in the course, but those can be navigated by running the grass that borders the gravel. 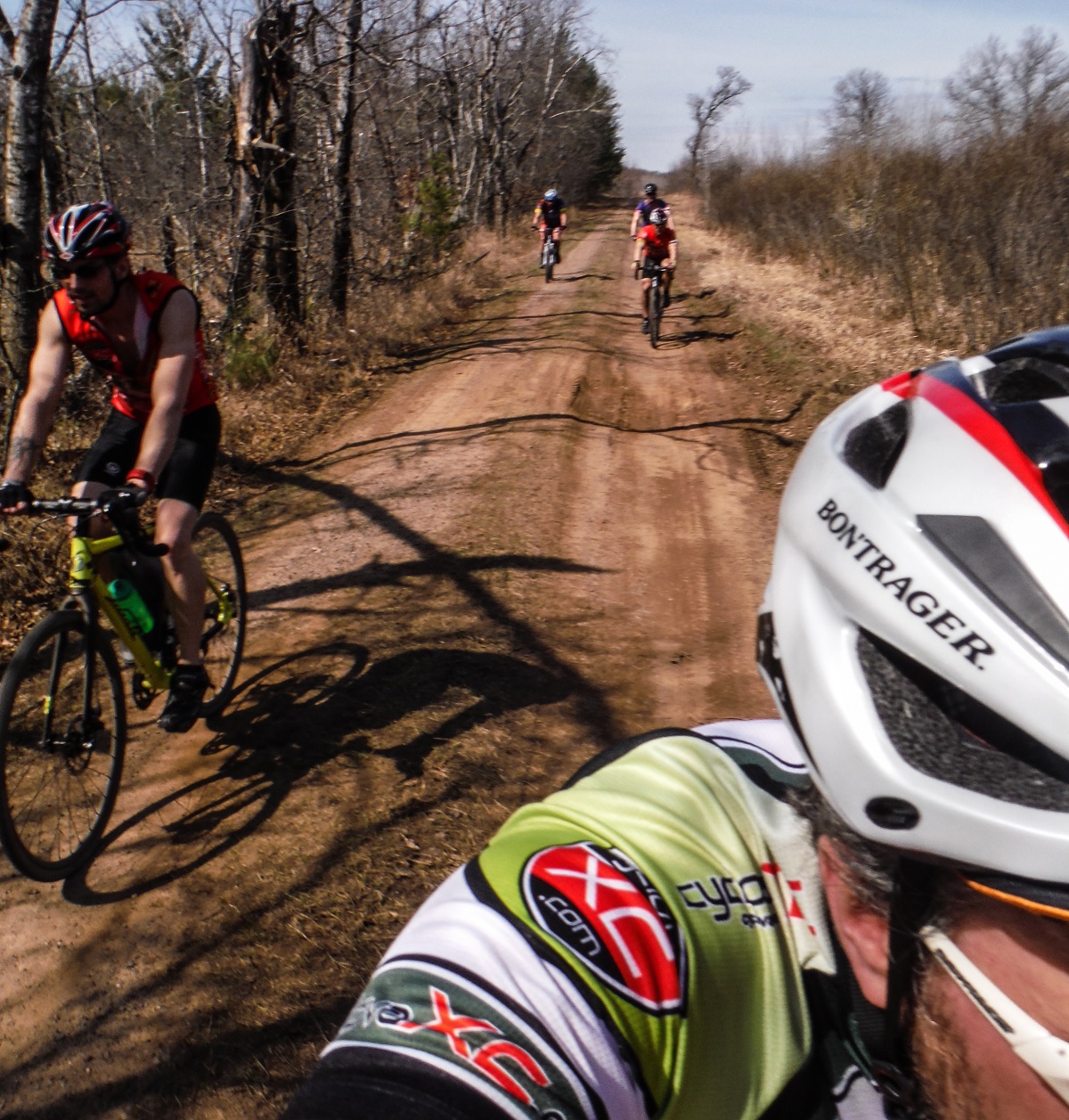 The ride goes on through the Crex Meadows wildlife area, a beautiful network of gravel roads that border crystal-blue lakes. After Crex, there are a couple paved sections before the ride finally arrives at the Gandy Dancer State Trail, which takes the riders all the way back to St. Croix.

The Gandy is a limestone surfaced railroad bed that is one of the great non-motorized trails of Wisconsin. The Gandy has been a non-motorized trail for more than 20 years, but there is constant pressure to get this tremendous cycling resource converted into a motorized trail. All riders of the Mammoth Gravel Classic are required to purchase passes to use the Gandy, making this event the largest single day for trail pass sales in Polk county.

Despite the fact that the Gandy is non-motorized, the trail is frequently damaged by illegal motorized use. The local cycling community does its best to keep cyclists from riding when the trail is wet, however, anyone who has maintained a trail knows how difficult that can be. It’s not that cyclists are malicious–newbies just don’t know how much damage their tires do on soft terrain. Occasionally you do find ruts caused by cyclists on the Gandy, but these still do represent legal, if ill-advised use, and disappear when the trail is graded (or with regular use). On the other hand, the 4-inch-deep trenches that are created by illegal motorized vehicle use require shovel work to be erased, and can provide a hazardous risk to the passage of cyclists. This year we were lucky for the most part, and the Gandy was in good shape, but there was some vandalism near St. Croix. The resultant trenches led to a crash and a broken collarbone.

With approximately 300 participants, the Mammoth Gravel Classic is a comfortably-sized event and a great way to start the gravel season. It’s good to get that first century under your belt. MGC is more weather dependent than other events, and can be sunk by a spring blizzard, but when the temps are in the 70s, this ride is absolutely fantastic. Check out the web page for maps and feel free to swing by and ride the course throughout the summer. If you are a cue sheet veteran, this one is a piece of cake! 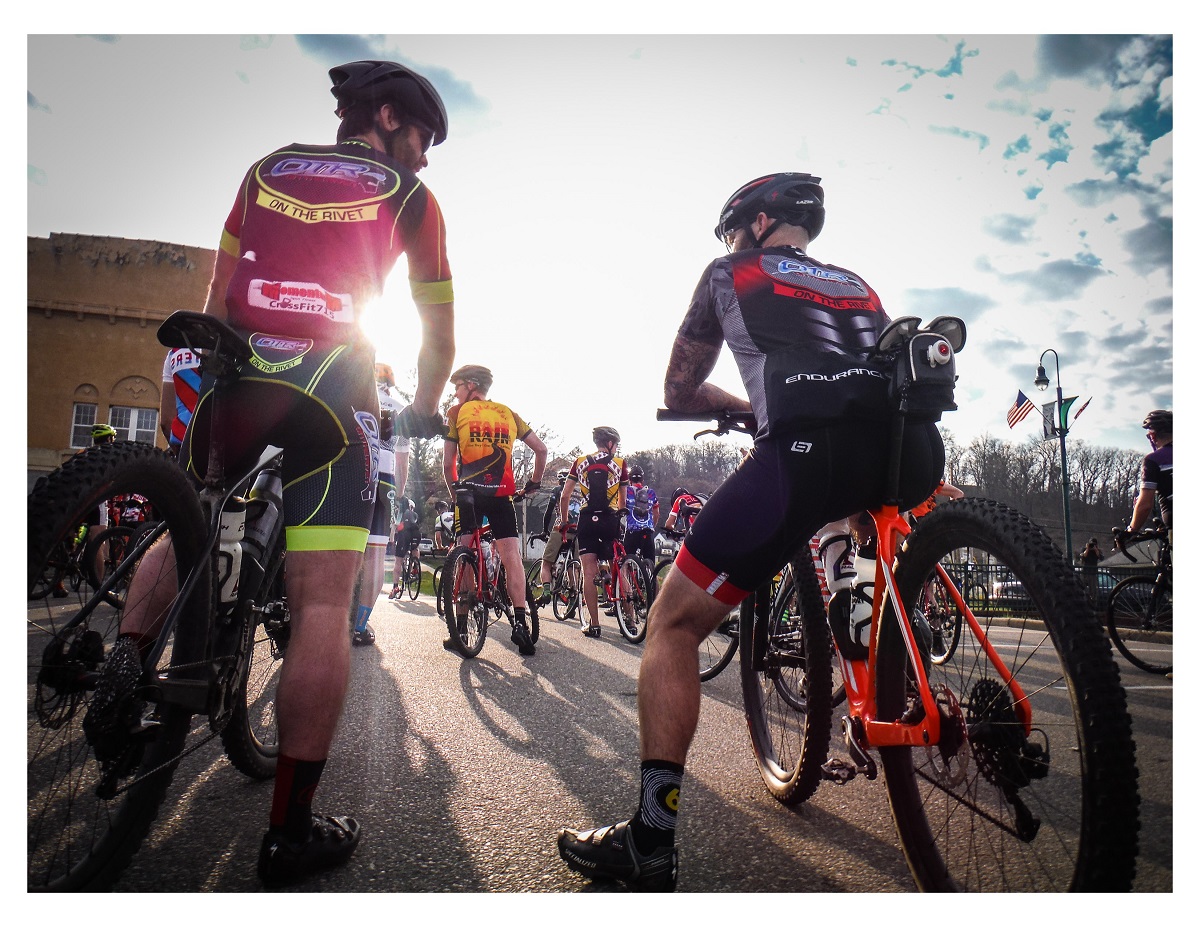