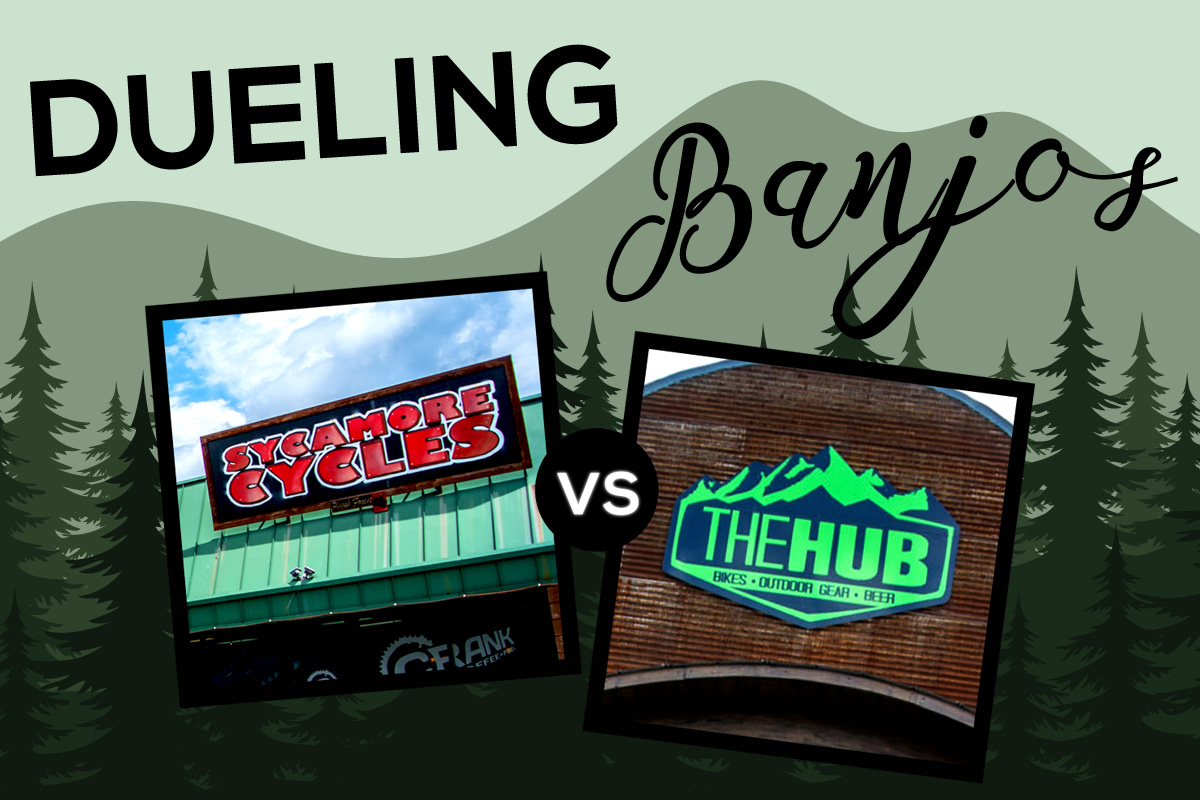 If you haven’t yet heard about the phenomenal mountain biking in Western North Carolina, congratulations on your new internet connection! While riders in NC and the Southeast as a whole have been making the pilgrimage to the region for years, it largely flew under the radar in the broader mountain bike community. That has changed over the past couple years as Pisgah has been covered extensively in a variety of print and digital publications, including Singletracks. Now, the area is known worldwide as a mountain biking destination.

The Pisgah National Forest is huge – over half a million acres – with Asheville dividing the Forest into two sections. While there are plenty of trails in the northeast chunk of the Forest – think Kitsuma, Heartbreak Ridge, and Star Gap – when people refer to riding Pisgah, they are generally talking about the trails near Brevard. The small college town of less than 8,000 sits on the doorstep to the southwest portion of the Forest. There are too many trails to list here, but some of the classics include Black Mountain, Squirrel Gap, Laurel Mountain, Pilot Rock, and Farlow Gap.

To call these trails demanding would be an understatement. Roots and rocks lie in wait ready to destroy both body and bike. Accessing anything but the closest trails to town is likely going to require long stretches of hike-a-bike. Since the trails are remote, they do not receive much in the way of maintenance. Erosion eats away the soil under water bars creating waist-high drops on some trails. Pisgah also happens to be a temperate rainforest, getting some 75 inches of rain per year. So, yeah, all those roots and rocks? The stay wet all the time, too.

Chances are high that during a visit to Pisgah, you will break something on your bike. When that happens, where do you go? During my recent trip to the area, I visited the local shops to find out.

Wes Dickson – the owner of Sycamore Cycles – was born and raised in Brevard. He started mountain biking when he was in elementary school. When he needed something for his bike, it meant an hour’s drive north to Asheville, as there were no bike shops in Brevard. After a few odd jobs following high school, Wes decided Brevard needed a shop, and he was going to be the one to open it.

In 1999, Wes applied for a loan from the bank to get started, but was turned down when they learned it was for a bike shop. Undeterred, Wes went back and reapplied. This time, however, Wes said he was using the money to purchase some furniture. And he was approved. With that $8,000 loan, he started Sycamore Cycles in downtown Brevard.

Early on, Wes had to focus on service over relying on bike sales, since his modest startup capital did not allow him to carry much inventory. That initial focus on reliable service with quick turnaround is still what drives the majority of Sycamore’s business. But, to be sure, the shop has grown substantially over the years. In 2003, Sycamore moved a few miles down the road from their original location to their current store in the shadow of the entrance to Pisgah. Now, their sales floor is chock full of the latest bikes from Specialized, Trek, and Yeti. Five years ago, Sycamore was able to open a second location in Hendersonville, NC, 20 miles away.

Locals make up the majority of Sycamore’s business – upwards of 70%, according to Wes’s estimation. The shop returns the favor by supporting numerous local races, sponsoring teams, hosting weekly rides, and helping with the high school mountain club. However, visitors are still an important part of the shop’s traffic, and Sycamore can get the majority of repairs turned around in less than a day. There are always at least two mechanics on the clock. In cases where parts need to be ordered, Sycamore has a fleet of rental bikes to make sure you limit your time off the trail.

I asked Wes about Brevard’s rise as a destination and the risk of becoming oversaturated. In his estimation, the town itself is saturated, but not the trails. An understandable sentiment considering the hundreds of miles of singletrack on tap. As he put it, Brevard is in a unique position because, “it’s a resort town without a mountain or a lake.” To handle the increased traffic, there will need to be investment in infrastructure – sooner than later, as the town is currently maxed out. While riding used to be a pastime of the local residents, it is now the reason people are moving to the area.

The Hub and Pisgah Tavern: A Destination

To call The Hub and Pisgah Tavern’s new location “impressive” would be selling it short. The 6,000 square foot bike shop, camping gear store, bar, and quasi-restaurant opened in February of 2016. Sycamore Cycles may be in the shadow of Pisgah’s entrance, but The Hub is just spitting distance away. The two shops sit across the street from one another, separated by a couple hundred yards.

The Hub originally began in 2008 as the bike portion of a gear store called Backcountry Outdoors. Over the next couple of years, the bike side became a larger portion of the business. In 2010, shop owner Sam Salman was looking for a way to fulfill The Hub’s motto of “Ride Bikes, Drink Beer.” Beer in bike shops is nothing new, but Sam wanted people to be able to hang out and drink legally. And so, the Pisgah Tavern was born. Due to North Carolina’s archaic liquor laws, you had to be a “member” of the Pisgah Tavern to order a beer. Luckily, all that was required to receive a membership was proof that you were over 21 years old. Sam says the addition of the Tavern turned The Hub from a bike shop into a destination.

That idea of The Hub as a destination is certainly apparent at their new location. Visit here on weekend and the parking lot will be packed with vehicles from all over, draped in mountain bikes. Even on a rainy Monday afternoon during my interview with Sam there were almost a dozen people hanging out at the bar. A rotating selection of food trucks sit outside the shop seven days a week.

While most of Sycamore’s customers are local riders, Sam says it is the exact opposite at The Hub – visitors to the area make up 75% of their business. Similar to Sycamore, The Hub tries to turn around repairs in less than a day. There are three mechanics on duty at all times, with a fourth person that can float in as needed. Busy days also see a dedicated bartender, which allows the mechanics to focus on repairs rather than pulling beers. There are a handful of Santa Cruz Stigmata cross bikes on the floor, but otherwise, The Hub carries only mountain bikes. In addition to Santa Cruz, The Hub stocks bikes from Evil, Transition, Ibis, Giant, Norco, and Chromag. Their demo fleet is 30 bikes strong this year.

Tourism has obviously been good for Sam’s business, but like Wes at Sycamore, he sees a strain on the infrastructure. In an effort to help the mountain bike community, The Hub recently adopted the popular Bennett Gap trail. They are now in charge of general maintenance and can go work on the trail without any additional approval. Rerouting, however, is not permitted unless it has been approved by the Forest Service. It is an interesting program and one I hope we start to see more of around the country. There is an enormous backlog of trail maintenance to be done, and the Forest Service is understaffed and underfunded, but there are riders willing to help. Most of them just don’t know where to start.

It appears The Hub is not quite done growing yet, either. Sam and his wife are working on developing the property behind the shop into a campground that will open in late 2016. Similar to (our favorite) Mulberry Gap, the Pilot Cove Campground will offer cabin rentals as well as “glamping” options.

During my discussions with both Wes and Sam, mentions of a new shop in town came up. Neither had much to say about the new establishment, so I decided to drop in on my way back to Atlanta.

Squatch Bikes & Brews sits on a side street a few blocks from downtown Brevard. The shop is tidy, with a good mix of product on the floor, but not so much as to be overwhelming. Talking to their mechanic Gus, I learned that the shop was started by James Matty from Ohio. James had been coming down to Brevard to ride for years, and longed to live in the mountains. So, earlier this year, he sold his landscaping business in Ohio and moved his family to Western North Carolina to start the shop.

Taking a page from The Hub’s playbook, Squatch is also slinging beers in addition to bike parts. Currently, they only serve beer in cans or bottles, but their selection of mostly local brews was solid. As for bikes, Squatch offers something a little different from the competition, stocking rides from Pivot, Kona, and Rocky Mountain.

Can Brevard sustain three mountain bike shops? If the traffic backups at the entrance to Pisgah and the overflowing parking lots at Dupont State Forest are any indication, I would be inclined to think so. And, having three shops gives customers plenty of choice. After all, between Sycamore, The Hub, and Squatch, you have access to at least 13 highly-desirable mountain bike brands. That’s a good thing, whether you are looking to buy a new bike, or get your current ride serviced – chances are someone in town carries your brand.

One thing is certain: no matter whether you call the area home or are just passing through, now is an excellent time to be a mountain biker in Brevard.

Sponsored
Brevard, North Carolina is a Mountain Biker's Paradise
Trails
The Pisgah Project Fundraiser: Chance to win $9,000 REEB SQWEEB...
Trails
"Pisgah Y'all!" Marin Mountain Bikers Get Snob-Checked in Appalachia
Trails
Everything You Need to Know About Mountain Biking and Visiting...

Wow! Those shops are all awesome an unique in their own ways! I would love to go and hang out at these places.

Thanks for the mention! We are not affiliated with the HUB, however we are fortunate to have both the HUB and Sycamore as neighbors. Can’t go wrong with either shop!

I can’t say enough about either shop, I’ve dealt with both and they have been equally great to deal with! I’m up there every couple of months to ride and can’t wait to get back up there. We’ll worth the 6 hr drive!

All three shops are great. Can’t go wrong. I visit all of them just to see what’s going on every time I visit Brevard.