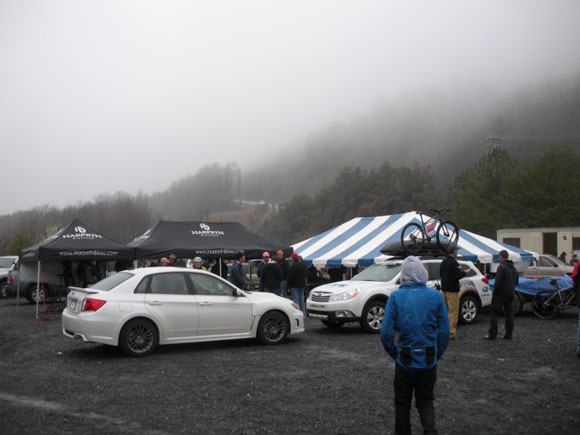 On Saturday I completed the third and final Snake Creek Gap Time Trial of 2011 in Dalton, GA and it was definitely a mountain bike race to remember. Regular readers will recall I rode the first time trial at the start of my 29 Trails in 29 Days challenge and the second race marked the finale of my journey in early February. A glutton for punishment, I drove to the mountains in the rain Saturday morning in hopes of claiming the 3×34 belt buckle reserved for those who complete the 34 mile course at all 3 time trial races.

I had been watching the weather forecast carefully Friday afternoon and had pretty much convinced myself I shouldn’t race – I might mess up my bike, the rain would be miserable, and besides, I didn’t want to contribute to damaging the trail. Despite my gift for making great excuses, mudhunny convinced me I would regret missing the race and she was right. Still, I kept asking myself what I was doing as the bus wound its way through the rain to the starting line.

With a steady drizzle falling, the race got off to a muddy start on the fire road leading down to the big stream crossing. This time I was actually looking forward to the water – at least it would clean some of the mud off my bike and drivetrain! I didn’t see anyone bothering to tip toe across this time – we all just gunned it for the other side.

I settled into the climb coming out of the stream crossing and at about the 3-mile mark the woman in front of me snapped her chain. I slowed to ask her if she had everything she needed and it turned out she didn’t have a chain tool. Crap. I stopped to lend her my tool and flagged down another rider I knew, Alan, who popped the chain off and got everything snapped back together quickly (I carry 10spd Powerlocks but this was a 9spd Shimano chain). According to my GPS we were stopped about 6-7 minutes which would become important later.

From this point the trail continued to climb and I found myself getting overheated in my Gore-Tex jacket with long sleeve jersey underneath. Having just stopped I wasn’t ready to strip layers so I sweated on until about the 7.5 mile mark which was probably a mistake hydration-wise. I removed my long sleeve jersey, ate a Gu, put my jacket back on, and hit next the short climb at low speed.

At this point – about a quarter of the way in with 24 miles to go – I was pretty much ready to quit. The 25% mark seems to be a mental barrier for me on most long rides so I knew I just had to power on. As we neared the halfway point and the first sag, I heard the riders around me saying they were thinking of throwing in the towel which made me even more pissed. At one road crossing a volunteer asked how many riders were behind me – how the [email protected]^$ should I know? I growled “a bunch” as I rolled past him and across the road. In the back of my mind I started wondering though – was I at the back of the pack already?

After eating a Clif bar at the sag I was feeling better and the climb out of the parking lot, while excruciating, seemed a bit shorter than last time. Before I knew it I was heading downhill to the first of several creek crossings and for the first time in a while I was by myself – I saw no one in front or behind me. On the fire road climb up the other side I executed a slow motion pass around one rider and sat down at the final sag with a banana and a Snickers bar. Just 8 miles to go – but the most technical part of the course was ahead.

During the previous two Snake Creek races I came to the conclusion that my technical and descending skills are pretty below average since it seemed like I was always getting passed whenever the trail pointed down. The slippery, ridge-top rock gardens are mostly rideable for me on a good day but I found myself slowing down to pick lines on my hardtail while others allowed their momentum to carry them through. At this point the trail was enveloped in dense, gray fog (clouds actually) which made it tough to know exactly where I was in relation to the finish. My legs were on the verge of cramping so I was very deliberate about getting off the bike slowly and lowering my frame to the ground to dismount rather than swinging a leg over the saddle.

After miles of alternating between riding and walking, I recognized the final rock garden/step up just below the cell tower which effectively meant the end of the course. The 1.5 mile gravel/paved road descent to the finish never felt so sweet. 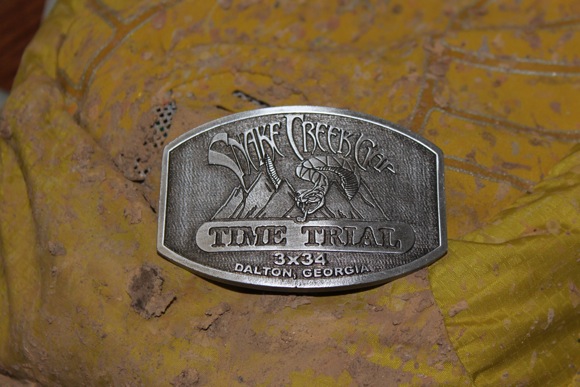 I crossed the finish line with an official time of 5 hours, 19 minutes which is 3 minutes slower than my first race BUT since I stopped to help with a mechanical at the 3-mile mark I was actually a few minutes ahead of my slowest pace. Still, that’s a good 40 minutes slower than the time I posted in TT #2 when I was fresh off my 29 Day challenge. It’s amazing how quickly my fitness returned to pre-29 Trail levels.

As one of 88 riders who completed the 34-mile Snake Creek Gap Time Trial all 3 times I earned the coveted belt buckle which I’m proudly wearing as I write this. The woman Alan and I helped at the beginning of the race went on to finish as just one of 5 women to earn a buckle this year. Respect the Snake.

It was an epic day for sure. Already looking forward to next year!!!!!

bc of dgaddis’ post and others stories, im looking forward to attempting this (the 17 mile) either later this year or next.

Great coverage. The only way I’ll get one of those belt buckels is to buy it on eBay I guess. Later,

After reading this article and pondering all of the suffering you had to go through to get it, I really want to earn one of those buckles for myself! Guess I’d better get pedaling…

I really wanted to do the Snake this year so I enjoyed reading about your adventure with it. I definitely plan to try to get all three done next year. Got to have one of those buckles. Thanks!

Yes, We DO Have Mountains in the South | Singletracks Mountain Bike News

[…] riders. Not to mention the Pinhoti Trail, which traverses the entire state from east to west. The Snake Creek Gap segment of the Pinhoti near Dalton, GA, in particular requires deft bike handling. Think […]