Rebecca Rusch, aka the Queen of Pain, may be the most decorated female endurance mountain bike racer of all time. Having set countless records in mountain biking as well as other sports, her achievements include–but most definitely aren’t limited to–record-setting wins while racing the Leadville Trail 100, Dirty Kanza 200, 24-Hour World MTB Championships, and the Kokopelli Trail.

I met up with Rusch for a quick interview to hear how she got her start in the world of mountain biking.

ST: We’re talking to all kinds of pro racers and professionals in the industry about where they are now and how they got started in mountain biking. I’m sure your new book talks a lot about that, too! Can you tell me a little bit about that?

Rusch: I’ve been a professional athlete for 20 years, but a mountain bike athlete only about 8 years. I was doing adventure racing eco challenge, so multi sport, multi day, and cycling was part of it. But it was my worst event of all of them. I was a climber, kayaker, navigation hiking, all that, and I only did cycling because I had to and it was part of the mix. I hated it hated it hated it and I sucked at it. But now I’m a professional cyclist, which is really weird.

So the transition between that is adventure racing was kind of dying and had lost its sponsorship, and I had Red Bull as a sponsor and they were like, “well, adventure racing is done, you have one more year on your contract, so just do something else.” The other races I had been doing were 7-10 days long, so endurance was my forte. So I was like, “well, what can I do for a year that’s the longest possible thing I can find?” And the longest thing I could find was 24-hour solo mountain bike racing.

My first race I ended up running my bike a bunch over the technical stuff, but I ended up winning my first 24-hour race and beating all the men. So I was like, “all right, well, I’m going to do bike racing for a year.” And they were like, “ok, cool.”

That just launched the whole career I didn’t expect. That was 9 years ago, and a few world championships ago, and eventually I grew to like cycling, but I didn’t like it for the first couple of years. I had the endurance but I didn’t have the skill. I was definitely a beginner beginner, like not good at all, but I could just keep going. I’ve gotten a little better and better, and now actually cycling’s become this sport I reach for and what I do the most of, and riding singletrack and riding dirt has become what I love to do instead of what I used to hate to do. It’s kind of an unusual story. My friends still can’t believe now I’m a cyclist. They’re like, “you suck so bad!”

As a professional in the industry, what’s your number one favorite thing about being a part of the mountain bike industry?

It’s mostly the friends and how cool everybody is. I race and travel around the world, and like just now I just hugged a guy from Ecuador who was at a race in Chile that I did last year. He was like, “oh, it’s so good to see you!” It just feels like a family even with people from around the world. Or where I live in Idaho, a bunch of people just came to my race there. Everyone’s just a big happy family. So I really like that part of it.

You have all kinds of wins under your belt: world championships, records in the Leadville 100, and the Kokopelli Trail. Out of all those accomplishments on the mountain bike, what one are you the most proud of?

Is your book essentially just about your journey through that?

It is. It’s stories, you know, so the cycling doesn’t come in until the end of the book. So there’s rock climbing, there’s paddling, there’s kind of something for everyone, so I hope it’s inspirational story telling for people, talking about adventures climbing El Cap or swimming the Grand Canyon or riding the Leadville Trail 100. It’s all different stories of stuff I’ve done. The hope is that anybody that reads it, that they get inspired to have their own adventure.

For more information on Rebecca Rusch’s rise as an endurance athlete, be sure to check out her book, Rusch to Glory. 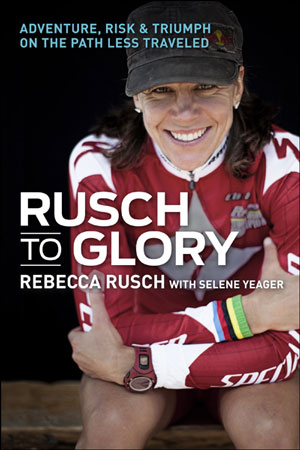 Progression
Pro Skills: Braydon Bringhurst Offers His Best Tips for Technical...
Mountain Bike Podcast
We Round Up New, 2019 Bikes and Gear at Sea...
Community
Inside the Pisgah Stage Race
Videos
Watch: Professional YouTube Mountain Bikers... How Is this a Thing?...

Great article. Had no idea she didn’t like mountain biking at first. When I saw her beat her own record last May in the Dirty Kanza 200 I would have never guessed it. She looks so determined, passionate, and natural on her bike. Like she really loves to ride. I love what she said in an earlier interview here on singletracks on the 180kl something. She likes to compete against herself and the rest is just fun. I ride alone a lot and I take that to heart. That is a big inspiration for me. Can’t wait till May this year. Hope to speak to her. If not just see her kick butt against the field.