Colt and Jessee Maule are the husband-and-wife team behind the cameras of Projekt Roam. They’re in the business of shooting and producing fantastic mountain bike videos and photographs, and we’ve featured a ton of their work over the past few years here on Singletracks. Whether it’s one of their fantastic videos, a killer photo of the day, or their new Weekly Wander photo feature on the blog, Colt and Jessee consistently produce top-notch, professional content.

When we spoke last on the phone, we chatted a little about what your lifestyle looks like now. Could you explain that to me, and what you guys are doing and why you’re doing it?

Colt: Well, Projekt Roam initially started as an idea for a website, like a guide for places to go ride your bike, kinda like Singletracks, but it was gonna be more like resort/park [and] riding zone-oriented… not specific trails, but just photos of different places that we would plan on traveling, and then make a whole ride guide out of it. After our first year of traveling around, (which was only an introductory stage, we just had a borrowed camera to take photos) . . . we decided to do it full-time.

[Since] filming was becoming really popular, we wanted to try our hand at filming. It evolved from there to what we do now, where instead of it being an actual website that’s a guide, we just try to film and document and write articles about places, inspiring people to go and ride those places on their own and check them out for themselves.

So, you guys are living on the road full-time now?

Yeah. So, we’ve been living on the road full-time in an RV for three years now. Before that we lived a normal life and all that, but we took a three-month tester trip to see if we would like living on the road, and could kinda travel around, and get the idea of how things were. We [had] traveled a little before that, but nothing as serious as that. We did this whole huge loop up into Canada and back, and we were totally hooked on traveling and the lifestyle, meeting new, awesome people. 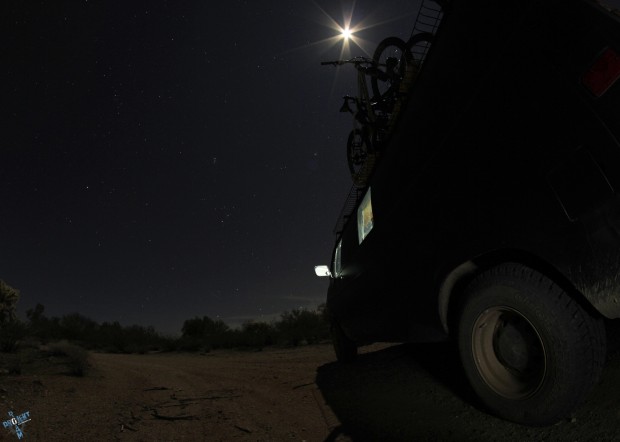 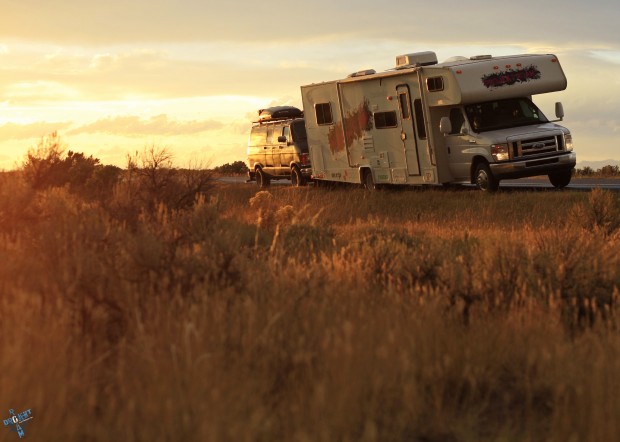 That’s where you guys are now… when did you guys first start mountain biking?

I’ve always had a passion or liking for bikes. I think I learned how to ride a bike when I was, like, 5 years old, and I don’t know what has really changed since then.

I guess we really started getting into mountain biking just at the beginning of this trip. We had some bikes that we had purchased beforehand that we were using recreationally on the weekends and stuff. [We were just] recreational riders, having fun on our local trails.

Once we started doing this, we got pretty serious about it, and obviously had to perform at a certain level in order to be in films and stuff, so we just kept trying.

Myself, I worked at bike shops when I got out of high school and stuff, and I’ve always had bikes involved in my life at some point or another. Jessee got into bikes just a couple years after we met… we both got back into that and started it again.

You said you took a tester trip and you guys went on the road. But what was the reasoning behind deciding to live on the road and ride bikes? 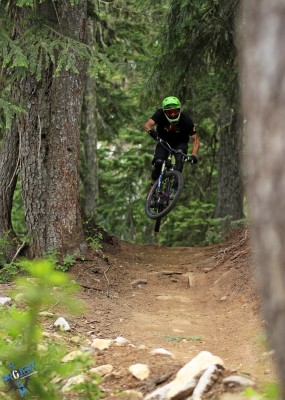 The main reason was that we weren’t really happy with the options that we had in front of us, as far as our jobs were going, and the lifestyle that we weren’t necessarily forced to live, but that was completely surrounding us everywhere that we’d go [while] living in Southern California. We grew up there and we were raised in that environment. I knew there was an environment out there that would suit me better based on who I was as a person.

Our initial trip was to go and travel to see what was out there. Obviously we’d been on trips here and there, and we’d read books and all that stuff, so we knew what was out there… but you don’t really know what’s out there until you go and step foot and see it for yourself.

Instead of falling in love with one place, we fell in love with the idea of travel and constantly exploring and finding new things and meeting new people. And it’s not just about bikes. Bikes are just one part of the whole experience. Our lives [are] directed by bikes, guided by bikes, certainly… but it’s mostly where bikes can take you and the experience they can give you, along with the whole adventure itself.

You know, I would sit at my job all day long… I wasn’t necessarily happy. Nor was Jess, we never got to see each other really. We just worked all the time for material objects, and those material objects would just sit unused because we were working to pay for them. So instead we would much rather just find something to focus on—mountain bikes because we liked them and it led to this adventure. We put all of our time and effort into that instead of trying to pay for that. You just live it and find a way to make a living to pay for the life that you would like to live, if that makes sense. 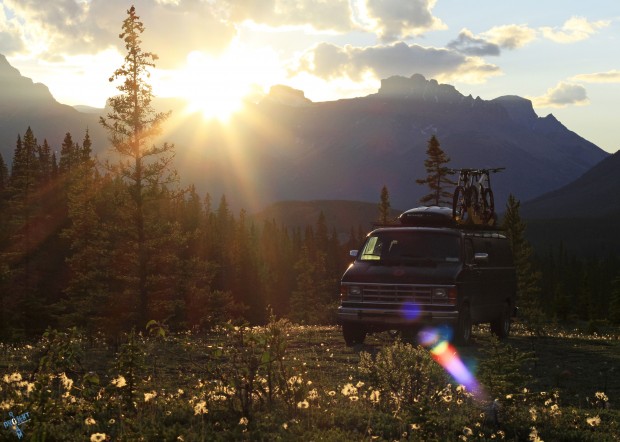 That totally makes sense! I feel like a lot of people are like, “Oh this is what I’d like to do,” but it takes a lot of balls to actually step up and go do it, you know? 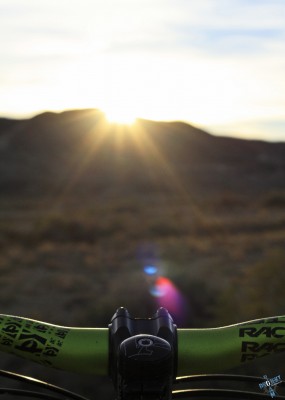 Yeah, that was really hard at first, telling everybody this idea of what we want to do, and I don’t think many people even caught on to what we were doing until a year into it, when we actually had material that we were showing. People finally started getting it. I think some people still don’t get what we do, that there’s an actual purpose, that we’re not just cruising around on a vacation. There’s a lot of work involved. Like you said, there’s a huge step to just go out into no-man’s land and travel around full-time, knowing nothing about it and nobody, not knowing where you’re going, and just making it work somehow.

These past three years on the road have felt like multiple lifetimes. Each year feels like an entire lifetime versus our lives in the past. It’s just crazy. I mean, you live a different story every day, there’s no repetition whatsoever. There’s no standard, there’s no rules or boss telling you what to do. Everything has to be made up by yourself, and every place you go you have to figure it out by yourself. There’s no guide book for it, you know?

It’s pretty crazy how much we have evolved as human beings, both Jess and myself, just from the whole experience. I feel like it’s the best school in the world, just to go out and wander and figure it out for yourself, because you’re going to learn a hell of a lot more than reading a book, you know?

We came up with this quote: “Second-hand knowledge doesn’t replace first-hand experience.” I feel that, really, is kind of our life. To really understand something you’ve gotta experience it by yourself. You can read about it all you want, but going out and doing it is a whole different ball game for everybody.

I know I’m getting way off subject, but that’s one of the reasons we like to write and to take photos and films. That’s our experience, but we like to leave it open-ended and hopefully inspire people to go out and create their own story. That’s what it’s all about. 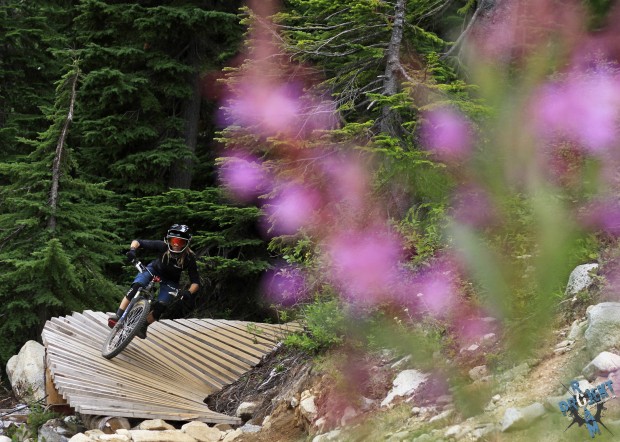 Last question, and we’ve probably touched on it a half-dozen times already: what’s your single favorite thing about your lifestyle now?

I used to be a firefighter–that’s what I used to do for a living, and I got into that because I really wanted to help people. With all that time and effort getting into that, it didn’t turn out to be helping people all the time. I wanted to find a way where I could contribute in my own way and still live the life that I wanted to live.

Jessee used to work in the emergency room as an ER tech. We met on an ambulance, that’s kind of the crazy life that we used to have. We morphed it into a life that we wanted to have instead.

Stay tuned to the Singletracks blog for more Weekly Wanders, videos, and more from Projekt Roam!

Progression
Pro Skills: Braydon Bringhurst Offers His Best Tips for Technical...
Trails
Fat Biking Across the Cordillera Apolobambas in Bolivia
Gear
A Cheap Chinese Bike Light Nearly Burned Down this Rider's...
Trails
Why You Should Plan Your Next Mountain Bike Adventure in...

Interesting article and interview. I think a lot of people would love to have a life like that, but I am also sure it is a lot of hard work and requires sacrifices. Traveling, living on the road, emancipates you but also encumbers you in different ways. It is difficult to have a family beyond a partner. It is difficult to afford new bikes and parts when you break them. Healthcare may not be affordable. You meet new friends and see a lot of beautiful places, but you may lust for the closeness of being around the same old gang. Don’t get me wrong: what Cold and Jessee do is awesome, and it sounds like it works well for them. They have the right idea, and they are trying to contribute to society and live the life they feel they are meant to. But that is definitely not for everyone, and it takes more than balls to get out there an do what they do. It takes purpose, commitment, and a vision. Not everyone has that, and I think a lot of people would run the risk of hate riding bikes after spending so much time on one. I like the real element to this interview, because it shows all of these things for this couple. And they do great work!

Hose Dragger, your life sucks just because I’m jealous! Seriously congrats on doing what you guys want to do, love the articles and vids!