Loop
Trail Description
About this trail
Bigleaf Slopes Park was established by an agreement between Iredell County and the Tarheel Trailblazers. Members of the mountain bike organization approached Iredell County with a proposal to build the trail on County owned property, over the course of 3 years.

The property is approximately 104 acres of wooded and open-space land with significant diversity in plant species. Most uniquely present is the Bigleaf Magnolia species, for which the park is named. Magnolia macrophylla, the Bigleaf Magnolia, is a deciduous magnolia native to the southeastern United States and eastern Mexico. This species boasts the largest simple leaf and single flower of any native plant in North America.

Phase I of the facility features 2.5 miles of varying degrees in difficulty of mountain biking and hiking trails. Plans for additional trails are scheduled for fall and winter of 2016 and 2017, to extend the total trail mileage to approximately 6 miles.

Since 2013, over 1500 hours of volunteer community efforts have been contributed to the property, including topography assessment, trail design, and finally trail construction. The development of this amazing new facility for Iredell County Parks and Recreation could not have been possible without the efforts of all of those dedicated volunteers
added by al_h 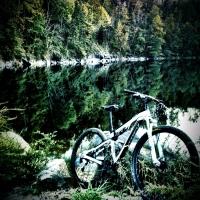 Review: The trail is ride-able and fun. Not too technical but there is one section towards the end that has you on the "edge". No pun intended. It looks as it if hasn't been taken care of in while. A couple of big trees that are down requires you to hop off your bike and climb over it. The map has been damage by water and never replaced.

Review: Great little trail, will be back

Review: Keep your elbows tucked, watch out for poison ivy, and ENJOY this little twist through the woods!

Review: Very cool little trail! It is very well maintained and thought out extremely well. Has a little of everything. A few steep climbs, lots of logs to hop, nice little DH section with lots of jumps and one whopping berm. It is short too, so multiple laps are a must. It is also very close to the Signal Hill trail, so hitting both in the same day is very possible [and recommended] I will be coming back.

Review: We rode this trail for the first time sunday evening.... It had rained earlier in the day, so of course it was damp! But still very nice! Well marked and maintained... Nice parking area with bathrooms...

Review: Suggest this is more "rough" than technical. Just too new and needs more riding and work. If allergic to Poison Ivey...might better wait until winter to ride. Few areas that were fun were outnumbered by areas where trail overgrown or needed some work.

Review: Rode Big Leaf today for the first time. I was "more used to" Signal Hill Trail which I also really enjoy. Big Leaf kicks butt and takes names. It's a very "fun" trail with some good jumps but a LOT of it is very tight and technical. And if you happen to lose your balance in a few places and lean a little too far, you're going down the side of a pretty steep hillside! I had to stop several times and regain my breath as a LOT of Big Leaf is hill and grade. I WILL be back and "hopefully " it won't kick my butt "as bad" next time. Have fun and be careful guys.

Review: This trail is tight, tight and tight! I have ridden blue trails all over and this one was the hardest trails technically that I have ever ridden. It has few places to get real speed. Roots were about average. Technical aspects such as coming out of tight curve and having a log that has only about a 12 inch area you have to hit it just right to get over. Not very forgiving. Great trail for good riders. Not so much for intermediates. Definitely do not go if you question your abilities.

Review: I tried this trail today. It has a very nice parking area and changing shed with port a potty. The trail is new and will improve over time. the biggest negative is the many areas that are just plain too narrow. Every time you get a little flow going it is ruined by a tight area. This makes the trail feel like there is too little reward for the uphill work. Get rid of the tightness and work on a little more flow and this will develop into a nice trail. Good start!

Review: I guess this is a moderate trail. It was marked with blue markings. My first time on it. I had high hopes for this trail after riding other trails professionally designed, but this trail just didn't flow much for me. A little more technical than I'm used to maybe. Too narrow in some areas. Turns too tight in other areas. Sometimes too narrow and too tight at the same time. Bumpy and rooty. Didn't seem to have a lot of reward (flows) for the effort you had to put in. Some of the trail was perfectly fine. Maybe with some rework it could be better. I'd seriously ask a professional group to come in and advise.