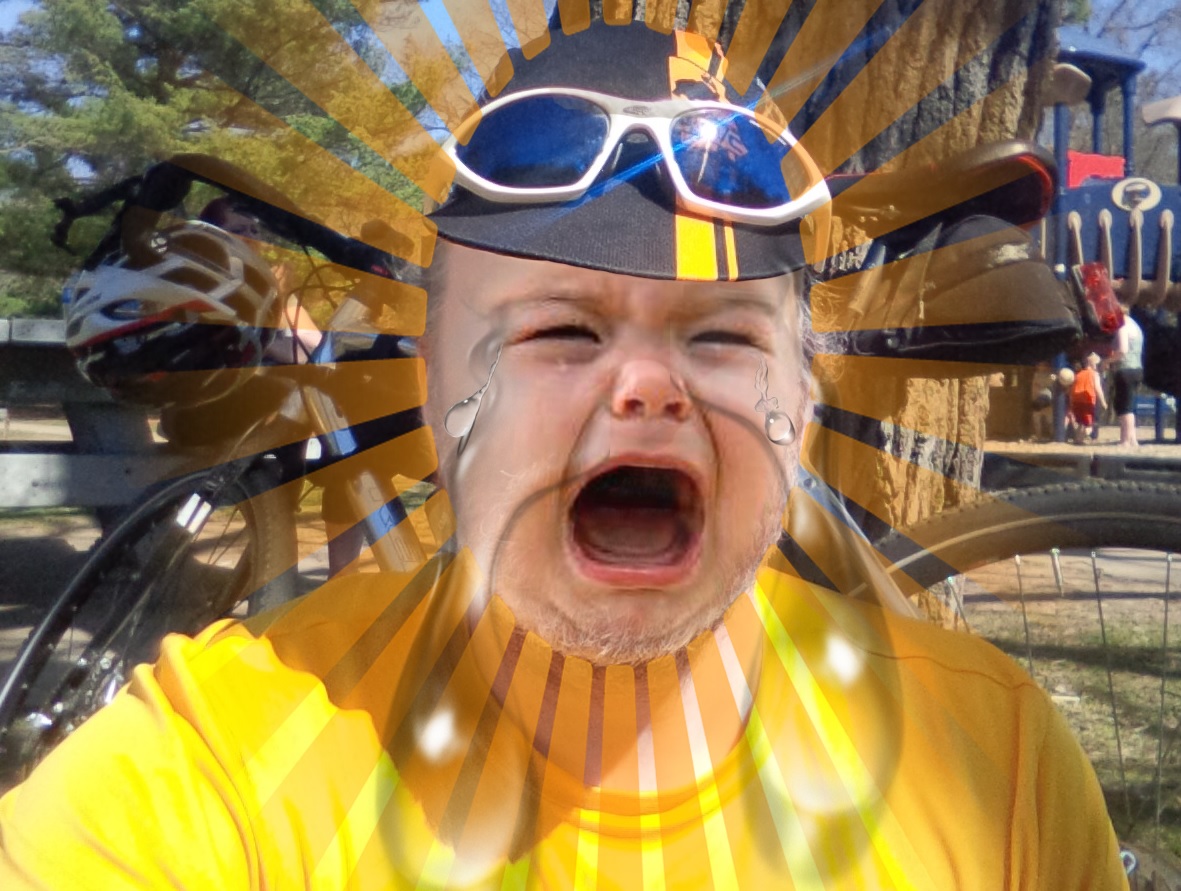 I’ve done a lot of group rides over the years. Sometimes I’m among the faster people, and sometimes I’m the one everybody’s waiting for at the designated stops. When you’re the slow person, the conversation is always the same. You smile and say, “you don’t have to wait for me.” To which everyone replies, “no, that’s cool, this is a no-drop group ride.” Most of the time everybody is OK with the idea of waiting, so you shouldn’t even bring it up.

Being slow is not a problem, but being crabby is a different story. If you ride up scowling and complaining about how miserable a time you’re having, the chances are there won’t be people waiting for you at the next stop. Good for them, because nobody should have to put up with a life-devouring succubus who makes everyone miserable.

One of the great things that cycling has taught me is how much better life is when you take the effort to put on a pleasant demeanor. The whole point of doing a five-hour ride is to challenge and exhaust yourself. Sure, it’s difficult, your muscles ache, you get hungry and dehydrated, and sometimes you just want to quit. But you push through with a smile on your face and you celebrate your achievement at the end. It’s inspiring to see people who are out there suffering in an endurance event who still manage to offer competitors and spectators a smile.

The whole trick to this is to just keep smiling. When somebody turns to you and asks you how you are, be pleasant! It doesn’t matter how bad you feel. Smile! Smile and laugh about how ridiculous it is that you’re smiling when you feel this bad. Do whatever it takes to find some humor in the moment, because when you sever the thread that’s keeping you from tumbling into the vat of misery, you inevitably drag everyone else down with you.

I learned this lesson the hard way years ago. I was 16 at the time and my girlfriend, who was 18, decided we should do the four-day ride her dad was organizing. Even as she suggested the idea, I suspected there might be some issues. She was the kind of girl who had a “no whining” poster in her dorm room, so you know she whined all the time.

The ride had routes that averaged from 60 to 80 miles per day. True to my fears, my girlfriend, let’s call her Olympia, didn’t bother to ride a bike once in preparation for this massive ordeal. However, she had something to prove to her dad, so she went out there to suffer like a sourpuss every morning. I’m not sure what she was getting from the whole thing because her dad hardly noticed she was out there (perhaps that was the problem). I, however, got pulled into this “boyfriend must ride with girlfriend” death spiral.

When people are miserable and they make no effort to hide their misery, it taxes you. Miserable people reveling in their misery grow resentful when they see you’re having a good time. Olympia took to having endless rest stops out on the ride. That wasn’t bad in itself, but it was where she decided to take the breaks. This was a road ride and there were some areas of rolling hills. Of course, the endless series of hills seemed intimidating when viewed as a whole, ranging off into the eternal distance as they did. But if you picked up steam by pedaling down a hill, you could carry your momentum most of the way up the next rise.

Olympia, however, often picked the bottom of a hill for a rest stop. She’d even put on the brakes so that we’d have to stop in the worst possible place. She wouldn’t indicate that she was about to brake either; instead, she’d just swerve in front of me and stop so that I had to frantically grasp at the levers and come to an emergency halt.

Then she’d sit in silence and refuse to eat while she muttered evil things about her dad and castigate me if I agreed with her.

For three days I put up with this nonsense. This kind of treatment starts to wear you down. I felt like I was trapped in an endless loop a quarter mile away from Mordor. I grew snippy. When random people offered encouragement, I bit them in the face. Some inner guilt demon whispers, “You have to help the grumpy person achieve a better mental state,” but that’s lunacy. All that happens is that you get sucked down into the misery, which is even worse for being shared.

Early in the ride on the fourth day, I caught Olympia eyeing up the bottom of a hill for a rest spot, and something happened. Rather than diligently slide in behind her for an unscheduled rest, I found myself accelerating. I reached down to grab the brakes, but somehow I couldn’t make my hand clench on the lever. My legs kept pedaling too, faster and faster, accelerating away. Behind me I could hear the furious sputtering of a tormented soul, but the words were unintelligible. I kept pedaling through the bottom of the hill and took my speed up the next ascent. There was sunshine at the top and I rode towards that, and when I got there I noticed even more sunshine just a little farther on and I rode there, too.

I kept riding and the day kept getting nicer. Olympia hadn’t been speaking to me for the last few days, but the oppression of her silence was gone. Now I could hear the happy wind, and the joyous rustle of leaves, and the titillating twitter of birds.

Ah, joy of joys, when the dark cloud is lifted!

I rode the rest of the route and got back to the starting point before anyone else, rediscovering the joy of riding. People were surprised to see me at the finish but I deflected their questions. Olympia finally showed up in the sag vehicle her dad was driving. She was furious, of course, but I’d already learned there was nothing I could do to change her perspective. Just because she chose to be crabby didn’t mean I had to be crabby too.

Needless to say that relationship ended, although I think it was after about another six months of stupid torment. These days, I like to do bike rides with everyone, men and women, that I intend on spending time with. If you go on a ride with somebody and they get crabby, that’s an instant deal breaker. That negativity seeps into every aspect of your life. People who can’t face and conquer a challenge aren’t worth having around. You can have a moment of weakness here and there, but you always have to recover and continue on. The thread keeping you above oblivion is too weak to endure the weight of two.

Culture
The Starting 5: Getting Back to Mountain Biking, Together
Culture
Good Shop, Bad Shop: What Makes or Breaks an LBS,...
Community
Riding With Dudes (Or Anyone Faster Than You): A Lady's...
Progression
It's OK that You're Slow

This… this is so true! MTB rides are no-complaining zones. If you want to complain, stay home, or ride on your own. I’m not going to listen to you!!

Great points about riding and about life, Walter. I go to the woods for joy, peace, renewal (and some adrenaline), not to be saddled with other people’s problems and lousy attitudes. I look forward to more articles from you.

Thank you sir. A great friend of mine often said that exercise is the best cure for what ails us…but the opposite can sure become true if you’re in the wrong company. I hope you enjoy my other articles!