Editor’s Note: Walter Rhein is a cyclist who rides road bikes, mountain bikes, and everything in between. He’s also a father, a husband, a son, and a friend. The opinions expressed in this commentary are Walter’s alone and do not necessarily represent the opinions of Singletracks.com. 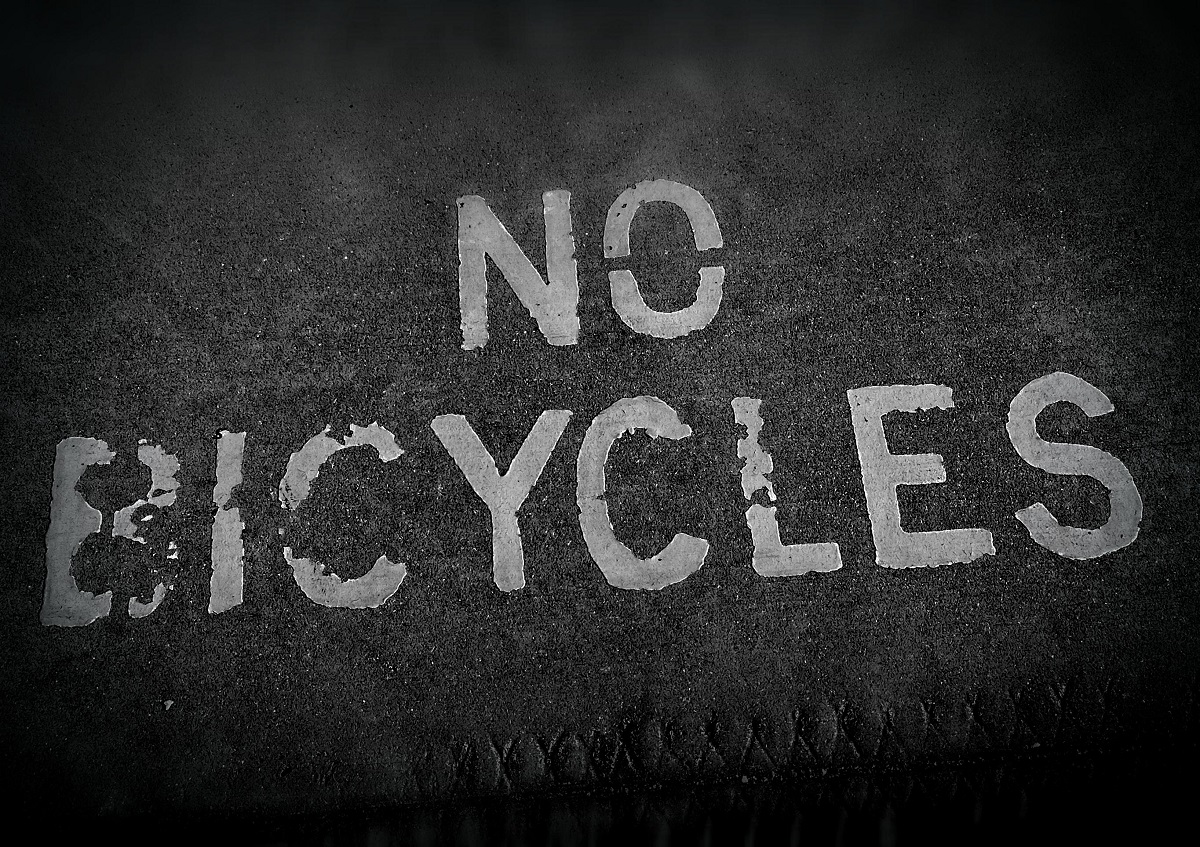 Spring can be infuriating for cyclists. The minute it looks like the trails have finally dried out, along comes another blizzard to bury everything under a blanket of soggy snow. As a result, mountain bikers are taking to the road more than normal to maintain their fitness, and that means a renewal in the inevitable conflict with motorists.

I become more nervous about road riding whenever I see an anti-cyclist meme on Facebook or a hatchet-job article which promotes the incorrect notion that cyclists are at fault for the majority of motorist/bicyclist collisions. The fallacy that cyclists are suicidal, law-breaking maniacs has been disproved by studies referenced in articles such as this, and this (see more below). But like desperate politicians in a tanking campaign, the anti-cyclist contingent continues to misrepresent cyclists simply to justify their prejudicial attitudes.

The contortions the media will go through to paint cyclists as the “party at fault” are often as intellectually dishonest as they are inaccurate. Take, for example, an “investigative report” by Inside Edition titled “Out of Control Bikers.” The article puts up a huge stink about “exposing” two cyclists doing 27mph in a 25mph zone. It is significant to note that the “journalists” did not do a comparative test to see how many motorists were going 2mph over the posted limit in the same area. In fact, the lack of performing this control is an indication of anti-cycling prejudice.

Although misrepresenting cyclist culpability in the media may seem like a minor issue, the sad truth is that cyclists are routinely severely injured or killed on the roads by at-fault motorists. To make matters worse, law enforcement seems reluctant to hold motorists who kill cyclists accountable. The statistics on this are all over the place, but they are consistent in an appallingly-low rate (this article cites a 10% conviction rate, this one cites 35%). I’ve had personal experience in this matter as a friend of mine was killed on a bicycle a couple years ago by an at-fault motorist, and the investigation and resulting trial did not provide a satisfactory level of due diligence (for example, the driver was not tested for intoxication). No Justice for Cyclists has an interesting comparative chart which demonstrates how cyclists often are arrested for minor infractions, while drivers are treated with comparative lenience even when their actions have severe consequences.

In an article titled “Is It O.K. To Kill Cyclists,” Daniel Duane writes:

When two cars crash, everybody agrees that one of the two drivers may well be to blame; cops consider it their job to gather evidence toward that determination. But when a car hits a bike, it’s like there’s a collective cultural impulse to say, “Oh, well, accidents happen.” If your 13-year-old daughter bikes to school tomorrow inside a freshly painted bike lane, and a driver runs a stop sign and kills her and then says to the cop, “Gee, I so totally did not mean to do that,” that will most likely be good enough.

Duane goes on to quote a Portland, OR attorney named Ray Thomas, who says “jurors identify with drivers.” That is, drivers can imagine themselves striking a cyclist one day, so they are reluctant to set a precedent of true responsibility.

This attitude represents the cultural misconception that desperately needs to be rectified. We live very much in a culture of “victim blaming” when it comes to cyclist/motorist collisions that lead to cyclist injuries. A step in the right direction is the recent passage of many Vulnerable Road User Laws, but what is really required is for all cyclists to take it upon themselves to become activists to change the current perception.

Part of the reason the general public is intentionally dismissive of the plight of cyclists is that people believe that bicycles (and motorcycles) are inherently risky because they are hard to see. The “inherent risk” part is debatable, but bicyclists are often invisible to motorists because of a cognitive function called “selective attention.” When people are intensely focused on a task, they become completely blind to distractions. This was very effectively shown in the “Invisible Gorilla experiment” in which test subjects were told to watch for certain phenomena in a video and became so focused that they failed to notice the moment when a gorilla slowly walked into the frame and waved at them. Because of selective attention, motorists become so focused on scanning for other vehicles that they simply do not see bicycles even when cyclists cross their field of vision. It’s important to recognize that a cyclist doesn’t just seem to be invisible to motorists–because of selective attention, cyclists literally are invisible.

The fact that fatal motorist/cyclist collisions can be a by-product of normal cognitive function doesn’t mean that nothing can be done to avert these tragedies. It’s not enough to tell cyclists to ride defensively. Anyone who is a cyclist needs to view every vehicle as a very real threat of death, and probably already does. What also needs to be done is for law enforcement to introduce social conditioning so that motorists instinctively begin to include cyclists within their selective attention when driving. Would it truly be unreasonable for police officers to set up traps where drivers are cited based on whether they give adequate space to a cyclist while passing? If the effort is made, all drivers can be trained to have a better respect for cyclists, which would lead to a reduction in cyclist fatalities. We already teach drivers to be aware of children chasing errant balls in suburban areas… why not further emphasize conditioning to promote cyclist safety as well?

A final point in the cyclist/motorist conflict is that angry motorists will often say that the cyclist was not obeying the rules of the road. However, this argument strikes me as problematic. A bicycle does not have to be registered in order to be used on a public road. A bicycle rider does not need a license to ride a bicycle on the road. In fact, many cyclists are children on their way to school, or performing a paper route, who have not earned their driver’s license and therefore do not know driving laws. “Who’s To Blame In Crashes Between Cyclists and Motorists” has a chart which shows that when a cyclist is at fault in a collision with a motorist, the cyclist is generally under the age of 15.

What can be done?

Cyclists need to be more diligent in their activism to demand fair treatment. Although it may not seem socially courteous, prejudicial statements against cyclists must be contested much in the same way that sexism or racism is combated. This video by Maddox (some strong language) about the “Irrational Hatred of Cyclists” is a good start.

Cyclists can’t afford to be apologetic or accepting of anti-cyclist prejudice because cyclists are routinely killed by motorists without consequence. When individuals suggest that cyclists are “reckless” or that they are involved in crashes because they break the law, explain how this is statistically not true. You will encounter individuals who will disseminate misleading or inaccurate statistics. In those cases, remind those individuals that their own child or niece or friend might someday be the victim of a distracted motorist. Share this article with those individuals.

You won’t convince everyone you talk to, but it is important to contribute to a unified voice within all forms of media that defends the rights of cyclists every time the issue is discussed. If you’re afraid that your own child might be hit by a car someday, you understand the need.

Risky Riding Rarely to Blame for Bike Accidents, Study Finds
TA: Most City Pedestrians and Cyclists Killed by Drivers Who Broke the Law
Out of Control Bikers
Killed While Cycling: Why So Few Fatal Bike Crashes Lead to Arrest in NYC
No Justice for Cyclists
Is It O.K. To Kill Cyclists
Does The Law Go Too Easy On Drivers Who Kill Cyclists?
BIKE LAW UNIVERSITY: VULNERABLE ROAD USER LAWS
Driver Arrested After Swerving And Hitting Cyclist In Glendale, Police Say
Is the law too soft on motorists who kill cyclists?
Kill a Cyclist and Get Away With It?
You Can Kill Anyone with Your Car, as Long as You Don’t Really Mean It
Bicycling advocates renew push for ‘vulnerable user’ law
What are the Dangers in Terms of Cycling Safety?
Cyclists and motorists do not want to share road, report finds
Irrational Hatred of Cyclists