In June of 2012, my wife and I were about to embark on an almost two month-long journey across the United States to ride and document mountain bike trails in California. (To catch up on that series, check out the 2012 road trip recap.) I tried to get a camper in to review, but to no avail, so we ended up tent camping and staying in hotels most of the summer. However, during the process of seeking out potential campers I wrote an essay and entered it into the Coolest Camper Ever contest, and then promptly forgot about it. 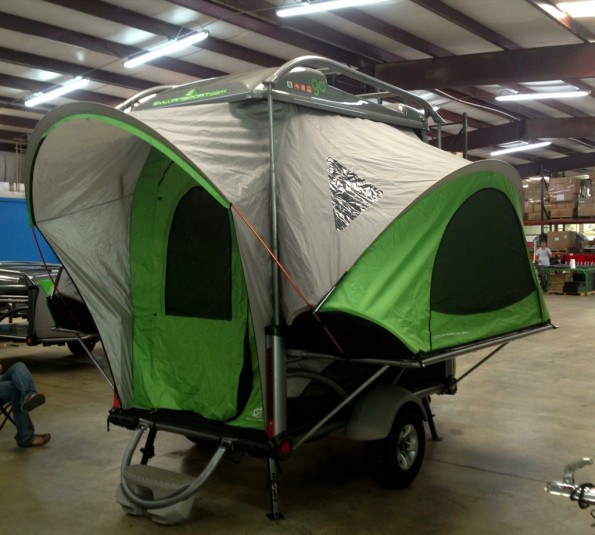 Fast forward to August 2012, and I received an email from Sylvansport saying, “Congratulations, you’ve won!” Out of over 2,000 essays, my essay was one of three that was chosen as a finalist. As a result, I have the opportunity to borrow the “coolest camper ever,” the Sylvansport GO, and take the trip I had pitched to them. Oh, and I also got a pretty sweet four thousand dollar prize package of outdoor gear to go along with it.

I received the news of my contest win almost a year ago. Right now, it’s July 14th, and we are rolling down Interstate 80 in Nebraska, cruising at 80 miles an hour. We are heading for Ogden, Utah tonight and then our first main destination, Bend, Oregon, tomorrow. And no, I’m not driving and typing… my lovely wife Summer is taking a turn at the wheel.

Over the course of the next month, it’s my job to ride trails and camp in this camper—pretty sweet gig, if you ask me. I’ll be putting the GO Camper through its paces, trying to determine whether or not it is indeed the “coolest camper ever.”

Stay tuned for my verdict on that point in about a month, but for now, check out some of the cool features that the GO boasts:

The essence of the GO is versatility. The amount—and variety—of gear you can haul with this trailer is the primary selling point. Specifically, it’s designed with outdoor enthusiasts in mind.

The design of the trailer was inspired by mountain bike and kayak construction principles. For instance, the style of tubing used to construct the frame is very similar to mountain bike tubing (but thicker). For more information, check out my article on Tripleblaze.com detailing my tour of the Sylvansport factory. 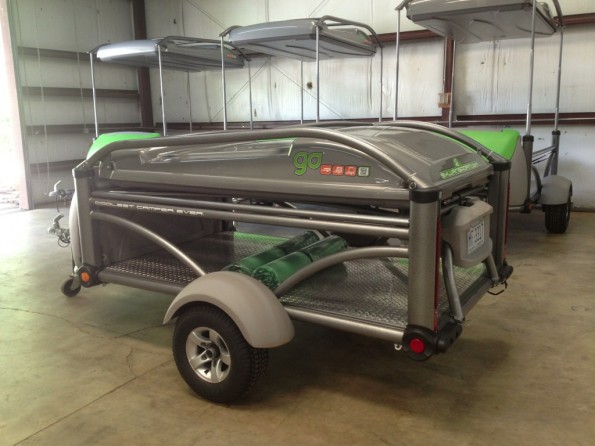 To begin, the “Thule-compatible” factory frame on top of the GO is ready to haul everything from several mountain bikes to kayaks and canoes (and beyond). If you’re mounting a mountain bike to the top, you just need to ensure \ you have the proper adaptors to mount your bike trays.

Don’t want to invest in new trays or adaptors just yet? No worries. The GO can be pulled behind your vehicle with the top all the way down, or with it raised up another few feet. 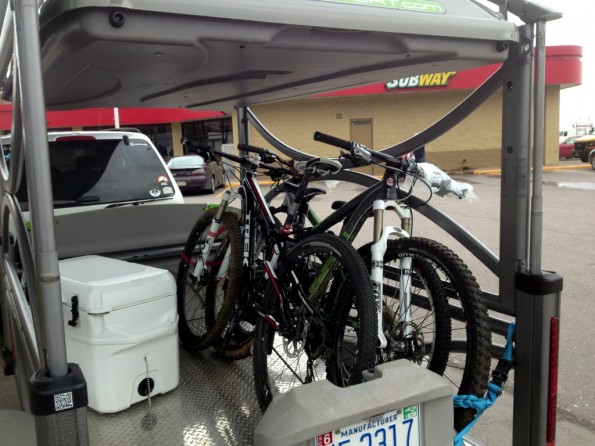 If you’re into motor sports as well, this camper can easily haul a couple of motorcycles or an ATV. The rear step detaches, the top cranks up high, and a pin pulls out of the main shaft allowing the back of the trailer to tilt down so you can load heavy equipment. Once you drive onto the steel-decked trailer (capable of holding up to 800 pounds) and pass the axle, a pneumatic shock slowly lowers the front end. Stick the pin back in, strap down your equipment to the heavy-duty trailer rails, and you’re good to go. 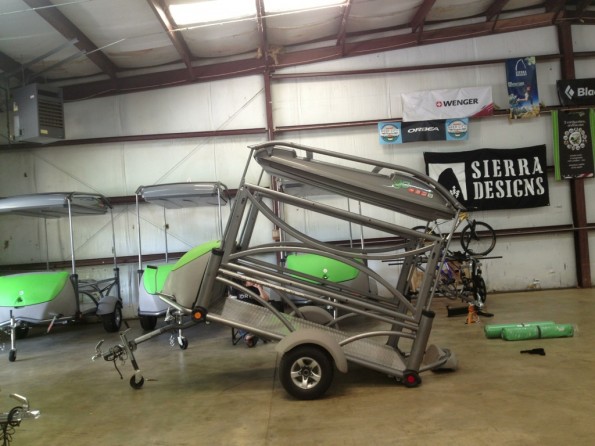 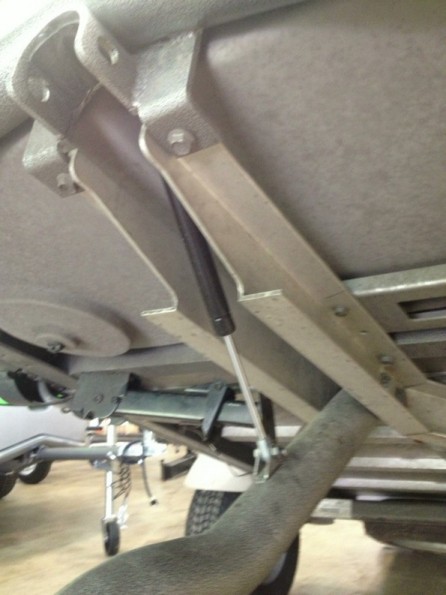 As for the camping part of the camper, the complete tent (all one unit) and sleeping pads all store in the low-profile camper top, and a few of the poles store in the big storage compartment at the front of the camper. Note: that front storage compartment isn’t nearly filled by the poles: this is the perfect place to store additional gear, such as smelly riding gear you don’t want stinking up your car. 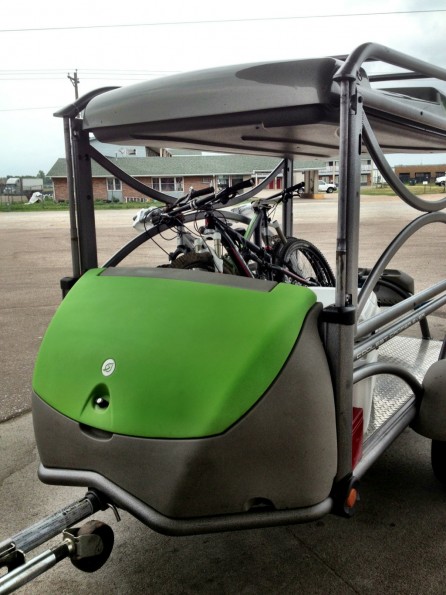 Once you’re ready to set up camp, the upper sides of the trailer fold out, and are supported by struts. Stabilizer legs swing down from the bottom of the trailer and crank into place to provide a firm foundation.

Then, just crank the top up all the way, pull a cord on the tent cover, and the bottom hinges down and settles into place as the rear wall. The entire tent folds out as one unit, and in minutes clips into place on the trailer frame.

Inside the tent, there are easily-accessible tiles to use as the base of the beds on each outside overhang.

Next, the interior can be set up in a reported six different configurations, but there are two main configurations to consider. One tile can easily be used as a table in the middle between the two outer beds, or two of the planks can be set across the space to form a massive king-and-a-half bed that is capable of sleeping four really good friends, or a small family of four.

The camper also comes with four sleeping pads for the bed, as well as an optional awning/porch you can hang off the front door.

Setup time, even by yourself, is very minimal. According to Sylvansport, you can get out of the rain in about five minutes (and then add time to setup the interior). Setup time, on average, is easily less than 15 minutes—compared to setting up the big two-room tent that my family used to camp in as a kid, this is easier by far!

Tear down time is even faster. By myself, the very first time I took this camper down, I did it in about 9 minutes. Once I know exactly where everything goes, I bet I can cut several minutes off my time!

One other important feature is the extremely lightweight design. The camper is designed so it’s easy to pull for first-time towers who may have never pulled a trailer before. With a total weight of 840 pounds and a tongue weight of about 70 pounds, this is probably the lightest camper of its size in existence. Consequently, it can be pulled by any vehicle with a hitch, including passenger cars.

Once at camp, you don’t even really need to back it in if you are uncomfortable: lower the front wheel, take it off the hitch, and push it back into place.

As you might imagine, this sweet setup isn’t cheap: MSRP is $8,495. However, there are two things worth noting:

Stay tuned for a comparison to a standard popup camper to be published on Tripleblaze.com, and stay tuned for the final review!

Many thanks to Sylvansport for allowing me to take the GO on the road!

Awesome! I entered that an d completely forgot about it haha

Jealous and fascinated. Thanks for the write up!

Wow, that’s such a cool setup. Unfortunately, it’s also so far out of my price range, it almost looped all the way back around to me,

This thing incredibly cool, but that price tag is truly outrageous. I was thinking more in the $2000-3000 range. Still cool, though.

See my notes on the price at the bottom of the blog post.

Here’s one factor affecting it: it’s 95% American materials, and the campers are made right in the United States.

Some people are all about the “American Made” bandwagon, but when they see the price tag a large percentage change their tune 🙂 Still, I think the Sylvansport provides a decent value regardless of where it’s constructed.

I still have more testing to do before I write the final review… stay tuned!

I had a feeling that was part of it. I definitely like the fact that it’s mainly American made.

Took a good look at one of those last year. Can be used for many types of sporting equipment. Also makes a nice light use trailer for hauling things around home. A very cool camper, would like to see how it holds up in the long term real world of camping. It’s a lot of $$$$$$ to shell out for what is essentially a cross between a tent, and pop-up camper.

Saw one of those in person at Dominion Riverrock last year and thought it was the coolest thing ever and instantly wanted one until I saw the insane price tag.

I guess it’s one of those items that is so specialized it costs ludicrous amounts of money. I’d have to camp a HELL of a lot to spend even two grand on one these things. Feel like you could combo a utility trailer and a really nice regular tent, and still have like 8000 left over, but to each his own.

I seriously like the concept and with a couple of design changes I would be all over this. My biggest concern is the open sides. It needs to have either a solid wall or perhaps some kind of steel mesh to keep things contained. As it stands now you have a good chance of losing things out the sides. As for me personally, I drive a 4wd vehicle and the tiny tires and wheels make for seriously bad ground clearance. Although, if you only drive pavement or graded fire and service roads that won’t be an issue. And finally, how about some way to step up to reach things on the top. That fender doesn’t look strong enough (or safe since it has no flat surfaces).

I like the overall package though. But for me at least it would need just a little tweaking before I would consider it. I’ll be curious to read the results of your “real world” review!

Very cool, and congrats! I’ve seen one other trailer that is of similar design, called the Jumping Jack Tent Trailer, which goes for about $6k. I recently got rid of my big trailer (30′ monster) and want to go back to something smaller like this. I found with the big travel trailer, while it is very nice and comfortable, with all the amneties, we didn’t camp as much because of the added cost and only being able to camp at very “main stream” camp grounds.

With our big camper, I found my son wanting to hang out inside watching satellite tv on the big flat screen. That’s not what I envisioned when I bought the thing!

Yeah, this thing definitely provides a few creature comforts while still keeping you connected to nature! AND you can maneuver it into tiny tent sites… pretty sweet.