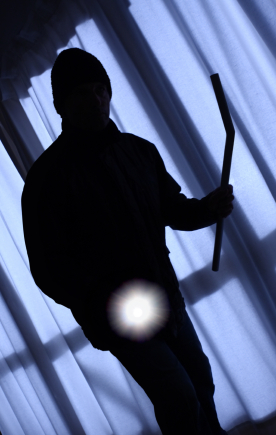 Bikes are kind of like dogs. You play with them, you take them places, you feed them and get them new accessories. Sometimes you take them to the vet. If they’re not working out, you put them up on craigslist so a new family can enjoy them, or drop them off on a farm out in the country where they’ll have lots of open space and chickens to chase. And sometimes they get old, their frames crack, and they die. Losing a special friend to old age is often sad and emotionally difficult. But what about when that friend is taken from you by force?

A man in Peterborough, Canada was bikejacked while riding home the other night. According to the report in the newspaper, the rider was approached by some dude who pushed him off his bike. Then the bikejacker rode off with his Trek 4300. A terrible way to lose your ride.If my car were stolen today, I probably wouldn’t give a crap. I’d file a police report and have the insurance company write me a big fat check. But if my bike were stolen, I’d probably quit my job and curl up in the fetal position and cry for weeks.

As cycling becomes more popular and cars become more expensive, bike culture will become increasingly less civilized. How long until there are chop shops dedicated to stealing bikes and parting them out on eBay?How long until someone pulls a gun on you and demands that you surrender your S-Works Stumpjumper FSR Carbon? Hopefully it will never get to that point. But in light of chronic bike theft, reports of bikejackings, and urban trail systems popping up, it might make you think twice about riding through the rough part of the town forest.

Does anyone have any stories about bike robbery?

If you lock your bike up outside, invest in a real lock. A buddy and I in college each had a lightweight chain and padlock to lock up our BMX’s while we were in the dorm/class. To save time we’d often times lock several of our bikes together. One morning we woke up and found that two bikes (which had been locked together) were gone. One was a $600 2 week old DK. $600 is like your life savings when you’re in college. The thieves had use bolt cutters to cut through the chain. They must have been interupted, because my chain had been cut into, but not all the way through. It was cut so deeply that when I picked up the padlock to undo it the chain broke in half. I got LUCKY.

If you’re renting an apartment/house, get yourself some renters insurance. It’s crazy cheap, mine was only $144 for a year. It will replace your stolen property, even if it wasn’t stolen from your house. So, if someone jacks your bike off your car rack while you’re at work, the insurance company will cut you a check to replace it.

I’ve seen many a post on Craigslist from people looking for their bikes or offering a reward for information. Don’t be fooled by where you live, even if you think it’s safe. I’m not one to profile (ok maybe when it’s obvious) but I’ve seen plenty of folks riding around town on bikes they can’t afford when it’s obvious by their uncleanliness, personal hygiene and the stuff tied and strapped to the bike since it’s their mobile home. But these people aren’t buying $400-$1000 mtn bikes, road bikes or beach cruisers. Best advice is to get a GOOD lock and USE it. Not something that can be clipped with pliers or unscrewed from the seat post and the plastic snaps right off. Thieves are brazen. As far as trail riding and getting jacked, always best to know where you’re headed and if possible, take a friend riding with you. Locks and the Buddy system are always good deterrents.