“Imaginate” takes you inside Danny’s childhood mind and all of the things that he always wanted to do on a bike. Thanks to Red Bull footing the bill and giving him a completely blank slate, Danny was able to transform an old warehouse into a larger-than-life version of his bedroom and completely give in to his imagination!

Two years in the making, this might just be the most creative bike video of all time. 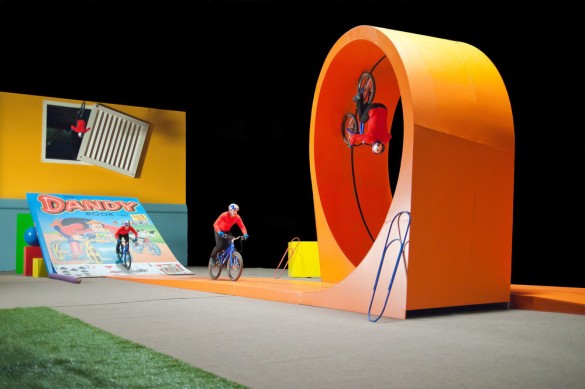 Your Turn: So what did you think? Is this Danny’s best video yet?

This video rocks! Dude is a fantastic rider, but there are people just as good (or maybe even better), but his videos are just so well done, they’re not just about the riding. Cool idea behind this one.

Check these guys out. Keep in mind none of them have brakes!! There’s lots of other great riders out there too. The 2nd video, of Tim Knoll, is really crazy. Not much big super dangerous stuff, but talk about technical!! He’s doing some really inovative stuff no one else is doing, we’ll be seeing more of him for sure.

Really enjoyed the videos, Tim Knoll is amazing and original.

Tim Knoll reminds me of Rodney Mullen (skater…search for his ‘best of’ video. whoa!)

Love watching that guy, it’s not humanly possible what he does on a bike. Jedi Master!

Wow…that IS the coolest bike video ever. Way to go Danny!

Love the concept! And of course, what a rider!

I loved bringing the imagination of the kid (that was me) to life. Awesome riding. I need to get an exercise ball. That looked cool……and a tank!

That was so cool. loved the toy box concept. Amazing!