Never mind the astounding riding in Hood River, just driving through the Columbia River Gorge eastbound from Portland to get there is a treat in and of itself. Whether buzzing down the riverside interstate, skirting up over the old highway, or winding your way down the Washington side, not getting sidetracked by the natural beauty of this Oregon Wonder is not an easy task. On that note, if you’d like to snap a selfie or two in the gorge, but are overwhelmed by the options, might I suggest a quick stop at Multnomah Falls after Vista House along the Historic Columbia River Highway in Oregon. Both are right off the road and en route to the trail. Now, on to that trail!

Whoopdee is a true loop of just under 10 miles and, judging from the downhill sections, is best ridden counter clockwise from the parking lot trailhead. However, there’s no signage indicating that you can’t ride it clockwise. After skirting the first bit along a ridge, the trail dives deeper into thicket where you encounter the series of small to monster-size “whoops” this trail was named after, plunging you straight down before an immediate and equally large punch-in-the-face climb back up the other side.

Singletracks user Levite92 describes Whoopdee much better than I ever could:

“This trail was nothing like the other trails I’ve ridden in the gorge. It starts you off by surfing and carving well-thought-out berms and hitting the occasional speed section. Close to the bottom of the trail you find yourself challenged with very friendly yet incredibly steep creek drops (which, fail or not, are super fun). After the wooded section that follows the bottom of a valley you wind into a rather exciting clearing with a melody of light jumps and tight turns. The trail ends by heading uphill along a beautiful hillside that will captivate you so much you won’t remember you’re riding uphill”. -Levite92

As disappointing as it may sound, ending the ride with a nearly two-mile climb is more than bearable. The climb is moderately-wooded, offering both shade and glimpses of the gorge and, if you ride Whoopdee in late spring-early summer, you’ll have the company of a pride of yellow wildflower and lupine along the way.

Occasional views of a distant Mount Hood is too tempting to not give pause and take it in, despite the nice flow and speed of the trail. At just around 10 miles, a second lap really hits the sweet spot if you haven’t planned another ride. Chances are, it’ll be that fun, you’ll want to do it twice, regardless.

Access to Whoopdee is generously allowed by Stevenson Land Company (SLC)–manager of over 90,000 acres throughout Oregon and Washington, primarily for timber harvest–so from time to time the trail, or portions of it, will be re-routed or closed. Check with Dirty Fingers Bicycle Repair or The Gorge is My Gym for any and all Hood River trail statuses. Local MTB clubs (www.hrats.org) have worked hard to establish an amicable, trusting relationship with SLC so as always, when in someone else’s sandbox, play nice.

StumptownRider, a longtime local who knows a thing or two about winding down after getting thoroughly whooped, stops in at Big Horse Brew Pub in Hood River for the fish tacos and a Pale Rider.

From Interstate 84, exit south onto the Mount Hood Scenic Byway (35) and drive for 2.3 miles, where you will turn east onto Whiskey Creek Dr. A half-mile later, turn left onto Eastside Rd., followed by a quick right onto Old Dalles Rd. Drive up Old Dalles for about four miles, and the parking lot is on the west side. Across the lot you’ll see the trail, but this is where riders exit if doing the preferred counter clockwise loop. Follow the dirt road south on bike another 0.25 miles, where the trail starts to the left. 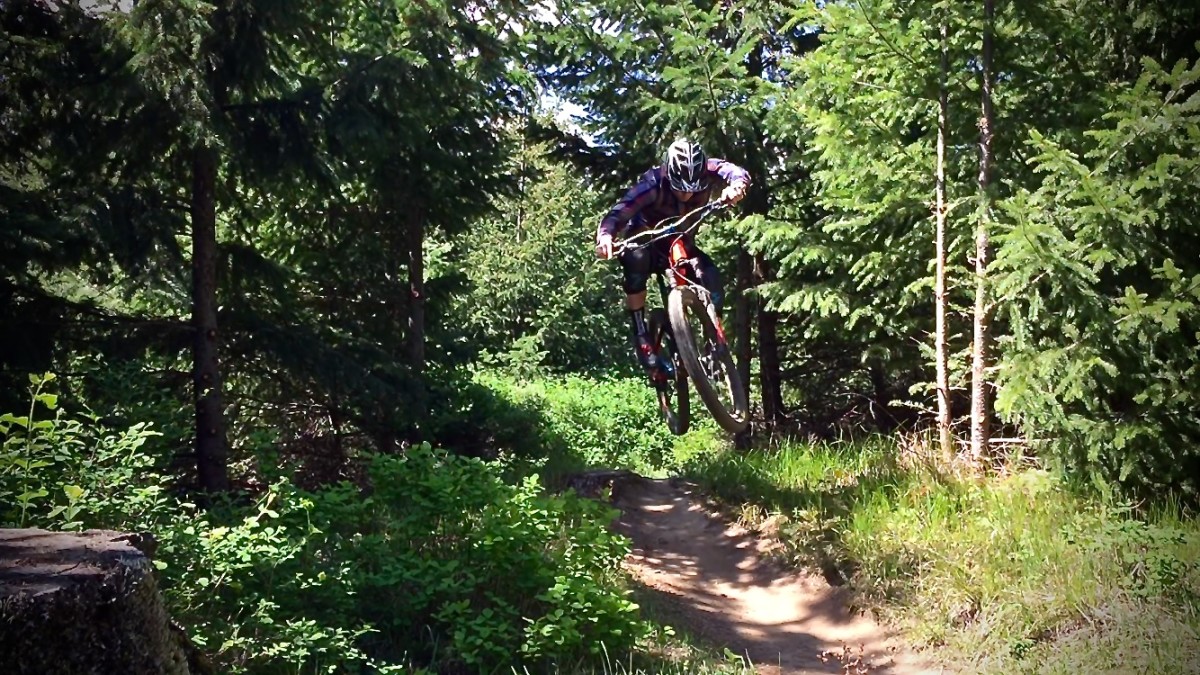