Like most mountain bikers, I’ve ridden countless miles of gravel/dirt roads. But I’ve never ridden a gravel-specific bike. When Western Spirit Cycling Adventures offered a gravel trip in the Sawtooth National Forest outside of Ketchum, Idaho that features camping at a different natural hot spring every night, AND Revel Bikes loaned me a sweet ride to boot, I had to acknowledge that the stars had aligned. It was time to give it a go. I had to actually TRY the thing that I had made a cottage industry out of dissing (hot tip: it doesn’t pay. You’re welcome.)

At the meet spot on day one, I pulled the sleek, sexy Revel Rover off the back of my car and slung all my crap to the two guides lashing bags to the top of the truck amid cries of “Oh shoot! I left my glasses/keys/bike shoes/etc. in that bag that looks like all the other bags that is now buried four deep!” I wish that I wasn’t one of those voices, but you know I was. They were eternally patient, though likely hurling colorful internal curses.

There was another Western Spirit truck in the same lot, loading for another trip. An all singletrack trip. On all e-bikes. A small tear gathered at the corner of my eye and I stifled a sob. It was also full of handsome men. Probably all single. And rich.

I turned my attention to my crew, a lovely group of nine riders and the aforementioned two guides. I’ve been on loads of supported trips with different outfitters and this was the first time that both guides were female. That made me smile and forget that dumb group with cheater bikes across the lot.

Somewhere around the middle of the five-mile climb to Dollarhide pass (9,301’) that comes after the 21-mile warm-up climb, I started my usual internal pissing and moaning about this and that. Why’s it so hot? Why aren’t there more gears on this thing? Why has my right pinkie finger hurt ever since I got it? And suddenly it was over. I was at the top. Well, that wasn’t so bad…

An expertly prepared lunch and learning about my riding partners reignited my desire to live. The guides discussed the descent to come, one of the most “technical” of the trip. I scoffed a little to myself—it’s a ROAD—how technical could it be?

Thirty-nine feet later with my rear half up in the air, and my front half down in the drops so I could actually brake—I stopped and lowered the saddle. With a tool. I wondered sarcastically if gravel riders also club their dinner to death before cooking it over an open fire. Saddle lowered, looking slightly less like a backward giraffe toppling off a ledge, I proceeded.

Now, I fancy myself a pretty good mountain biker. In particular, I’m a pretty good downhiller, though admittedly under a very narrow set of circumstances including-but-not-limited to: no right-side drop-off; no baby-heads; no loose/janky; temperature 75 degrees; mercury in retrograde; etc. and so on. So surely I’d shine now that my ass was no longer hovering over my teakettle.

Well, not so much. I squealed and tiptoed my way down that descent like I’d never sat atop two wheels in my life. The older couple on the gravel tandem passed me. The guy from D.C. who rides bike paths passed me. The guy who’d just done “Unbound”—the 100-mile gravel race in Kansas—passed me so fast I thought he was one of those floatie things in my eye.

Humbled and scrambled, I rolled into camp after a smooth, fast and mellow descent that made me forget the bone-shaking terror of my first gravel DH. In fact, I was confounded to find that I wanted more miles. The roads in the Sawtooth National Forest deliver one to and through a landscape that is iconic and quintessentially Western. The scent and swoosh of pine, a fresh, tinkling stream running adjacent to a ribbon of road that stretches up and over the horizon in a mesmerizing, tantalizing call to discovery. And as if that were not enough, nature here seems to be trying to one-up itself. In addition to soaring peaks and verdant meadows, fissures in the earth send up great gusts of super-heated water into crystal clear creeks where we humans can soak gravel-rattled bones.

Days two through five gave me a glimpse of the Zen-state that gravel geeks seek. A good stretch of Goldilocks gravel is a fine, fine thing. It is not too deep, not washboard-y, has had a light rain on it within the last five hours, and passing vehicles are rare, yet polite. When in this zone, the miles clip along and you can daydream about the fish in the stream, which type of IPA is best, or which of your children will get you the most in trade for a sassy new gravel bike (with a dropper).

Western Spirit never disappoints with routes, knowledgeable (and fun) guides, and certainly not with food. While it has been scientifically proven that food in camp is better than any Michelin-starred eatery, the spaghetti, lasagna, salads and the Dutch oven brownies were in a league of their own. Camp on the last night was outside the “town” of Atlanta, population 25. My new gravel comrades and I made use of The Beaver Lodge and the libations on offer there before riding in a wobbly fashion back to camp, with a long and luxurious soak in a bathtub-temperature mini-lake midway.

Would it be extremely uncool to say that the best part of the gravel trip was the flight out? This wasn’t just any flight, not a United or Delta trip with its TSA, cattle herding and the attendant urge to Never. Fly. Again. No, we left camp on the last morning after a hearty breakfast sandwich, loaded all but day bags onto the truck. and headed for a hot spring soak en-route to the Atlanta “airport.” On foot.

The airport consists of a slightly sloping field with a fully operational bright orange windsock, flapping lazily southward. Two six-seater Cessna’s circa 1970 sat squatting in the grass. Guide Brittany had been charged with driving the truck, 12 bikes, bags, etc. four long, slow hours to the Hailey airport and Laura would fly with us. Laura was fairly levitating with excitement, this surely being the only Western Spirit trip that ends with a bush plane ride over the mountains. That little sky-tractor scooted down the runway with pluck and gusto, becoming airborne with ease and a stumpy grace.

Half an hour later we landed in Hailey for our final 12-mile bike path ride back to Ketchum. Now, gravel grinding is not for everyone, but if you’re looking for a great introduction to this relatively new craze, a supported adventure, a visit to the Sawtooth National Forest, and a chance to relax in a natural hot spring after a long ride, this trip definitely checks all of those boxes.  I don’t have any children to sell in order to finance a new Revel Rover*, so if you see me on one in the Colorado hinterlands, it’s because being a cycle-journalist has at last made me a millionaire.

Trails
Bikepacking and Previewing the Sierra Valley's Connected Communities Project
Trails
Ride Like a Local: Sun Valley, Idaho [Podcast #295]
Trails
A Panhandle Mountain Bike Ramble in the Land of Famous...
Trails
Roaming and Resting in Scotland via Mountain Bike is as...

Thanks for riding with us Mo! And for such fun reporting 🙂 This is one of our oldest Western Spirit itineraries “tweaked” a wee bit for today’s gravel riders. If it looks like something you’d enjoy check out the deets here and book your spot for summer of 2023. 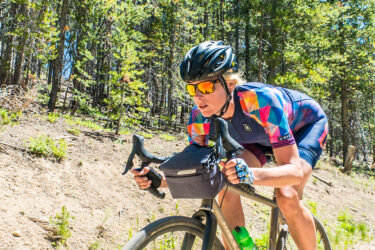