This summer I was blessed enough to take a week-long vacation to Colorado with my wife and a couple of our friends. Over the next few weeks I will be writing about all of the amazing singletrack I got to shred while I was out there.

We spent a couple of days in Loveland while hanging out with some friends that live there, but unfortunately I was only able to hit one trail in the area. I chose the Foothills Trail just outside of Fort Collins as my sole bike ride for a couple of reasons:

Now, while it was Andrew’s first time jumping on a mountain bike, I wasn’t too worried about him. Andrew is an amazing athlete who spends a lot of time running, swimming, playing soccer, ultimate frisbee, football, and most importantly, road biking. I was pretty sure that he would be up to the physical challenge and that the technical challenge of riding a mountain bike would be the biggest obstacle he would have to overcome.

So, I chose the Foothills trail. According to all of the information I could gather here on Singletracks, this would be the easiest introduction to singletrack riding in the region.

Right at the beginning of the trail, it was about as easy of a singletrack introduction as you could hope for: hard, smooth dirt out in the middle of a grassy field… yeah, it doesn’t get much easier than that. 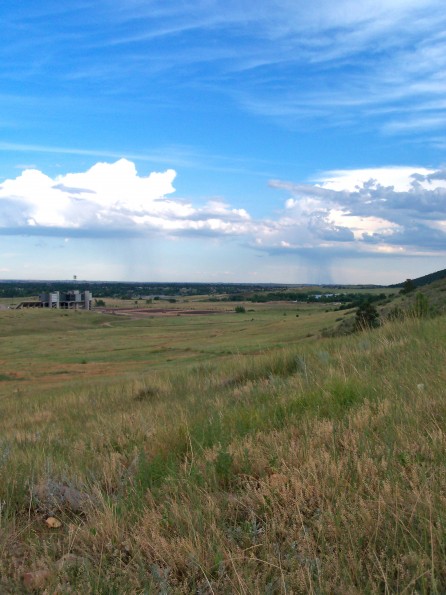 There were even signs along the trail at crucial intervals that gave you tips on how to mountain bike. This is really intended to be a true beginner trail. 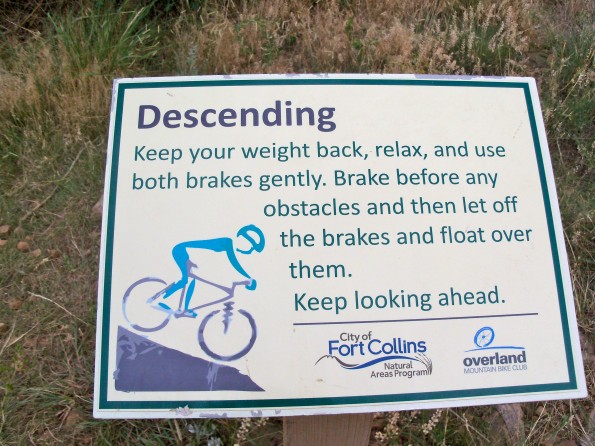 But pretty quickly, the trail steepened and started climbing in earnest. As soon as it tilted upward, the trail filled up with rocks of all shapes and sizes. 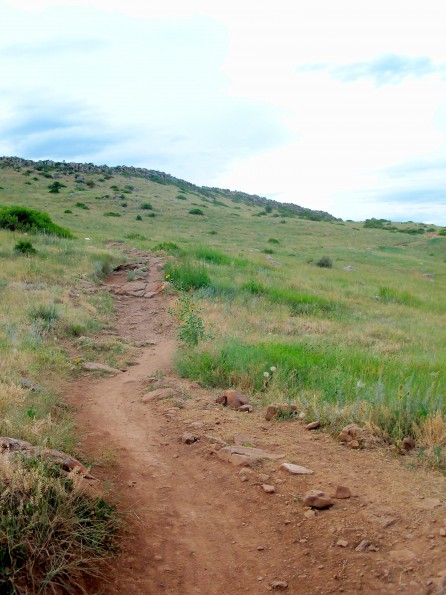 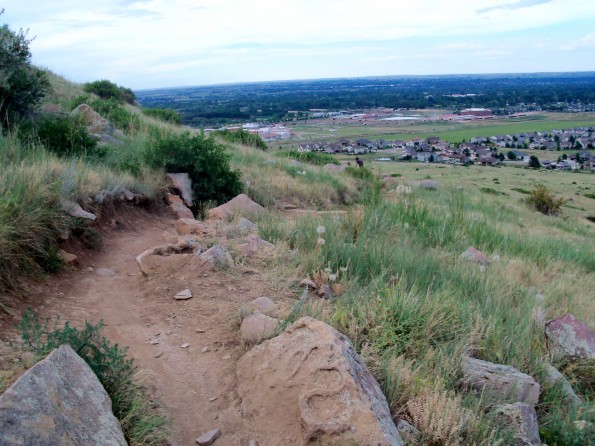 I found that none of these rocks were very difficult to negotiate, though. The Foothills trail obviously receives a lot of tender, loving care and many of the rocks had been used to transform the trail into a cobblestone climb. Others were easy to ride over or avoid.

Andrew didn’t find them so easy, however. Trail obstacles that I found rather entertaining but not challenging, he found dangerous and painful. Fortunately for him, as soon as we finished with the steepest portion of the climb the rocks mostly disappeared and the trail smoothed out again. 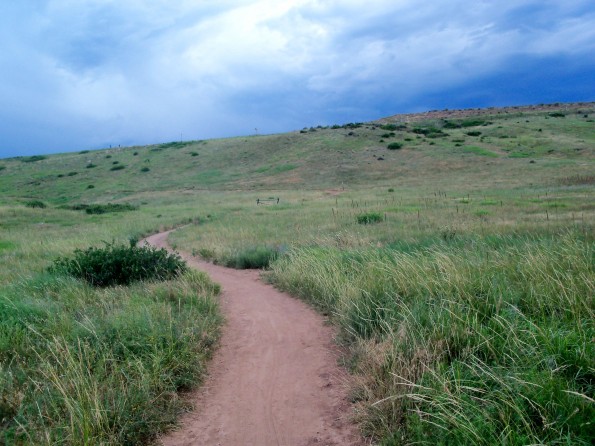 We topped out on a paved road lying right on top of the ridge, but when we crossed over we were struck by a sight that neither of us really was prepared for, despite all of the reviews that I had read: 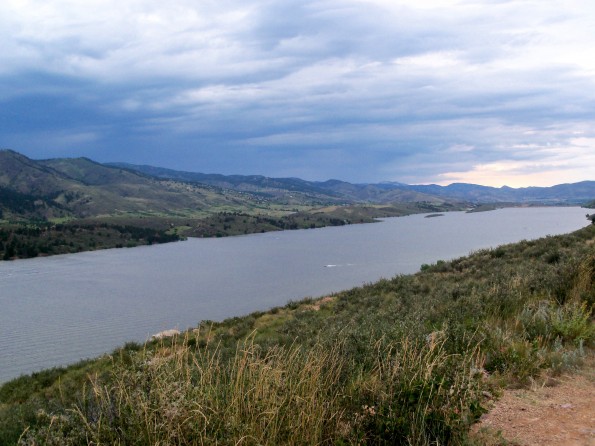 The view of the Horsetooth Reservoir was absolutely breathtaking! The trail even turned and began to parallel the reservoir, quickly dropping into a rocky descent along its bank. It was so hard to keep my eyes on the trail with a view like this distracting me! 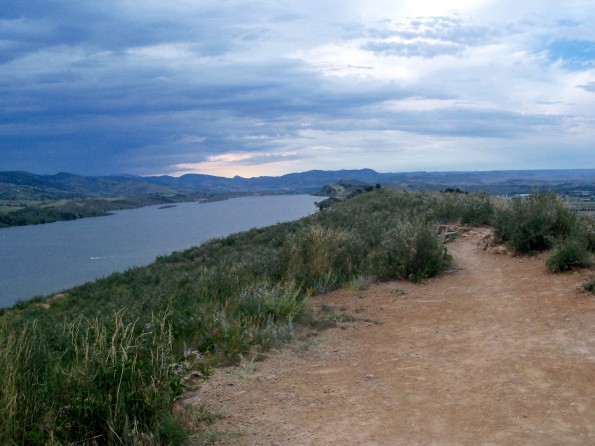 Shortly after we made the turn to parallel the reservoir, we decided to turn around and head back to the car. Our stomachs were both ready for a serious dinner, and we could see and feel foul weather enshrouding us from over the mountains to the west. 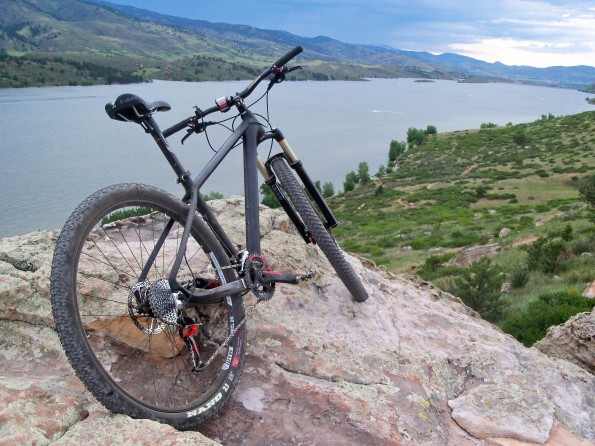 On our way back down to the car, we caught one of several spurs leading to an overlook. From our vantage point we could see rain falling in a dark curtain from what looked like a very innocent, lonely cloud floating out over the plains. There are some things you just don’t see anywhere but the Rockies! 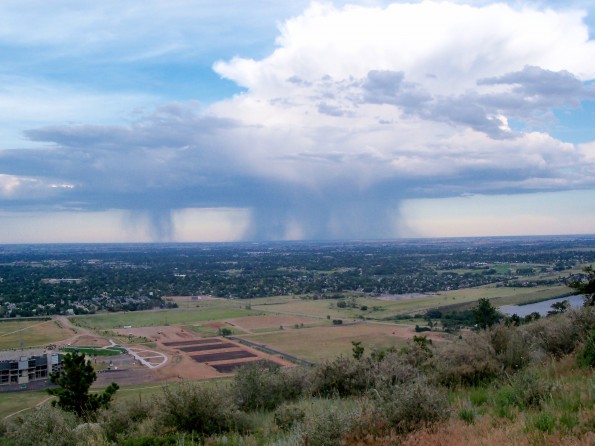 Right after we turned off the first short downhill stretch from the lookout, I heard my rear tire begin to buzz in the chainstays and just as I looked down my rear end began to wash around all over the trail. First ride of the trip, rain closing in, dinner waiting, and I had a flat…

5 to 10 minutes later and I was back on the trail, ready to shred down the side of the hogback, and hoping against hope I wouldn’t flat again in the series of rock gardens coming up! 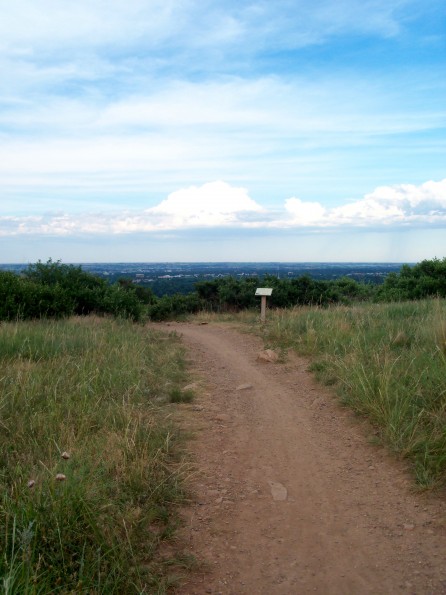 Fortunately, everything went according to plan and I shredded the snot out o that rocky downhill! It felt so good to be on the bike, feeling the tires gripping the tacky dirt in the corners and hearing the chain slap as I pounded over the rocks. 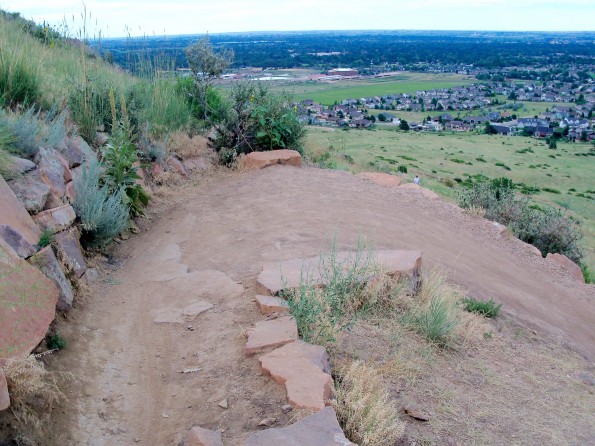 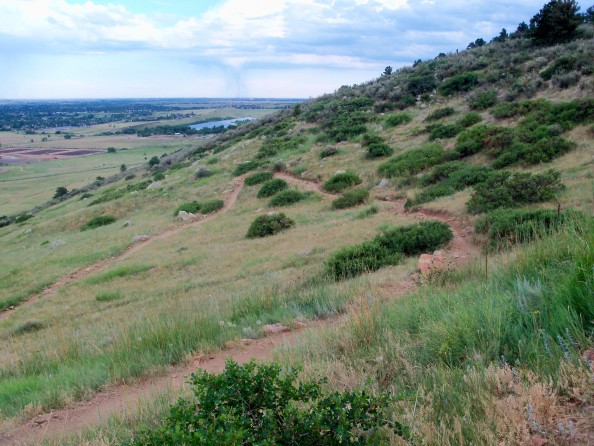 This trail receives a fair amount of traffic from riders, runners, and hikers, and this was especially evident during my downhill ride. Still, despite all of the traffic, the descent off of the hogback reminded me why we had traveled all the way out to Colorado to ride… and the best was still to come!

Coming up: 4 days of mountain biking in Crested Butte!

Yeah, I noticed that bike too. Good lookin’!

I live in Fort Collins and love this trail. Maxwell trail, which is the one that heads up behind the stadium, is great and is the staple ride for the Overland Mountain Bike Club every Wednesday night. It’s cool to see my local trail being written up! Let me know when you are out here again.

Will do, although it may be a while! You guys have a real abundance of singletrack on the Hogback between Loveland and Fort Collins… I wish I could spend a week there and just ride it all!

I love living in FoCo