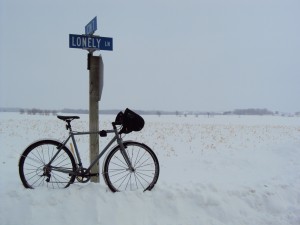 Yup, it feels that way sometimes.

When Jeff sent me the email informing me I was picked to be on the Singletracks blog team, I almost turned him down. At the time I sent in my application I was living in Philadelphia, a 15 minute ride from the sweetest trails imaginable in Fairmount Park and I had a stable of bikes in the garage to suit my mood on any given day. But by the time his email came I had moved to Madison, Wisconsin for a new job without a single bike. I was living in a hotel (still am) and didn’t even know where the trails were. But I’m working on it.

Seeing as it’s winter in Wisconsin at the moment, hitting the trails isn’t in the cards right now so I’ve done the next best thing: I bought a bike that will be my workhorse and jack-of-all-trades: a 2011 Trek Gary Fisher Collection Presidio cyclocross bike. I chose the bike for the sweet steel frame and great 2×10 drivetrain but most of all for the ability to mount fenders. Bad weather and wet roads have never been an excuse to keep me indoors so I wanted the bike to be ready for anything. So on went a pair of fluted Velo Orange aluminum fenders and now me and the bike stay nice and dry (well, drier anyway). When the snow started coming down I was happy to have a good headlight for visibility and the Bar Mitts to keep my hands cozy.

On my first ride in over a month it felt great to start getting back into shape for when the snow melts. I’ll be using this cyclocross bike as a commuter, a light off-road steed, and an around town bike to tackle the snow covered trails that tie Madison’s neighborhoods together. Today I got in 35 chilly, hilly miles doing a dry run on the route I’ll take when I start commuting to the office. It’s humbling to realize how little time I spent in the big ring, but after a winter lazy spell you’ve got to start somewhere.

Since the cold, snowy weather will be around for a while longer (so I’m told by the locals) I’ll have some non-singletrack posts to fill the time until the thaw. I’m almost through reading the book Bicycle Technology and a review will be up soon. I’ll also be starting an MTB-specific strength training program to get pumped for the season. Hopefully between that and my cyclocross miles I’ll be ready for the dirt in short order.

And the sooner I can ditch this gear, the better. When the snow is flying and the wind is blowing, the less skin exposed, the better.

I want a CX bike. And you’re hardcore! That is all 😀

Much like yourself I can’t wait for all this snow to disappear. Granted i haven’t been riding, I have been climbing indoors and hiking with my dog when it’s warm enough for her.

Luckily you do have some wonderful trail systems within a few hours and a little further. CAMBA in the Cable/Hayward area to your North, Minneapolis/St. Paul has a lot of riding, Levis-Trow Mounds towards Eau Claire… so much to choose from depending on how far you’re willing to drive.

As phranquy mentioned, you’ll find that once the snow melts the riding in Wisconsin is pretty good! I grew up with Levis Mounds literally in my back yard and can vouch for the sweet singletrack there! Also I believe there are several great systems to the east of you a bit.

Good luck with the rest of the winter! Might be time to buy a pair of downhill skis….

[…] Central Cyclery of DeKalb, IL was on Memorial Day weekend. I’m new to the midwest, own a badass new cyclocross bike that has helped me stay in trail shape during the off season, and have a healthy disregard for […]

[…] what you want to hear about, right? First a word on the setting. I moved to the midwest (in winter. great idea) for work and have been trying a little of this and a little of that to get my fix of […]

Sweet winter gear. I’ll be looking into some of that this Fall.