There are many elements to successfully riding a difficult technical obstacle like a high skinny, but one that doesn’t get much attention is when and where to focus your eyes.

I’ve found that vague reminders like, “Eyes ahead!” or “Don’t stare at what you’re trying to avoid!” are nearly useless. My brain is just not wired to respond well to those commands, even if they’re coming from me. But if I’ve got something specific for my eyes to focus on, my brain gets interested. So before I ride a difficult skinny, I look for visual markers like a rock, a stick, a notch, a weed, an edge of something, etc., specifically planning where I’m going to be looking.

The Browner Stockade Skinny at the Hillside Park MTB trail in Elk River, MN is one of the most difficult in the Twin Cities Metro area. Before I attempted this skinny, I walked it and settled on four different visual markers: the top left edge of three upright logs, plus the left edge of a rock slab at the end: 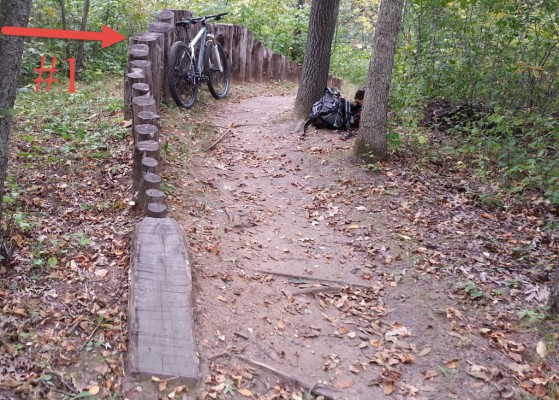 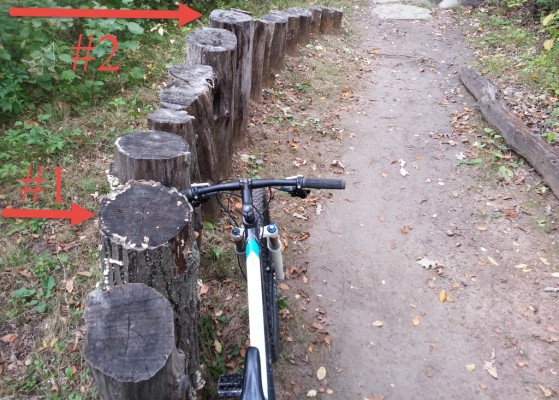 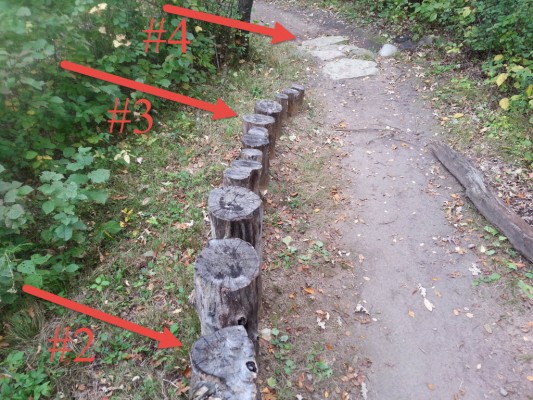 I chose the extreme left edge of the three logs because with the skinny’s gradual curve to the right, the tracking of my 29er’s rear wheel left little margin for error. Focusing on the left edge of the rock slab beyond the skinny at the end was important in order to help me stay on track for the slightly-sharper bend to the right created by the last three small upright logs.

Since I knew I’d be going very slow, I anticipated that as I got to within 3-4 feet of each visual marker, I would shift my eyes to the next one. And since I knew I was likely to be tense during my attempts, I planned to also use each visual marker to remind myself to take a deep breath and exhale slowly.

I walked the skinny three times, mentally rehearsing all this before I attempted it. When I got back to my bike, I also closed my eyes and mentally rehearsed it. Even then, it took a dozen attempts before I cleaned it. Here’s a one-minute video clip:

Like any new skill, it takes some practice to get better at focusing your eyes on specific points. The good news: with a few planks, you can do this in your yard or neighborhood, even if you only have a few minutes to practice. Here I’ve got three planks of increasingly narrow widths lined up end-to-end. As I get to within a few feet of the first plank (yellow marker), I shift my eyes to the edge of the next plank (red arrow) and so on till I either fall off or clean it: 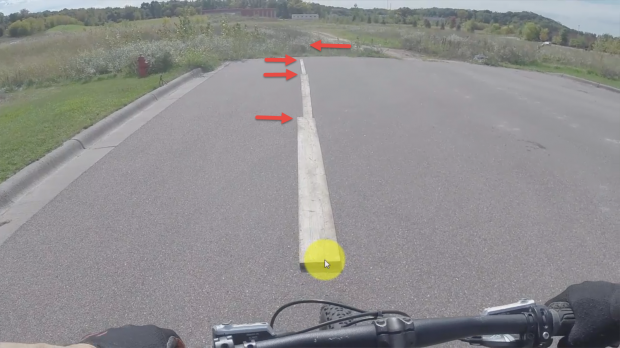 In the photo below, I’ve got a plank perpendicular to the edge of a curb, with the front edge propped up on a rock and a second rock on top of the middle of the plank, both for additional difficulty. The four red arrows are the focal points, with the first two being obstacles. My brain wants my eyes to lock on those “danger” points. The challenge, of course, is to not look at each one as my front wheel approaches it, but rather to focus on the one beyond it, evolutionary instincts not withstanding. 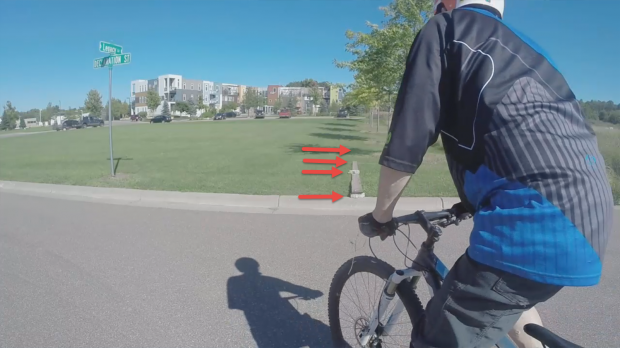 The “Holding a Line” video series

Last month’s article on Singletracks, 11 Drills for Holding a Line: Gain Confidence on Skinnies and Narrow, Exposed Terrain, focused entirely on learning side-to-side bike/body separation. I’ve created a video for that, as well as for this month’s topic on focusing your eyes. I have two more videos in the works for the “holding a line” series, covering:

To be notified when these videos become available, subscribe to my free Thick Skull Mountain Bike Skills newsletter.

Great article. The concept of selecting and tracking by reference points is right on. Of course, just doing that takes a lot of dedicated practice.

Great job on that obstacle . . . that looks like a doozy!

The real trick becomes developing the ability to select those reference points on the fly on a trail you’ve never ridden–kind of like improvising vs. composing.

Good point about improvising on the fly. Next year I plan to compete in some regional enduros and that’s exactly what I’ll need to get better at if I’m going to somewhat marginally adequate. 😉

Agreed, that obstacle looks tough–nice riding and good job breaking it down for us!

There’s another component to riding that type of skinny that I’d like to write about: the skills to practice to minimize the chance of injury for when you fall off it. As you can see from the video, I don’t have the skills perfected yet!

That was bad ass. I noticed how quick you could dismount and save yourself using platform pedals.. I’d be petrified with feet clipped in..

Yep, me too, spartan. I’m always on flats these days.

Unbelievable! Well done! This is the only feature I could not clean in Hillside and you’re a first person I see who managed to ride it. Gotta train harder

Hey thanks, stumpyfsr. There are now 3 known riders to have cleaned it since Rich Ray Brown was the first, which is why it’s known as The Browner. And a couple weeks after I cleaned it, a guy named Mike Samson cleaned it.

FYI, this MORC forum discussion thread is the main one where it’s discussed:
http://www.morcmtb.org/forums/showthread.php?45314-Trails-with-the-most-technical-features

Typo: His name is Ray Brown, not Rich Ray Brown.