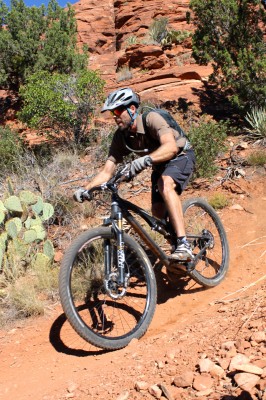 I spent my entire week in Sedona riding, shooting photos, drinking beer, and generally hanging out with Matt McFee, owner and founder of Hermosa Tours. I learned a ton about Sedona and the local riding scene from Matt, but I also got to hear a lot about Hermosa Tours and Matt’s story. I knew I had to sit down with him for a Beginnings interview.

Our “Beginnings” series documents how professionals in the mountain bike industry got their start, both in mountain biking in general and working in the industry in particular. Read on to find out what it takes to start a mountain bike tour company:

Singletracks: When did you first start mountain biking? How did you get into the sport?

McFee: Let’s see here… I bought my first mountain bike when I was living in Canton, Ohio… I don’t call it mountain biking, I call it hill biking. It would have been 1992. I bought a 1992 GT Tequesta, fully rigid. There was a couple of us, me and these two other guys in Canton, Ohio… I go back now, and it was 3 miles of trail that felt epic! But I quickly got hooked. I picked it up, and those guys had already been biking for a year or more, but we just all started going on a regular basis. I used to have a ’73 super beetle and I actually put a fork mount into the top of the bug so I could strap my bike to the top of the fork mount. Yeah, just kinda really got into it.

And we just started taking trips. We’d take a trip up to Vermont or down to West Virginia, and then man, I graduated college when I was 22, and went out to Colorado and [rode] all around Colorado… let’s see, Breckenridge, Vail, Winter Park, over to Moab, Durango–that’s where I really got exposed to mountains and that sorta thing.

When did you start working in the industry? How’d you get started there?

I mean, . . .when I started Hermosa Tours. I came from the software industry of all things. So I wasn’t in the industry at any point, but it was kind of driven by two things. One, it was something I wanted to do. There’s always the guy in a group of friends who is like the planner, who always plans trips, puts together all logistics, routes, lines up all the shuttles, lines up everything–and that was always me. Mostly mountain bike trips, but even like backpacking trips or, you know, whatever. That was always me. I always liked to go explore new places and especially if I could explore a place and then bring friends back and put all the logistics together. I just loved taking people out and showing them places. And it’s kind of funny, because here I am seven years later, and it hasn’t changed much. Whether it be super-advanced riders or beginner riders on a dirt road or whatever, just to get people exposed to different areas and different kinds of riding. People come off the trail and they’re just like ridiculously stoked, it’s kinda still that simple. I mean I like running the business and I like building something or whatever, but at the end of the day it’s just taking people out for a ride and seeing them be really stoked on it–it’s fun. And you’re catching people on their vacation man, you get some pretty happy folks.

So that was kind of the main drive. The other driver was I had an awesome job making a lot of money in the software industry, and I hated it. I just didn’t want to do it anymore. And so kind of the writing was on the wall. I knew I wanted to do something else, I knew I wanted to do something outdoors. I’d also moved to Durango, which I always say was my best and worst decision. It was my best decision because it leads to today, but it was my worst decision because I got there and I spent one summer out in the Durango high country and immediately I was poisoned. “There’s no way I can continue to work in the software industry, this is SO beautiful! I have to come up with some way of being out here more long term and more full time.”

So did you just dive in all the way with the tour company, or did you like start it on the side for a while?

No, no, so that’s like my personal philosophy of burning the boats. When Cortez hit the new land and he hit Mexico and he knew he had to fight the Aztecs, he burnt all the boats so that there was no retreat. And so I did the exact same thing.

I started Hermosa Tours, jumped in, and absolutely burned the boats: quit my job, gave myself absolutely no retreat whatsoever, and just 100% jumped in. Yeah personally I just think it’s the only way to do it. It’s just like a personal philosophy. Because you can half do something and have one foot in and one foot out and see if it works. I’m sure people can accomplish that but at the end of the day I think there’s no better way to give yourself inspiration and to make yourself work hard than if you have to, you know. So I totally burnt the boats and jumped right into it. And in terms of jumping into it with what I thought were good ideas and good ways to go about it, I screwed up more times than I can count. I always say I have a whole shelf with a bunch of dusty, shitty ideas. I’ve tried so many different things. That’s also kind of a part of my philosophy: don’t be afraid to try something new. If it doesn’t work, just move on. And like I said I have a whole collection of bad ideas that seemed like really good ideas at the time, but didn’t work out.

Could you give me a 30-second run down of where you are now and what Hermosa Tours has going on?

Let’s see, it’s 2014, so 2010, really 2011, we made a switch. At the time it wasn’t a major tectonic shift, but we came up with the idea of doing self guided tours, where people are riding on their own, they’re cooking for themselves, but we’re just plugging in the logistics of a really nice camp that we move down the trail. We launched with a four-day trip on the Colorado Trail near Durango, and immediately the response was like nothing else we’d ever done. So we started quickly adding trips. We started the Kokopelli and it immediately picked up and so I knew we were on to something. At that point–it wasn’t immediate, but overall we’ve shifted quite a bit of the company into just doing self guided trips. You know, it’s an avid rider who knows what they’re doing, doesn’t need a catered, guided trip. It’s easier to talk five of your friends into a $400 weekend than it is a $1,200 week. If you’ve got 10 friends and one of them makes good many and he can afford the guided, catered trip, it’s hard to get the rest of the guys. But everyone can pitch in for a $350 or $400 weekend per person, and go off to these places and do cool rides. Just ride into camp, and there’s a big deluxe camp with your beer, your food, your tent, you know, and everything’s setup: firewood, water, chairs, everything’s ready to go. We just keep moving the party down the trail. So that’s really like 80% of what we do now. But we do do day tours out of our two locations, which are Durango, Colorado and here in Sedona, Arizona, and those are both good, healthy businesses. We still do custom guided trips, like we’ll get private groups of 5-10 or whatever who want to do a custom amount of days or custom trips. We still do plenty of that. But in general, the heart of what we do are those self-guided trips.

Awesome, well thanks so much Matt, and thanks for showing me around Sedona!

If you’re looking for an epic self-guided mountain bike adventure in the Western US, be sure to check out the trips that Hermosa Tours has to offer! 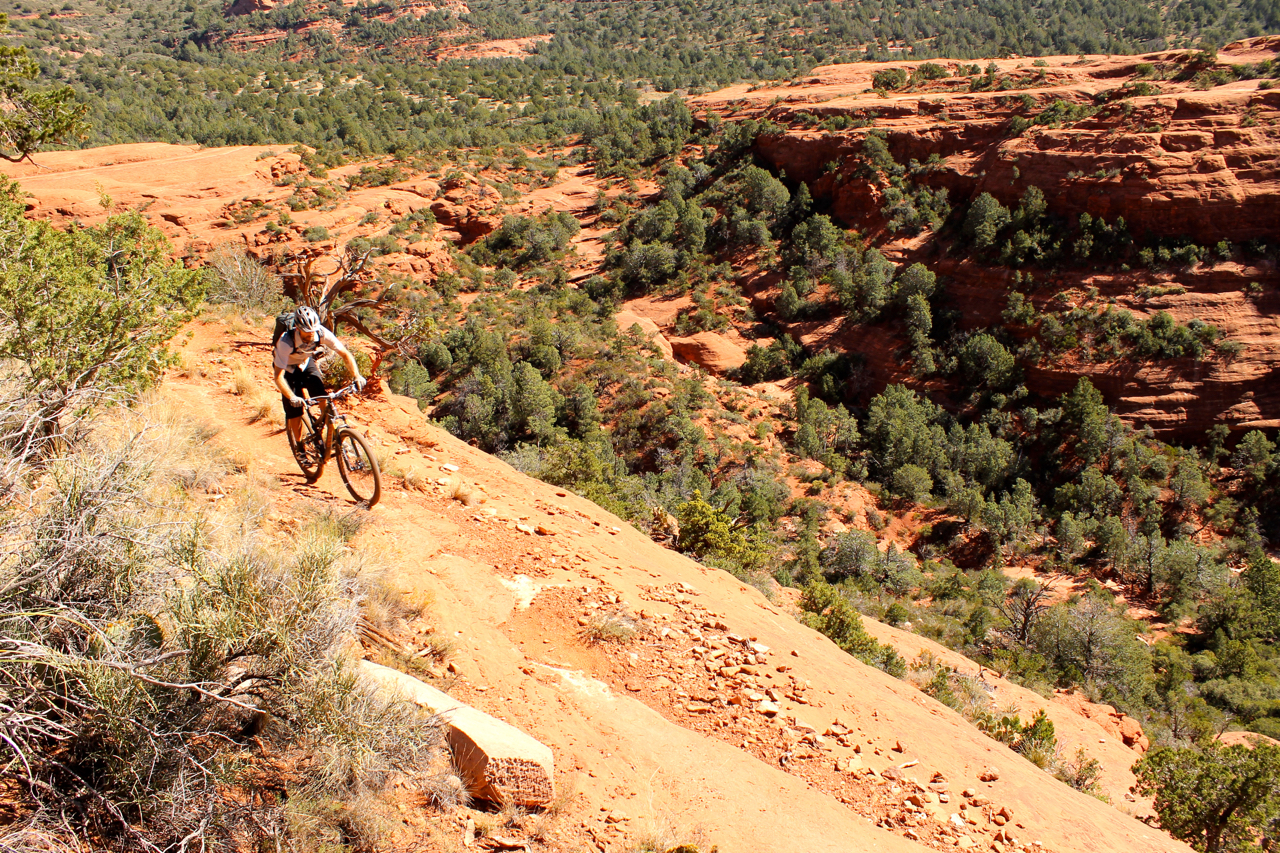