In October of 2015 Adam Creager of Brandon, Florida purchased the 5,000 lumen SolarStorm Bike Light, a cheap Chinese knock off light. After just a couple of uses, the light’s battery pack caught fire, and burned his home, gutting the inside.

We had actually written about the SolarStorm on Singletracks some 10 months before this incident  (read that article here). Jeff didn’t actually receive the SolarStorm light, and his article was primarily about the ordering difficulties.

Then, in order to complete his review, Jeff ordered an Image 5,000 lumen bike light, which is technically not from the same company. However, it is a similar style of construction to the SolarStorm, and is also a cheap light from China.

During his review of the Image light (read that article here), Jeff noted corrosion on his battery pack after only a couple weeks of use, and mentioned, “if the connector corrodes/rusts too much, this could be a spark hazard.” He discontinued use of the battery pack and light shortly after completing his review, due to the potential fire danger.

Unfortunately, this worst-case scenario became reality for Adam Creager. Here he tells his story, in his own words:

Singletracks: “Where are you from Adam?”

Adam Creager: “We live in Brandon in Florida, right around the corner from Alafia and Boyette. We have some awesome riding man! The first thing everyone says is, ‘I can’t believe these trails are in Florida! They’re amazing!'”

Can you walk me through what happened, from the beginning?

I used it a couple times. I was just charging it for the second time; we were having a local get-together and everyone was doing a little night ride, and I knew I was going to go riding that night. I was riding in the morning and riding in the evening. Before I left in the morning I charged the light, hooked it up, left it, and then just went riding.

I came back three or four hours later, went home, and downstairs—I have a two-bedroom condo in Brandon. I came home—I keep my bike inside because we don’t really have any other place to put it, so I was cleaning up my bike, and I remember the alarm going off. I went upstairs—I didn’t really think anything of it. I forgot I had the light charging, and I knew I wasn’t cooking anything, I hadn’t been home, I just didn’t think it was a big deal. I went upstairs, and I looked around. I didn’t immediately see anything, but I could smell it. I went from one room to another and I started hearing something. It was the light—it was exploding. It had fallen somehow.

I had it charging on the little stool between a recliner and my computer—it was, you know, like a little man cave, we hung out there a lot—that’s where a lot of my stuff was and a lot of my wife’s stuff. I heard something cracking—it had fallen somehow from the stool itself and it had fallen behind the lazy boy. I noticed just a little flame and a little smoke coming from behind the lazy boy itself. I didn’t really know what to do—I kinda panicked. I ran around in circles for a split second and then I ran downstairs and I grabbed a bowl, filled it up with water, and I threw it on the fire. It really didn’t do a whole lot. I thought I honestly could put the fire out, I really did. I ran downstairs and—can’t really remember how many times I ran up and down, I know it was at least twice. But the last time, I remember I threw the water and I was just like, “I have to start getting stuff out. I’m never going to put out this fire.”

By the third time I got up there the fire had grown so much, and I could hear the light—it was continuing to explode.

It was the battery exploding?

It was. With those, the way it works is you charge the battery pack, and then you unhook it from the charger, and you hook it up to the light. That’s how it powers itself. It has a really, really, really, big battery pack, and it’s got four large cells that were batteries. They were just wrapped in plastic—it really looked like a stick of dynamite. That’s pretty much what it looked like.

I could just tell those were exploding. It was so loud, and the explosions just were so bright. I could just tell it was the battery–it was bouncing around and it was just doing all kinds of crazy shit.

Last time I went up the fire got so big, I wanted to get some stuff out, but I couldn’t. The smoke was so thick I could barely breathe. I just went downstairs and got whatever I could out. I had pulled my bike in, so I just threw that outside. I went back to get some other stuff and—the homeowners, the guy who does the maintenance there, he lives just across the street, he just happened to be outside and he saw me coming outside, and he knew what was going on. He was just like, “just don’t go back inside.” He said, “don’t go inside, please don’t go back inside,” and he ran over and cut the power off to the unit—to all the units—and then we ran and knocked on the doors to all the neighbors and asked them to get outside, because I didn’t know how big it was going to get. I didn’t know if it was going to affect anybody at the time—it was large. I just wanted to make sure nobody got hurt.

We got the neighbors out, and then called 911. [The] ambulance came, fire trucks came, everybody came. [They] put the fire out [and] made sure there was no other fire. Then the fire marshal came out and did his thing—made sure everything was out, questioned me about what was going on, [and] took information down about the light. He saw the light, he saw the charger–he saw it all. He’s the one that picked up the cylinders and was showing me the cylinders from the battery. That’s how I knew. . .I could see what the battery was all about, because it was all over the place. He wanted to see the light—I pulled it up on my phone and he took a picture of it, because he was really curious about it. Did his thing, and they were gone.

The fire had burned one room—but the heat and the smoke was so bad that it basically destroyed everything that we had on the second floor. We had stuff that was just covered in black soot. 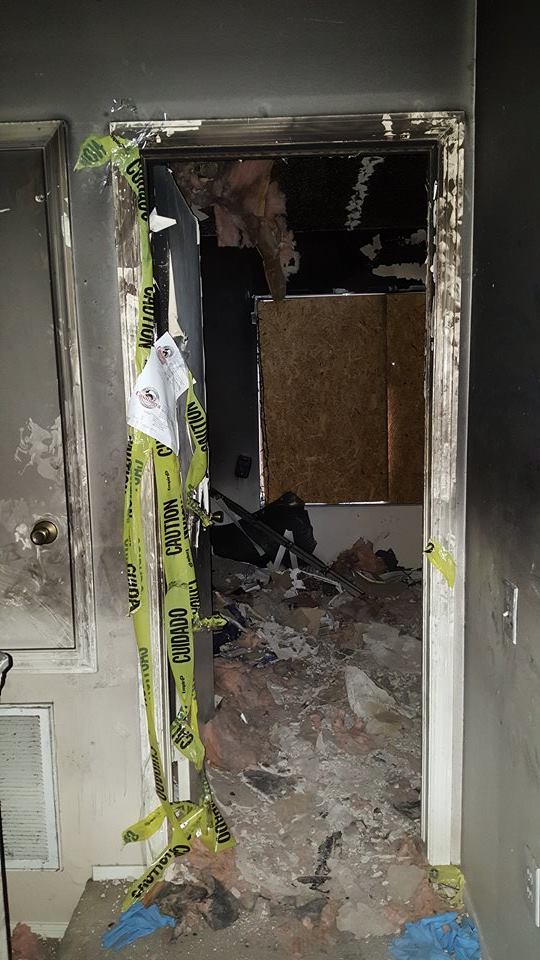 Are they going to have to tear down the condo and rebuild, or what are the next steps there?

They’ve got a construction crew that’s gonna come in, and I’ve gotta get all the junk taken out—I think that’s going to happen this week. They’re going to gut the inside, and redo the entire—the shell is ok. They’re just going to have to do the walls, the roof in that one room—well, the walls and the roof in a few rooms upstairs, and re-drywall the entire place—paint it. Everything cosmetic they’re going to have to redo in that place—carpet. . .[and all the walls upstairs]. It was so hot in the other bedroom. One bedroom obviously was completely burnt. The bathroom in the master bedroom, it was so hot you could see the nails from the drywall–they were protruding from the actual drywall itself from getting hot and cooling off. 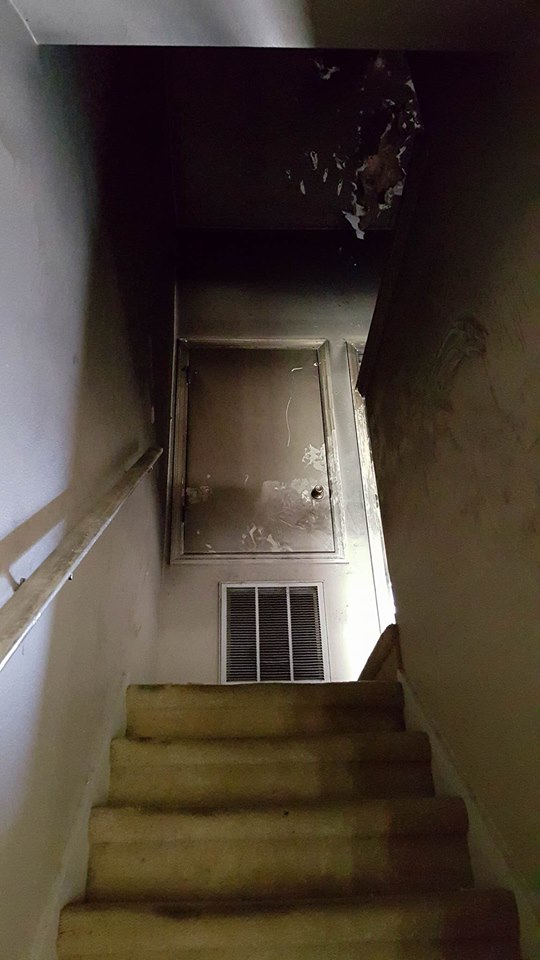 We had just gotten married a year ago, almost to the day. It happened on October 29th, and our anniversary is on November 2nd. 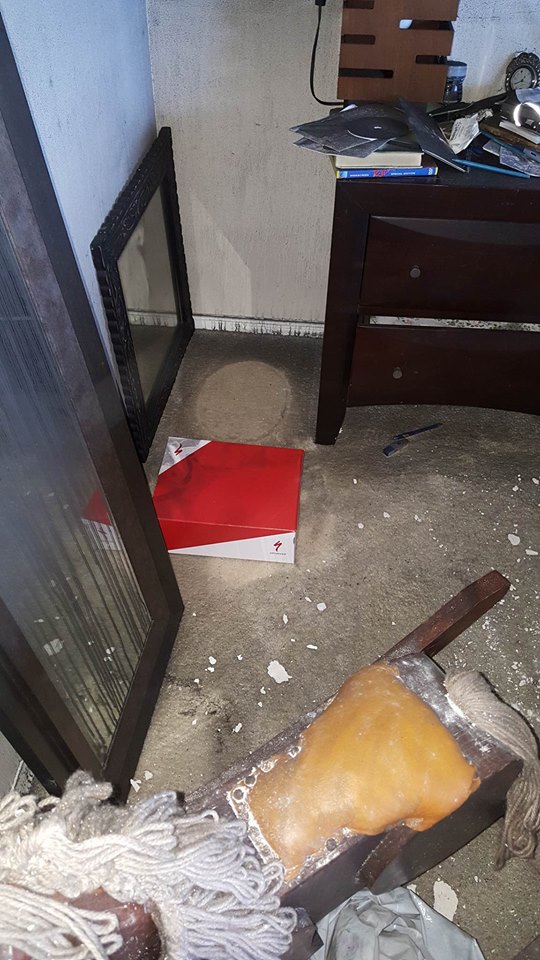 Man that is a sucky anniversary gift.

It was. We made up for it: we went to Orlando this weekend and got a chance to go to Epcot and just get out of town for a couple of days. I work a lot, and her and I kinda work different schedules right now. We had some time off, so we went to Orlando and spent some time away, which was really nice.

The good news is I had renters insurance, and I had a good policy. So far they’ve taken care of everything.

So just to confirm, this was the same SolarStorm light that Jeff had reviewed on Singletracks?

Yeah I don’t know if you can check but there was an article. . .I could check the date of the shipping, but I want to say it was in September. It was an article, something about a $20 light, something like that. I’m almost positive it was you guys.

(Editor’s note: Jeff originally wrote a pair of articles about cheap lights in early 2015, but we had re-shared them on Facebook around September. See the introduction above for a short recap of Jeff’s coverage of these lights.)

Yeah we did an article like that. But it was the same model that was in that article, then?

It was. The exact same. 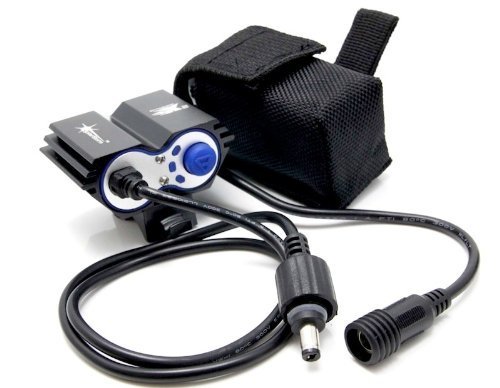 So how has this changed the way you’ve looked at lights and battery-powered devices, if any?

Completely different. I won’t be cheap when it comes to stuff like that. I can tell ya, I will definitely do research before I put stuff like that in my house anymore. You know, I got a new light—one, because I wanted to have a bike [light] and two, because I needed a flashlight because we needed to see in the house. All the lights and everything got burnt upstairs so we couldn’t see anything. [The new bike light] is how we got around, because we had to go through all of our stuff. So I spent some time—I ended up getting a Light & Motion. I’m just going to put way more time and effort into stuff like that.

What advice would you offer to prospective light buyers out there?

Learn from my mistakes, and understand that they should always take the time and research any product that they put in their house, instead of just buying it because it’s inexpensive.

Any other thoughts Adam, or anything else you want to mention?

You know, it sucks. I just wanted to share this with you guys [because] lights come up quite a bit in biking and cycling, and I just wanted to make sure that people understand what they’re dealing with, take the time to do their research, and make sure they don’t go through the same thing I’m going through.