The HoldUp is Yakima’s best-selling hitch rack. Considering how easy it is to use and how fast you can load and unload bikes, that’s not surprising.

Yakima offers the HoldUp for vehicles with either a 1.25″ or 2″ receiver. For $449, you get the ability to carry two bikes. Should you have a 2″ hitch, you can also add on the optional HoldUp +2, that expands the carrying capacity to four bikes. The HoldUp +2 will run you an additional $329. 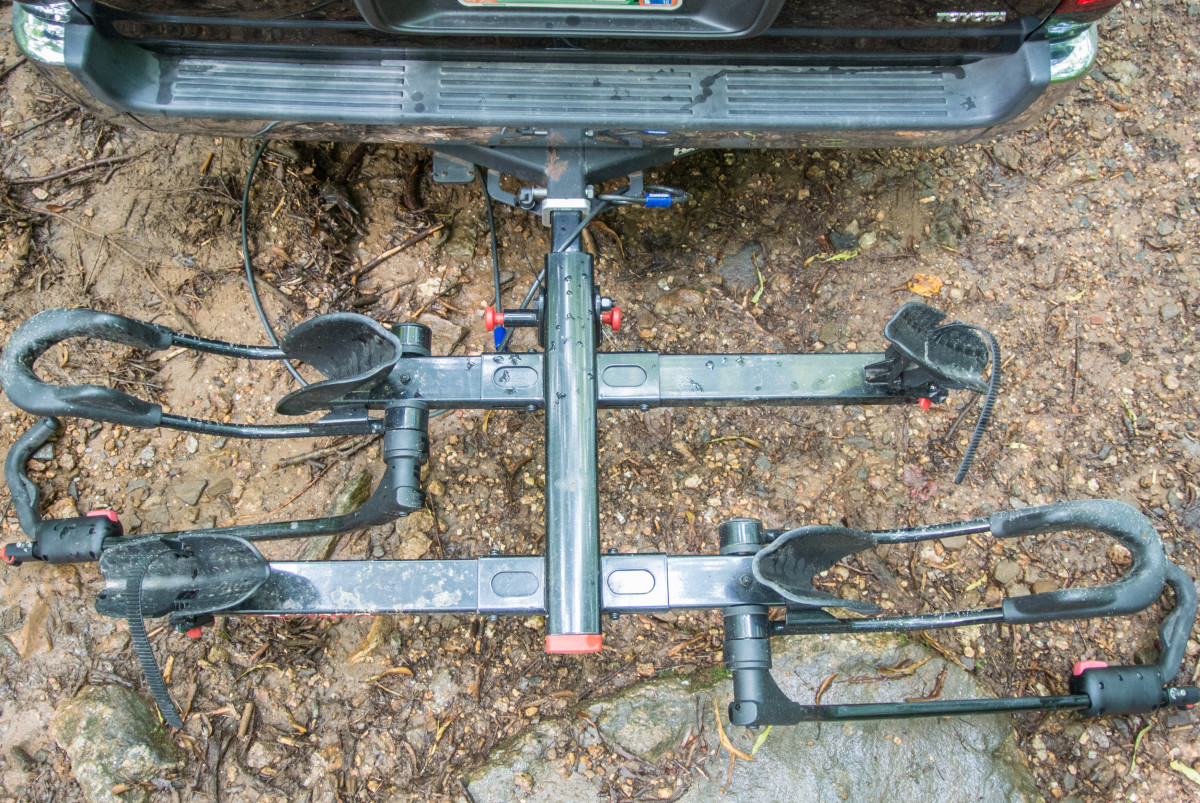 There is some assembly required with the HoldUp, but it’s a simple affair. There’s no giant bag of parts, just one big bolt for mounting the base into the hitch, and then eight small bolts that then mount the trays to the base. Yakima even includes wrenches in case you don’t have your own. In all, it took maybe 15 minutes to unpack and assemble the rack. And once you have the whole thing together, removing it from your vehicle is relatively easy. Just unthread the hitch bolt and slide the entire rack out. At 50 pounds, it’s easily manageable by one person. Each tray is rated to carry up to 60 pounds, which is miles beyond the weight of a modern mountain bike. It’s nice to know that the rack is built to take that much weight though.

Should you decide to expand your carrying capacity to four bikes, the HoldUp +2 plugs into the end of your base rack. Doing so will add another 50 pounds to the weight of the rack, so taking the four bike carrier off would be more cumbersome.

If you’re like me, you don’t mind a few battle scars on your bike–they add character. But scratches, dings, and gouges from stupid things like shitty bike racks, suck. For this reason, many manufacturers have developed racks that don’t make contact with the bike’s frame. The Yakima HoldUp uses an adjustable arm that clamps down tight over the front wheel, which allows it work with wheel sizes from 20″ to 29″, and I was even able to fit plus-sized wheels (2.8-3.0″ tires) too. For the rear wheel, there’s a little tray with a ratcheting strap.

Yakima also includes integrated cable locks, with lock cores, on the HoldUp for extra security. They wouldn’t stop a determined thief, but they would help your bike from getting ejected on the highway if the arm somehow failed. The cables could use a few more inches of length to help them reach around more frames though. In any case, I always carry a heavy duty cable and U-lock in my truck if I’m going to be leaving bikes unattended. Never rely on stock locks to protect your ride!

The HoldUp folds up fairly compact when not in use. The arms fold in over the wheel trays and the entire rack can then be tilted up into a low-profile vertical position. That helps reduce the overall length of your vehicle, handy for parking. One thing to note is your license plate will most likely be covered up by the rack when it’s tilted upwards, which could potentially get you pulled over.

You can also tilt the rack downward for access to the rear of your vehicle. However, on my Toyota 4Runner, I could only open the hatch partway before it made contact with the handlebars on the bikes. A longer arm on the base would solve the problem, but it would also add to the overall length of your vehicle.

Fold the arm outward, put the bike in the tray, and rotate the arm upward over the front wheel. Push down on the arm to lock it into place, and strap the rear wheel in. To remove the bike, unstrap the rear wheel and release the arm by pressing the red button on it. That’s the long and short of it, but there are a few things to note/consider.

In order to for the bike to be as secure as possible, you must get the arm as close to the fork as possible. If you don’t, there will be some side-to-side play with the bike in the tray. You’ll also want to make sure you aren’t mangling the brake hose guide on your fork with the arm. I didn’t damage any bikes, but the rubber on the arms is showing wear where they contacted the guides. On a related point, bikes with fenders or front racks may not be secure on the HoldUp since you can’t get the arm to butt-up against the fork.

When I set up my trays, I slid them as far to opposite sides as possible. This turned out to be a good strategy as I only had to adjust their position one time. Thankfully, it was just that one time, because loosening all the bolts is tedious. It would be nice to see an easier way to adjust the trays side-to-side, but I’m guessing this was the most secure option.

I’ve been using the HoldUp for a few months and I’ve been impressed. It’s solidly-built and feels like it will last for years to come. Should something happen, Yakima has a good reputation for their customer service and offers replacement parts for just about anything that could potentially wear out. The only durability “issue” I had was with the pin that you pull out to tilt the rack up or down. It’s attached to the base via a steel tether, but Yakima used a plastic rivet. That rivet quickly broke, so I zip-tied the pin to the base.

When it comes to price, the Yakima presents a good value compared to the competition. To carry four bikes with Yakima will cost $778; the Thule T2 Classic runs $700 but the newer T2 Pro is $950; the Saris Freedom SuperClamp is $800; and 1Up USA’s rack is $967. 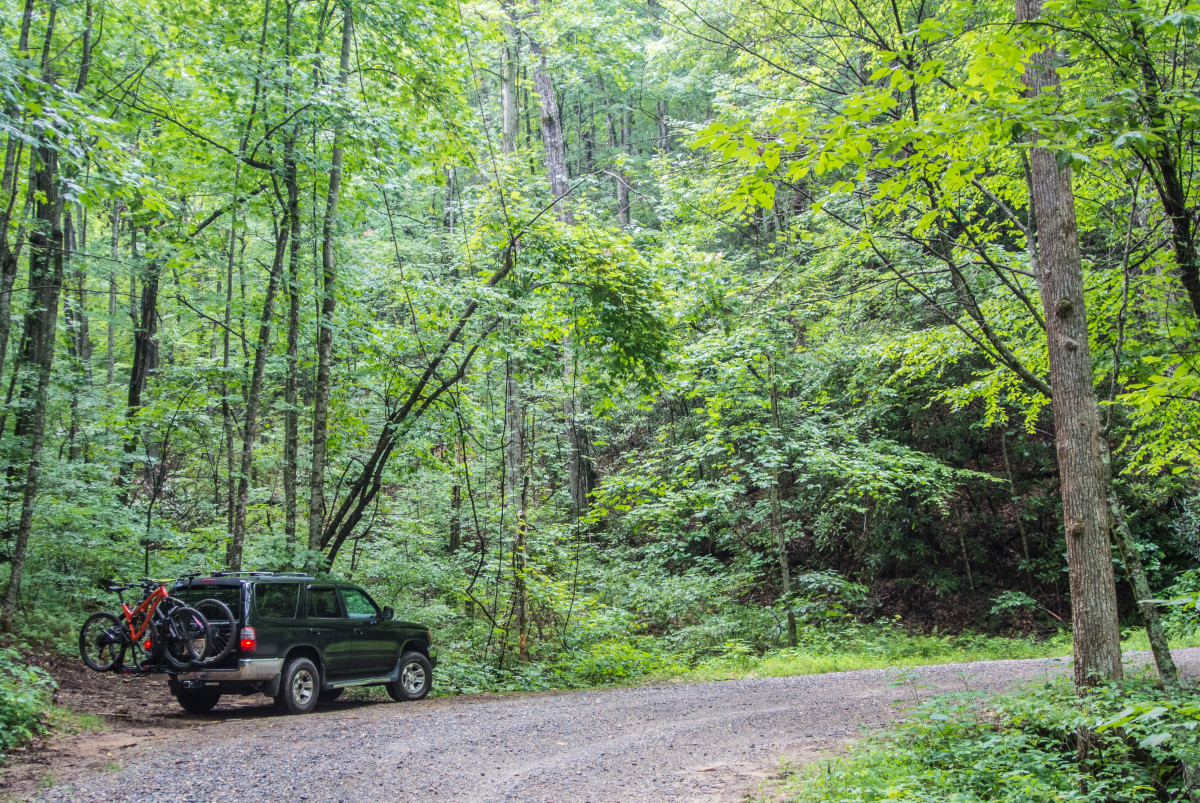 In terms of function, the Holdup is very similar to the Thule T2, and Saris uses a slightly modified version of the same design on their SuperClamp. Undoubtedly, there will be comparisons to the 1Up USA rack, since it’s the creme de la creme of the rack world right now, so here are my thoughts on that. I’ll admit that 1Up’s mounting design is a more elegant solution than the Yakima on paper, but I’d argue that in practice, the HoldUp is faster to use when dealing with more than one bike. I know from personal experience that there’s plenty of fiddling around trying to get bikes situated on the 1Up, and I didn’t experience these same issues with Yakima’s rack. The HoldUp is also more compact than the 1Up when not in use. As for the wiggle-test, I’d say the HoldUp is just shy of matching the 1Up, with bike-jiggling only noticeable on very bumpy roads.

With it’s ease of use and quality build, anyone looking for a new hitch rack should have the HoldUp on their short list.

Thanks to Yakima for providing the HoldUp for review

No immediate comment other than I love how the rack is attached to an older 4Runner. (2nd gen owner)

Thanks! I actually just acquired it earlier this year after driving a Subaru for several years. I love it!

Got the same one this summer. Like it a lot. The back hatch hitting is def a case by case issue as my subi clears it with rack tilted. Prolly a problem for most SUVs. After a few months on mine I’ve found the arms not sliding as easy and they develop visible scrapes. They should put kashima on those things. As far as clamping on a mud guard, I just mash it on top and then adjust the guard before I ride. Mildly annoying, but not a huge deal. I compared this to Kuat and really see no diff in terms of performance unless you want the cheesy bike stand. Oh, did you not mention the bottle opener on the main/middle arm.

I had this rack for about a year and really loved it at first. It seemed really great until the pivots started wearing out. I would suggest they update it with a rebuildable pivot system and I would probably still have mine. When I mount it on the front of my truck camper setup I can watch the bike rock back and forth as I go from the gas to the break. I probably would have never noticed it on the back, but out front it’s right there to watch. I would get probably 10 inches of play in the bike. I don’t know about you, but I really don’t want thousands of dollars worth of mountain bike to fall off and get ran over. Maybe it never would have actually let go, but it just seemed to be a weak point. I did like the way the locks work. I’ve moved on to the Kuat and it has the stupidest locks ever. I guess there isn’t a perfect setup.

I’ve had mine for about a year and a half — love it! Typically use it on my BMW 330 and occasionally on my Cayenne. No tilt clearance issues with either vehicle. The directions I received from Yak indicated to clamp the arm down about 1″ in front of the fork, not against the fork. I’ve always done it that way and never had any stability nor rubbing issues, plus, the arm slides nicely under my mud guard (running a Mucky Nutz). Just for reference, I’m carrying a Santa Cruz Tallboy LTc. Great rack!