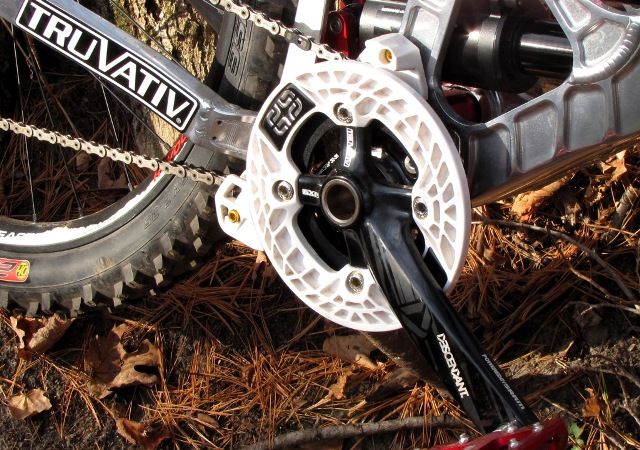 The Descendant crank arms are made from forged AL-7050-TV, the same material that’s regularly used in aerospace landing gear and bulkhead construction. The cranks share the same forging technology and design techniques as the Holzfeller but that’s basically where the similarities end. Truvativ managed to get the Descendant’s weight down to 822 grams which is especially impressive considering that the SRAM X9 crankset that I reviewed just a little while back comes in heavier at 845 grams. Sure the X9 has two chain rings but remember, the Descendant is made for the gravity crowd where parts have to be beefier, stiffer, and stronger. Just think about it – that’s about 240 grams lighter than the Holzfeller, 150 grams lighter than Saint, and 100 grams lighter than RaceFace Atlas FR!

Of course weight savings are great but they don’t mean squat if a crank can’t endure the abuse of DH and FR mountain biking. On any bike the crankset is the most important link between man and machine and it’s really a spot where you don’t want unnecessary flexing. Fortunately the Descendant over-delivers on the promise of high strength and stiffness (more on that later).

Another great thing about the new Descendant crank is the options that are offered. With three crank arm lengths (165, 170, 175mm) and two chain ring options (36 or 38) along with 73mm or 83mm bottom bracket options you’re pretty much covered. Now speaking of the bottom bracket (a sore spot for many cranks), the new Team GXP bottom bracket comes with Gutter seal technology and a new forged cup design. The gutter seal basically keeps junk out and reduces seal drag which means more power goes toward turning the crank instead of overcoming drag.

Unlike multi-ring cranks, the chain ring on the Descendant doesn’t feature shift ramps. Instead, the rings are machined from AL-7075 T and cut to a 4mm thickness so they’re still compatible with the present 8, 9, or 10spd systems. The chain ring is held in place with steel bolts and I opted to run an e*thirteen SRS+ chain retention system rather than risk bashing off the frame’s ISCG tabs. Although it might look better to show off the crank and ring, I decided to work with the strength of the crank’s spindle and bolted up the bash guard there instead. Besides, it’s cheaper to replace a bash guard than to replace a frame if the tabs get bent. 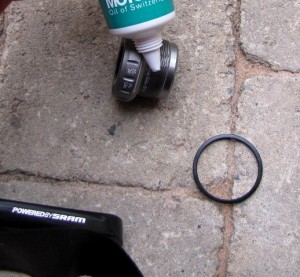 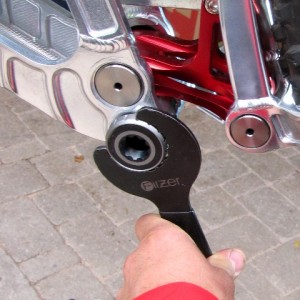 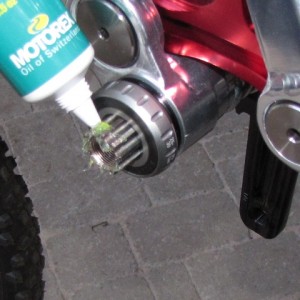 Installing the cranks was a piece of cake using a standard 16-notch external BB tool. Follow the easy to understand, full color instructions for proper spacer installation. Also remember to use a high quality grease to lube the cups before installation and add a touch of lube to the spindle before installing the non-drive side of the crank. As always, torque everything down precisely using a digital torque wrench like the D-Torq DX from Topeak. Remember, when it comes to torque, too much of a good thing is no good at all. 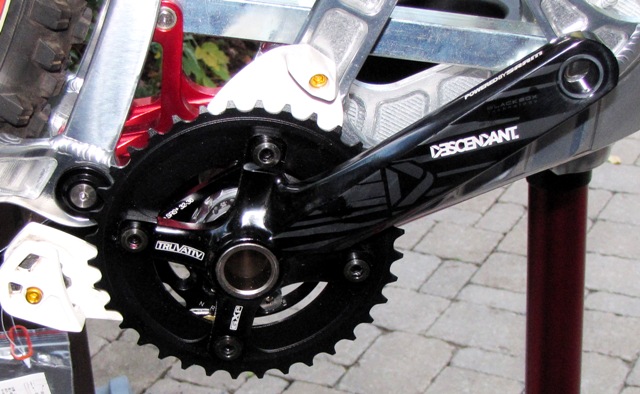 I was really impressed with the solid feel of the Descendant crank on my Banshee Legend II. While hitting step-downs and decent-sized jumps I immediately noticed the stiffness of the cranks upon landing. I had no worries about things bending because I really didn’t felt much flex at all. Even when pedaling hard on the flats the crank felt rock solid with zero visible wobble. Even after casing it a more than a few times and bashing the cranks on rock gardens, the cranks stayed straight with just a few scratches on the ends of the crank arms. 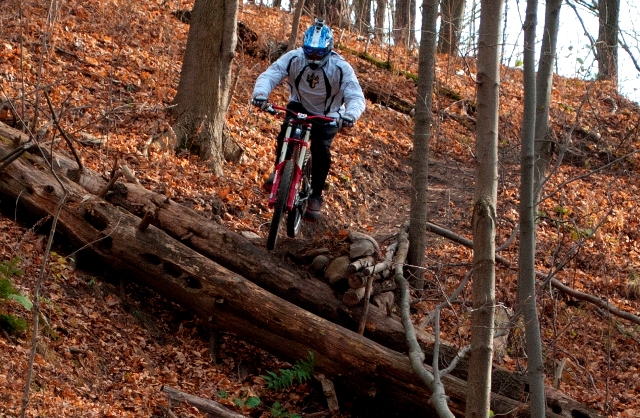 Let’s face it, if the Descendant crankset is good enough to carry pro mountain bikers like Peaty to 17 podium finishes, 7 world cup wins, and the top three places the 2009 World Championships, it’s good enough for you and me. At just $185 MSRP you’re getting a lot of crank for your money.

Thanks to the folks at Truvativ for sending up the Descendant crank for review.

That weight/stiffness combo looks like a good option for a single speed crank as well.

Such a sweet crank. I recon that’s gunna be the 1st choice for DH cranks in 2011. Some SRAM stuff is shit, but there’s a few really sweet parts in their lineup, including these cranks, code r brakes, 9sp X9 shifters and derailleurs.