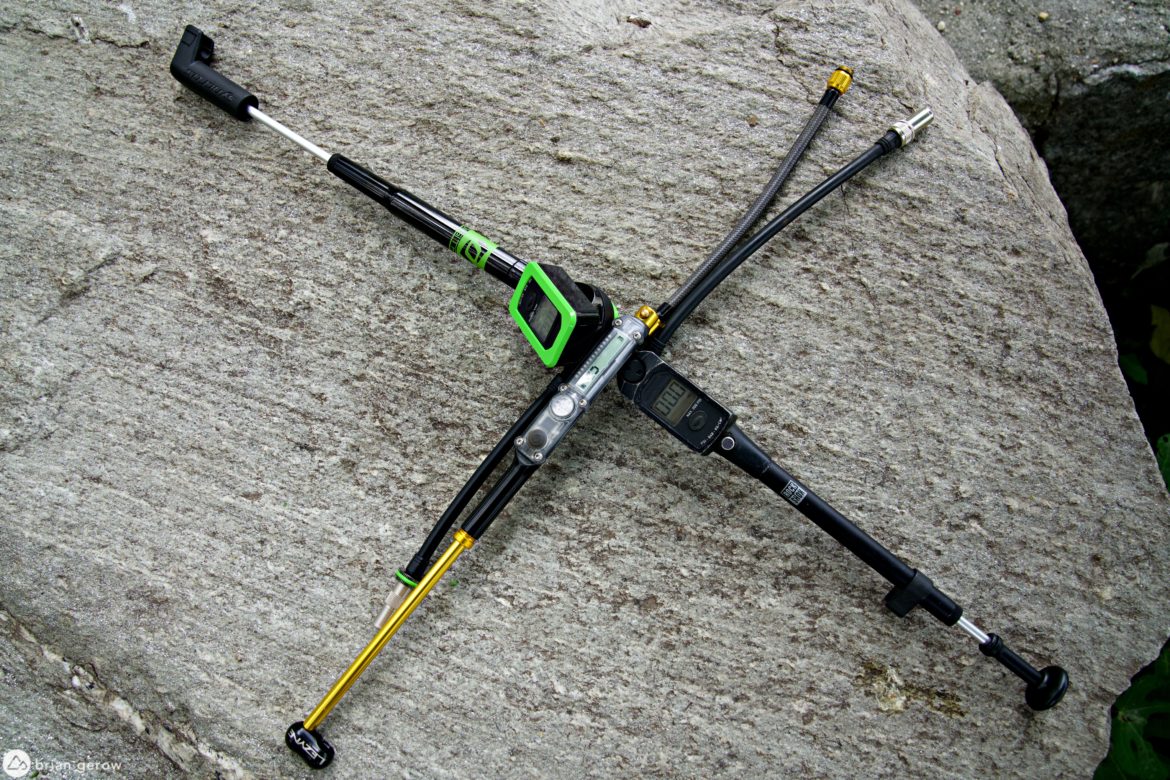 Digital shock pumps provide sharper pressure accuracy when compared to analog inflators. As riders are dialing in their suspension tune, or trying to maintain a specific squish feel, it is helpful to have a clear number to aim for rather than a hashmark on a dial that can be difficult to line up precisely.

While the pressure reading between different pumps can vary by 5-15psi (or more) on the same shock, the important factor is that a pump measures pressure consistently with itself. If the gauge reads the same number at the same pressure every time, it’s a worthwhile pump.

We recently took a look at three different suspension inflators to identify their strengths and faults based on pressure accuracy, ease of use, bulk, hose-pressure loss, and any additional features they may include.

For clarity, the hose-pressure loss is the amount of air that fills the hose and head of a pump when the air chuck is screwed onto a shock. That air is included in the pump’s pressure measurement, and it is the air that you hear leek out when you unscrew the pump from the suspension valve.

To determine how much of the pressure reading is lost when the chuck is removed we simply pumped a fork up to 110psi, removed the air chuck completely, then screwed the chuck back on to see what was lost in the process of removing the pump. Of course, the measurement is further obscured by the pump refilling the second time, but this process will give you a relatively accurate number to adjust your settings by. From there it is easy enough to account for this loss the next time we inflate the suspension. 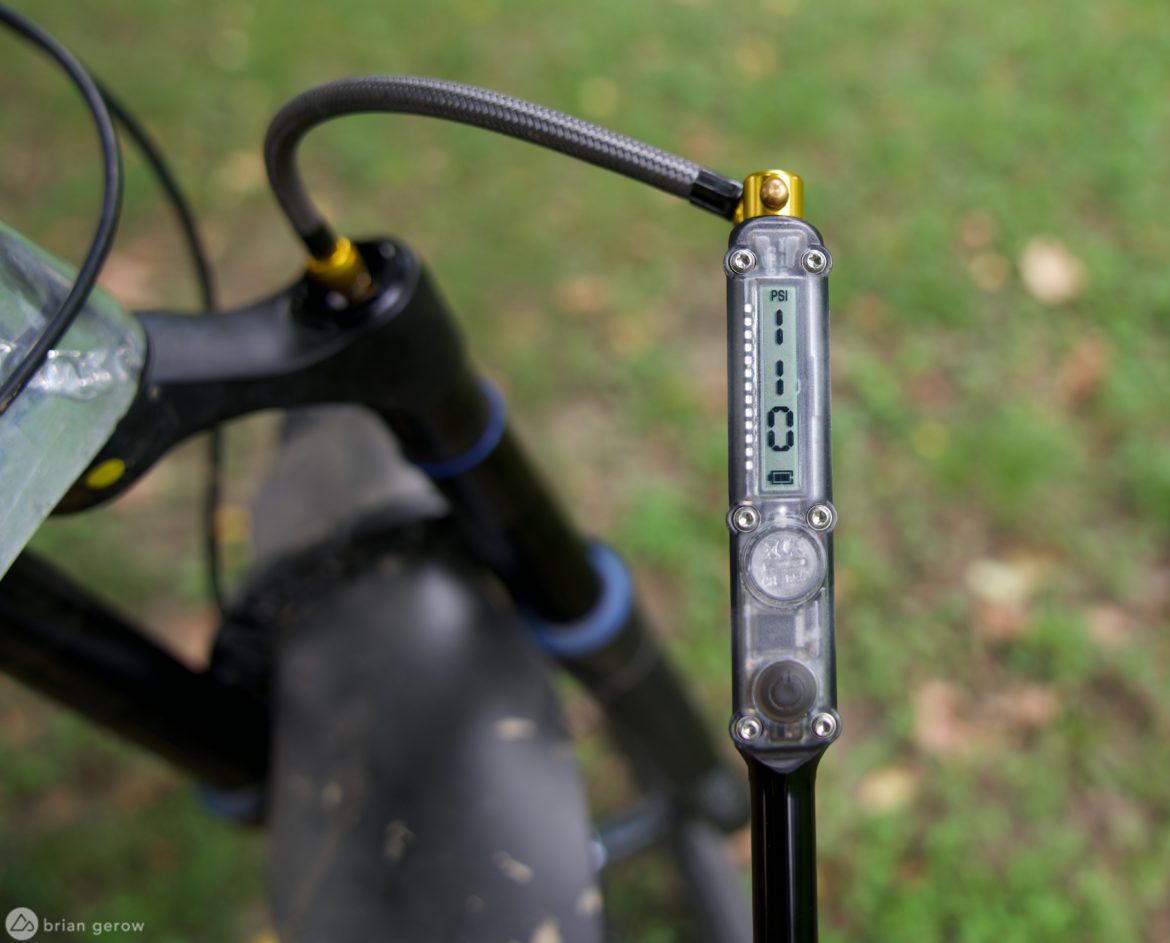 Up first, weighing in at a scant 109g, and emptying a reasonable $74.99 from your wallet, we have the Lezyne Digital Shock Drive. This pump’s slim and minimalist design make it the best option of the three for carrying along on rides. It requires about as much space as a small tire inflator and can even fit in a longer pocket if you are riding without a pack.

I expected this pump to be less accurate than others, simply given its minimal construction and focus on packability, but that expectation was patently incorrect. After pumping it to 110psi, removing the chuck, then reattaching the pump, it consistently read an average loss of 4psi. This accuracy allows me to confidently pump my fork to 74psi when I want the internal pressure set at 70psi, knowing that the pressure loss in the hose will always be 4psi. The Lezyne pump is a winner all around.

I have had this RockShox pump around for years, through countless shocks, and at least a couple of battery changes. Though it’s a bit bulky to ride with, It has been along for loads of test rides and suspension setup spins. The pump is simple, sturdy, and accurate. With only 5psi loss in the hose and body, its accuracy is unwavering and the math is simple. It has a permanent spot in my tool-roll for trips out of town. 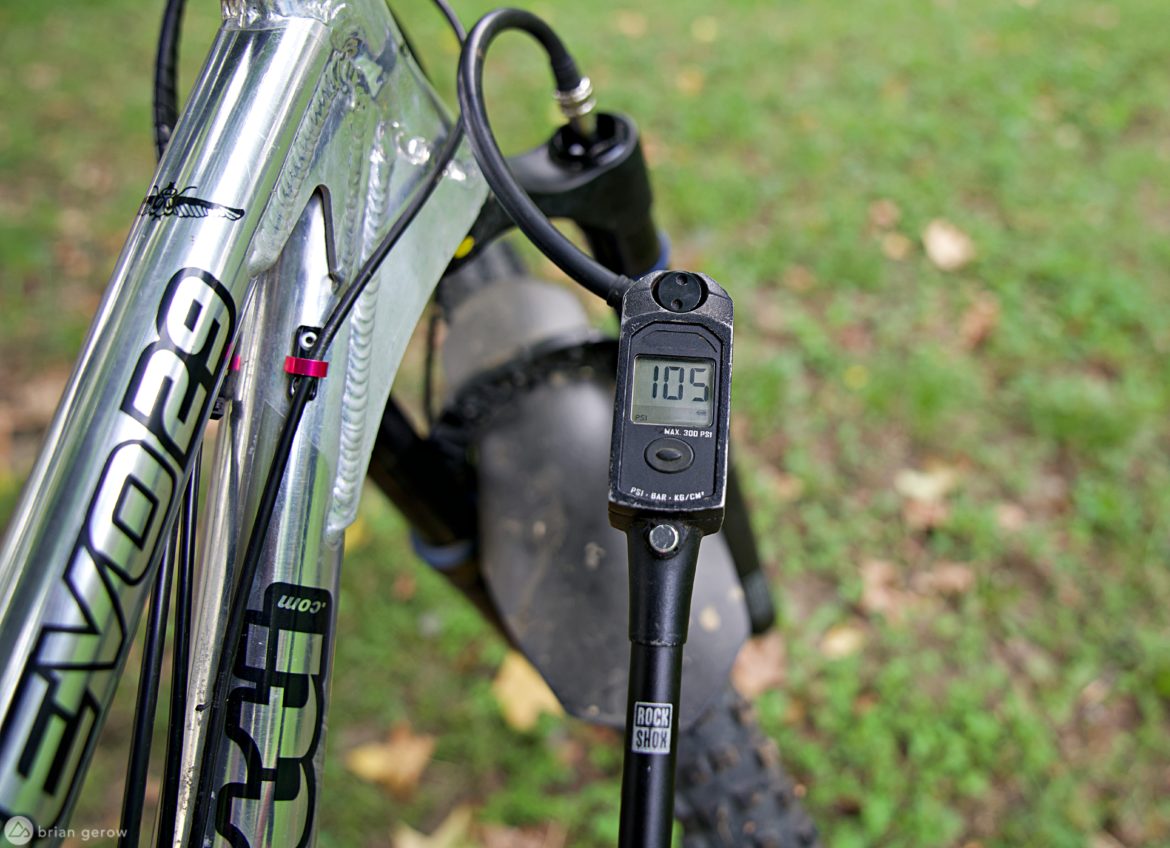 If you have searched the internet much for digital shock pumps you likely have seen this one a few times. It is rebranded by a lot of companies because they know it works well with their suspension.

The heaviest hitter in the test, in weight alone, is the SP1.0 Digital Shock Pump from Syncros. The SP1.0 uses a “Zero Leak” two-step air chuck that is intended to reduce the amount of air lost when removing the pump. First, screw the air chuck on to the shock, then turn the larger knurled portion of the chuck clockwise to open the shock’s air valve, reversing these steps to remove the chuck.

The idea behind the two-step system is that the hose will already be sealed before the valve on the shock is opened. In reality, air from the shock still has to fill the hose and pump body, just as it does with any other pump, and it takes a similar amount of air to fill the pump. 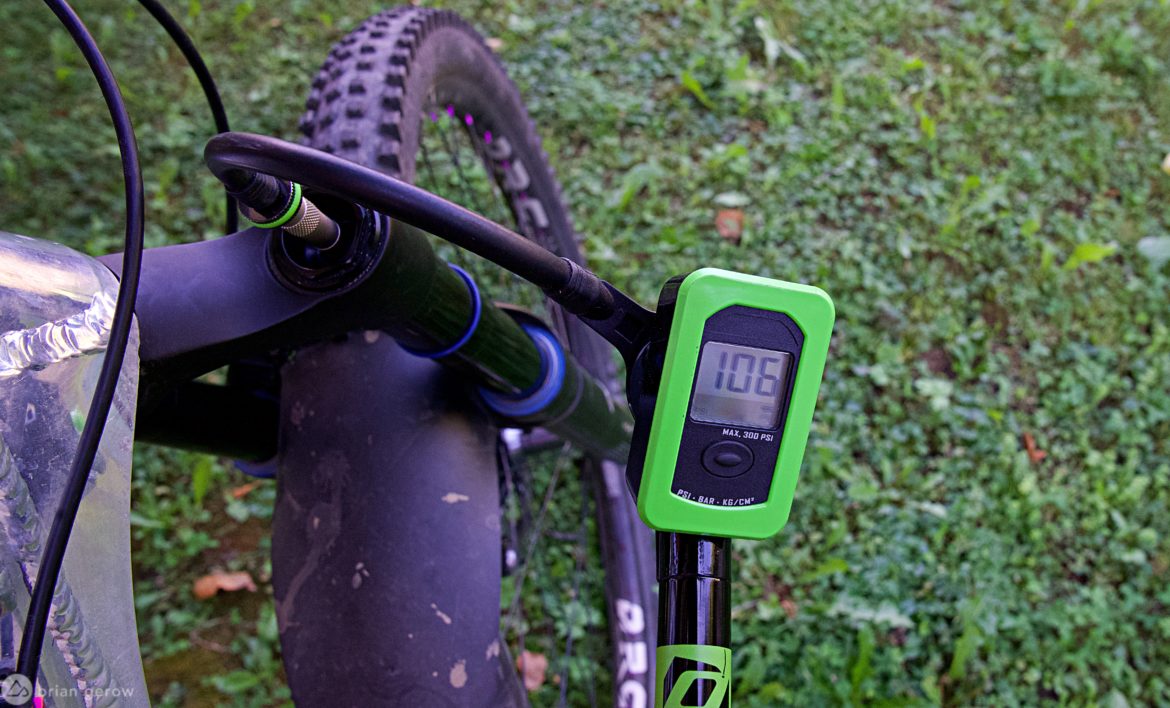 Though it seemed unnecessarily complicated at first, the SP1.0 is a cinch to use once you learn those few steps. The angled head makes the display easy to read when shock valves are located in precarious places, and the pump’s pressure release valve is far more precise than the other two models tested.

We would like to thank the above brands for sending pumps for review.