Bikepacking is a fast-growing mountain bike discipline that provides the perfect combination of the go-fast mountain biking ethos with the wilderness survival ethos of backpacking. Finally, the bikes are starting to catch up with the riders, with more and more purpose-built bikepacking rigs hitting the market. The Salsa Cutthroat is one such bike. 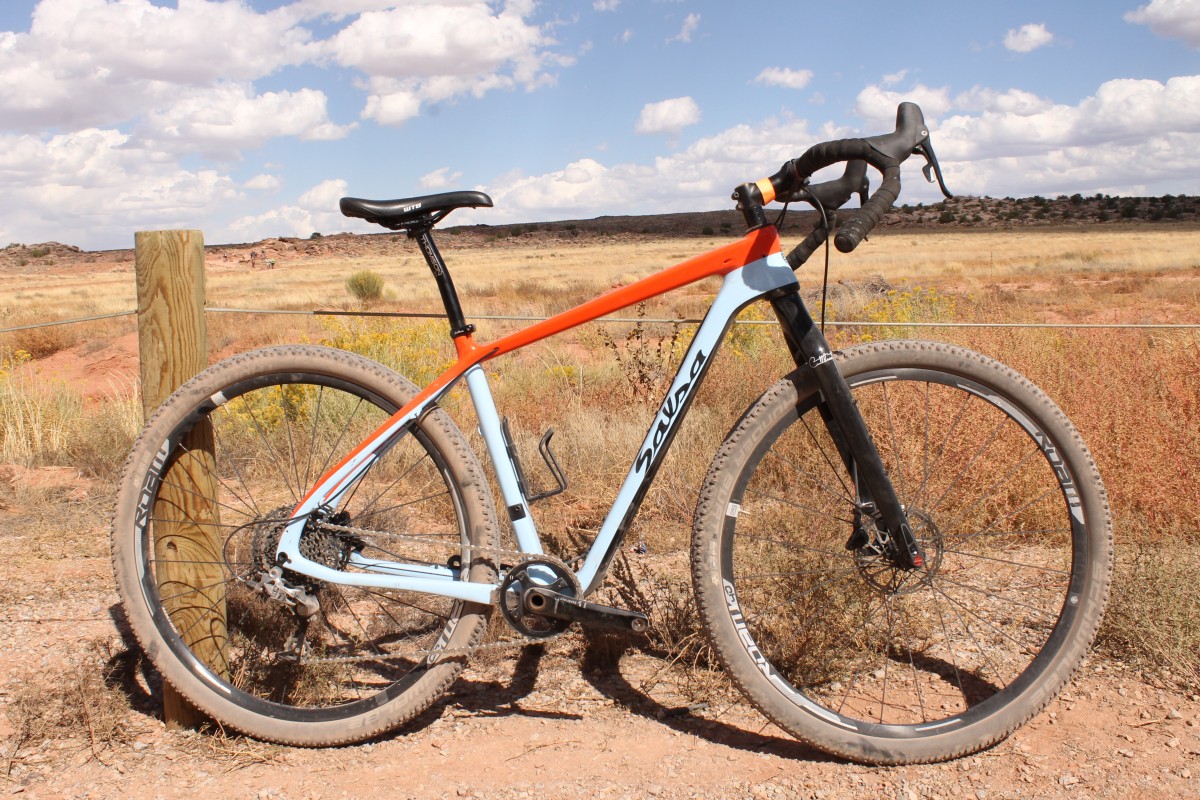 Cutthroat brings speed to the mixed surface, ultra-endurance bikepacking race scene. Every feature was evaluated and designed to obliterate long-distance cycling route and event records. An evolutionary leap forward from the Fargo, Cutthroat is all about speed and comfort; full carbon, Class 5™ Vibration Reduction System, and racing-inspired geometry make for a quick bike that won’t leave you pummeled as you ride alongside a rising moon.

All of the features built into this bike are designed with bikepacking in mind. While at its most obvious, the Cutthroat features a decal of the entire Tour Divide route on the downtube, these features go much further than skin deep. 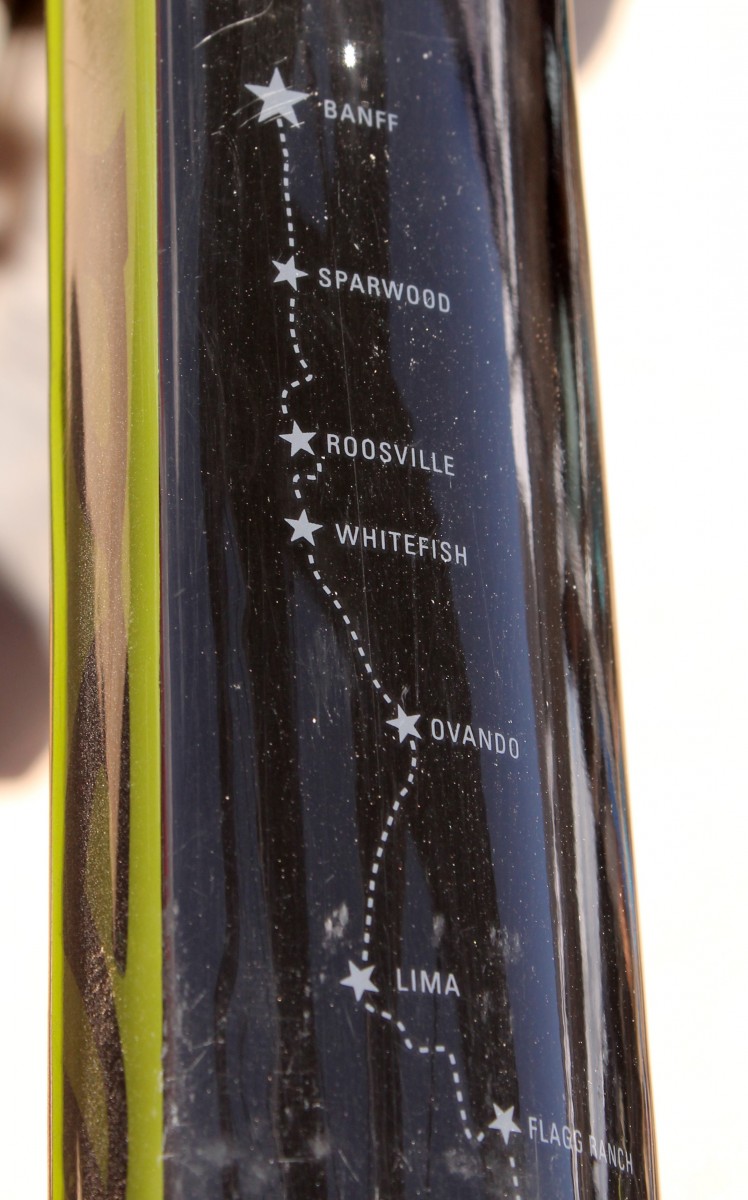 To begin, the carbon frame has an enlarged main triangle for maximum storage. While some bikes try to provide the best standover height at the sacrifice of everything else, the standover height on the Cutthroat is decidedly poor, in order to fit more space in the frame. And I dig it–I wish more trail bikes had room for large frame bags, even in full suspension frames.

But of course as a bikepacking bike, maximum storage is the priority. You can fit a massive frame bag in the main triangle, or alternatively you can fit three (yes, 3) water bottles inside the front triangle. There’s also a water bottle mount on the bottom side of the downtube if you’re really desperate, and with the bolt points on the fork you could mount literally anything to them–including more bottle cages. 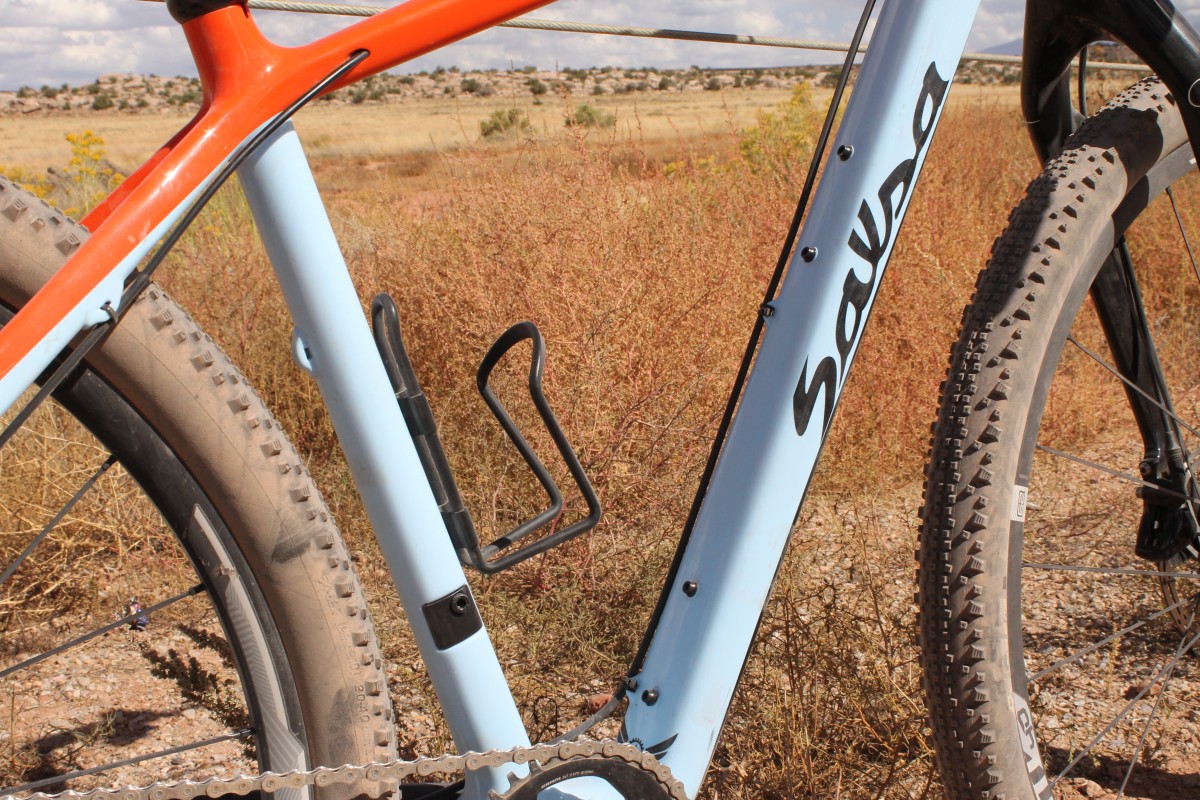 Still need more water carrying capacity? There are mounts for a bottle cage right behind the headtube on the top of the top tube, although Salsa claims that they have a proprietary gas tank bag on the way that will fit perfectly in that spot. This is fantastic news, as the bag I have mounted in that location on my own bike is the most-used storage compartment in my entire setup. 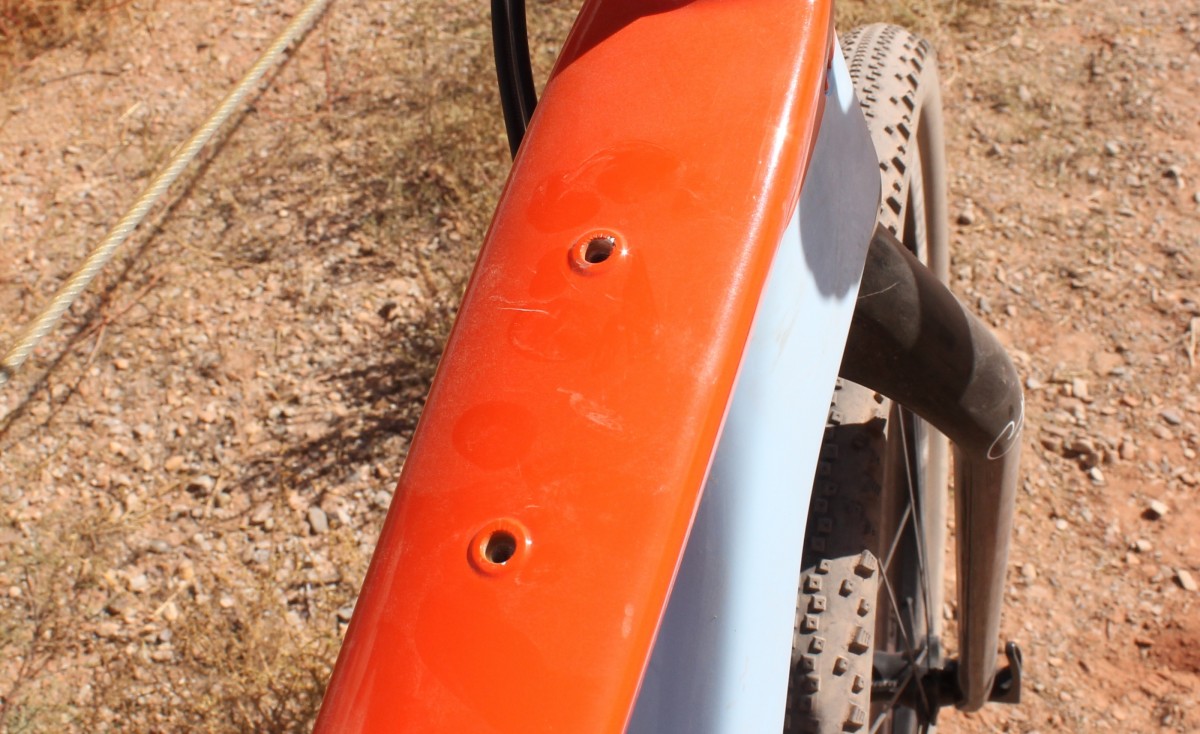 So we’ve established that this bike is setup for gear storage–great. But what about other features?

The Cutthroat Carbon Rival 1 of course comes stock with a rigid carbon frame, along with the Firestarter Carbon 15 x 100mm fork. However, in order to be as versatile as possible, the frame is suspension-corrected for a 100mm-travel fork, so you could easily add some spring to your ride if you so desired.

The “Rival” Part of the name refers to the SRAM Rival 1 drivetrain, a 1×11 drivetrain that is most often found on cyclocross bikes. Technically, though, the crankset is a mountain bike X1 setup, with a GX MTB 10-42t rear cassette. Also staying true to the Rival name are the Rival hydraulic disc brakes, with 160mm SRAM Centerline rotors. 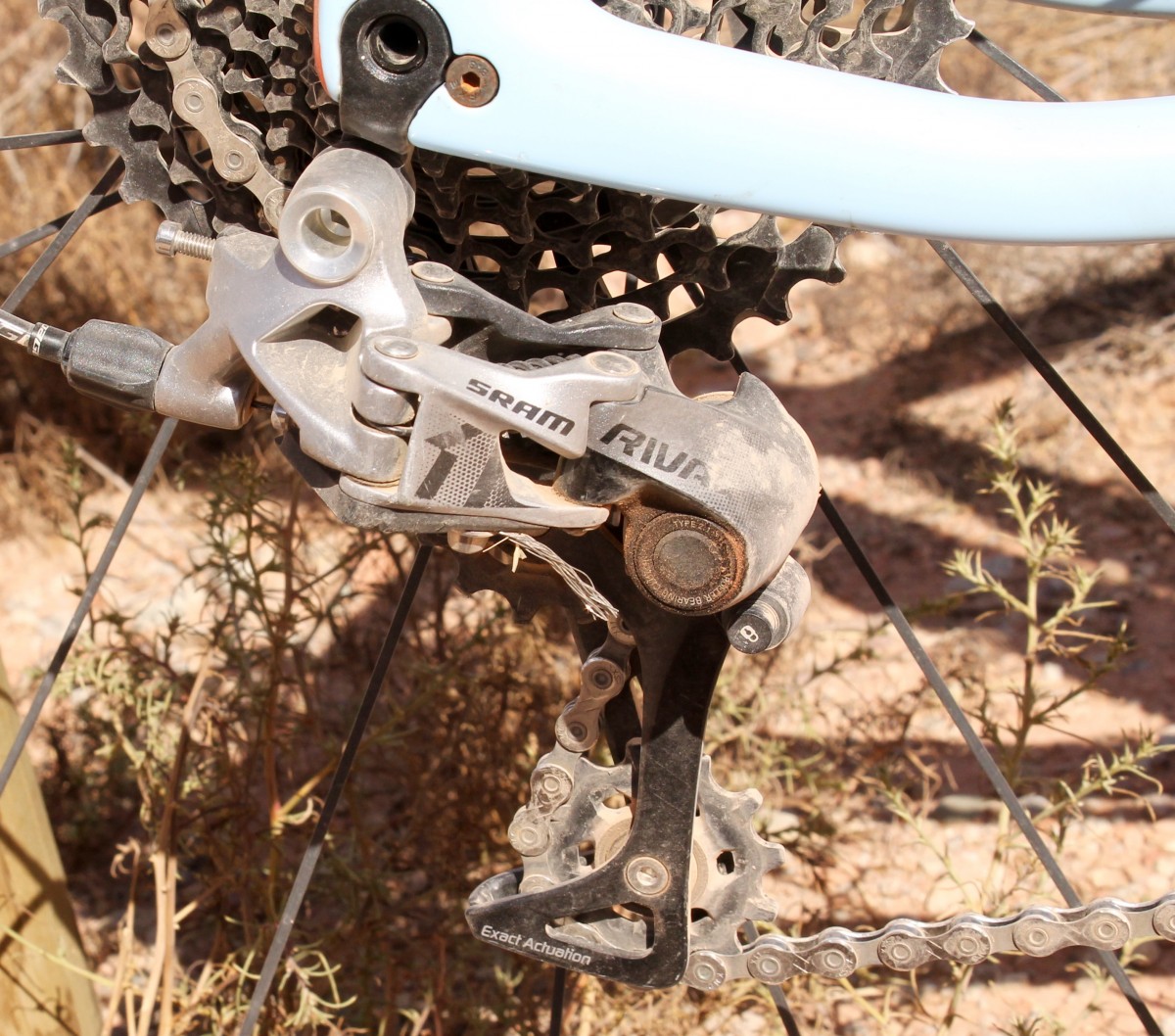 The Cutthroat is designed as a drop-bar machine. The shifters and brakes are both road-style, with doubletap shifting for the Rival derailleur and the latest-and-greatest cyclocross hydro disk brakes. The drop bar itself is a proprietary Salsa Woodchipper 2, which flares out at the bottom for increased stability. According to Salsa, whenever you’re riding offroad, you should be in the drops for maximum stability and optimum access to the controls–more on that later. 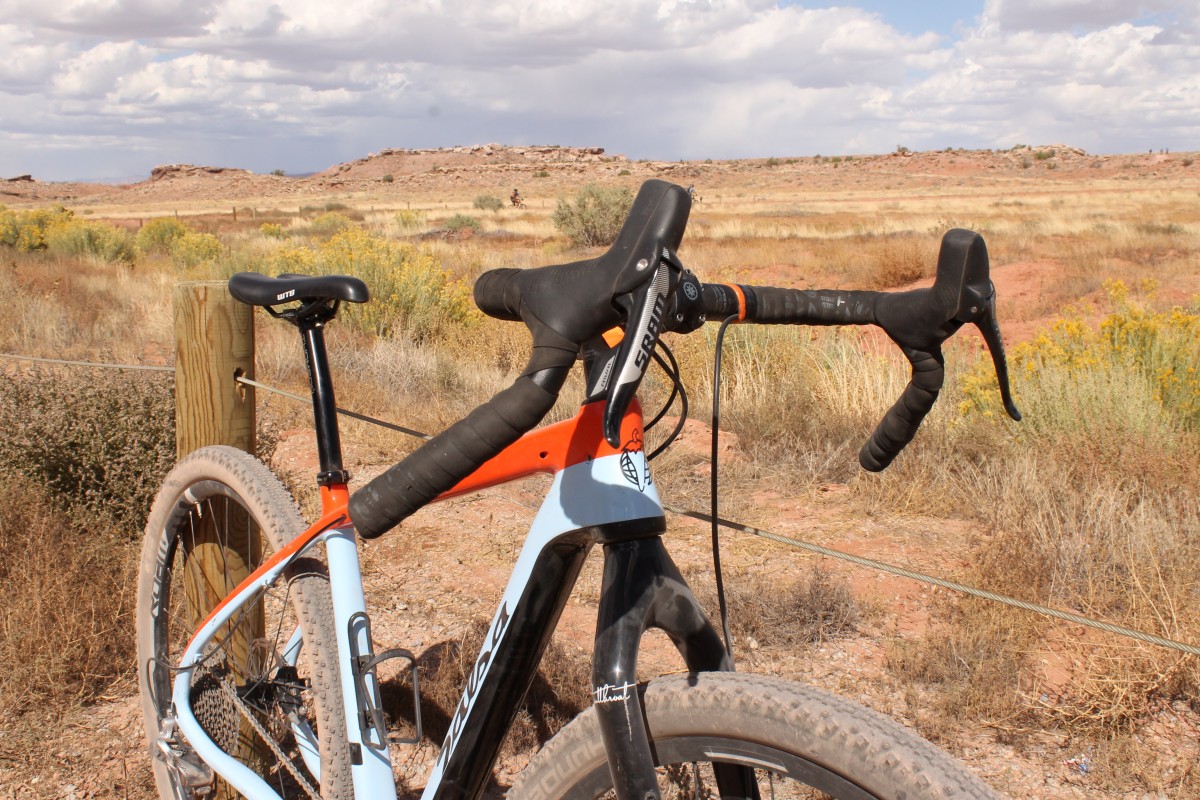 The wheels are SRAM Roam 40s, ready to go tubeless, and mounted with fast, narrow Schwalbe Thunder Burt 2.1 SnakeSkin Tubeless 29er tires. While 2.1s come stock on this bike, the rear seatstays and the stock fork can fit burly 2.4″ 29er tires if you so desire! Also, all this clearance means that there’s ample room to keep mud from packing up. 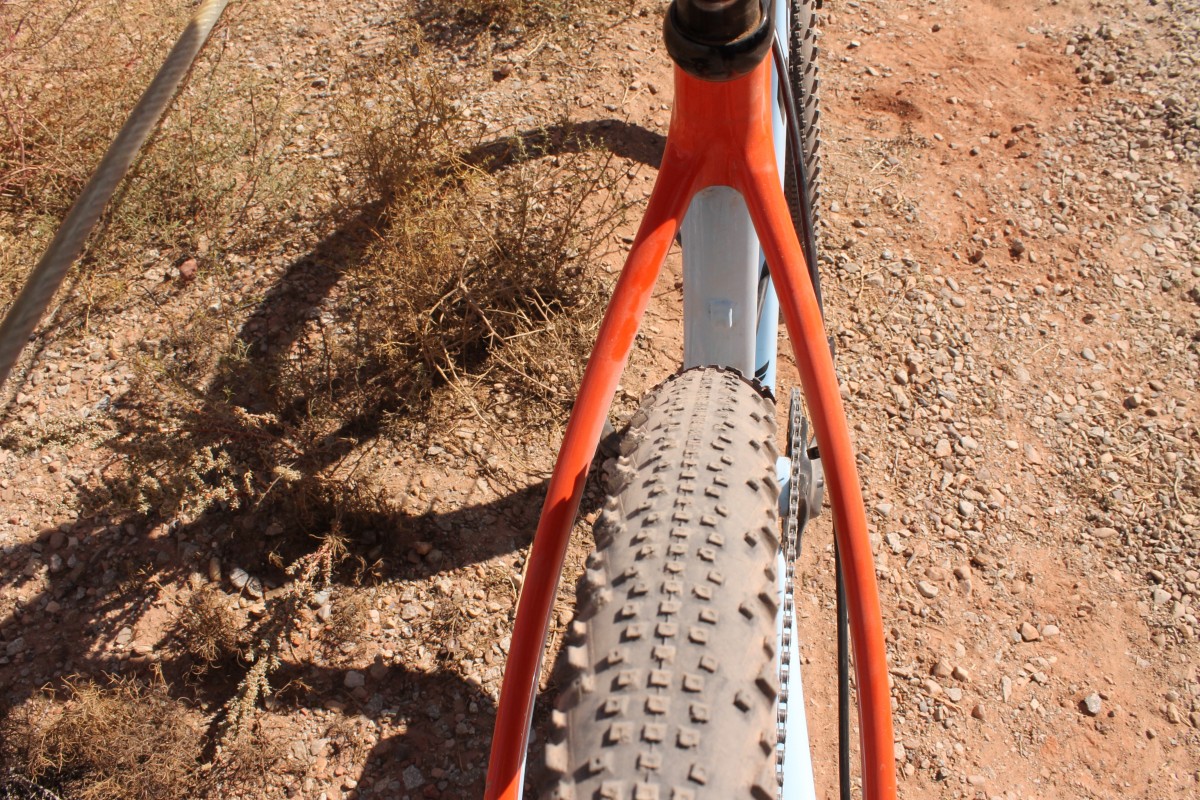 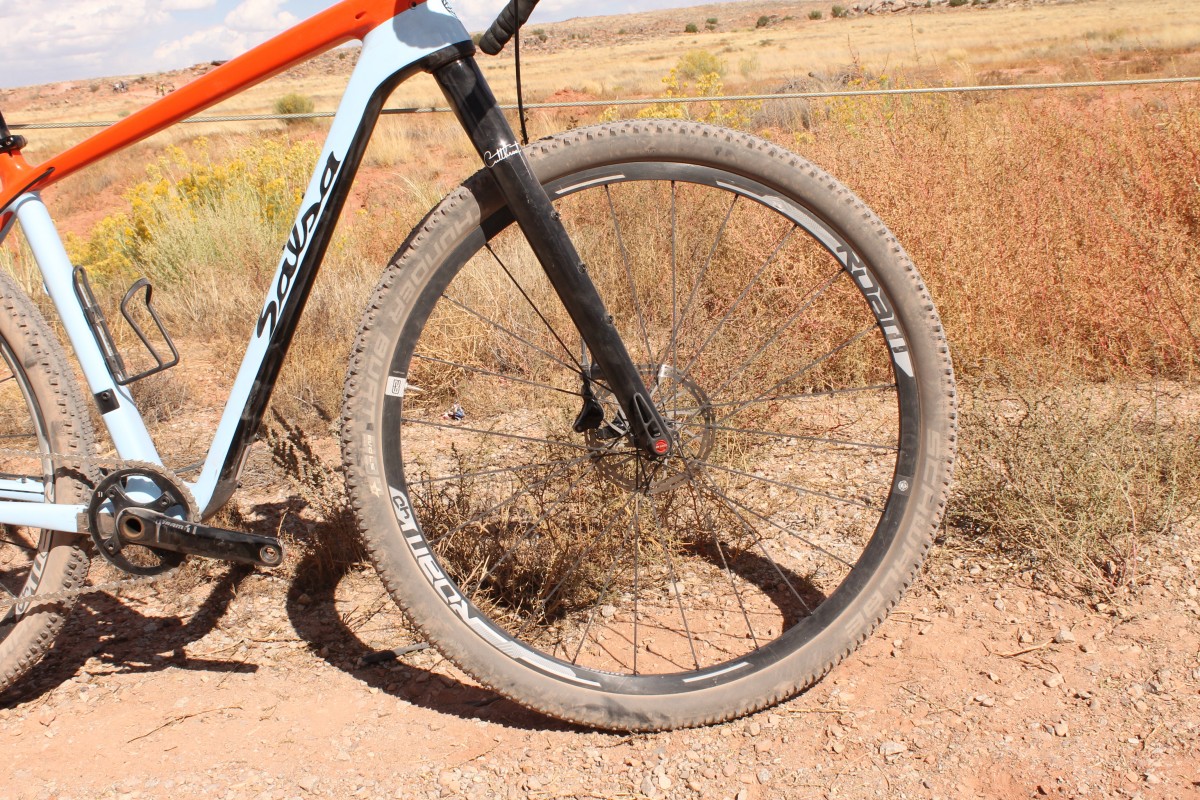 This specific rear triangle design is referred to as a VRS 5 rear end (VRS stands for “Vibration Reduction System”). For more information on this system, be sure to watch this video discussing the Class 5 VRS, which is also featured on the Warbird:

According to Salsa, the size medium complete bike weighs in at 18.5 pounds.

Unfortunately, I wasn’t able to review this bike as a fully-loaded bikepacking rig. But if you want to know how this performs for bikepacking, just ask Jay Petervary, who took second in the Tour Divide this year aboard the Cutthroat.

Personally, I decided to rip the Cutthroat around the basic test track at Outerbike that I’d been taking most bikes on: The Lazy/EZ loop. If you’ve ever ridden at the Moab Brand Trails, you know that Lazy/EZ is not really lazy and it isn’t so easy, either. Instead, this short loop includes slabby slickrock, chunky tech sections, punchy climbs, rhythm sections, bermed descents, jumps, and more. Taking a rigid, drop bar bike through these sorts of challenges sounded like a daunting task at first. 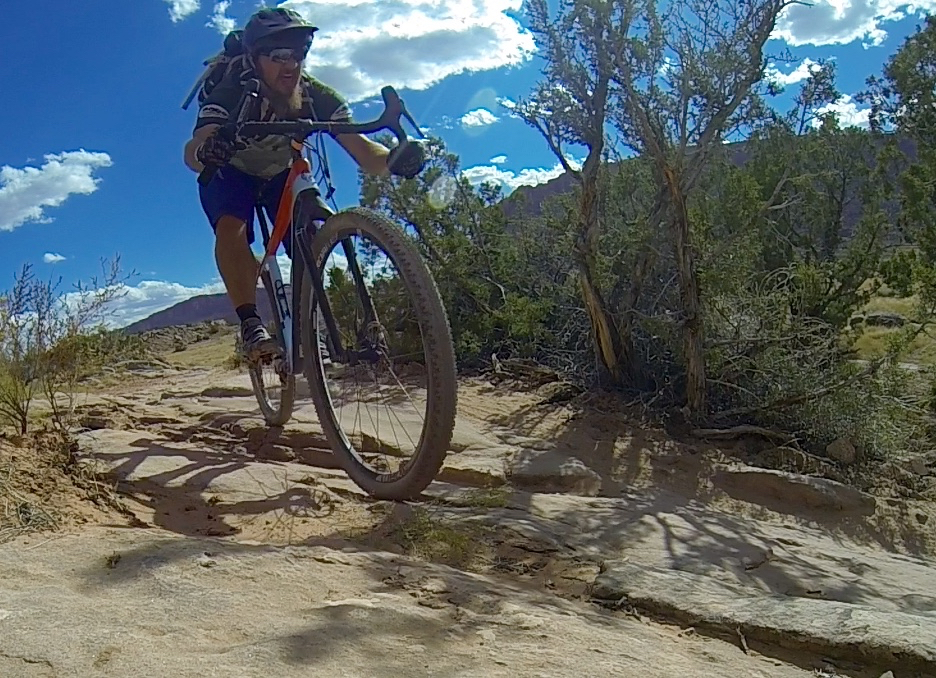 But as I began riding, I realized that I shouldn’t have felt as intimidated as I initially did. The Cutthroat was incredibly capable! However, I was very appreciative of the tip to stay in the drops when riding offroad. Staying down in the drops not only put my fingers in the perfect position to hit the brakes and work the doubletap shifter, but the swept out Woodchipper bar design was astonishingly stable. I tried to come up to the hoods and the bars a few times, but found both of those positions to only be useful when grinding up climbs at a slower speed, or on the dirt road. But even on most singletrack climbs, I found myself in the drops.

Why, you ask? Because I was hammering so dang fast!! That rigid carbon frame, efficient pedaling position, and uber-light 18.5-pound weight made the Cutthroat climb like a baboon fired out of a cannon! Seriously, I was looking at the trail in a totally different way, blasting through pedally sections at mach-10. 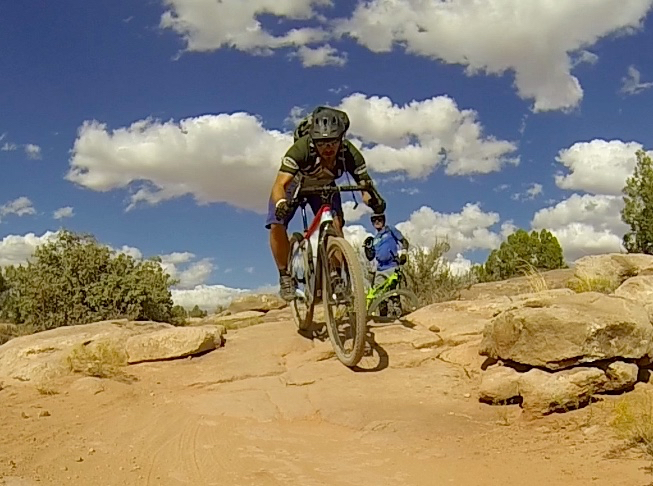 Of course, the technical sections weren’t the best. Descending chunky, rippled slickrock took some finesse, but it wasn’t as difficult or as perilous as I had anticipated. Honestly, the tires, while blazing-fast, where the least confidence-inspiring part of the technical handling. Bump up to a more aggressive tread and a fatter width, and you could easily and affordably improve the technical handling of this bike.

Watch below for a short clip of the Cutthroat in action:

While different tires might be nice, what I found myself wanting most weren’t new tires, and wasn’t a suspension fork or a flat bar. I found myself wanting a dropper post! On flowy descents, I was absolutely railing into the turns on the Cutthroat, and if I had been able to push the seat down and out of the way, I could have leaned that bike over even more. Of course, you can’t run a dropper post with a bikepacking seat bag, so that doesn’t make sense for this bike’s intended use. But still… if you were to use this for daily singletrack ripping, I could easily see a dropper being a useful after-market upgrade.

As I mentioned above, this bike is fast. I didn’t get passed by a single person when I was aboard the Cutthroat–even descending–but I did rocket by about a dozen people that felt like they were standing still. The Cutthroat operates on a different playing field entirely!

However, by the end of my chunky 3-plus-mile test loop, I was ready to get off the singletrack and back on some smoother roads. While the Cutthroat is capable in the chunk, with the stock setup there’s no denying that it’ll beat you up in the rocks. But of course, as mentioned above, there are plenty of ways to alleviate that issue. 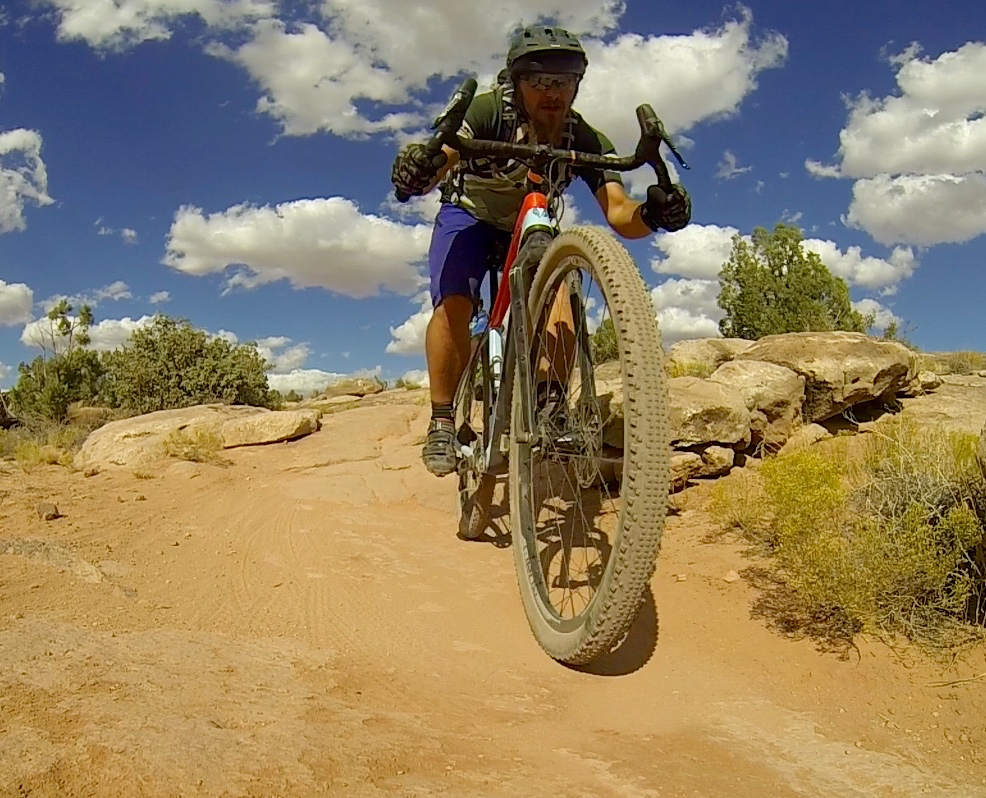 While designed as a bikepacking bike, I want one of these in my stable–even if I never go bikepacking. Seriously, you could do just about anything with the Cutthroat.

Road riding? A different set of wheels, and you’d be ripping.

Cross country singletrack riding? A wider set of tires, a suspension fork, and a dropper post, and this would be just as capable–and way faster–than the hardtail 29er currently in my garage.

To make a long story short, I don’t think I’m ever going to pay money for a dedicated road bike, a gravel cyclocross bike, or a hardtail 29er mountain bike ever again. Instead, I’m just going to get a Cutthroat.

Gear
The Maxxis Minion DHF Tire is Still the One to...
Gear
These MTB Deals are Fire, including 40% off Patagonia Dirt...
Gear
Never Underestimate the Power of a Good Zip-tie
Progression
Sizing Up or Down Plus Handlebar Widths and Crankarm Lengths:...
Subscribe
Login
Please login to comment
3 Comments
Most Voted
Newest Oldest
Inline Feedbacks
View all comments

Would be nice to read a review of newer cutthroat models.

Great review! I’ve been lusting after one of these myself…