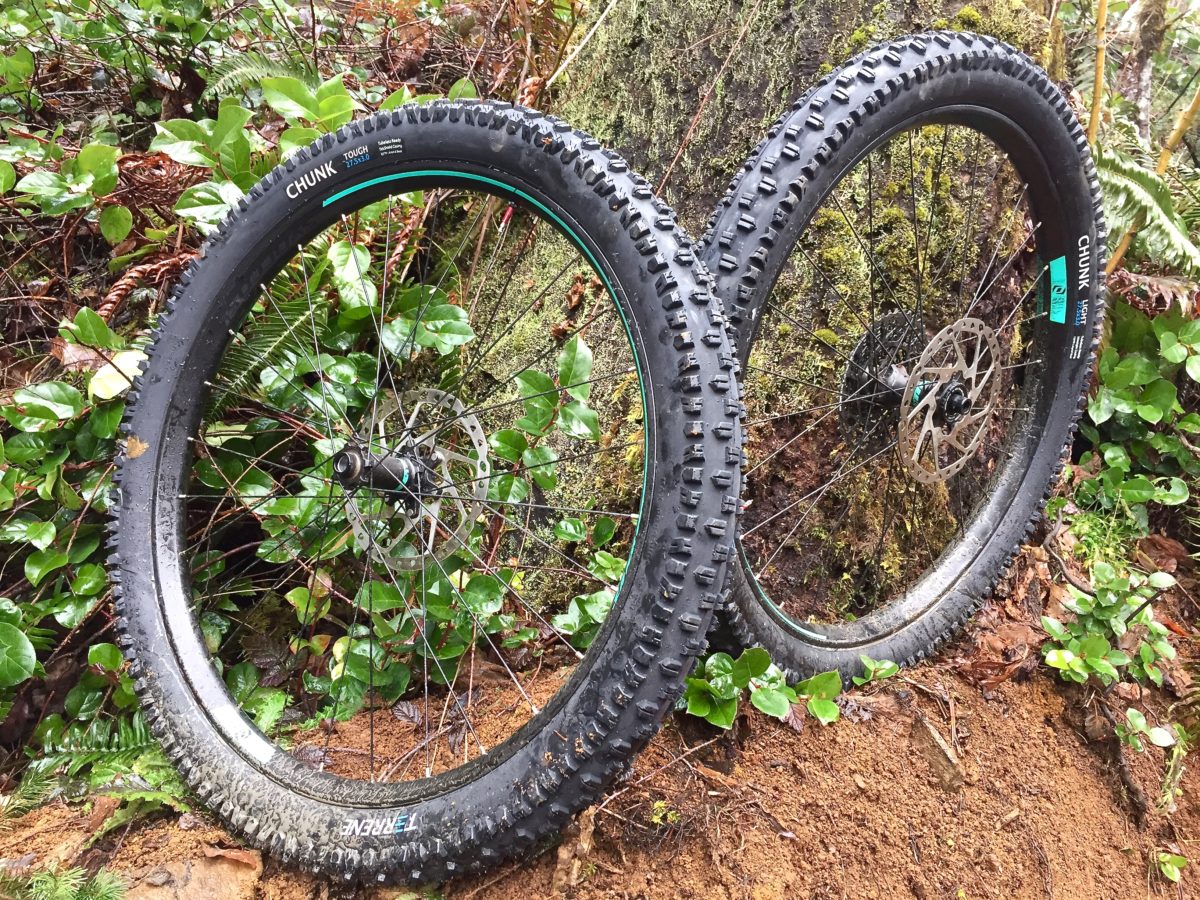 Given their high turnover rate, ability to boost your bike’s performance at a relatively low cost, and ever-widening wheels, if there’s one thing I won’t hate on, it’s more tire options! And the list doesn’t just end there, as varying tread patterns, casings, compounds, and other tire characteristics would continue to keep us interested, if only the bike tire industry wasn’t so cost-prohibitive. Despite a host of other barriers that keep startups like Terrene Tires out, industry veterans Joe Yang and Tim Krueger have managed to break through with some exciting options for you rubber fiends.

Terrene currently offers three tire models, each with 2-3 size/width options–the Wazia, a fat bike tire with a studded version ($120 USD); the Elwood, a dirt road tire ($65 USD); and, the subject for review here, the Chunk trail tire ($80 USD). It is expected a fourth model for mixed-surface touring, the Honalee, will be released soon. 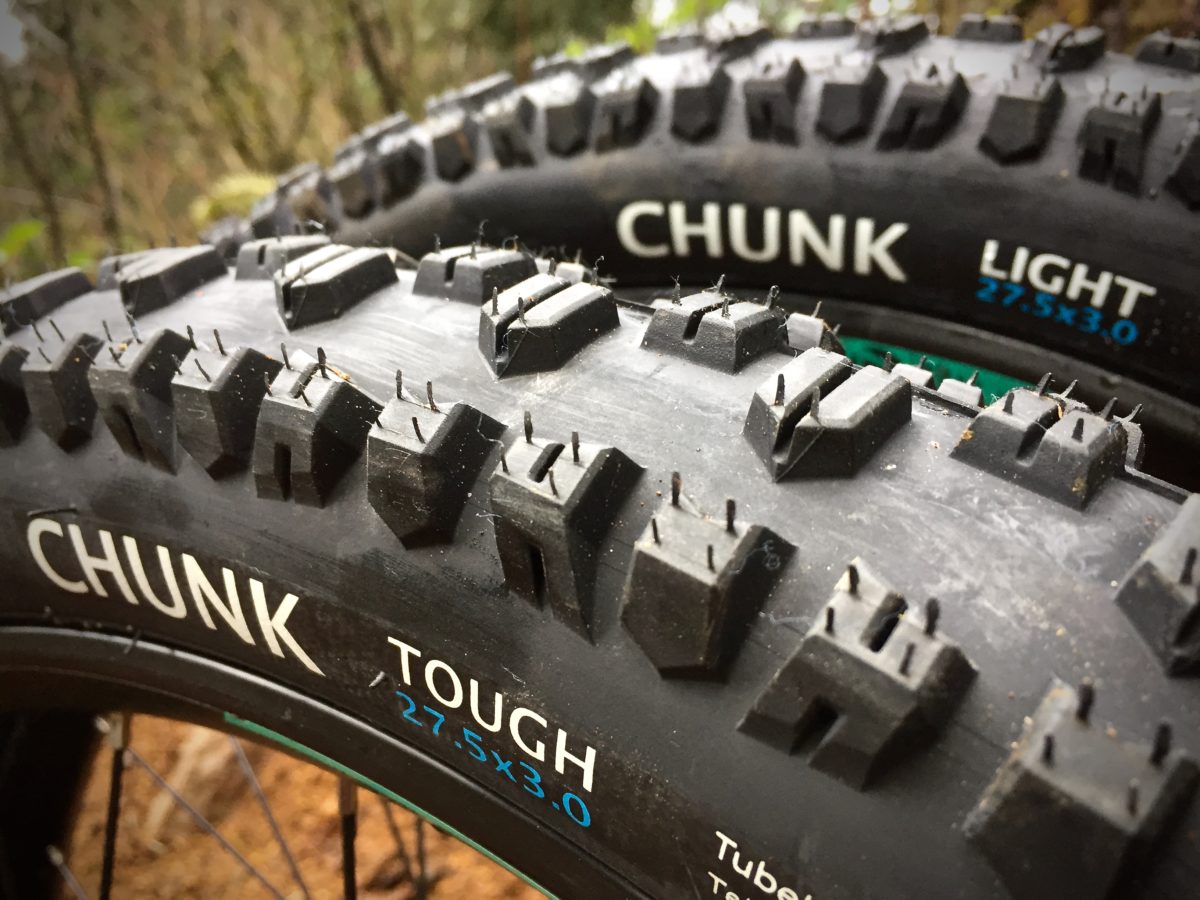 Terrene Chunks are aggressively-lugged trail tires offered in both standard and plus-size widths, in both light and heavy casings. The Chunk Light (940g) has a 120 TPI casing called Ultralight, while the Chunk Tough (1,060g) is the heavier version with a 60 TPI casing called TekShield.

Outside of thread count, both versions of the Chunk have exactly the same Kevlar bead, a 62a durometer center rubber with a softer 51a compound for the outer knobs, burly tread pattern, and an $80 USD price tag. While Terrene also makes the Chunk in 2.3″ for both 29 and 27.5″ wheels, I took a pair of 27.5+, 3.0″ Chunks–one Light and one Tough–spec’d for wheels measuring 35-50mm, internally.

Bottom Line: The Terrene Chunk tread is ambitious, its compound grippy, and its overall design is well-executed, resulting in a predictable feel through corners, solid climbing platform, and powerful bite while braking. Depending on terrain and riding style, you may get more use than I did out of the Chunk Light, while the Chunk Tough was a perfect match for the wet and rowdy Northwest winter.

All Terrene tires are tubeless ready with a folding, Kevlar bead, and I was able to uneventfully mount up the Chunks tubeless with a little help from an air compressor, to a pair of Syncros 3.0 Plus wheels measuring 35mm, internally. In order to stretch the limits of the lighter of the two casings, I mounted the Chunk Light to the rear and the Tough on the front. After leaving them sit overnight at Terrene’s recommended max pressure of 35psi, the following morning I noticed a reduction of 15 psi in the Chunk Tough. An initial loss of pressure in newly-mounted plus tires is hardly uncommon and, after one top-off of air and a ride, the Chunks would consistently hold air over the two-month duration of my review. Devoid of any ramped knobs or other directional indicators, it appears you can mount the Chunks in any orientation.

The term “confidence-inspiring” is usually one reserved until actually riding a product, but one look at the Chunk plus tires mounted up was enough to insert such a superlative so early. At 15psi on 35mm rims, the Chunks are uniformly round and quite portly, measuring exactly 3″ (77mm) between the widest part of the side knobs. The overall tread pattern is blocky, fairly tall, and spaced evenly, with aggressively-shaped cornering lugs. A pattern of true center knobs doesn’t exist on the Chunk, but evenly-spaced square knobs located medially alternate with equally-buff transition knobs. The shoulder knobs alternate between two highly-irregular shapes, and each one matches either a transition or centered knob. Siping is found on every center and transition knob, and every other shoulder knob. Overall, the Chunks appear to live up to their name.

No more than 200 yards on my first ride aboard the Chunks down an Enduro™ trail, I heard a sharp pop followed by a persistent hiss. Upon inspection, I found the rear tire–the Chunk Light–to be the culprit, but nothing a little Stan’s couldn’t seal. In all fairness, the Cold Creek trail in SW Washington is no place for anything short of DH casing, and I would’ve been floored had the lighter tire held on that trail. So yes, I set the Chunk Light up to fail, which it did, as so many other lighter tires have on this particular trail. In hopes it would redeem itself, I left the Chunk Light on the rear, where it would hold but a few more rides until that same Stan’s-plugged-pinhole festered beyond usability. The good folks at Terrene sent us three tires, two Light and one Tough, so I reloaded properly with the Tough on the rear and a fresh Light up front, yielding much better results. 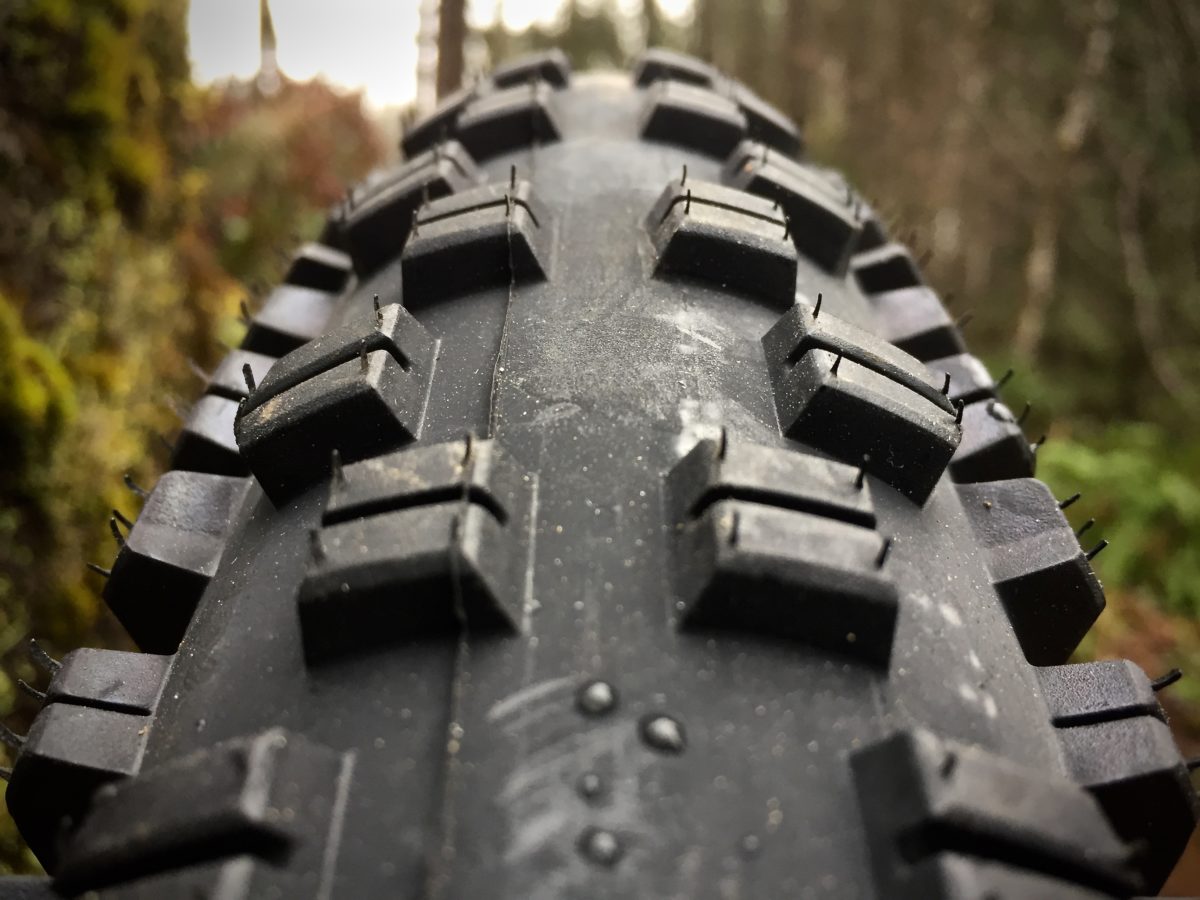 Naturally, the larger volume tire was more difficult to lean over than a standard tire, but the Terrene Chunk provides a seamless and predictable transition from side to side. The Chunk’s block pattern is evenly spaced outside of one longitudinal channel running the center. So, while a dead zone theoretically exists only when you’re exactly upright (how often should that happen?), little effort is required to find those beefy shoulder blocks in the corners. This knob spacing, together with a round profile, also offers more of a drifty feel where break in traction is slow and predictable, rather than an aggressively-built square tire where cornering feels either “on or off” (think Maxxis High Roller II and Minion DHF).

In a word: planted. But, in the name of sound technical writing, I will expound. Where the Chunks lacks in contoured knobs for lowered resistance, they gain in creeping and crawling over more demanding trail features that, during my time, were also wet and muddy. The harder center rubber, coupled with square, siped knobs, connected firmly with rock faces, root patches, and small tree fall. Larger tires naturally deflect less, adding to the Chunk’s plow-ability score and wont for descending without regard.

With a strong trailing edge, the beefy knobs bit hard when on the brakes and, with psi around 15, I could just feel the Chunk sink its teeth into the trail. This braking prowess also meant a bit more effort to get back up to speed and, unlike their drifty cornering characteristics, braking with the Chunk has more of that on/off feel. Depending on your terrain, braking characteristics will change in wet conditions as mud packs the tire and, while there certainly are tires with wider-spaced knobs or mud-specific applications, the Chunk held its own here where 10-12 inches of rain during January and February is average.

Never mind the sheer weight of any 3″ tire, ambitious knobs and unramped blocks make for a good bite through corners, on rock and root, in the mud, and during braking, but all at the cost of higher rolling resistance–a factor partly quelled by the Chunk’s evenly-spread tread. As a result, the Chunks are a bit draggy and obviously overkill for hardpack or buffed-out trails, racing, and bikepacking where gravel road mileage outnumbers singletrack; but that’s not the purpose for which this monster was created. Compromises. Despite resistance, even in some of the above applications, I would at least consider the Chunk up front especially if you’re tearing off on unfamiliar trail or into the backcountry. 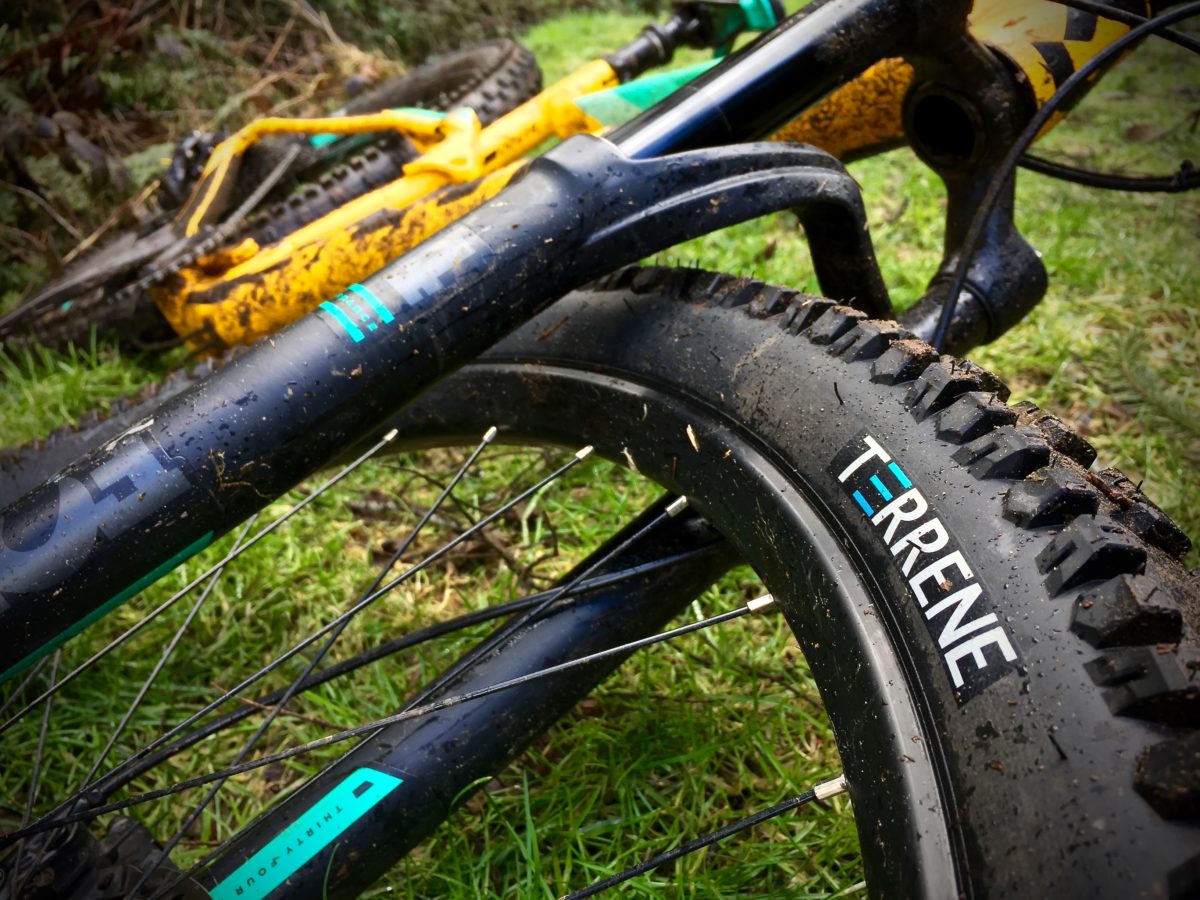 I ride in the Pacific Northwest where wet trails littered with organic debris and the occasional snowfall rule eight months of the year, so running the Terrene Chunk both front and rear makes every bit of sense during winter. As a consequence of so much rain, the other four months make for mostly pristine trail conditions, but due to the relatively rugged, steep nature of some of our trails, the Chunk will hold its place as my front tire for the summer, with something a bit smoother for the rear. Again, your terrain and riding style will dictate which of the two casings is appropriate. As for me and my house, the heavier Tough proved more robust and reliable.

The Terrene Chunk rides aggressively without requiring aggressive skills. At the appropriate psi (12-15), the larger contact patch and reduced deflection produces a larger margin of error for novice riders. On the other hand, experienced riders may just ride faster, rowdier, or both! As an experienced rider myself, I benefited from all of the above, but what I most enjoyed about the Chunk is its stability and predictability: seamless cornering, planted climbing, and biting brake power.

Thanks to Terrene for providing the Chunk tire for review!

Thanks for the review.
How do they compare to nobby nics?

I think they are fairly similar to the NNs in terms of tread pattern. I do believe the Chunk is going to have better siping that may enhance grip especially in wet. I also think the Chunks are of a softer compound whereas the NNs feel harder. Schwalbe doesn’t give durometer ratings so it’s hard to quantify exactly. I also feel the Terrene’s have a better sidewall support than NNs. All of these benefits over the NNs probably mean more weight. As you read, I didn’t get along very well with the Light version so I’m making these comparisons with the Chunk Tough. If I had to buy plus tires right now, I’d go with Terrene Chunk Tough. Since writing this article, I still have the Chunk Tough on the front of my plus HT and I’m loving it!