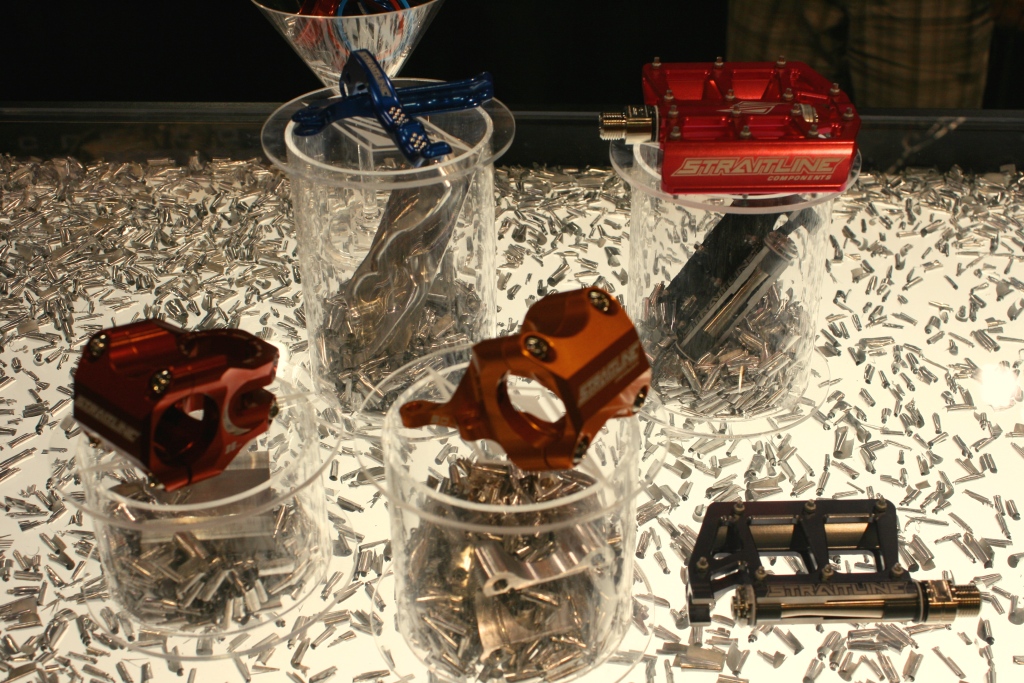 At Interbike I got a chance to chat with Greg Parish about how Straitline Components got started. Unlike many bike companies, Straitline’s story includes a scrappy and unusual start. But being ultra passionate about Mountain biking you can see the commitment that the folks at Straitline have made to make what Straitline is today.

Mike Paulson and his two sons Dennis and DJ took Mike’s $50,000 retirement bonus and bought some modest lathes and mills for a garage work shop 12 years ago. They were doing odd jobs for anyone who needed help and grew a small client base off of quality work and service until one day Dennis had a brilliant idea while picking his brother up from work.

DJ worked at a local diamond cutting firm hidden away in an unassuming warehouse on the Sidney Airport property and spent his day cutting raw diamonds. DJ and Dennis both had machining degrees and engineering know-how so they decided to design a lighter, more accurate diamond cutting table that basically ended up setting the standard for the industry. Sales were brisk as thousands of units sold worldwide but soon the orders basically stopped. It turns out the tables never screwed up or needed replacement and they basically put themselves out of business by designing such a reliable product! The brothers learned a lesson about diversification which led to the creation of several new divisions, including the bike division.

Fortunately the diamond table got their company’s name out into the market place and word of mouth contracts started to pour in from the scientific and medical communities. They took every cent made from Straightline Precision Industries and invested in better, newer CNC machines and lathes eventually bought a two bay warehouse in Sidney.

At Interbike Straitline displayed a blinking GPS relocation tube used on NASAs rocket boosters that helps the navy relocate the boosters when they fall into the ocean. “(The firm we did machine work for) has been acquired and sold 8 times internationally and never once have they questioned our price or attempted to find new closer suppliers because we never make mistakes and mistakes cost millions on their end,” Greg told me. Straitline even did some work on the mars Lander project too, played with some high-tech alloys, and machined ultra-precise shutter systems for certain cameras. “We do a lot of secret hush hush stuff for most intelligence agencies, mainly counter intelligence GPS boxes so agents can be safely recorded and or bad people get tracked,” said Greg.

Straitline also dabbled in mini moto and marine products before deciding to make bike parts after modifying a motorbike lever for mountain bikes.

So after doing more and more fancy contracts, Straitline took all the money and never stopped re-investing in technology. No fancy cars or toys, just re-investment in the company to stay ahead. Now Straitline has moved in to the ultra-modern world of CNC machining and have fully automated machines with roughly 19 hours per day of unmanned machining. Straitline is now using cream of the crop Mori Seiki automated CNC machines worth more than $1.7 million for the bike division alone!

Look for a few reviews in the coming months from Straitline.