The first annual South East Bike Expo was last weekend at the Georgia International Horse Park in Conyers, GA. Dozens of companies where on hand with gear to demo on the trails there, and my first demo was a bike from the Shimano booth.

I grabbed a Lynskey Pro29 VFoutfitted with a full Shimano XT group. Shifters, derailleurs, chain, cassette, cranks, brakes, and even wheels. A lot of people don’t know this, but Shimano also makes non-drivetrain components under the brand name PRO, and my Lynskey was outfitted with a PRO riser bar, stem, and carbon fiber seat post. I was mainly looking forward to trying the new Shimano XT brakes on the bike, which use Shimano’s ‘Ice Technology’ (aluminum core rotor and cooling fins buit into the brake pads), but I was also really excited about throwing a leg over a titanium mountain bike for the first time. Lysnkey only builds in titanium, and all of their bikes are built by hand in their factory in Tennesee. This particular model uses their helix shaped tubes, which are a love-it or hate-it style. Personally, I prefer the look of their round tube frames, but Shimano didn’t have any in my size on hand, so I took the one with the twisted tubes instead. 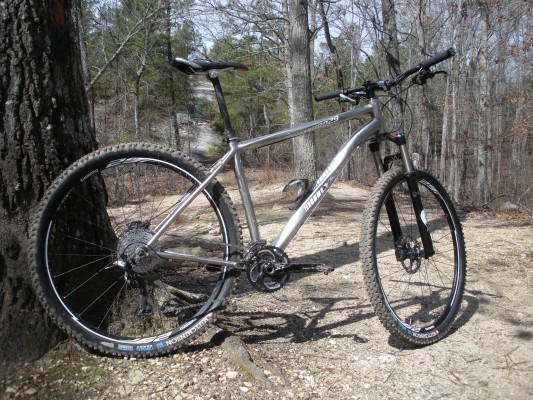 I love the look of titanium. I like round tubes better than the twisted helix however.

Full disclosure: I didn’t spend a ton of time on this bike. I took the Lynskey to the granite loop at the Georgia International Horse Park during the Southeast Bike Expo where there are tons of exposed granite slabs – Atlanta’s own mini-Moab. The ride was only about 3.5 miles long, but the often steep terrain was a pretty good place to put a bike through its paces. 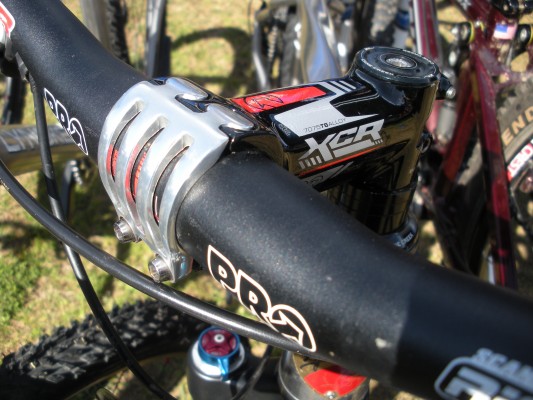 The PRO stem has some unique design features, using interlocking wedges on top of the clamp instead of traditional bolts.

It’s hard to say too much about a frame from such a short ride on unfamiliar trails. And, I think I might have had a size just a bit too large. Of course I also didn’t play around with the cockpit set-up other than saddle height. With more time I would have dialed in the seat position more precisely, and slammed that handlebar as low as it would go. As it was set up however, the bars were a little high for my taste, and the steering a little too slow. Once I got home and looked at the geometry chart I confirmed my suspicions: the headtube was 1.25″ taller than both of my personal bikes, and the riser bar and spacers beneath the stem added even more height. It took a good bit of concentration to keep the front end pointed where I wanted when clawing up some of the steep granite pitches. But, going down, it was nothing but inspiring. Super stable, never nervous, and titanium’s fabled ride quality could certainly be felt. 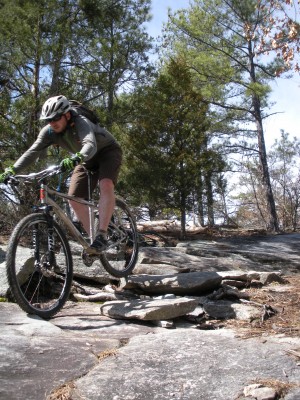 The bike was pure confidence on the down. And that is a lot steeper than the photo makes it look.

The new XT rocks. Simply put, it just works. Many times I found myself in too high a gear while cranking hard up a steep granite climb, and even then, it banged out shifts accurately and quickly with no fuss. The Lynskey I tested had a 3×10 drivetrain, which shifted fine, but the next bike I demoed (more details in a later blog post) had a 2×10 set up and it shifted even better up front.

The shifting feel is a lot different than the SRAM triggers I used on a recent review bike. Shifting to a bigger cog in the rear took a little care at first. It takes a good bit of pressure to get the shift paddle moving, but once it starts moving it loses all resistance. So, at first instead of just shifting one gear I’d shift several. Another quirk was the placement of the rear down-shift paddle which seemed to be too close topush with my thumb, though I found I could also pull it with my index finger. But, I’m an index finger braker, so I need to shift with my thumb. This could probably bealleviatedby taking time to set up all the controls exactly the way I want, to fit my hands. I didn’t have a chance to do that with the demo–I just grabbed it, set the saddle height, and took off. Hopefully I’ll get a chance to try the group again for a longer term review (hint hint Shimano!). 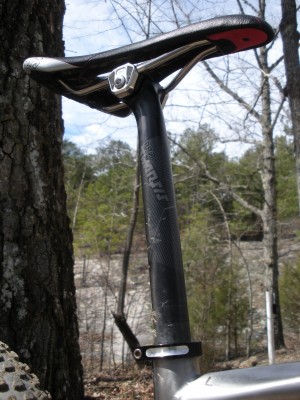 The PRO carbon post is a nice looking piece of hardware.

This is what really impressed me–the new XT brakes. Loved everything about them. The lever shape is perfect, plenty of power, good modulation, and NO NOISE! My Avid brakes are often loud and neither of the Shimano brakes I used at the expo ever made a single noise. The power comes on slower than the Avids; there’s not that initial ‘hit’ if you will, but it’s extremely linear and predictable and I never felt the need for more power. I can’t speak to their capabilities on long extended descents, but I’d love to find out. 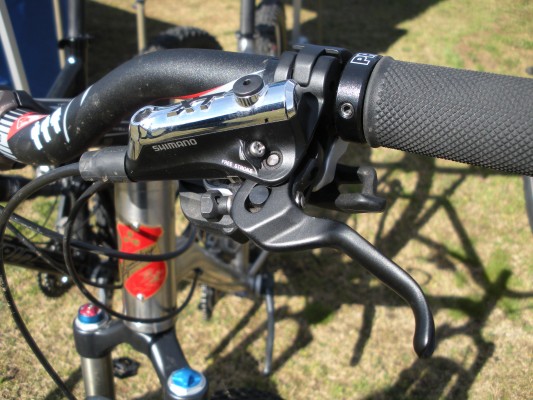 I really like the brakes, but needed to spend some time adjusting the shift paddle positions.

After returning the Lynskey I grabbed another demo bike and hit the ‘woods’ side of the trails. Look for another blog post on that bike coming soon. Here’s a hint: it wasn’t made of metal, and starts with an ‘F’ and ryhms with ‘dealt’.

Good review, it’s been a while since I’ve ridden a full XT bike. That PRO stem definitely has an interesting design but that’s nothing compared to the twisted tubes on the Lynskey. 🙂

great write up dgaddis. lynskey makes great bikes the two brothers if i am not mistaken owned litespeed bikes then got out of the buisness then started lynskey about three yrs. later. they really make great road bikes. love the titanium feel. and if you buy a custom frame you can get a one of a kind never done again custom paint job ($$$$) signed. just a great bike company.

I hope your rode the carbon Nine series HT. I got to take it for a spin out on the granite side and was pretty impressed with the ride characteristics. Would love to hear your thoughts on the comparison of frame characteristics between the carbon the titanium and the steel one you normally ride.

I rode a felt with full XT Saturday. I liked the fact that when shifting down, the trigger allows to to drop 2 gears a push. I wish the brake levers were longer and I wish the bike I rode had a larger rotor.

Anyway, I have used Shimano forever, and I had the opposite issue when I had the Sram-equipped Focus last summer. I about broke the shift lever off trying to ‘pull’ it like I do with my Shimanos.

I’m a middle finger braker, so I can still pull with my index when braking, but I use my thumb about equally. Basically whichever signal my brain sends, it works…

My new personal bike came with SLX in a 3×10 config and other than being heavier, the shifting is smooth and crisp like you describe with the XT.

I’ve been a fan of Formula brakes over Avid, but there’s a lot of buzz about the Shimano brakes. (more hint..hint) 😀