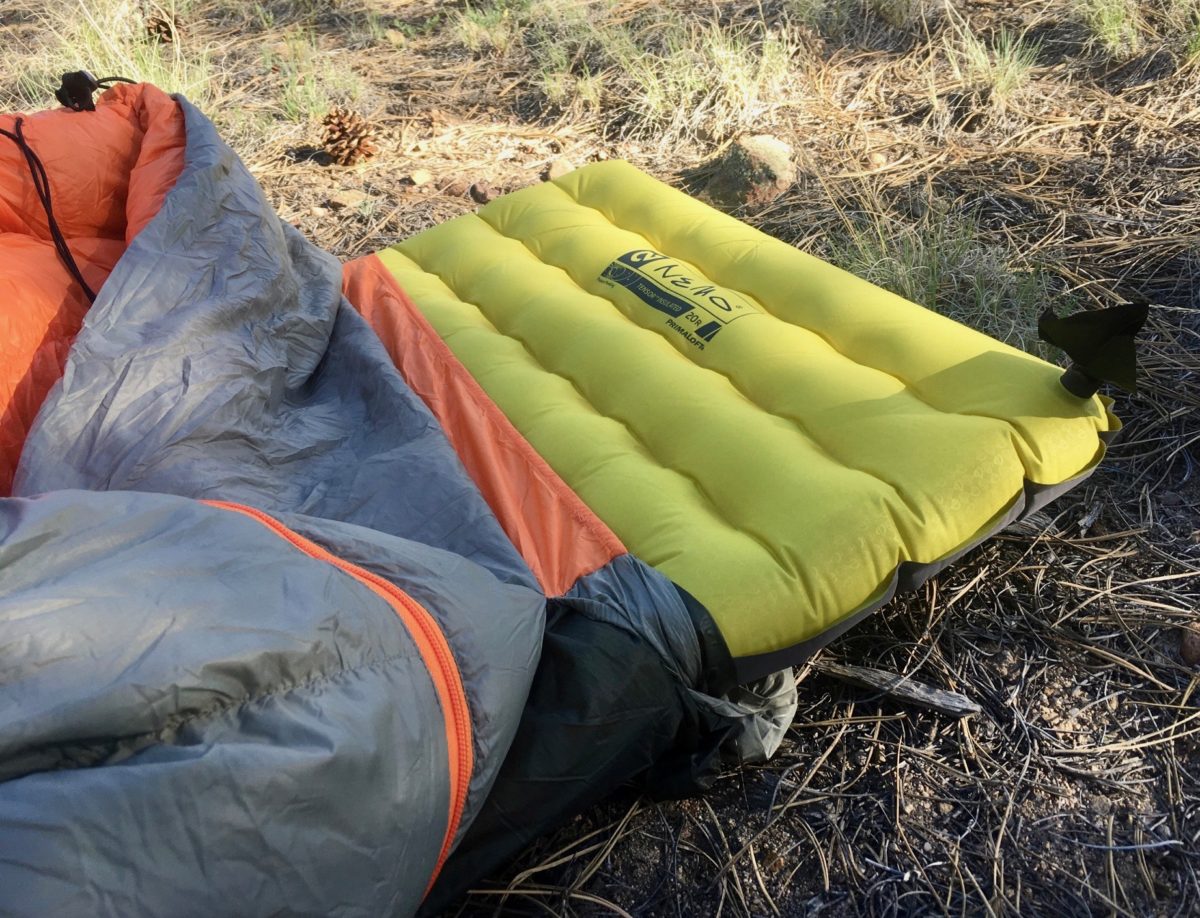 What would you say is the #1 reason that more people don’t go camping–especially backcountry camping, like backpacking or bikepacking? Discomfort while sleeping–or not being able to sleep at all–probably tops the list. Tossing and turning on the hard, cold ground with rocks and sticks poking you in the back is a tough sell when you could rent a cabin or hotel room with a luxurious king-sized mattress instead. Nemo’s innovative sleep system might just remove that major barrier to camping and bikepacking. 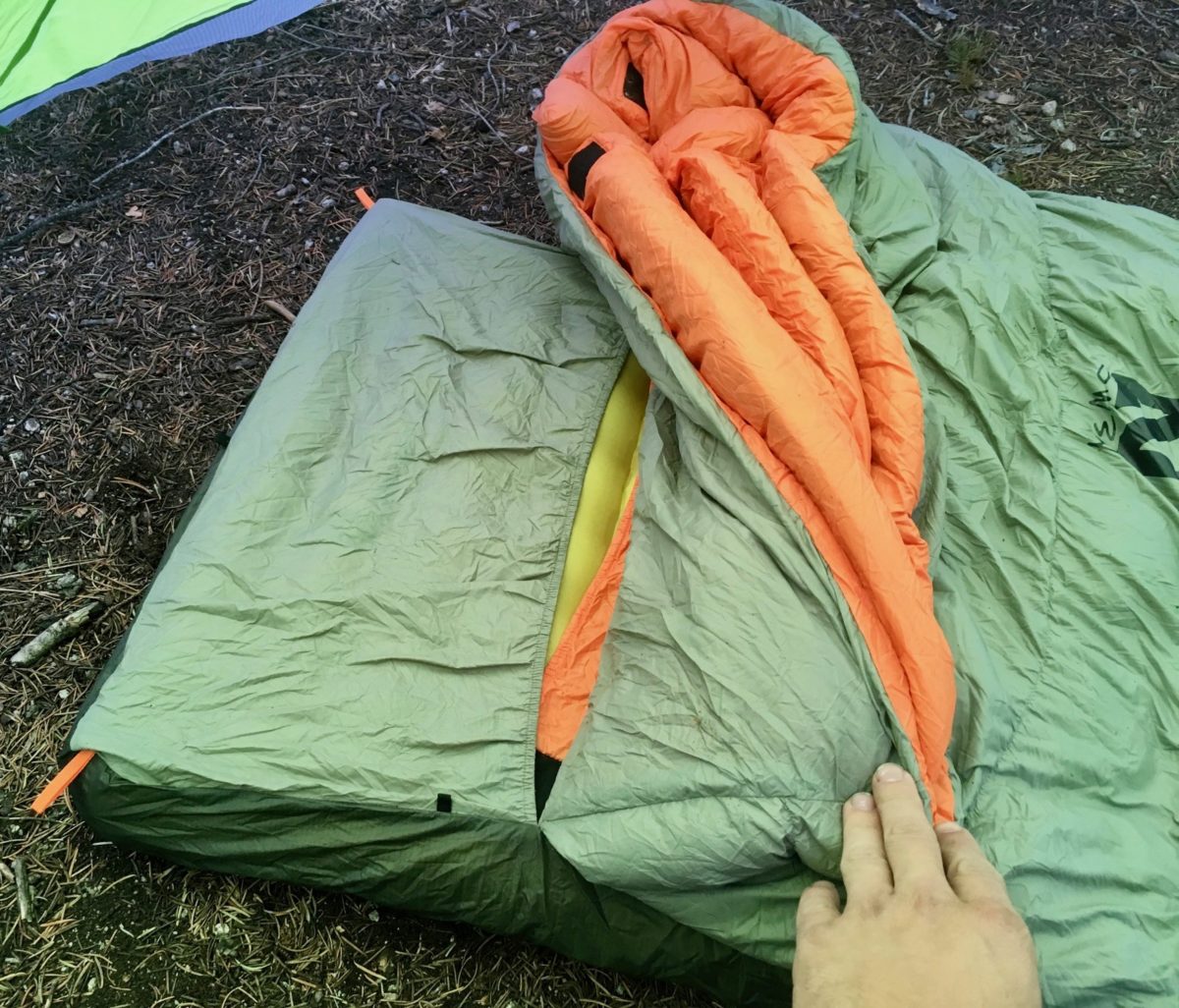 Nemo’s Argali sleeping bag and Tensor Insulated pad aren’t just two separate products, but rather two halves of one integrated sleep system. The innovative design sees the sleeping pad slipped into a sleeve in the bottom of the sleeping bag, connecting the two together. This prevents the sleeper (if you will) from rolling off the pad.

The bottom of the bag that holds the pad is a completely waterproof “tub design,” which is intended to be used directly on the ground–even if frozen or wet. This means that the weight-conscious bikepacker doesn’t need to carry a groundsheet when used with a floorless shelter like the Apollo 3P.

Here’s how this system stacked up.

While this is quite a cold-weather bag and it is designed for backpacking, it’s not very packable in terms of ultralight gear: it only compresses to 6.1L. 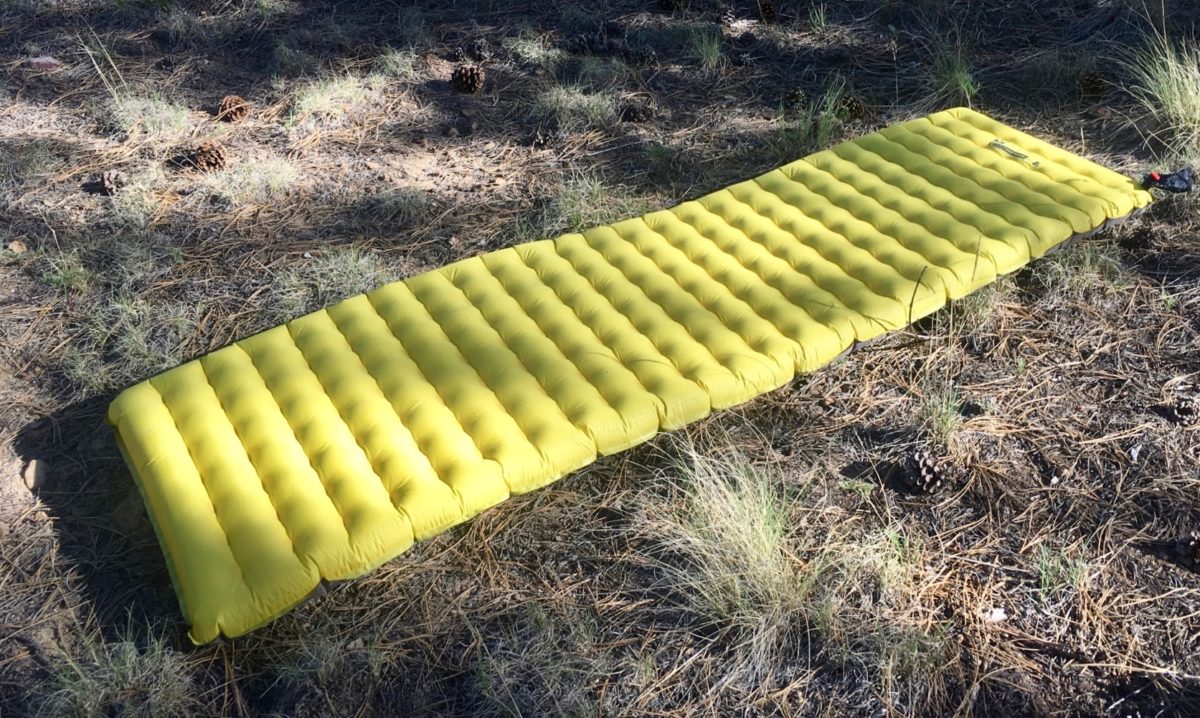 Nemo offers an entire line of sleeping pads, with multiple versions of the Tensor Insulated. The 20R model meshes perfectly with my Argali sleeping pad, sliding into the waterproof tub and securing snugly in place.

The pad features PrimaLoft and Aluminized Film to protect the sleeper from the cold of the ground, with a minimum temperature zone of 15°F to 25°F. 20D PU Polyester Ripstop has proven durable, although the protection of the waterproof tub also helps prevent any damage to the sleeping pad.

The pad weighs 15oz (425g) and measures a very comfortable 20″ wide and 72″ long, with an impressive 3″ of thickness separating the sleeper from the ground. 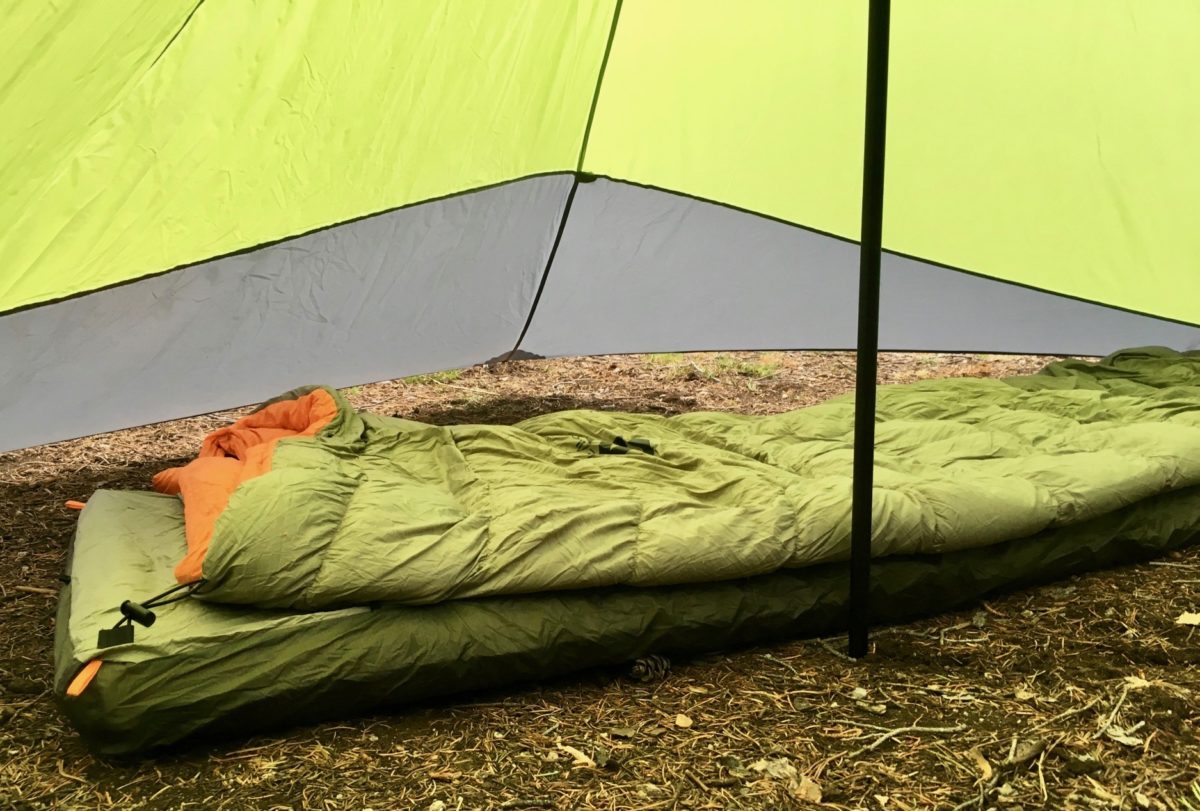 When I first set up the entire sleep system, with the Tensor Insulated pad securely inside the Argali sleeping bag, I couldn’t believe how ingenious the setup was. It’s the kind of integration and simplicity that makes you wonder, “why doesn’t everybody do this?”

Before I even received the Argali 15F, Nemo and I went back and forth a bit about the sleeping bag selection. They initially recommended the Moonwalk 30, which is a bit lighter at 2lbs 2oz and packs down smaller to 5L. It’s also a bit more affordable: $280 MSRP. However, I was absolutely freezing cold on several backcountry trips in 2016, even in the middle of the summer thanks to the high elevations we camped at in the Colorado Rockies. I opted for the warmer–and bulkier–Argali 15F.

I’m so glad I did! As a stark contrast to all of my 2016 trips, I was cozy and warm every single night that I spent in the Argali. In fact, I only slept in my base layers each night. I could have probably gotten away with the Moonwalk 30 on some of the warmer evenings, but the Argali’s promise of a warm night of sleep made getting ready for bed and leaving the warmth of the campfire much more palatable.

The design of the sleeping bag also aides in the comfort. While designed as a compact bag, the Argali was very spacious. While I only measure 5′ 7″ tall, I have broad shoulders for my height and some mummy bags can be a tight squeeze. I found the Argali to provide plenty of room to move around in, and to be long enough that I could pull it all the way over my head on cold nights.

It’s possible that the roominess is intentional and even necessary. Since the sleeping pad is integrated into the bag, you can’t roll independent of the pad as you might in a tighter mummy bag. But the pad integration further proved its worth.

The three-inch-thick Tensor pad is lavish, providing very welcome padding between my body and the ground. Even when turned on my hip, I wouldn’t push through the pad and hit the dirt. In fact, I could easily blow the pad full enough with air that it would be uncomfortably stiff–I often had to let a bit of air out to provide the perfect blend of support and protection from the ground. In my experience, this is unusual with a backpacking pad. 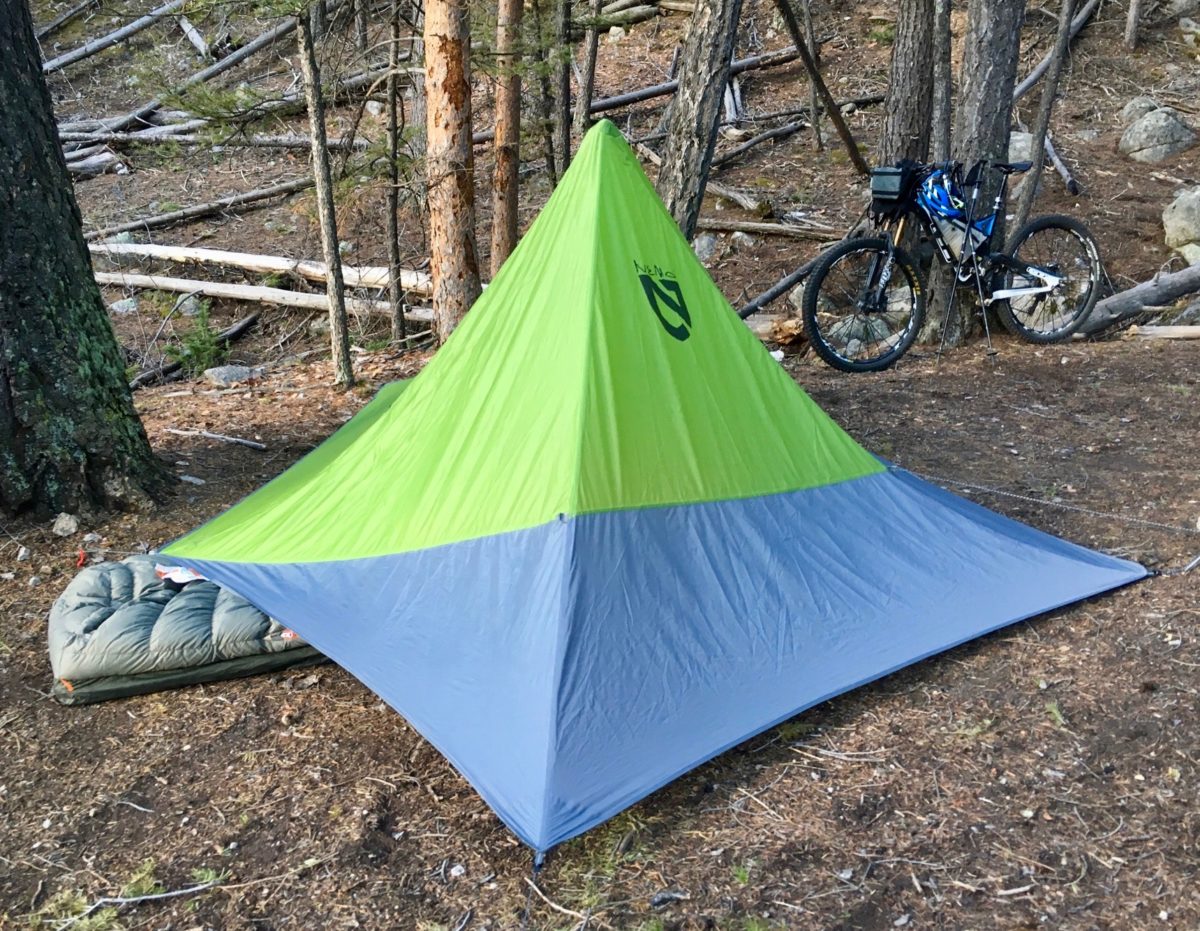 While the integrated design prevents the sleeper from rolling off the pad–which I often do on narrow, minimalist pads–if the sleeping area isn’t perfectly flat it’s possible that the entire sleep system can slide–I even slid out from under the edge of the shelter once. If you find yourself sliding a lot, the corners of the bag do include small loops so you can stake it in place. I also found that the three-inch sleeping pad height meant I could slide off the edge of the pad a bit, held in place by the side of the sleeping bag. 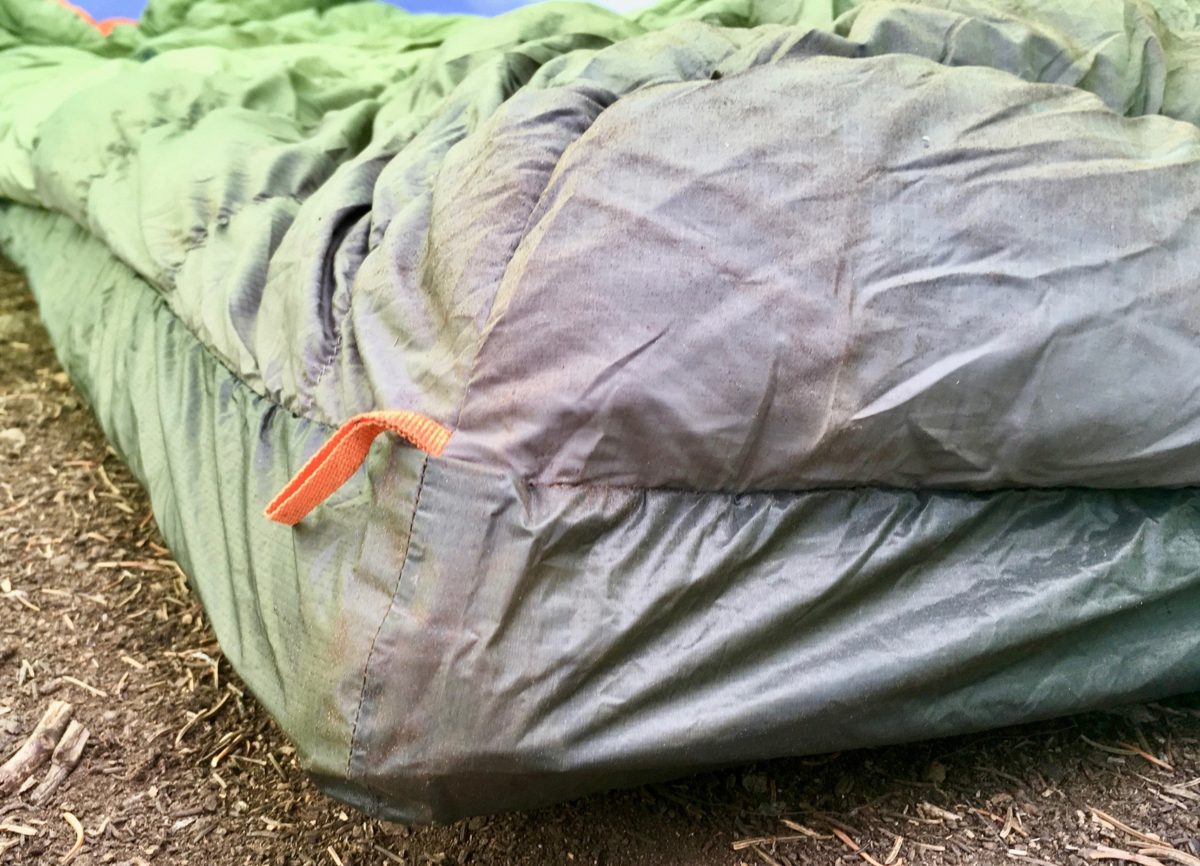 One potential downside of this system — and one answer to the question, “why doesn’t everybody do this?!” — is that you can’t use the Argali sleeping bag with just any pad. The bag doesn’t have any down on the bottom side — it relies on the pad for its insulation, which is why choosing an insulated pad like the Tensor is mandatory. In essence, this system is much more specialized and proprietary than your standard sleeping bag. That proprietary nature provides all the benefits I mentioned above, but means it is less interchangeable. 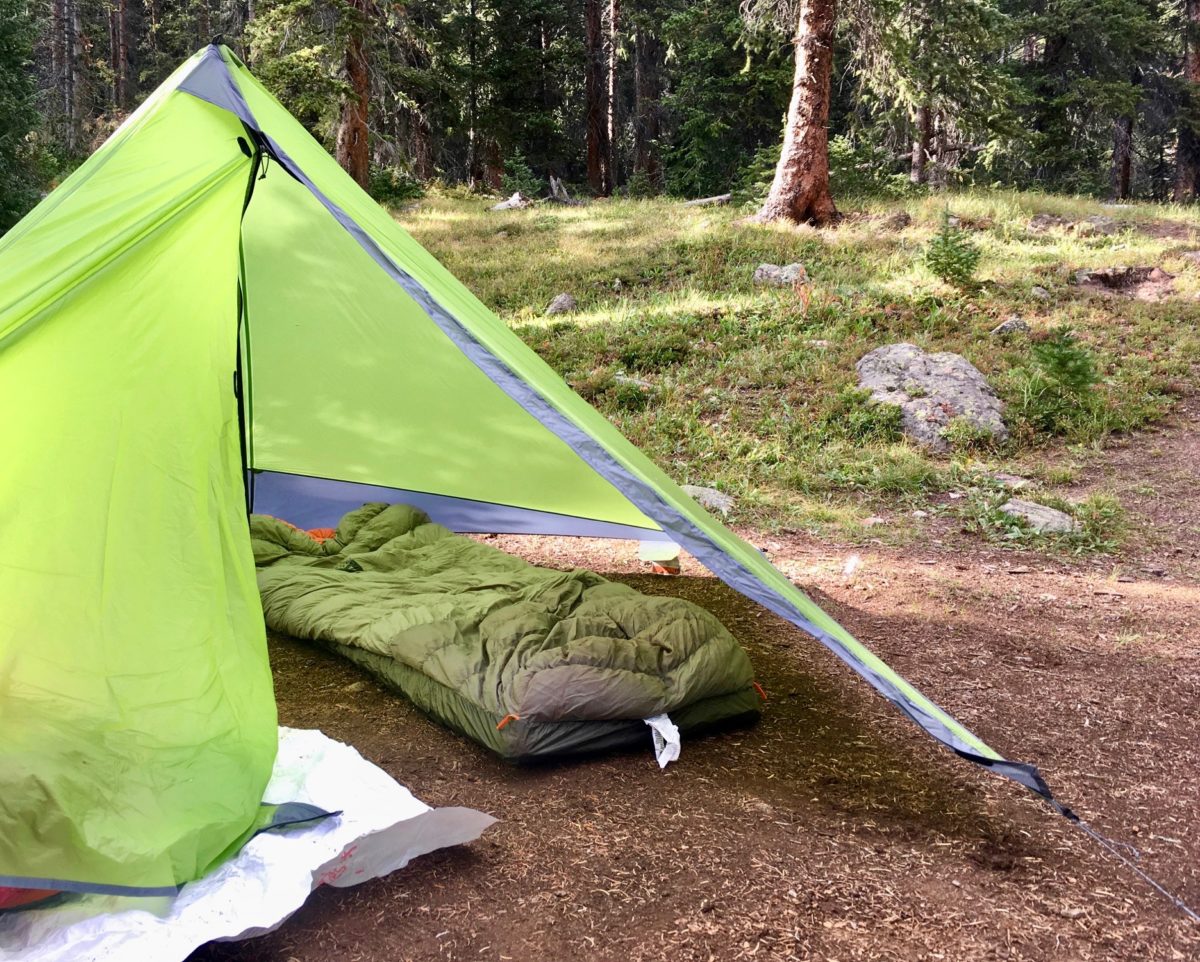 While not excessively heavy, this sleep system from Nemo is just not very packable. This is partly due to the 15F rating and the amount of down in the bag, and partly due to the bulk of the waterproof tub and the 3-inch thickness of the pad. If you’re trying to go as ultralight as possible and as fast as possible, with sleep being a secondary requirement to the amount of time you spend in the saddle, the Nemo Argali sleeping bag plus the Tensor Insulated sleeping pad probably isn’t for you.

That said, the waterproof tub bottom of the sleeping bag made me wonder why I even bothered with a shelter at all. If the chance of rain is nonexistent–for instance, if bikepacking in the desert–I could easily see using the Argali + Tensor under the stars and having a perfectly-comfortable night. Dropping the 2lbs of the Apollo 3P shelter and simply opting for the bag and pad alone would make this sleep system competitive with the best.

But if you aren’t trying to win a bikepacking event and instead need to log restful sleep during the night in order to make it through the next long, strenuous day of riding, I don’t know if you can do better than Nemo’s sleep system for warmth, comfort, and simplicity.

If actually enjoying your bikepacking trip is a priority, this sleep system from Nemo Equipment is for you.

Thanks to Nemo Equipment for providing the Argali 15F sleeping bag and Tensor Insulated 20R sleeping pad for review.

Sponsored
Brevard, North Carolina is a Mountain Biker's Paradise
Community
These Women Saw a Void in the MTB Apparel Marketplace...
Gear
Quick Question: How Do I Know When it's Time to...
Gear
The Budget-Friendly 2021 Schwinn Axum DP is In for Test
Subscribe
Login
Please login to comment
1 Comment
Most Voted
Newest Oldest
Inline Feedbacks
View all comments

Thanks for sharing Greg. I am going to look into the sleeping pad. I have a shot lower back and can’t handle more than 2 nights on my thermarest. A comfortable sleep pad could be the game changer for longer adventures.