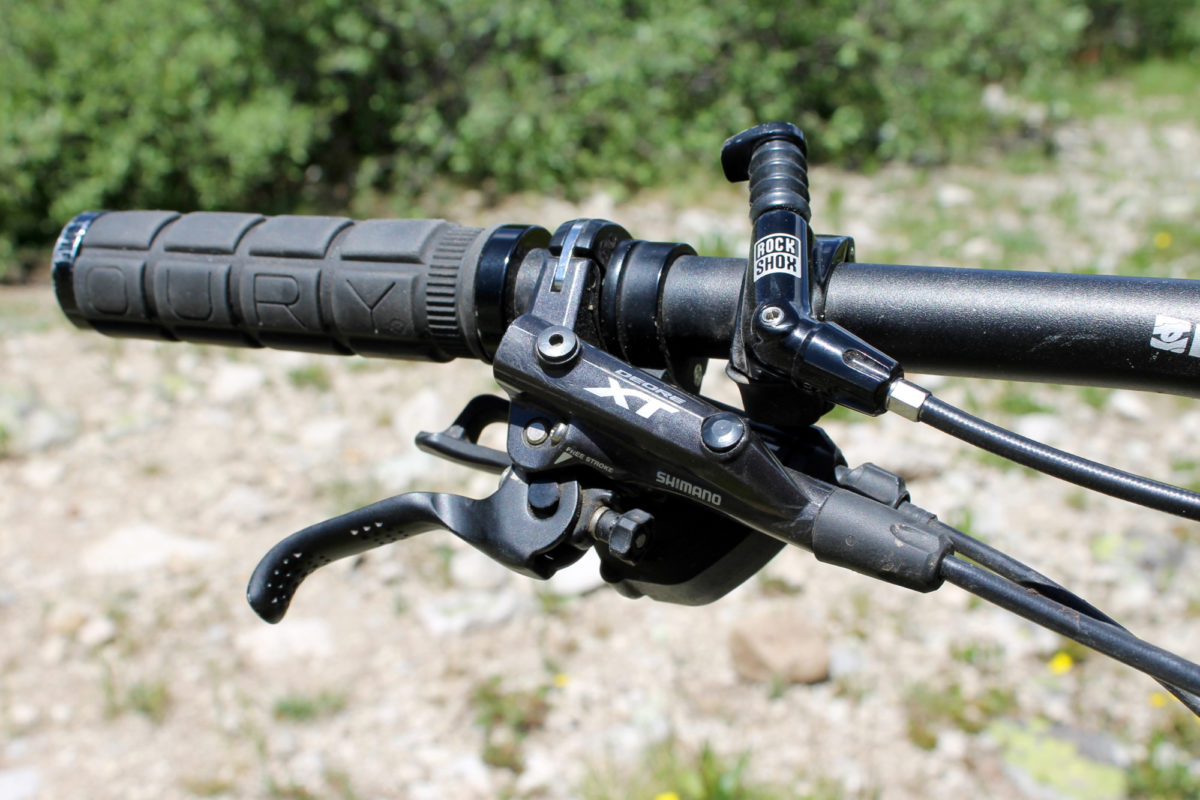 The brakes that came as a stock spec on my GT Force Carbon Pro were fraught with durability and reliability issues. When they were in good working order, they worked well–but they required constant maintenance to keep them functioning properly. So, I reached out to Shimano to get a set of the brand-new 2016 Deore XT M8000 brakes for review. I had significant experience on the previous model of XT brakes, and thought that a brand-new set would be my silver bullet to worry-free braking and zero maintenance. 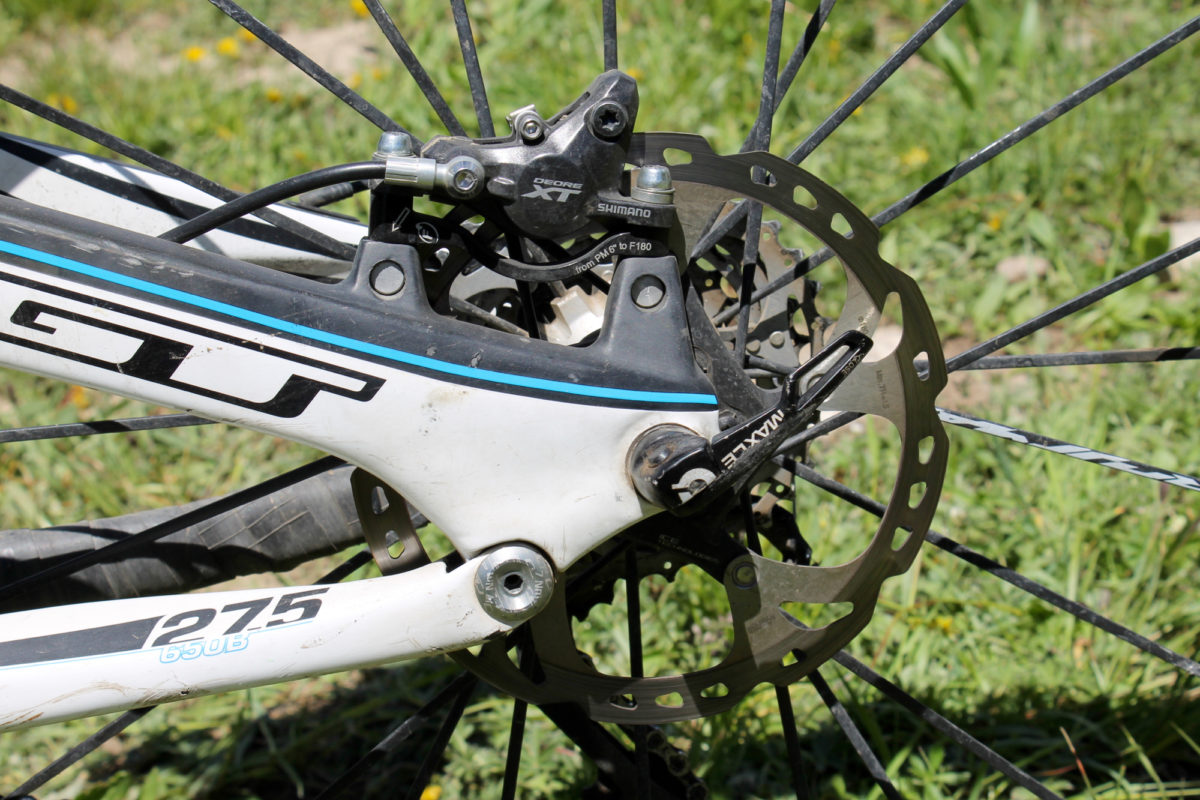 I have been testing the 2016 Deore XT M8000 brakes (referred to simply as “XT” below) for about a year and a half now. You might rightly wonder why I’d need to test a pair of brakes so worry-free as the XTs for so long before writing about them. And the answer is simple, yet will require some explanation: I found the latest rendition of Shimano’s XT brakes that I was testing to lack the reliability the brand is known for.

Read on for a detailed analysis. 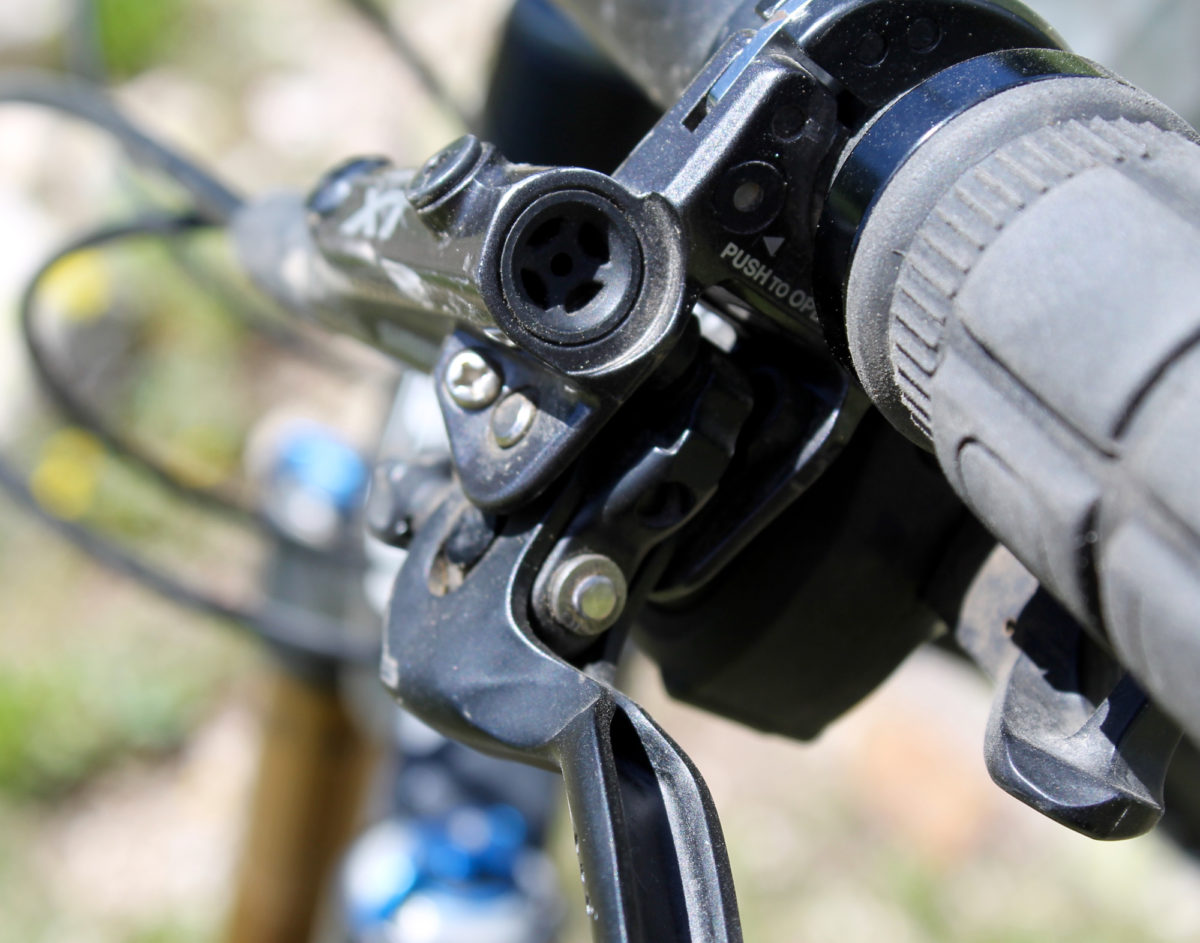 The new XT M8000 brakes borrowed technology from the higher-end XTR brakes, and introduced a new integrated master cylinder at the XT level. This new cylinder is supposed to both perform better and save weight. Ceramic pistons provide maximum power and heat dissipation. The Servo Wave lever and pull has also been refined, and the tool-free reach adjust knob is super easy to twist on the fly, providing a perfect fit in the rider’s hand.

Weight is a claimed 277g per brake.

Over the course of the past year I’ve logged hundreds upon hundreds of miles on the latest XT brakes, including endless brake-burning descents down 14,000-foot mountain peaks, bashing through endless rock gardens, sailing through deep mountain streams, and drowning them in mud. These brakes have been punished, maintained, and then throttled, beaten, clenched, and generally used and abused, in an effort to see what they’re made of.

And most of the time, when they’re working, they’re working well. Braking power is plentiful in all situations, with generous modulation to provide everything from quick deceleration to slight speed adjustments before entering a turn or rock garden. The fact that I made it through this endless stream of abuses alive means that the XTs are still quite a decent brake, and in fact are still a significant upgrade over the previous Formula T1 brakes that came on my GT Force. 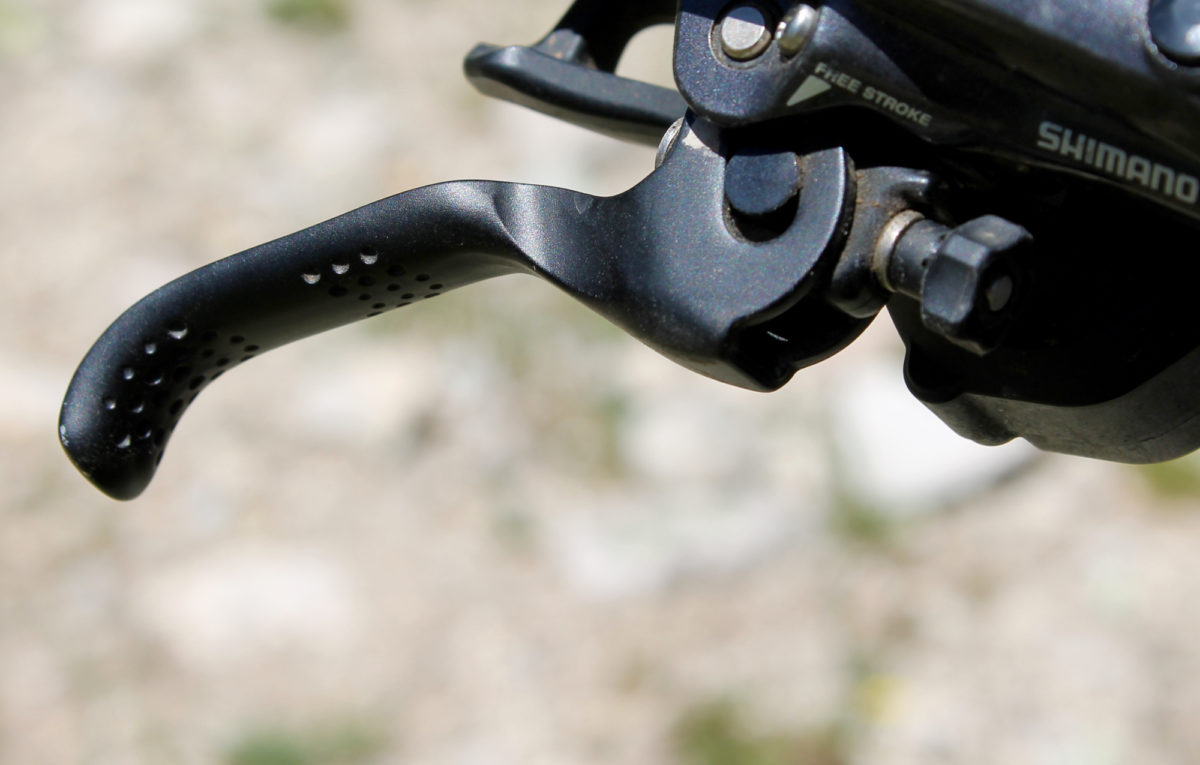 Perhaps my favorite feature of the new XT brakes is the feel of the lever. The dimpled finger grip cups an index finger perfectly, providing plenty of purchase with just one digit. The easy-to-adjust reach knob is a great feature that I wish came on much cheaper brakes in the Shimano line as well. It also looks and feels to me like the lever itself has been lengthened from previous models, which provides a bit better throw, and provides more room and a better position on the bars for my own setup. 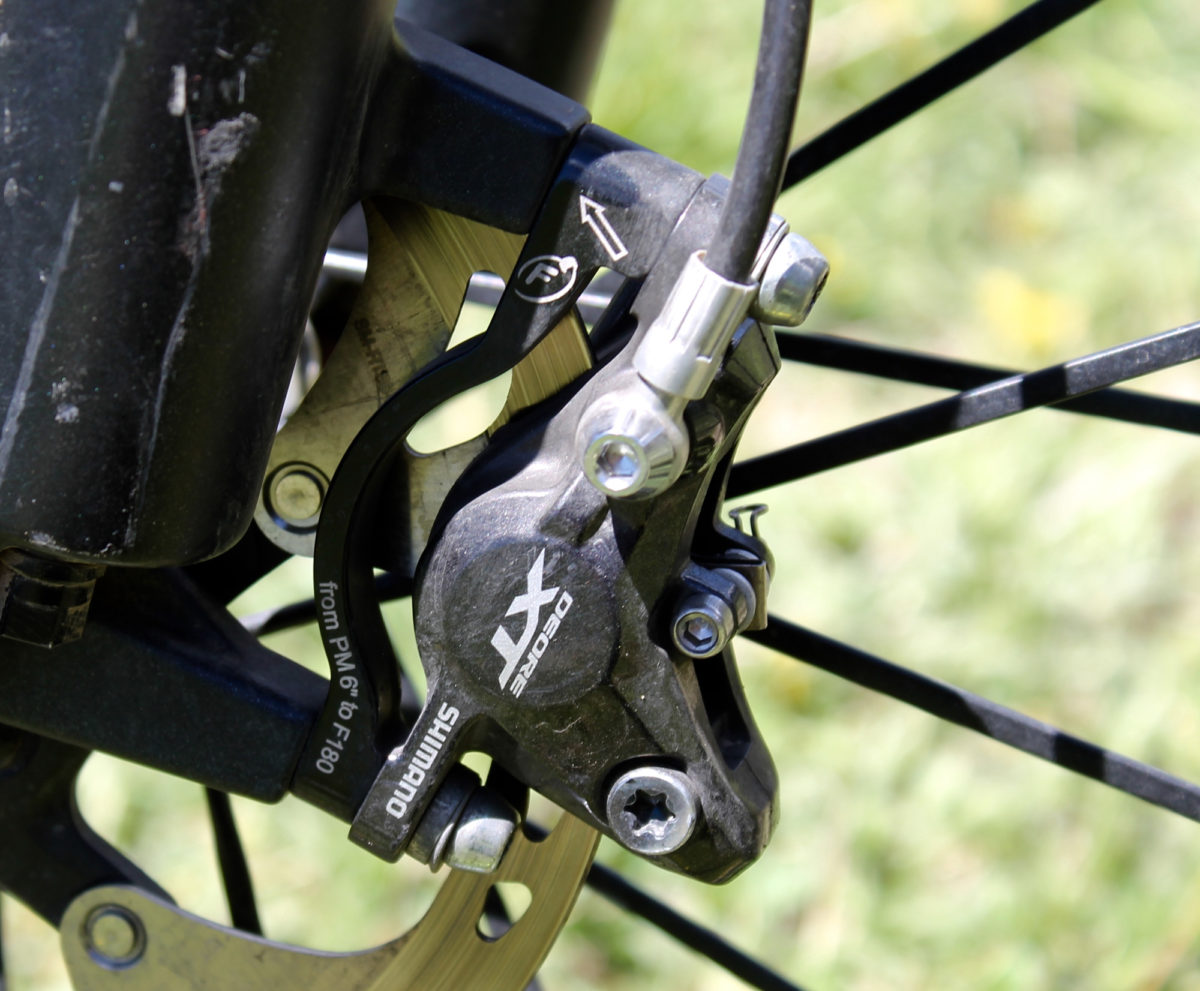 And yet, the XTs were still a letdown when compared to previous versions of the brake. While I found the power to be increased over older models, the latest rendition that I was testing isn’t nearly as bulletproof as the previous XT model. I’m used to having to perform absolutely zero maintenance on XT brakes. I’ve burned through a set of pads in older XTs, pushed the pistons back out, swapped the pads, and continued on–and on, even into the third set–with no maintenance required for the brakes themselves. No bleeding. No adjustment. Just swap the pads, and keep on riding.

However, with the latest XT 8000s, I’ve had these brakes bled at least 3 times over the course of one pad cycle. Once, the brakes developed sogginess and had to be pumped up to work, requiring a bleed.

Another time, when I tore my ACL, I left the bike standing in my garage for two months, only to come back to it to have absolutely no brake power whatsoever–a problem that I don’t experience on the much cheaper Shimano M396 brakes on my Scott Big Jon fat bike, despite that rig seeing over 6 months of no use over the summer.

And finally, during a descent off of a 14,000-foot mountain peak, I experienced a weird sensation where I pulled through the entire lever stroke, even after locking up the rear tire. It turned out that the brake hose had failed, but not from a rock strike–the internal liner had failed, with the brake fluid bubbling out, causing a loss of braking power and firmness. Thankfully, Shimano warrantied this issue.

These are big issues, which required money out of my pocket for maintenance, and time off the trail for my bike. But even during daily use, the XTs provided hints of their unreliability. Some other publications, like BikeRadar, have complained about “inconsistent lever feel issues.” I found over the course of my lengthy test that I normalized this issue. While it’s something that can be adapted to (a quick pump of the lever before hard braking is required), when I jumped back to my fat bike this fall and the cheap M396 hydraulic brakes that came as the stock spec, I realized that I had truly been missing a consistent, firm lever feel–and these relatively inexpensive Shimano brakes provided it with zero maintenance required, while the more expensive, newly-redesigned XTs did not.

Since my test has been focused on one specific set of brakes over a long period of time, I turned to my colleague, Aaron Chamberlain, for some more feedback on this matter. Aaron has been conducting many more bike review tests this year than I have, and many of the test bikes have had Shimano’s XT drivetrain and brakes spec’ed as a stock option. Here’s Aaron’s take from riding a variety of XT brakesets over shorter periods of time:

On some of the bikes, the brakes have been flawless from the beginning of the test to the end. However, on other bikes, I have had issues with inconsistent performance. Specifically, the bite point of the brakes can change from ride to ride, or even during the same ride. Sometimes it takes very little lever pull for the pads to engage, while other times the lever comes much closer to the bar. The majority of the XT brakes I tested have been solid, but multiple sets have had issues.

It seems clear from Aaron’s analysis that my issues aren’t isolated to my set of brakes.

I also got in touch with Shimano about these issues, to get their analysis of the situation. According to Shimano, the set of test brakes that I received was part of an early production run that they’ve experienced some issues with–specifically, the brake lever position change while riding that both Aaron and I experienced.

At the end of the day, did the latest XT M8000 brakes that I was testing fail so spectacularly on me that they left me walking down the trail to get out of the mountains? No, they didn’t. Did they require maintenance every month, like my Formula T1s? Nope, they didn’t do that either.

But if that’s the bar we’re setting for reliability, that bar is pretty low. 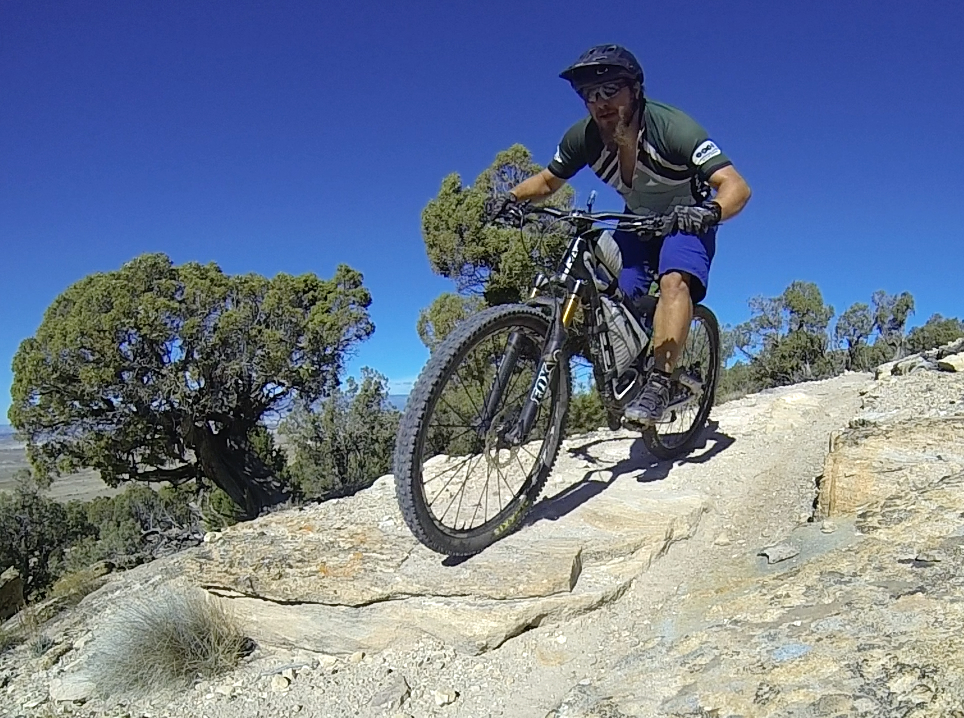 Thankfully, Shimano isn’t content with that bar, either. They truly believe that my issues arose from an early run of the brakes that suffered from reliability issues, so they’re shipping me a brand-new set of brakes to put through the wringer. While it will take some time to adequately test this latest set, stay tuned for an updated review with my findings.

Thanks to Shimano providing the XT brakes for review.

Great Article….on my FAT bike I stay away from hydraulics. On my suspension bike I run Shimano SLX, nothing fancy but they get the job done and are relatively easy to work on. On my FAT bike, I keep the stock AVID mechanical. No matter what goes wrong, I am pretty sure I can get them working. It is a lot easier to replace a cable on the trail than fix a hydraulic system. Multi day rides, I’m sticking with cables! When I first saw the AVIDs I put them on the list for a quick upgrade but after using them I was kinda shocked how good they are. FAT bike….yeah, I’m sticking with mechanical. Bleeding the brake system isn’t that hard and it has gotten a LOT easier but it is still a PIA!

Wow have to say I’m surprised happy that Shimano does care though!

I’m interested too on the ongoing test of the replacement brakes. Did you have any issues so far?
Thanks